Two Second World War historic boats that made an extraordinary contribution to naval warfare, have been painstakingly manoeuvred into place to take centre stage in a major new permanent exhibition which opens this Autumn at the National Museum of the Royal Navy’s (NMRN) Explosion Museum in Gosport.

Immortalised as 'Spitfires of the Seas' the boats, Coastal Motor Boat CMB331 and Motor Torpedo Boat MTB71, were often deployed in the dark, at incredibly high speeds as small but fast attack motor boats which carried torpedoes. It was a branch of the Royal Navy commonly manned by very young men, often reservist volunteers, in wooden craft, heavily armed carrying ammunition, explosives and high-octane fuel as they went in to attack enemy naval forces at close range.

Accustomed to travelling at a faster pace, CMB331 and MTB71 made the 100-mile journey by road under escort at a more sedate pace from the NMRN’s Fleet Air Arm Museum, Yeovilton, where they have been stored.  Now carefully positioned, work can commence on fitting out the exhibition located in the historic former mine store built in 1899 at Priddy’s Hard, the armament depot that supplied weapons, ammunition and equipment to the Royal Navy which is now home to Explosion Museum.

Nick Hewitt, Head of Collections and Research said: “It’s an incredible opportunity to pay tribute to these boats and the crew who manned them by putting them at the very centre of our exhibition. Our visitors can see them up close and marvel at just how perilous their tactics were, stealthily travelling at high speed, often in the dark, and get a sense of the real risks these young men took.”

Details on the exhibition’s opening will be announced soon. Pre-bookings are essential, now available on www.historicdockyard.co.uk.

Additionally you can read about the the National Museum of the Royal Navy and the opportunities available as part of the Shipshape Network here. 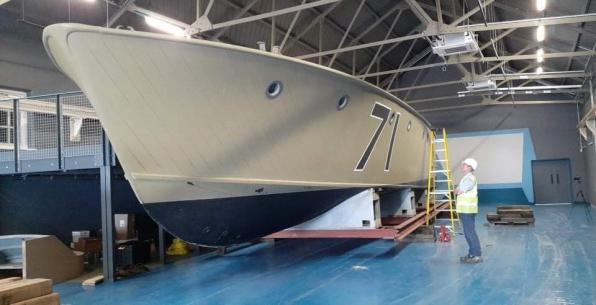