HMS Trincomalee, the oldest warship afloat in Europe, has received a fresh look this summer through an ambitious repainting project. The repaint has spruced up her exterior while making small alterations, creating a look even more accurate to when she first launched nearly 205 years ago. This work has also made the ship less vulnerable to the weather, making it crucial to her preservation.

HMS Trincomalee - now the main attraction at the National Museum of the Royal Hartlepool (NMRN) - was built in India for the Royal Navy in 1817.

It took seven painters five weeks to complete the job, three of whom used rope access to hang over the edge to paint the sides of the ship. The shopping list for their mammoth task included 600 litres of primer, 115 litres of black, 50 litres of white, 10 litres of green and 10 litres of maroon paint, and last but not least, 2500 gold leaves.

The exterior of the ship was painted in the historically correct shades of black and a creamy white. These shades were inspired by a paint analysis of another 19th century vessel in the historic fleet of the NMRN, HMS Warrior, which was famously restored in Hartlepool. Traditionally, the Royal Dockyards used the same stocks of paint for all ships of the same colour, meaning these shades are accurate for HMS Trincomalee as they are for HMS Warrior.

Industrial Coating Services, who undertook this painting for the NMRN, added a modern twist in the history of the Royal Navy to this project: their expertise includes painting HMS Queen Elizabeth and HMS Prince of Wales, the navy’s two newest aircraft carriers.

HMS Trincomalee’s repaint also included a traditional creamy white line through the gun decks, common in early warships. The bulwarks of HMS Trincomalee were painted a light green colour while the inside of the gun ports were painted dark red. Gilding was applied to the ship’s name on the stern, and to the catheads, the cats’ face carvings on the ends of the timbers which hold the anchors to Trincomalee’s sides.

Clare Hunt, Senior Curator for the NMRN, says: “Of course, HMS Trincomalee looks even more magnificent following her paint job but, perhaps even more importantly, her protection from the weather has been improved. Included in the painters’ tasks was a significant amount of re-caulking of the ship’s sides, meaning that seams which have failed and were letting in water, have been sealed again. It is just one of the important cycles of maintenance carried out by the National Museum of the Royal Navy in order to preserve this lovely ship.”

The National Museum of the Royal Navy Hartlepool is now open every day 10am – 5pm, pre-booking is essential, find out more on: https://www.nmrn.org.uk/our-museum/hartlepool 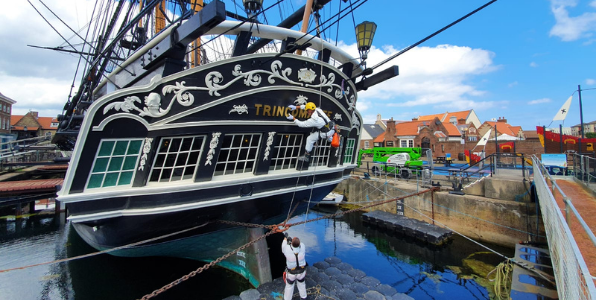