The historic figurehead from HMS Trincomalee, a 200-year-old sailing ship and the magnificent centrepiece of The National Museum of the Royal Navy, Hartlepool, is to undergo a long-awaited, professional restoration.

HMS Trincomalee, the oldest warship still afloat in Europe, was built of teak in India for the Royal Navy in 1817 and travelled over 100,000 miles in all extremes of climate.

Figureheads are the carved wooden sculptures that decorate the bows of sailing ships and were often believed to be the “soul” of a ship, offering good luck and protection from perilous journeys.

This figurehead from HMS Trincomalee dates from 1845.  It was carved by Hellyer & Son, the best known carver of the Portsmouth Dockyard and depicts a turbaned man, believed to represent a native of Sri Lanka where Trincomalee is a port.  The turbaned figure was a commonly used design for ships built in India or named after regions of the subcontinent.  The original 1845 design, drawing and paperwork for the commission survives in the National Archives in the Admiralty collections, along with drawings for 250 other figureheads by the same makers. It is believed the original 1817 figurehead must have succumbed to the weather.

When HMS Trincomalee was brought to Hartlepool in 1987, it was intended to keep the figurehead in place as there was no sign of the extensive internal decay that drill testing later revealed.  It was then removed, placed in storage and replaced with a modern copy until sufficient funds could be raised for its professional restoration.

The National Museum of the Royal Navy, Hartlepool is now delighted and very grateful to announce that Art Fund, the national fundraising charity for art, has awarded £30,000 towards the restoration of the priceless figurehead.  In addition, The Friends of HMS Trincomalee (a registered charity run by volunteers to help the preservation, exhibiting and promotion of the ship) have pledged £25,500.  These grants combined with previous smaller donations, have created the necessary funds to allow the restoration and display of the figurehead to be taken forward.

Months of painstaking repair work by expert, accredited conservators must now be undertaken including timber and paint analysis, replacement and re-carving of decayed timber, preservation of original carved detail, removal of paint, reinstatement of colours and much more.  The work is expected to be carried out off-site between February and June and then the newly renovated figurehead will be wall mounted by the conservators in the HMS Trincomalee exhibition space, complete with appropriate graphics, interpretation and lighting.

Clare Hunt, Curator from The National Museum of the Royal Navy, Hartlepool says: “We are delighted to be able to get this object, which is so significant to the history of HMS Trincomalee, restored and on display. Even in his present state, the figurehead is an engaging and colourful character who I’m sure our visitors will fall in love with!” 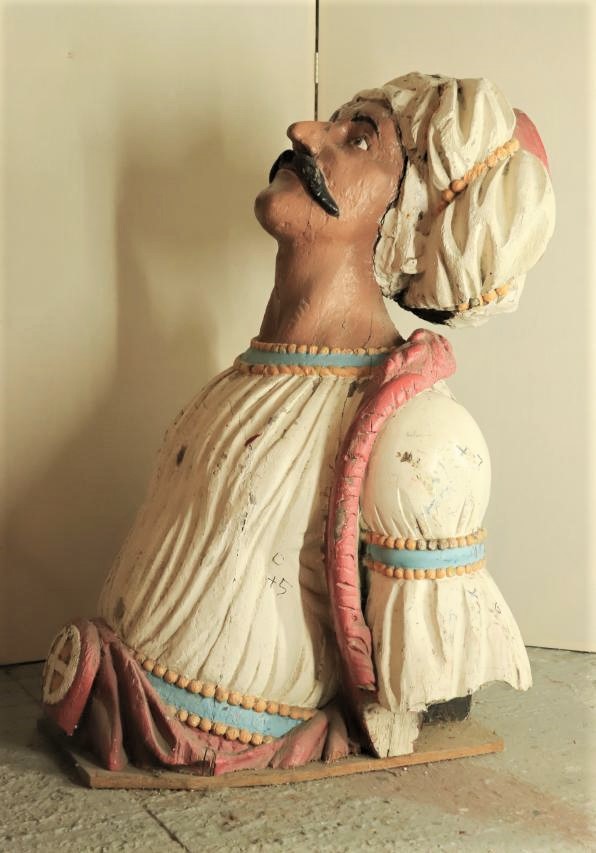