Manx National Heritage's Conservator has been working on a 3D drawing of Peggy, one of the most significant objects in their collections.

Peggy is the only surviving example of a small wooden yacht once found in their thousands around the western British Isles.  She is very well-preserved, with original paint, masts, tiller, gaff and guns.

She was fitted with drop-keels; an experimental innovation in 1789.  No other boat survives from that period with them.  She is one of the oldest wooden boats to survive and one of few that are not naval vessels.

Uniquely she has her own dock and boat house, and a wealth of documents associated with her. Her owner, Captain George Quayle, was a person of significance on the Isle of Man and beyond.

Chris is drawing every single timber in 3D using a computer aided design package (CAD). Using the resulting CAD model it will be possible to strip-away repairs and additions, move the masts and benches back to their original positions, and reconstruct Peggy’s original racing lines. They can reinstate her oar ports and her sliding keels, and simulate how she handled and floated. Once complete, the CAD model will be used to reconstruct her rig.

Find out more about Peggy and Manx National Heritage, one of our Shipshape Network North West Projects 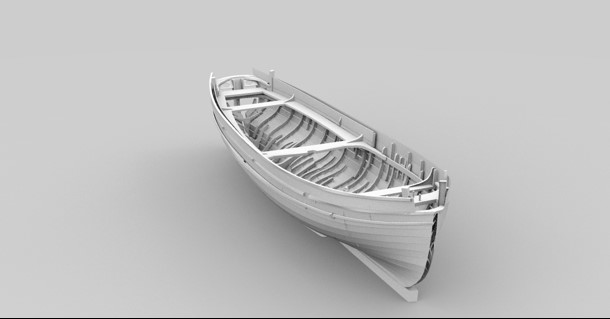