Lots of news, activity, and inspiring ideas to report, but of course no sailing at this current time. Many Sail Training organizations have simply shut up shop and gone home but we are intent on maintaining our skills base.

With no charter income, we are working flat out on grant applications to ensure that we are in a position to celebrate Excelsior’s 100th birthday in 2021. In comparison with many other Sail Training organizations, our overheads are extremely low but we are under considerable financial strain. We are stepping up our social media presence including producing a promotional video and will shortly be launching a crowdfunding scheme to help enable us to stay afloat. Any support you can offer at this incredibly difficult time, either financially or suggestions on possible avenues of funding will, of course, be gratefully received.

Please keep an eye on our website and our social media presence for further updates.

We have another fantastic crew combination this year. Skipper Nick Dwyer recently joined us, shortly before lockdown. National Historic Ships Apprentice Bosun Belinda Cree is also on board, as is First Mate Isaac Erdman. At the time of writing this newsletter, relief Skipper and winter maintenance supervisor Karol Petryka is on paternity leave, having had the recent joyful addition of baby Adam to the family. Nick, Isaac, and Belinda are all multi-talented and are also contributing their skills outside sailing to The Trust. Many a brainstorming session has been held on how to continue to function and we are fortunate indeed to have them. 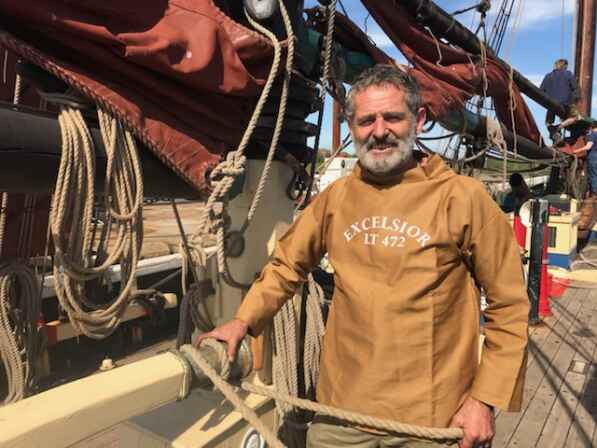 Nick built his first boat at the age of 14 and has been sailing for over 50 years. He has a degree in international finance and investments and a Diploma in computer science. He holds a commercially endorsed Yacht Master certificate and is also a Royal Yachting Association Cruising Instructor. Prior to leaving the rat race, Nick ran his London based management consulting firm, a Dublin based investment firm, and some other commercial interests. In 2007, having put his child through university, Nick bought a replica of Joshua Slocum’s boat “Spray” and set off on a solo circumnavigation without modern conveniences like a depth sounder or engine.

He has lived on the boat for the last 13 years while he cruised extensively mostly in the southern hemisphere. He has escaped from pirates off Colombia, survived a Tsunami in French Polynesia, re-floated his boat after being shipwrecked on a remote Fijian island, capsized three times in the Tasman Sea and met his wife in Tonga. They have visited remote islands and peoples of the world only accessible by private boat. His involvement with assisting those in need commenced in the 1980s when he kept a spare room in his house for recovering drug addicts. More recently he Skippered the Queen Galadriel. and he joins Excelsior knowing that the life direction of many young people will change in a very positive way. Nick brings vast experience and a safe pair of hands to the tiller of Excelsior.

Isaac has volunteered with Excelsior since 2015, having worked through the ranks in Greece obtaining his Yacht Master qualifications, he is now ready to take the helm with Excelsior. With great skills in working with young people, and getting the most out of the ship, he is well placed for life at sea. Isaac shares the crew’s energy and passion for Sail Training, foraging and preservation of Excelsior. He’s a valued member of the team and has been heavily involved in our winter maintenance plan. 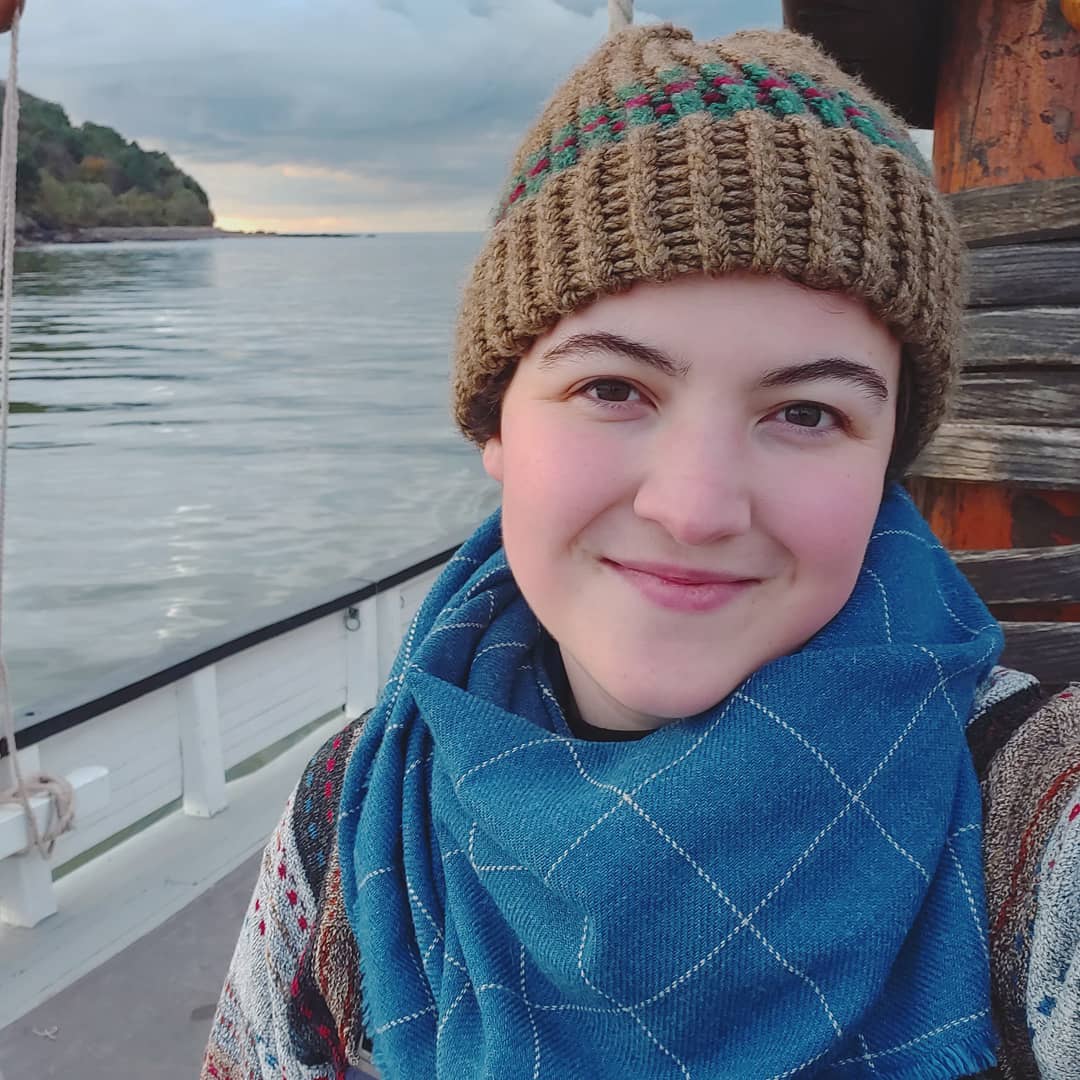 Belinda is new to Excelsior, joining the crew this year as a SHTP2 trainee supported by National Historic Ships. Originally from Northern Ireland, Belinda had no previous sailing experience until after graduating from university. Then, in 2018 she completed her Competent Crew and hasn’t looked back! With an OCN in Youth work and the new skills, she’s picked up studying at IBTC, she’s excited for a season of looking after Excelsior and helping young people to get the most out of their experience onboard.

Due to problems with the slip at Harbour Road, Excelsior paid a quick visit to Grimsby to be slipped. We were overwhelmed by the offers from volunteer support crew which had folk coming from far and wide to help with this trip. The power of social media in this instance was breath-taking. Our short-notice request for volunteers on Facebook to help with the voyage to Grimsby was seen by over 16,000 people, engaged with by over 1000 people, and liked or shared by over 500 people. We ended up with 8 volunteers making themselves available within just 3 days.Our talented crew have also made a new bowsprit from larch sourced in Yorkshire.

We are delighted to have new Trustees and Management Committee members who have recently joined us. We offer a warm welcome to them all. 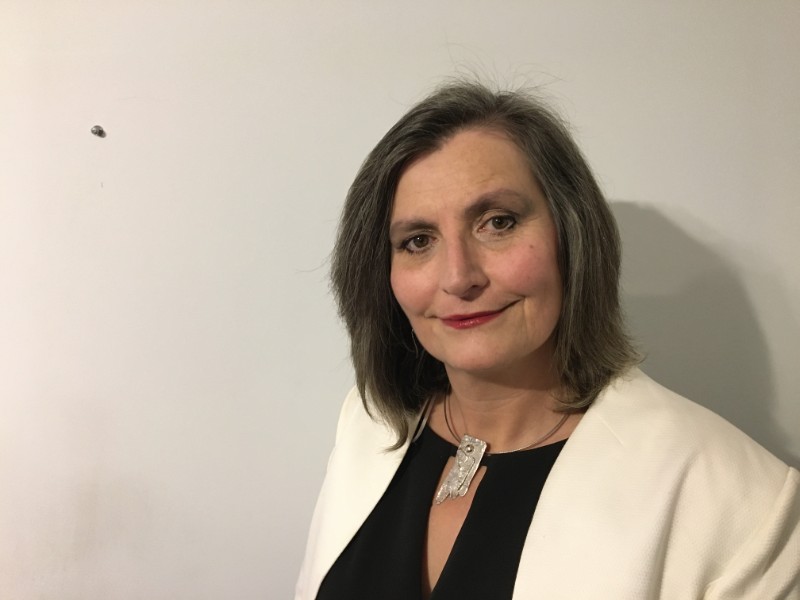 Mary was introduced to boats by her now husband Simon, and has lived on their barge for the last 10 years. She really enjoys being on and around the water and has recently improved her sailing skills. Mary spent many years working in education, 8 years as a Headteacher until her health meant she had to find less stressful employment, and now works alongside her husband in their boatyard, Hippersons in Beccles. Mary is passionate about providing opportunities for children and young people to experience activities that are not readily available to them. She believes Excelsior provides an amazing adventure will create memories and open doors for all who sail on her. 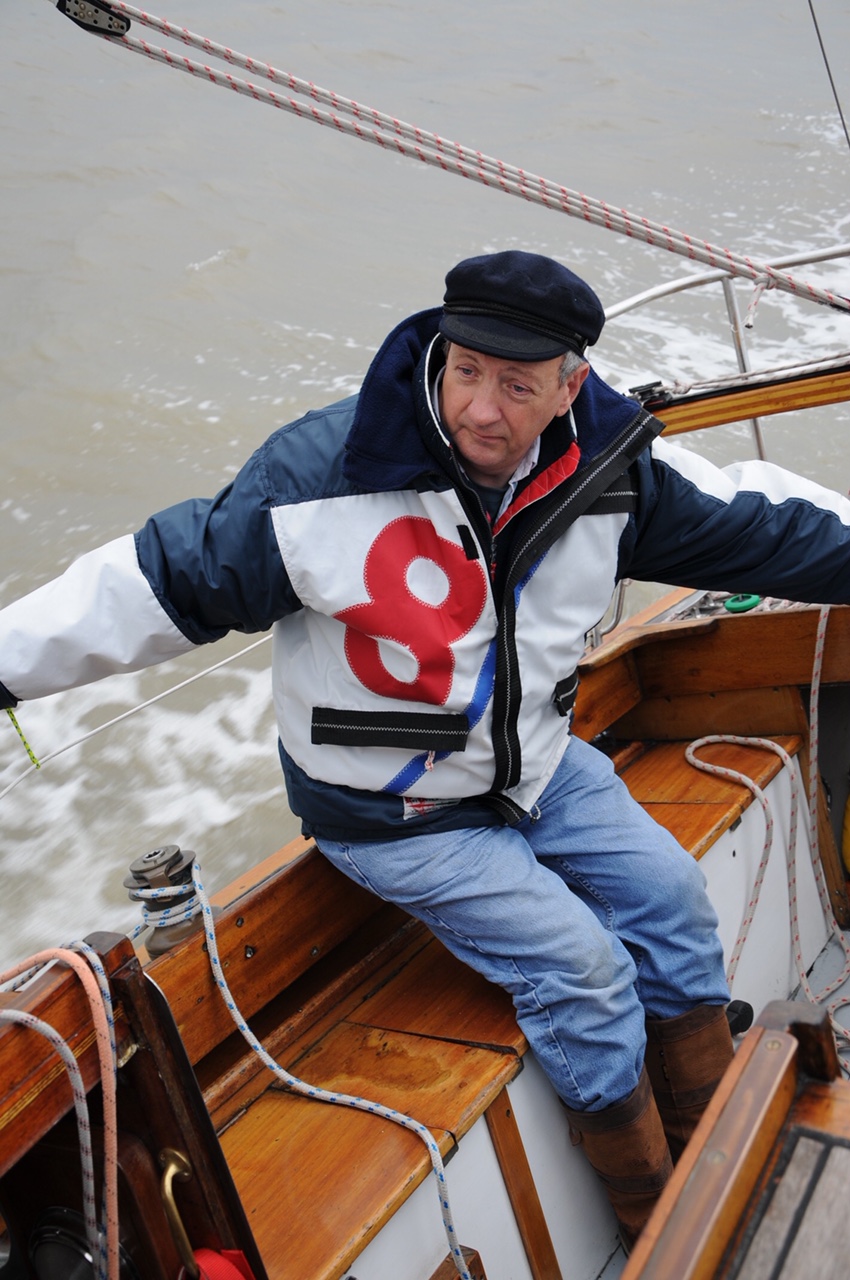 John started sailing in muddy Essex creeks at an early age and progressed into off-shore racing by sailing on a succession of racing dinghies and local cruisers, eventually taking part in many international offshore events throughout the UK, Europe, and USA.

A member of The Royal Ocean Racing Club, he got thru’ the Fastnet ’79 having turned a 40ft yacht upside down in the middle of the Irish Sea. John has sailed on large Sail Training Association vessels literally ‘showing the ropes’ to many underprivileged, and first-time sailors gaining a lot of satisfaction from watching rookie land-lubbers become competent seamen or women, taking many life-changing lessons ashore with them after only a few days at sea.   Just like his passion for rugby, John reckons sailing is all about teamwork, leadership, and getting stuck in. “A boat doesn’t care who you are, or where you come from” he often says.

John has his own yacht, which is in the middle of a long-term rebuild, and is a firm believer in the saying that ‘an old wooden boat represents a hole in the water into which you throw money’. 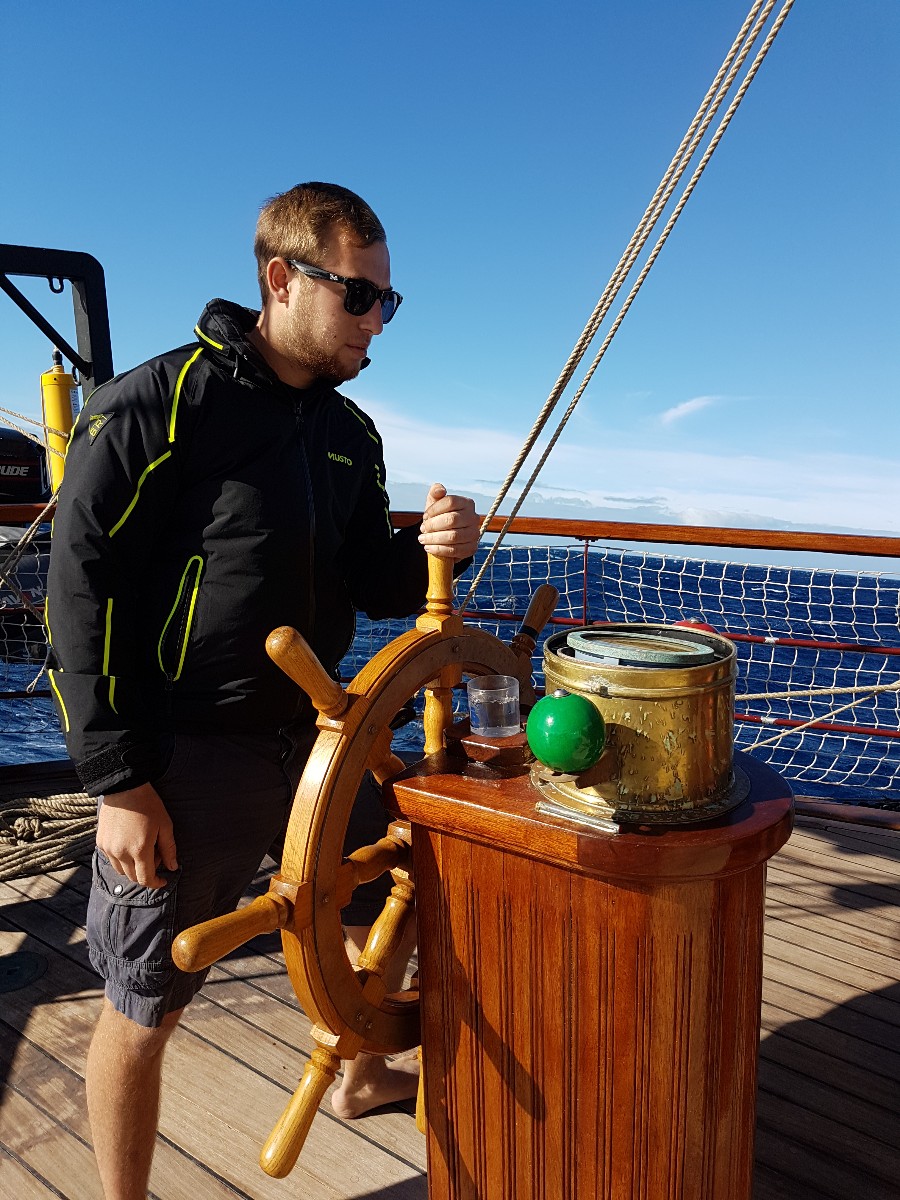 Qualified Skipper Charlie Besant who works for Associated British Ports has joined the Council of Management. Charlie started his involvement within sail training onboard Excelsior at the age of 15. Following this, he worked on different training vessels and traditional craft gaining qualifications and working his way up the ranks to the position of Skipper.

He is now working for Associated British Ports on commercial workboats. Charlie still has a strong interest in youth development and traditional sailing craft and knows personally that the link between the two can be life-changing.

We are still working with Lowestoft and Suffolk agencies making plans for 2021 and Excelsior’s 100th birthday and have formed a steering group with Lowestoft Town Council, the Royal Norfolk & Suffolk Yacht Club, Associated British Ports, and East Suffolk Council. As mentioned in our previous newsletter, HRH The Princess Royal has agreed to be our Centenary Patron.

To improve the opportunities to find out more about our ship online we have started an Explore Excelsior section on our website, featuring videos, 360-degree photos, and more. We will be adding more to this over the coming weeks.  National Historic Ships are seeking applications for a ‘virtual flagship’ and we have applied. (www.nationalhistoricships.org.uk ).

Our Tom Crisp Scholarship Scheme is currently on hold but will return as soon as we are fully operational.

Skipper Nick Dwyer participated in a live Facebook broadcast with the local shanty group The Rogue Shanty Buoys – you can source this chat on Excelsior’s Facebook page.

The coronavirus lockdown is no obstacle to one of our most determined volunteers. A few months ago we were contacted by the daughter of the late Derek Taylor. Derek used to work for the Trust and played a significant part in the restoration of the ship. In his spare time, he began a project to build a scale model of Excelsior. Great progress was made on the hull and the main spars but unfortunately, the model was never completed.

We were able to put Derek’s daughter in touch with Leon Reed, one of our skilled volunteers and Excelsior Honorary Smacksman who agreed to take on the completion of the model for the Trust. The enforced lockdown has provided the perfect opportunity for Leon to begin progressing the completion of the model at home starting with the various items on deck, companionways, hatches, winches, etc. It’s slow painstaking work but then we do have time at the moment! 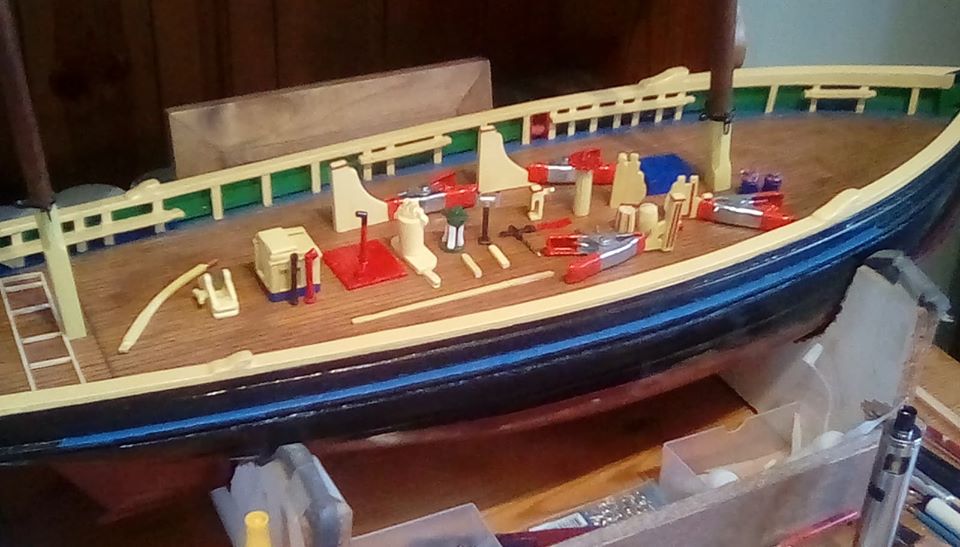 Find out more about The Excelsior Trust, one of our Shipshape Network East Projects here