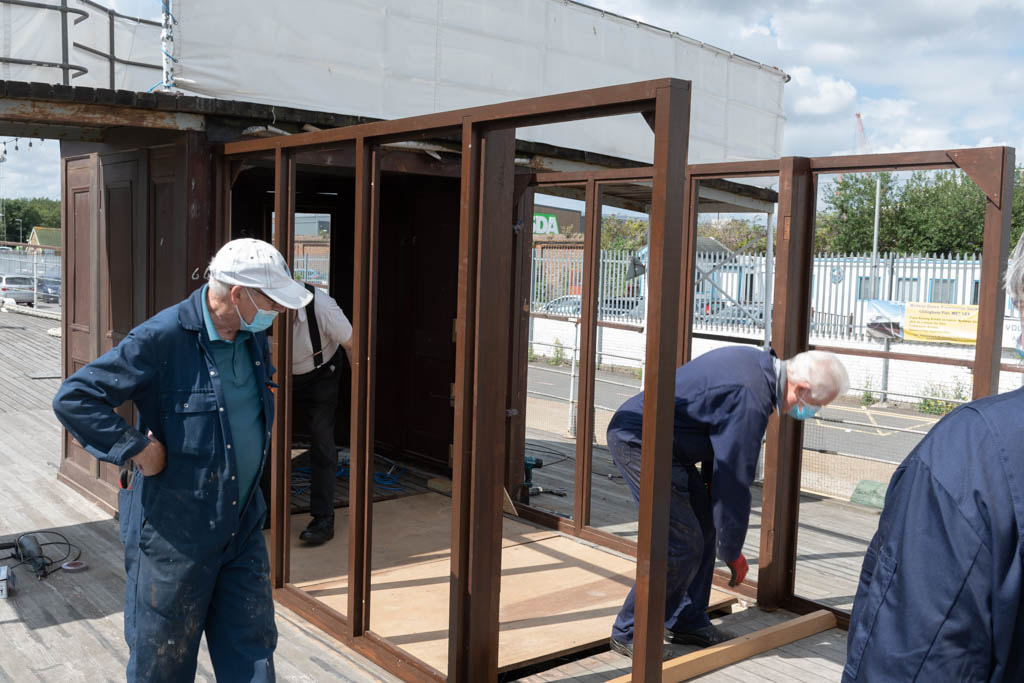 Ron's hard work pays off:-
Ron Vant, Engineer and self-taught Carpenter, has been working since November last year to build the new forward deck house.  Ron has made his own drawings and sorted out the cheapest way to buy materials for the project.  By buying rough-sawn bulk timber he has reduced the material cost by about 60%.  From the rough timber he has cut and planed the wood in an economical way to build the deckhouse.  He has worked continuously for three days per week up to lockdown to produce it in such a way as to be easily assembled on the ship.  Throughout this process his extra pair of hands came from Jim Christie, who has been of great assistance, and was later joined by Bob Wilde. 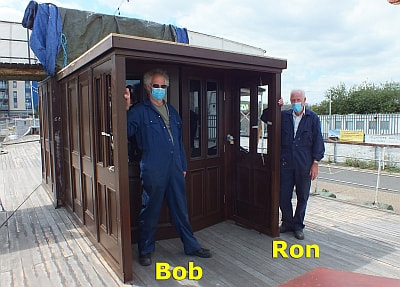 The temporary deckhouse was installed in 2014 as a short term solution to make the ship secure and watertight and it has served its purpose.  On Monday the 20th July 2020 all nine Volunteers who attended the ship set about removing the old deckhouse and fitting Ron's new one.  Whilst carrying out social distancing one team started on the removal while the others started to transport the new sections to the ship.  By our first break the old deckhouse had been completely removed.  After morning break we set about erecting the sections of the new one which all went together without a hitch.  All members of the team knitted together to get this completed on a very hot day.

By the end of the day the main structure was in place with roof on and deckhouse secure.  This was only made possible by having a very well made structure with the quick assembly in mind.  Well done Ron. The team, whilst working on a very hot day, showed the true spirit of the Medway Queen under Covid restrictions; they got the Job done.

On Wednesday, the 22nd July, the over flashings were fitted together with the roof completed ready for the coatings to be applied.  Internally the false floor was removed and handrails re-instated to the companionway and it is now available for normal use although there is still some minor work to be done.  The next phase is to refurbish the forward Captain’s cabin while the weather is still good followed by the whole structure being given its final coat of varnish.

Well done to Ron and the team for a great effort.

This news item taken from the Medway Queen Preservation Society website; find out more about them, one of our Shipshape Network South East Projects here.