The Scottish Maritime Museum has raised £39,835 for essential repairs to MV Kyles, the world’s oldest floating Clyde-built vessel, through a Crowdfunder campaign, more than double the original £15,000 target.

The Scottish Maritime Museum’s Keep the Kyles Afloat campaign was made possible by the #SupportOurMuseums initiative through which Crowdfunder UK and the Museums Association provide free a Crowdfunder platform to support museums as they face the huge challenges of the Coronavirus pandemic.

David Mann, Director of the Scottish Maritime Museum, says: “We are blown away by the support for our campaign to get MV Kyles shipshape for its 150th anniversary in 2022.

“Thanks to everyone who has donated, and the help of the #supportourmuseums initiative which made the campaign possible, we can ensure that this historic vessel remains part of Scotland’s living maritime heritage for decades to come.

“We can make essential repairs, create new interpretation and now we can be even more ambitious, working on the engine so Kyles can sail under its own power for first time in over a decade.

“All going well, we even now hope to sail Kyles up the Firth of Clyde and into Glasgow for the UN’s Climate Change Conference in November.

“What a birthday gift for a rare survivor and a workhorse of a vessel which has had 24 different owners and been continually adapted, as a cargo coaster, fishing tender, sand dredger and even a sludge tanker before being retired to the Scottish Maritime Museum in 1984!

“Our heartfelt thanks go to everyone who donated.”

Just over halfway through the fundraising campaign, the Museum, which is based on Irvine Harbourside and in Dumbarton, received a £15,000 donation from Mr John Paul DeJoria of Texas.

Mr John Paul DeJoria, who is one of the signatories on Bill and Melinda Gates and Warren Buffet’s ‘Giving Pledge’ committing billionaires to give the majority of their wealth to philanthropy, is the owner (custodian) of Taymouth Castle in Kenmore, Perthshire. He read about the Keep the Kyles Afloat Crowdfunder campaign on the international Maritime Executive news website.

MV Kyles, which unusually retained the same name despite so many owners, was built by John Fullerton & Co. at Paisley in 1872 and served first as a tender for the Clyde fishing fleet, up until 1881.

The 122 tonne cargo coaster is a rare and nationally important survivor from the 19th century, a transformational period on the River Clyde when shipyards embraced the possibilities of steam power to become one of the most important shipbuilding centres in the world.

At 148 years, MV Kyles is older than the Falls of Clyde, tall ship Glenlee and the Sir Walter Scott.

MV Kyles was brought out of Irvine Estuary at the end of last year in advance of the repairs, which the Scottish Maritime Museum’s Scottish Boat Building School and Curatorial teams on Irvine Harbourside, hope to begin over coming months.

Funds raised will also allow the team to repaint Kyles inside and out, restore the cabins to how they would have looked whilst it was a working vessel and create exciting new interpretation.

Find out more about our other Shipshape Network Scotland Projects here. 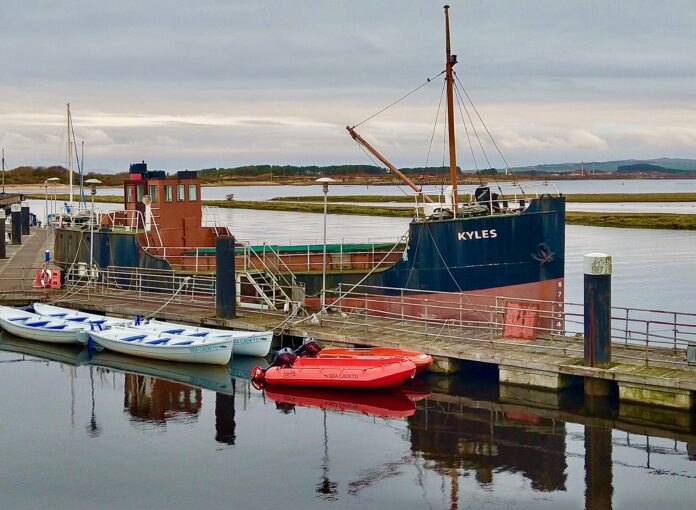