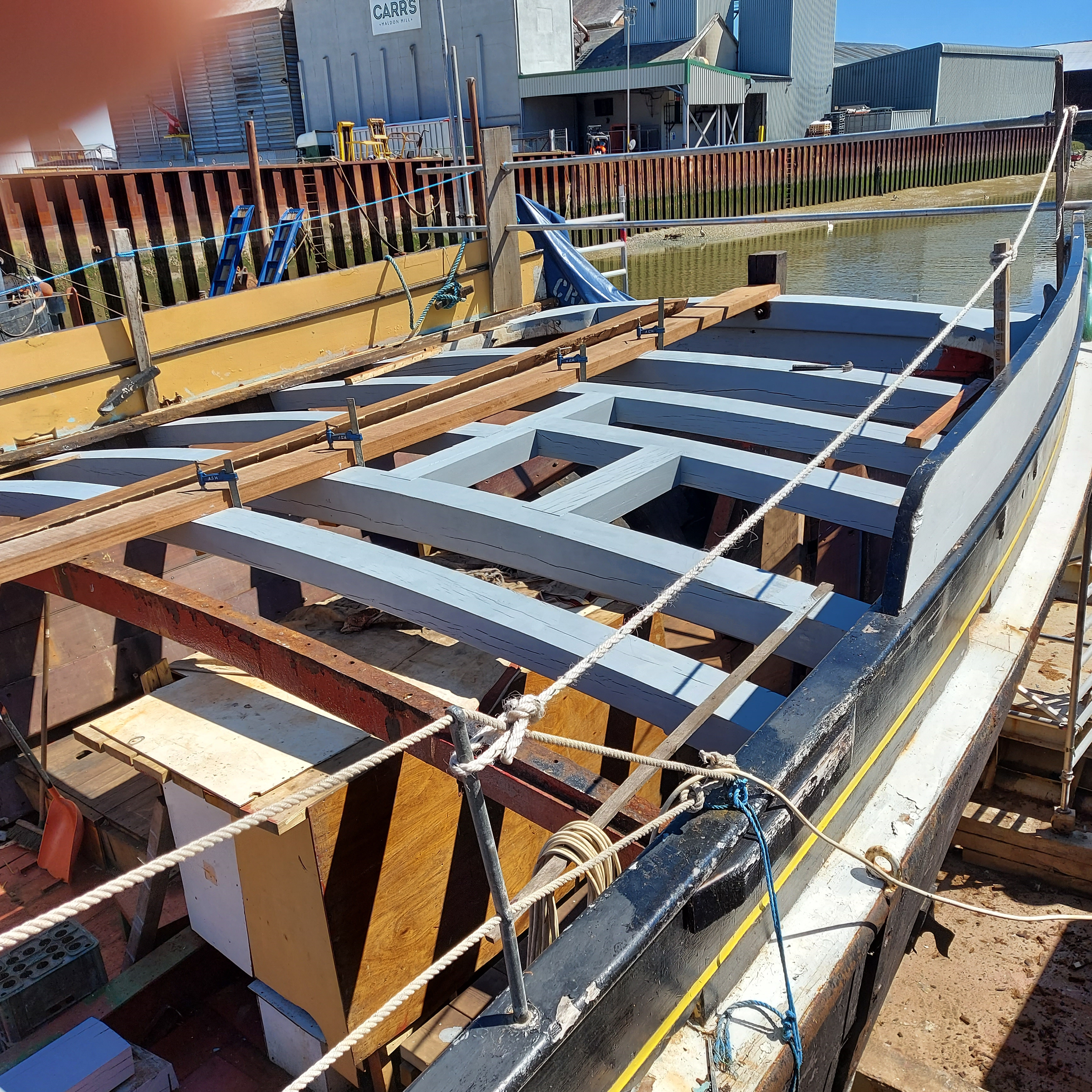 Following the Thames Sailing Barge Trust's last report, Pudge was all prepared and just waiting for the dry dock to become available.  As soon as she was inside and had settled down in position her bottom was cleaned.

Kevin Finch and his Team, which now includes a shipwright trainee, fixed steel cables, rigging screws and Acro props across the inside of Pudge and over to the side of the dry dock to ensure that she kept her shape when the deck planks and the structural wooden and steel beams were removed.  The rudder and the steering gear, both masts and the sprit were removed.  The wooden masts have been stored safely on the bottom of the dry dock, underneath the barge to keep them out of the sun.

The next stage was the removal of the cargo hatches.  Pudge does not have her original lift off hatch boards that she had in trade as they were removed when the hold was converted into accommodation and were replaced with a fixed boarded top.  As there was nothing traditional left worth saving it was all broken out and disposed of.  They have kept the fore hatch skylight which will be replaced after some repair work and both sliding entrance hatches.

The coamings, the name given to the sides of the cargo hatches, are normally made of one piece of good quality hardwood 5 inches thick.  This gives them the great strength needed to carry the weight of the inner edge of the side decks which are fastened to their undersides.  Removing them showed that there had been a number of repairs over the years whilst she was in trade.  The starboard side was actually made up of two separate thicknesses of timber.  Plus the whole of the hatch had been raised by adding pieces to the top in order to increase the cargo space.  All this had allowed it to bow along its length, sinking down in the middle and taking the deck with it.  This was the major cause of all the deck leaks we experienced.  We do know that Pudge had two collisions during her trading days which led to some major repairs, but we have no record of the actual work carried out.

After both the main and the fore hatch coamings had been removed, all the deck planking was carefully stripped out.  They have retained the engine room hatch which was in good condition and also the entrance to the skipper’s cabin which has always acted as a skylight and held the compass binnacle.  That is at present is being restored by one of our volunteers and will be re-fitted in due course.

This just left the 9 wooden beams and the 5 steel beams left in position.  Each of the wooden beams was taken out and replaced with one of the new ones that had already been fashioned (see previous report).  They have been positioned and fixed to a specific height to give the correct contour and camber to the deck.

We had previously examined the 5 steel beams in situ and although they knew that some repair work would be needed, we thought that would be the way to go.  However, when the deck had been removed and we were able to have a much closer inspection, they discovered that they were in a worse condition than we thought.  On investigation they found it was going to be much cheaper and also better long term to have new ones fabricated.  So patterns were made and a price agreed and we are now awaiting completion and delivery.

They knew that the saddle chock, the low rail which goes across the stern above the transom, had quite a lot of rot in it.  They were concerned that the rot would have travelled down into the transom itself.  However, when the shipwrights removed it they found that the rot had stayed within the transom and the transom and the corner knees were still in good condition.  All that was needed was the replacement of a small wooden pad behind the rudder centre gudgeon iron.

Whist all the stripping out was going on quite a lot of small metal items were removed which were part of the main structure and therefore the volunteers had not been able to remove them previously.  These include the batten hooks which are fitted all round the main and fore hatches and hold the hatch cloth, battens and wedges in position. There are over 50 of these altogether.  Also removed were the 4 large brackets which are used to locate and support the hatch boards and the two snatches (fairleads) from the transom.  All these need to be chipped and cleaned back to bare metal, de-rusted and repainted.  Due to the virus we are still unable to bring the volunteer group into work yet, but several of them have volunteered to work on items at home.

The oak breast hook that sits behind the stem under the deck was found to have rot in it, so a new one has been made and is ready to fit.  At the time of writing the shipwrights are completing the making and fixing all the other and various knees that help support the beams and keep the corners in position.

Find out more about the Thames Sailing Barge Trust, one of our Shipshape Network East Projects here.