Over the last few months, work on Pudge has continued at Fullbridge and it is hoped that in the next month or so, the first phase of the conservation work will have been completed.

At the end of the last update back in December the Kevin Finch, their shipwright and his team had shaped up the two main hold hatch coamings.
Soon after, the main hold head ledges were made, followed by the fore hold coamings, and head ledges. The corners between the coamings and the head ledges are jointed together by half dovetail joints, such that the ends of the head ledges clamp down on the ends of the coamings. This together with the through bolts, holds them down to the deck and beams below, to make a stiff box around the hold. The coamings and head ledges have also had their Batten hooks put in place.

Pudge had a makeshift tie beam of steel half way along the hold  to support the fore and aft hatch support beams when the Trust purchased her. At this point the deck carlings on either side are of larger section than the others. It is possible that originally it may have been a continuous wood beam right across, as some other barges. After discussion with Kevin Finch our shipwright, we have decided to fit an oak beam/head ledge between the main coamings to tie them together. This beam will be supported down to the keelson with a steel stanchion, as before.  This job will be done after the coamings have been completely fixed down.

The saddle chock has been fashioned to fit the deck, and the rails,  and a trial fitting has been completed. We have decided to reinstate 2 hawse pipes through the saddle chock, as originally fitted. Holes have been cut ready for these. Also, we have asked Kevin to carve in her PLA no. on the starboard side of the saddle chock.

Whilst waiting for new bolts and other sundries, Kevin decided to start removing the ceiling, so it can be replaced. It had degenerated into a mixture of odd short planks, and there is rot from rainwater leaks in various places.

The majority of the floors below were found to be in reasonable condition, except for the first three aft of the raised fo’c’sle ceiling. The first of these was rotten in the centre, which had been below the old saloon stove’s chimney. The second was rotten between the keelson and port chine keelson.. The third had a sheared diagonal split right through on the same side. It was decided that we would replace all three with new oak floors. To remove them the keelson had to be cut just aft of the three floors, and removed along with its fixing bolts. The fo’c’sle ceiling had to be dismantled to facilitate this, as well as two short lengths of the lining. Three new floors have now been fitted, and the keelson welded and bolted back in place.

When there was a few dry days Kevin and the boys fitted the new stem and stem band back in place, together with a new knee abaft the stem, bracing it to the deck and beams below. Two new knees to brace the bitts have been partially fashioned, and trial fitted in position.  The final shaping will be done when the windlass is being refitted.

Another job completed was re-hanging the rudder with a new slightly reduced diameter pivot pin, as the old one was too tight.

The next job was to remove the old inwales. This has been done, and a few frame heads on the starboard side that had split or were soft have had new wood grafted on. New planks have been cut and put aboard the barge. Now Kevin has started the tricky job of fitting the new inwales.

There are many other small jobs being done in parallel. One that has been started is making new pads to bed down the mooring bollards. These will be needed soon as we are hoping Pudge will leave the dry dock in March.

Full details and pictures of the work completed to date can be found on the Trust’s Pudge Project website www.thepudgeproject.com

Find out more about our Shipshape Network East Projects here. 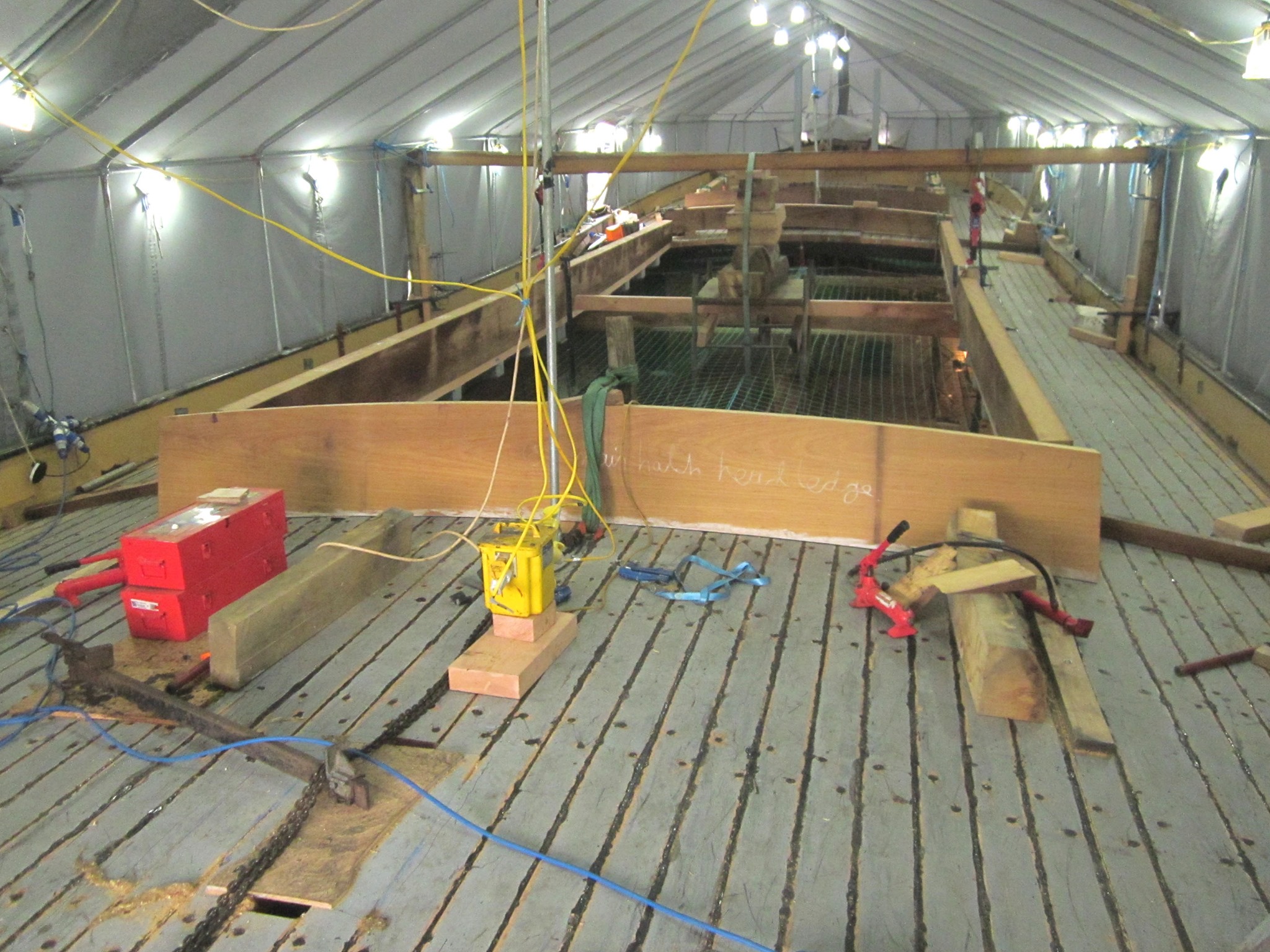