The Thames Sailing Barge Trust's Pudge Project is in full swing and they wanted to share this autumn update with you:

The steel beams that we awaited have now arrived. These beams go right across the barge at deck level to support the forward and after ends of both hatches known as headledges.  However, this gave the shipwrights the opportunity to work on another necessary job at the bow.

For some time we had been concerned that some cracks in the timber of the stem had been getting wider and had already purchased a piece of timber to fashion a new stem.  To remove the old stem it is necessary to first remove the stemband.  This is a steel bar around 4” wide and 1” thick which is fastened right up the front of the wooden stem.  At its top end it has a forged eye to which the forestay is attached and bolt holes spaced along its length for fitting it to the stem.  The shipwrights have now fashioned and fitted the new stem and are waiting for the blacksmith to complete fashioning a new stemband which will be changed slightly in design in order to give the new stem a longer life.

The new beams duly arrived and as Kevin Finch had made patterns of all the bolthole positions in the old beams he was able to transfer them directly to the new beams using a magnetic base drill.  This speeded up the process and they were soon being craned on board into position and bolted in place.

The shipwrights were then able to start work on the deck planking, beginning with the mast deck.  All the deck planks had been previously cut to length with caulking grooves running down the side.  Thicker and stronger timber is used under the mast, which also sits on top of a 9” square wooden beam with a steel pole going down to the keelson.  This ensures that the deck can take the extreme load and pressure exerted by the mast, especially when sailing in heavy weather conditions.  As each area of decking is completed all the caulking seams are covered with tape to keep out any dirt, shavings etc. and they are given a coat of primer.

In the latter weeks of September the weather began to change. Fortunately Pudge already has a purpose built cover which was immediately brought to Fullbridge Quay by a few of our volunteers and under the guidance of the Trust’s ‘tent erector in chief’ the shipwrights soon had it in position and bowsed down firmly.  This enabled work to continue on the deck at a pace and in the dry.

The next area to be tackled was the foredeck, but before that could be started the windlass bitts, which had already been prepared in the yard, had to be put in place.  The bitts are the large timber posts on each side of the anchor windlass which hold all the operating parts in position.  Normally only the upper, above decks section of these timber posts are seen, however for maximum strength they go through the deck and right down to the bottom of the barge.  Directly in front of them is the last of the five new steel beams which have been fitted.   We call this the thrust beam because it helps take the thrust of the massive force that the anchor can place on the windlass at times.  Once the bitts were completed it was time for the majority of the foredeck to be laid from the stem back to the forward headledge of the forehatch.

The shipwrights followed on by completing the afterdeck in the same manner from the transom up to the after headledge of the mainhatch. 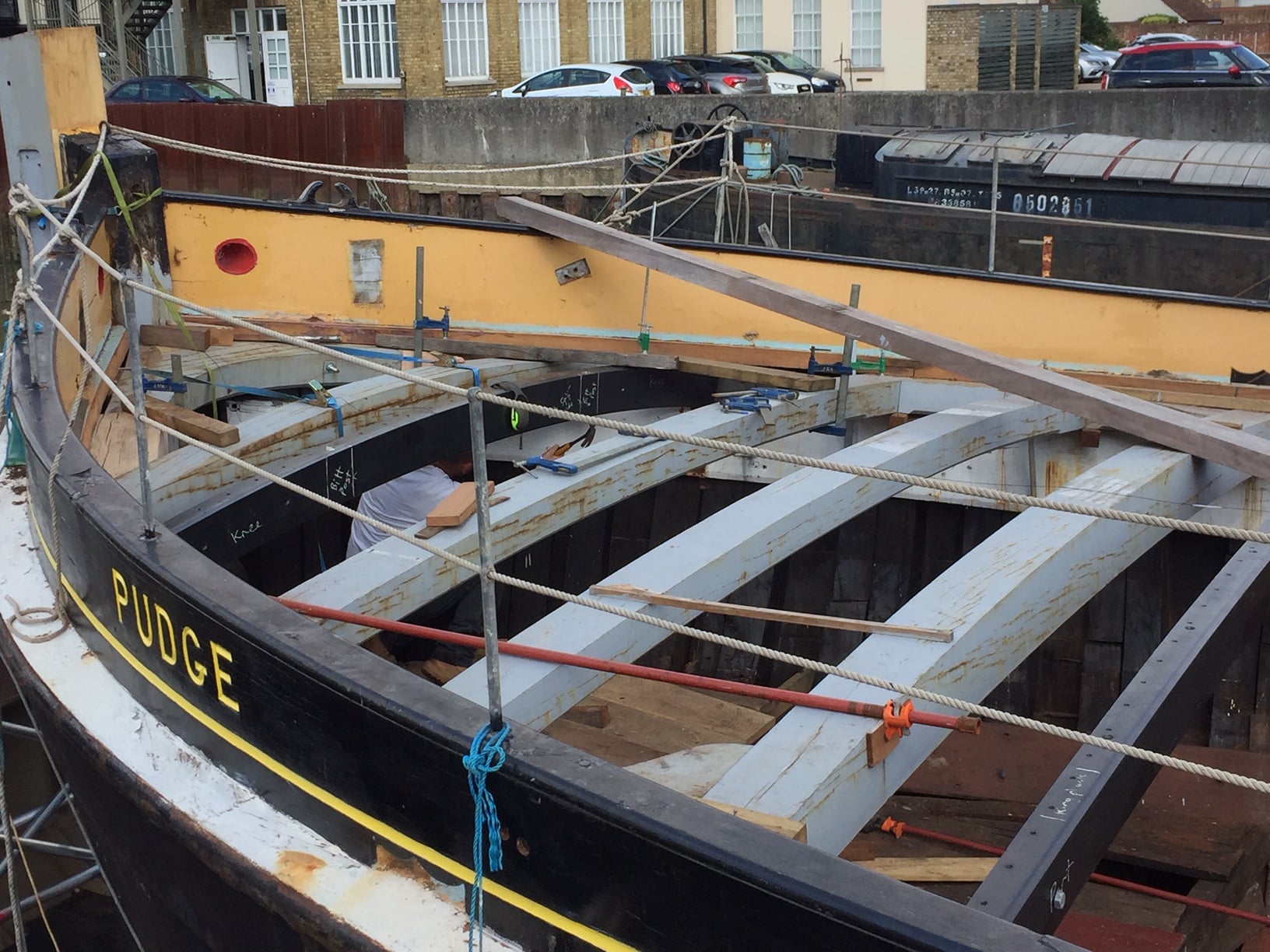 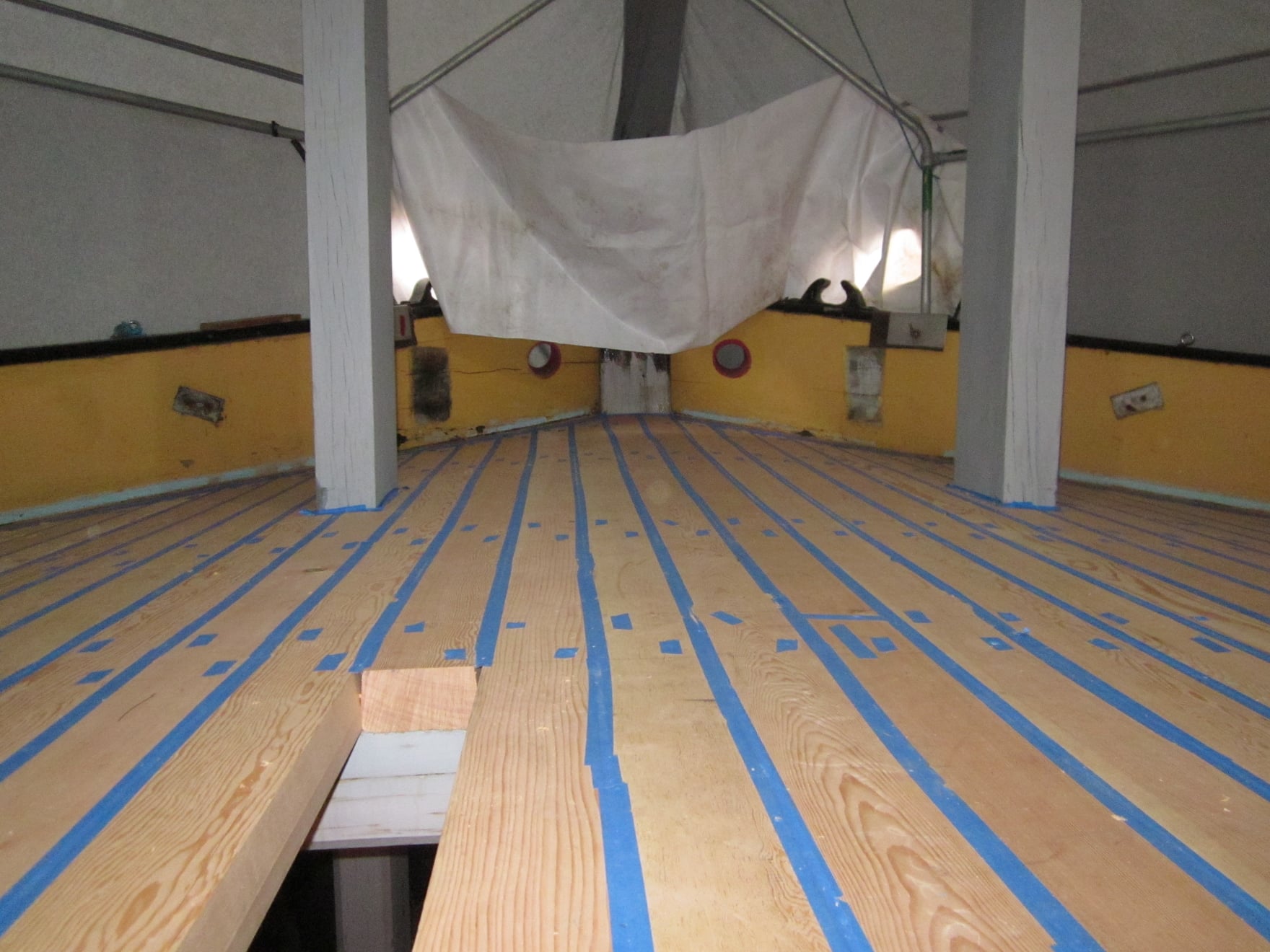 Find out more about the Thames Sailing Barge Trust together with our other Shipshape Network East Projects here.