It was the evening of December 3, 1920, in Fishguard. John Howells, Coxswain of the lifeboat, looked out into the bay with increasing concern.

The Dutch Motor Schooner Hermina had sailed from the Mersey bound for Rotterdam. They encountered severe gales and had prudently run back to shelter outside the harbour.

Now the wind had backed to the North West and increased to storm force. Exposed to the full force of the wind and massive storm waves, she started to drag her anchors towards the rocks and cliffs behind her.

When Hermina put up distress signals the lifeboat launched and, manned by John Howells and a hand picked crew they set out from the sheltered harbour to the horrific seas outside.

Named Charterhouse, the lifeboat had been funded by then past and present students and staff at the prestigious Charterhouse school. Very solidly built, she had bow and stern sealed buoyancy tanks, a petrol engine and tubes built into the hull to drain away seawater.

Arriving at the ship they set a kedge anchor and payed out enough rope to lie alongside the Hermina.

After an hour of intense effort during which she was often flung up into the ship’s rigging, they managed to take off seven of the ship’s crew.

Captain Vooitgedacht stayed with his ship, accompanied by the Mate and Second Mate who hoped to still save their vessel if the wind changed.

Now Coxswain Howells had to get Charterhouse off a lee shore; where the wind and waves were pushing them towards Needle Rock; and back to the safety of the harbour.

When the anchor was retrieved the engine was put out of action by the water which was washing right over her. Making things even worse, the mizzen sail was torn away by the now hurricane force wind.

The only way to save her was to rig another sail. Tom Holmes and Tom Davies climbed up onto the exposed foredeck and, braving the waves washing right over them, managed to make fast a jib sail.

This allowed the boat to slowly claw itself away from the nightmare of rocks and cliffs.

Finally with the aid of their oars they were able to come about and limp into the safety of Fishguard harbour.

Arriving at about midnight, they had been out for 5 hours.

Soon afterwards the Hermina began to break up on the Needle Rock.

The Second Mate was swept away, but miraculously the Captain and Mate were able to scramble above the worst of the waves and cling on to the rocks until daybreak.

They were rescued by William Morgan - lowered down on a rope by the Fishguard cliff rescue team.

This was no ordinary lifeboat rescue! As an incredible feat of seamanship it was recognised widely.

Both crew and lifeboat were taken by train to London in April 1921 for presentation of the medals and the boat was exhibited outside the Houses Of Parliament.

On December 3, 1921 the crew were presented with Gold and Silver watches from the Queen and Government of the Netherlands as - “A token of high appreciation of the rescue.”

In his presentation speech Captain K.F. Sluys said: “Several of the members of this crew, and also Mr. Morgan, are husbands of wives, fathers of children, supporters of families.

“What are the motives of these men in the performance of their acts of heroism? Certainly not the craving for material profit…it is the call of humanity, and more especially that mysterious call of the brotherhood of the sea, to which these men respond when they go out to risk their lives for the sake of their fellow men at sea who are in peril, regardless of their nationality, race or colour.

“It is the call which strongly appeals to sailors all over the World, but especially to British sailors, so strong that during the war they even saved the lives of enemies whenever it could be done without prejudice to the military situation, and sometimes regardless even of that.

“Coxswain and members of the Fishguard Life-Boat crew and Mr. Morgan, the Queen of the Netherlands has sent you watches.

“Please don’t consider these watches as rewards for your heroism.

“Such heroism as has been displayed by you cannot be rewarded with a material gift, as there is no equivalent in money or any material profit for the lives of the men you rescued…please accept these as mere humble tokens of the deep gratitude, as emblems of profound admiration of the whole Dutch nation for your skill and seamanship, your gallantry and heroism.”

Charterhouse continued her service in Fishguard until 1930 - having saved 47 lives.

She was then sold and fitted out as a motor yacht named Marian and owned by the Lomas family for several years.

The family gave the boat to the specially formed Charterhouse Returns Trust at Fishguard in 2009 - 100 years after her first arrival there!

So far this has been a stirring story of generosity, courage and skill. The men involved have all passed away but are remembered by their proud descendants.

However, Charterhouse is still with us.

The Charterhouse Returns Trust have found a place for her at Pembroke Dock, in the West Wales Maritime Heritage Society yard at Front Street.

She is cocooned in a protective tarpaulin, and waiting to be faithfully restored to her condition as a serving lifeboat.

Both the CRT and WWMHS are run by unpaid volunteers.

To progress the rconservation they need to raise funds for a purpose built shelter which will allow her to be both worked on, and viewed by the public as a permanent memorial to those brave men and their incredible story.

CRT have set up a ‘Just giving’ site where contributions can be made online.

There are links to it on both the CRT and WWMHS websites and Facebook pages.

Also WWMHS need to establish a team of volunteers to work on the restoration of Charterhouse when the Shelter is built.

As well as for practical work on the boat itself, they also need volunteers with the ability to Curate the museum display and to act as guides.

Find out more about our other Shipshape Network Wales Projects here. 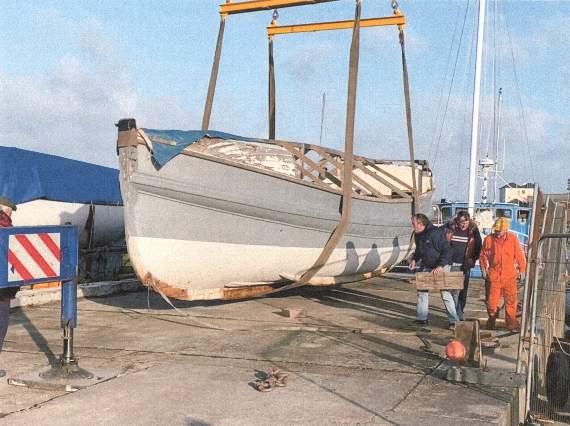