Update on the re-build of the Saxon ship in Woodbridge, Suffolk

Getting the ship started in 2019 has been a massive achievement, but the year ahead promises to be a very busy and exciting one as they lay the keel, welcome more volunteers and start identifying the wood for the hull.

By 7th December 2019 approx. 350 rivets had been sponsored and they now have well over 1,000 fixings sponsored!  You can see sponsor names on their website here. 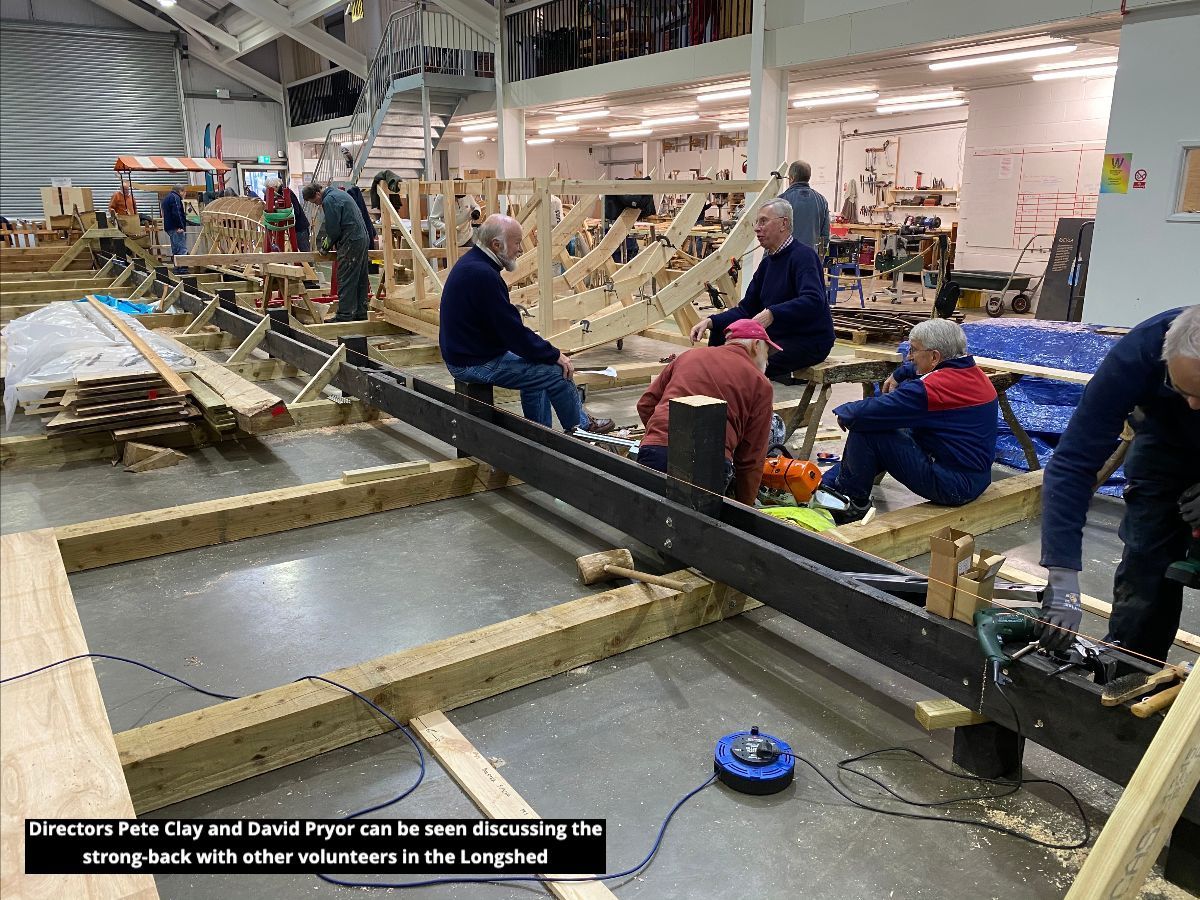 Preparing for the keel

The team are preparing the Longshed in Woodbridge ready to receive the wood for the keel, which they are hoping will be by the end of January 2020.

Wherever possible they are using Anglo-Saxon techniques but this is one area that they can't easily replicate.  The Anglo-Saxons would have built outside and driven the supporting structure into the ground whereas they are building in a massive shed with a concrete floor so that they can work all year round.  To compromise they are having to build a 'strong-back' which is a wooden structure shaped to hold the keel and designed to take the weight of the ship once it is complete.

You can see the structure in the photograph below (painted black) which now stretches from one end of the Longshed to the other. Further work is needed to add a working height bench all the way along the floor supports so that once the log is in place it won't need to be moved too much.   They will also be adding small oak pads to each of the uprights to cradle the keel and give an accurate height to each post so that the weight is properly supported.

Working inside will present other issues such as the green oak drying out too quickly so they will be experimenting with ways of keeping the oak damp, more to follow on this in later issues... 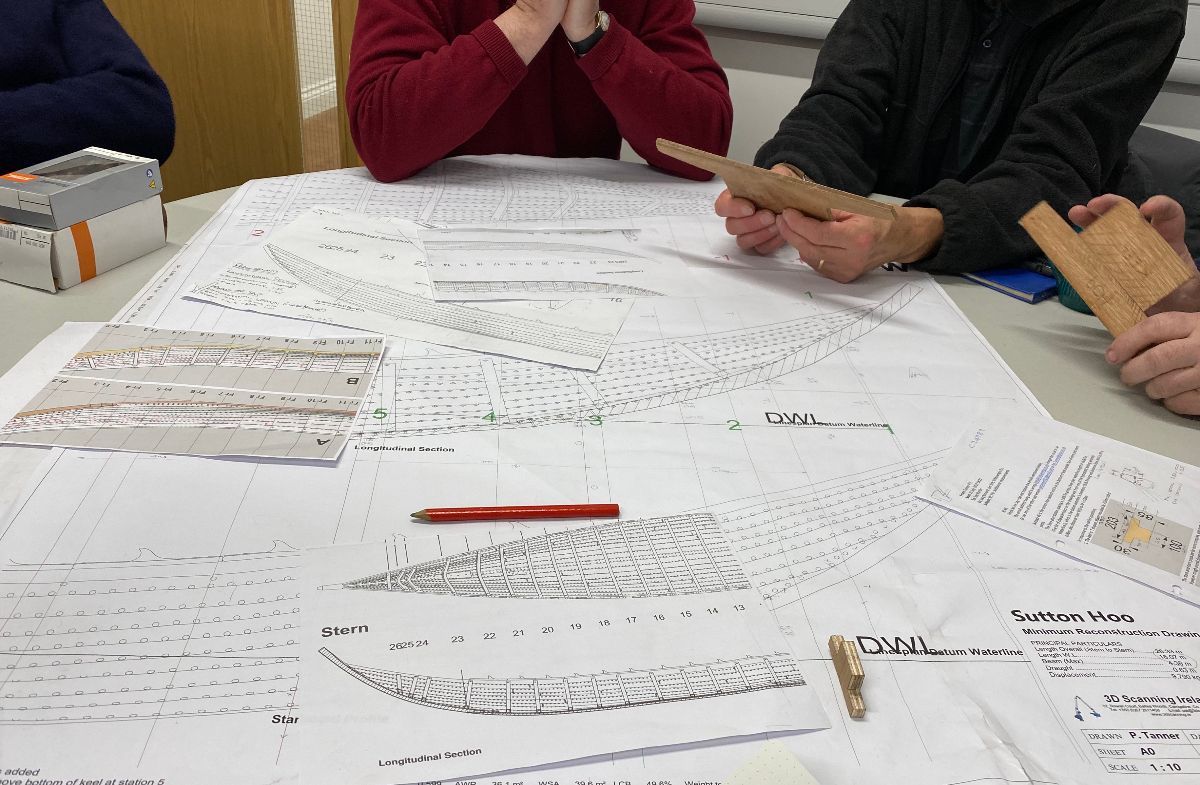 The data in the 2018 ‘Minimum Construction Plan’ gives us what they believe is the most accurate interpretation of the ship which was lowered into the ground over 1400 years ago. However, the Anglo-Saxons did not have computer developed drawings and all the plans would have been in the Shipwright's head, based on decades of handed down experience.

Historians tell us that Saxon boat builders used measuring sticks, bevel boards and various 'rules of thumb' to build their boats and ships so at The Ship’s Company they have to reverse-engineer this process and use our digital drawings to create a model that we can take these measurements from.  After much deliberation they decided to build a 1/5th scale model of the Minimum Construction Plan using modern materials and modern techniques.  This scale will be large enough and accurate enough to generate their measuring sticks and bevel-boards which they will use to build the ship itself.  The building of this smaller model is being overseen by John Cannon, an experienced model maker, and will be built to museum quality specification.  Progress with the fifth scale model is being captured by time-lapse photography which will made available, along with live streaming of all other projects, early in the New Year.

None of the internal layout of the ship was discernible from the excavations, either due to it having rotted away over the centuries or because it was removed prior to the building of the burial chamber.  To experiment with the internal layout, they are building a full-size model of the middle eight-metre section of the ship.  This will enable them to experiment with different heights of sole boards (floor) and thwarts (seats) and the distance between the rowing positions, although this is partly fixed by the layout of the tholes (oar pivots).  The midship sectional model is being built in two halves that we can bolt together when conducting experiments, this is entirely down to floor space which is becoming quite an issue now that we have laid the strongback ready to take the keel.  With this model they will be practicing the ancient woodworking skills necessary to finish off the planks and with different rivet materials to understand more about how the ship would and been fixed and possible caulked. 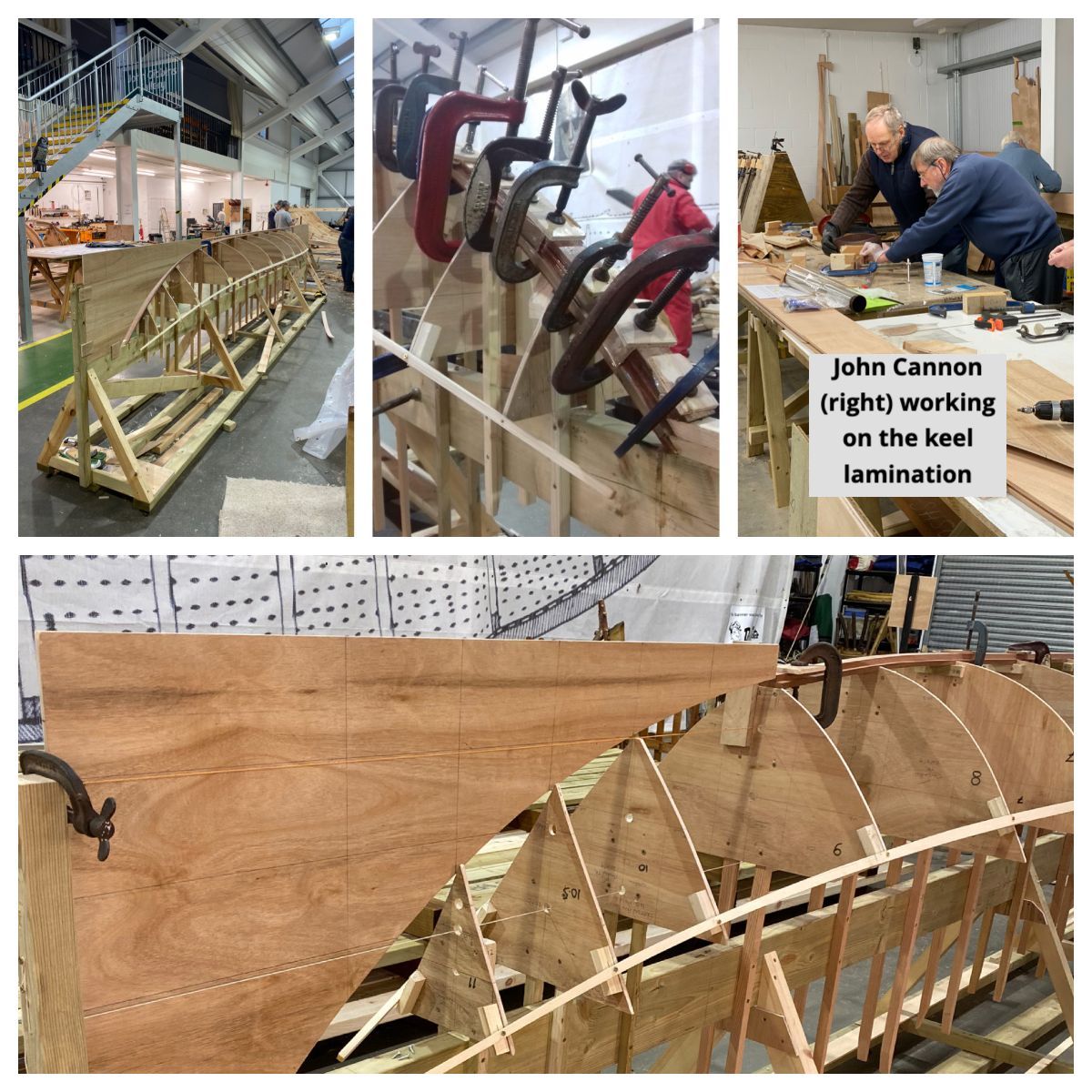 Volunteering for The Ship's Co.

The team welcome applications from volunteers wanting to help with the ship build but there are many other skills that we are short of including:

More information about volunteering can be found on the website - link 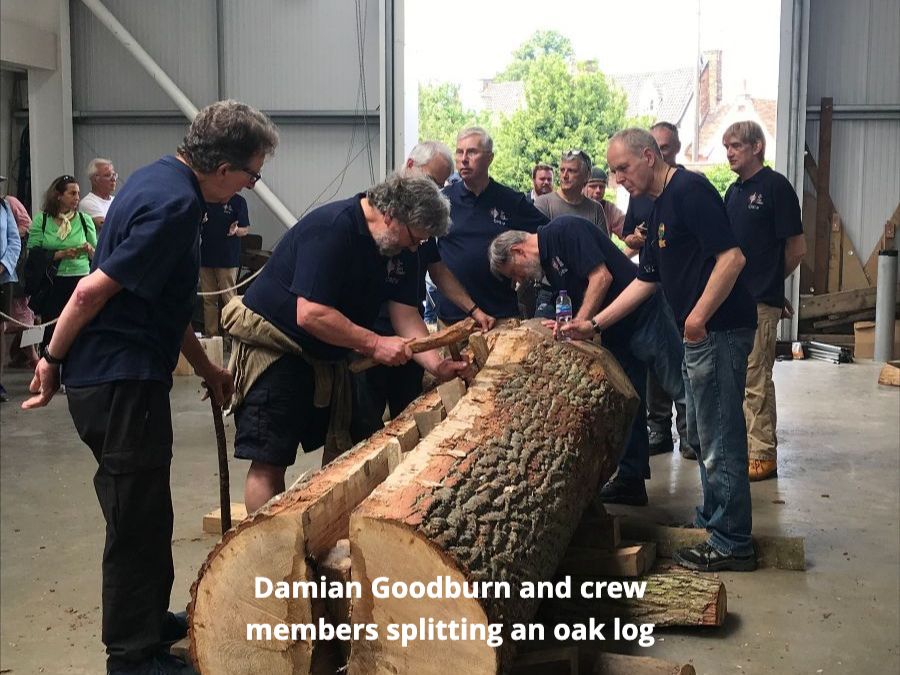 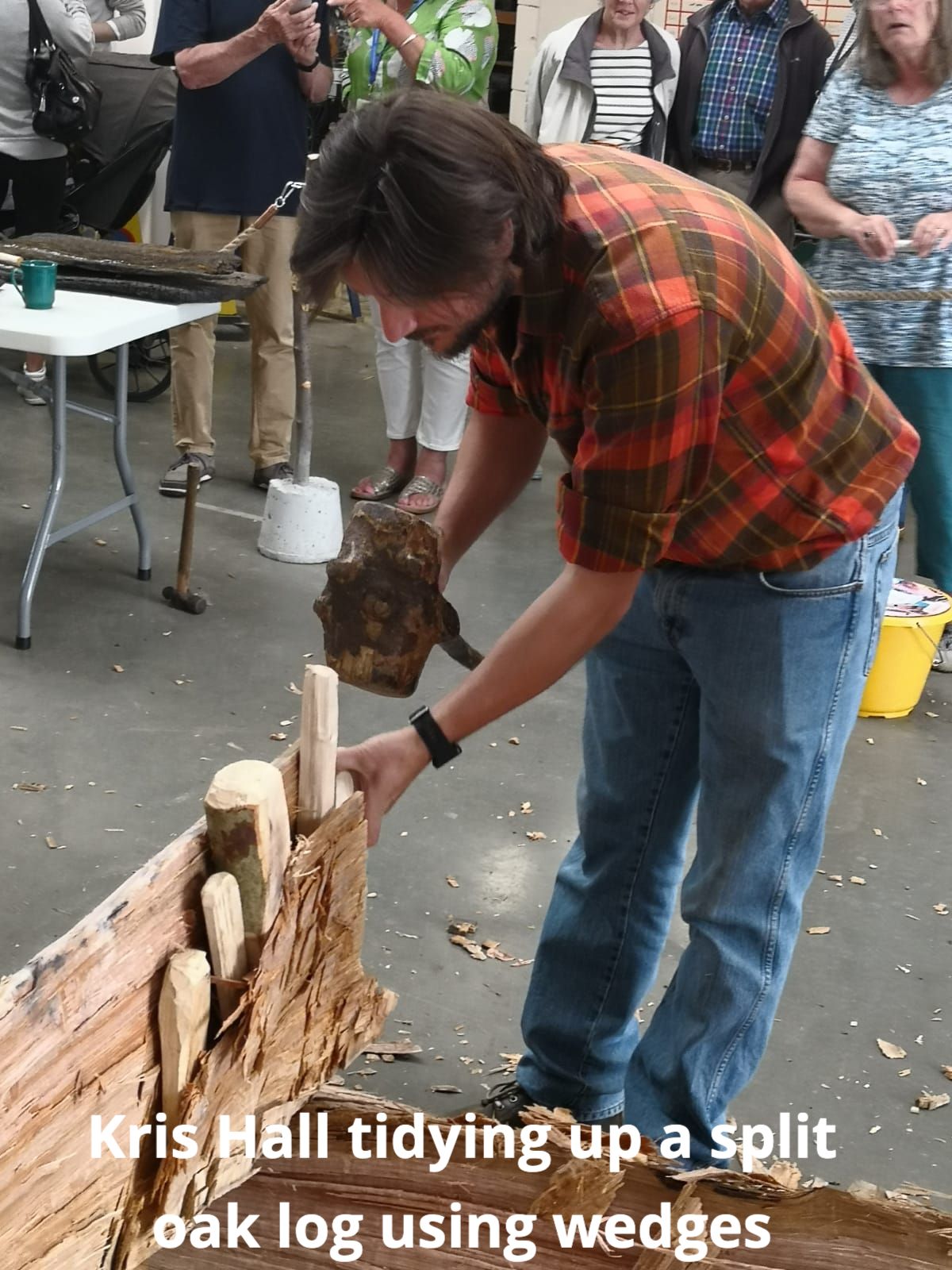 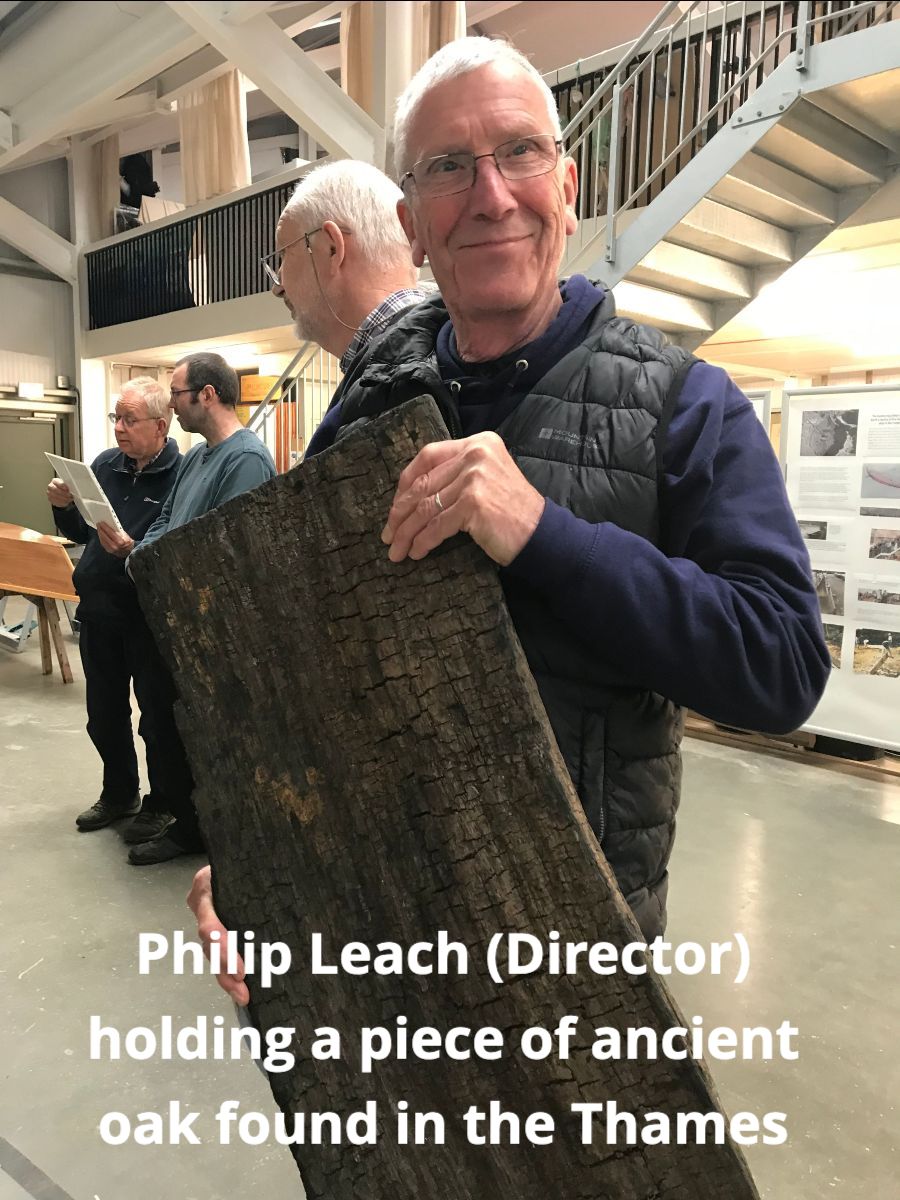 - Meet Philip Leech, Chair of the Directors
- Having our Axes and Adzes designed and crafted
- Experimenting with fixings and caulking
- Volunteering in the Longshed

To feedback about the Newsletter or request articles please email contact@saxonship.org - we will be pleased to hear from you!