The Dock Museum in Barrow in Furness is set into an original Victorian dry dock where the fascinating story of Barrow is told: thanks to iron ore and the Furness Railway, Barrow was a Victorian boom town and a twentieth century centre of innovation where the shipyard played an integral part in the town's development and within the overall context of Lancashire's history.

The Herbert Leigh was the longest serving lifeboat at the Barrow station from 1951 up to the time of her replacement in 1982.  The boat was donated to the RNLI by the Chairman of Leigh's Paints, Herbert Leigh, a Lancastrian who started a marine paint business after going on a round-the-world cruise in 1919 and seeing sailors mix their own paint (with varying degrees of success).  His ready-made marine paint was a huge commercial success.

The lifeboat was built at the East Cowes Yard of JS White & Co. Ltd, builders of lifeboats for many years, in 1951.  Originally she cost £25,955 to build, to a very high specification and her decks are mahogany (today's Tamar class lifeboats cost £2million to build).  Initially signalling was done by morse code but various technological advances were introduced, including radar.

In 30 years of service, Herbert Leigh, was launched 136 times and saved 71 lives.  Her first launch was within hours of arriving on station as the tanker Merrimac reported that there was a sick man onboard.

In 1982 she ended her service in Barrow and went into storage as a reserve lifeboat by the RNLI at the shipyard of R. McAllister & Son in Dumbarton.  She was formally handed over by the RNLI at a ceremony at the BNFL Terminal at Ramsden Dock on arrival from Dumbarton.

In 1990 she was moved to the Dock Museum, having been donated by Brian Leigh-Bramwell (Herbert Leigh's great 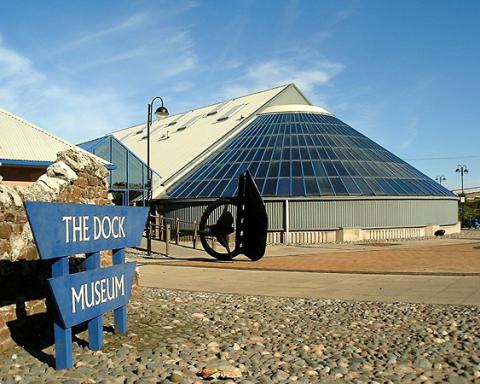 In 2005, funding was secured from the Furness Maritime Trust and from Barrow Borough Council in order to carry out essential conservation work. Patterson Boatworks restored this lifeboat and in 2006 Herbert Leigh’s restoration was completed and she was moved to the front of the museum site.

In 2019, the Dock Museum received funds from FCC Communities for conservation work - as the vessel's stored outside, the paint had weathered and there was a minor amount of rot in a few places in the decks.  The Museum aims to obtain funding for a structure to protect the boat in 2020.

February 2022 Museum will add photovoltaic panels to its roof as part of drive to be carbon neutral. Full story.

June 2020 The Dock Museum has secured a major National Lottery grant An exciting new heritage gallery, made possible by a National Lottery Heritage Fund grant of £816,700 will tell the story of shipbuilding in Barrow-in-Furness.  Shipyard Town focuses on the rich heritage of Barrow's main industry from the 1950s to the present day, as well as looking to the future.  Full story here 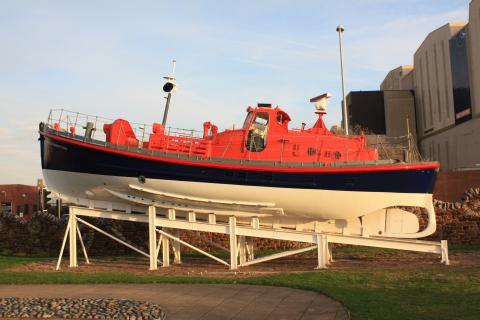