MAKING THE PAST THE PRESENT

The Donaghadee Heritage Preservation Company is a not-for-profit charitable company, formed by local volunteers in Northern Ireland, in 2015, that aims to advance and promote education, heritage and culture, primarily by the conservation, rehabilitation, maintenance and protection of the historic lifeboat Sir Samuel Kelly.

The lifeboat, which stands in the car park adjacent to the Copelands Marina in Donaghadee Co Down, has an iconic status locally because of its role in rescuing 33 survivors from the Princess Victoria disaster in January 1953. The lifeboat was stationed at Donaghadee from 1950 until 1976, after which it served in the reserve fleet in Ireland. At the end of its service life it featured in the headlines again seeing action during the ill fated Fastnet Yacht Race disaster in August 1979, whilst stationed at Courtmacsherry Co Cork. On retirement, the lifeboat was purchased by the Ulster Folk and Transport Museum and arrived back in Northern Ireland in 1980. Ownership of the boat transferred to local council run North Down Museum in late 2017.

During 2018, the Company signed a loan agreement for the Sir Samuel Kelly with Ards and North Down Borough Council in addition to a lease for the compound in which it is located.

The Company has identified three phases for the Sir Samuel Kelly Project: 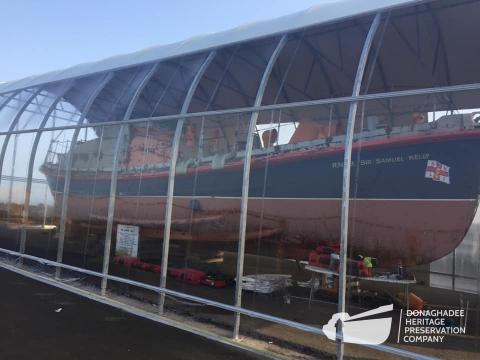 The new temporary shelter aims not only to reduce the destructive processes of the weathering that jeopardises the lifeboat's future and provide a base for the conservation work to take place, but has allowed the creation of a new public interpretation space for the town to raise the profile of the longer term project ie to exhibit the wider maritime heritage of Donaghadee.

The Sir Samuel Kelly location overlooks the North Channel the site of its many rescues, the new structure takes reference from the form and scale of traditional boat sheds, but allows the Sir Samuel Kelly to be displayed in a beacon-like structure through a delicate play of structure and translucent cladding.

This new space, which opened on 1 March 2019 with a visit by the Mayor, is highly visible from the town's Community Centre and linked to a popular walking route between the harbour and the Commons recreational area. This event marked the completion of Phase 1 of the project.

To restore the lifeboat to its 1953 state and bring it up to exhibition condition.

A recent specialist survey has highlighted the areas of the boat requiring attention and the Company will be concentrating on these activities in the near future. Considerable funding will also be necessary to complete the conservation and refurbishment work over the coming years.

To provide a permanent home for the refurbished Sir Samuel Kelly and other exhibits in a Heritage Center.

Since the formation of Donaghadee Heritage Preservation Company the Sir Samuel Kelly Project has enjoyed the support of the local community and Ards and North Down Borough Council. The Company, together with many local organisations have run fundraising events providing the where with all to erect the shelter. The local council has been very supportive in facilitating the loan agreement for the lifeboat and the lease for the site. In addition, the parties have signed a Memorandum of Understanding, to work together to achieve a satisfactory outcome to the project.

The success of the project will involve the continuing support of all involved.

Find out more about the Donaghadee Heritage Preservation Company here. 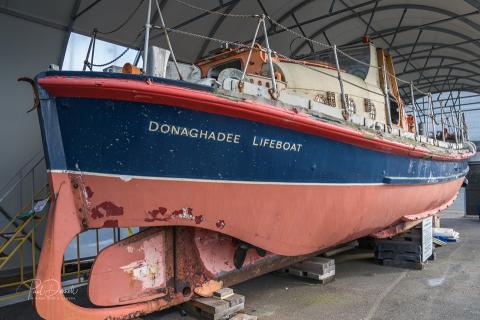