Chatham Dockyard covered 400 acres and for over 400 years supported the Royal Navy by building, repairing and maintaining its warships.  It was one of the Royal Navy's main facilities until it was closed in 1984.

One of Britain's most important Royal Dockyards, it was associated with many great historical figures of their time - great seamen like Sir Francis Drake and Lord Nelson, as well as literary legends such as Samuel Pepys and Charles Dickens.  The dockyard's role in supporting the fleet linked it to many of the most significant events in history - from the Spanish Armada to the Cold War; events that shaped the world we live in today.

After closure, the dockyard was divided into three sections: the easternmost basin was handed over to Medway Ports and is now a commercial port; another slice was converted into a mixed commercial, residential and leisure development; 80 acres, comprising the 18th century core of the site, was transferred to a charity called the Chatham Historic Dockyard Trust and is now open as a visitor attraction.

Delve in to 400 years of history at the most complete Dockyard of the age of sail in the world.  It’s a unique destination that celebrates Great Britain’s magnificent maritime past and unmatched contribution to the Royal Navy’s shipbuilding excellence that led to worldwide command of the oceans.

Explore 80 acres of adventure at The Historic Dockyard - discovering interactive exhibitions,10 museums/galleries – including three Historic Warships, a working Victorian Ropery and much more.

Don’t miss out on the award-winning gallery Command of the Oceans, telling the thrilling story of the dockyard of the age of sail with fascinating archaeology and long-hidden objects for the first time.  Command of the Oceans also is home to the gallery Hearts of Oak, where you follow a virtual 'John North' and his grandson on how ships are built, to discovering the timbers of the ‘ship beneath the floor’.

The Historic Dockyard as Visitor Attraction

- The Ropery: a Grade 1 listed building, Georgian and Victorian rope factory where rope has been made for almost 400 years.  Its rope, still made on the Ropewalk, has been used to rig the mightiest vessels ever to take to the sea.  Today, Chatham is the only one of the original four Royal Navy Ropeyards to remain in operation and together with its related buildings, forms the finest integrated group of 18th century manufacturing buildings in Britain.

In February 2022, the Dockyard opened their newly redeveloped Ropery Gallery, an atmospheric journey through the lives of Ropery workers, past and present. Immersive film, hands-on interactives, and displays, including a vast collection of ropemaking and rope related objects from the Museum of Knots & Sailor’s Ropework, tell the story of rope and its place in British history, with over 400 years rooted in Chatham.

- RNLI historic lifeboat collection: the UK's largest collection of historic lifeboats, which together have saved hundreds of lives off the coasts of the UK and RoI.  From an 1897 pulling and sailing lifeboat, to the familiar Arun class and Blue Peter inflatable inshore vessels, visitors explore how lifeboats have changed over the last century through interactive displays, archive film and audio clips.

- Steam, Steel and Submarines: the Dockyard story through the industrial revolution and two World Wars.  The 19th and 20th centuries represented times of great change at Chatham Dockyard, with this gallery exploring this defining period of power, strength and adaption to new technology.

- No.1 Smithery: a joint project between the Chatham Historic Dockyard Trust, Royal Museums Greenwich and Imperial War Museums that encourages visitors to unearth incredible stories through objects, paintings and play.  It's also home to National Museums: Collection & Research, a state-of-the-art, environmentally controlled storage space for over 3,000 models and artefacts.

- 3 Slip: The Big Space: built in 1838, No. 3 Covered Slip was, when built, the largest wide span timber structure in Europe.  Today, it's home to a vast array of epic objects and vehicles from both the Chatham Historic Dockyard Trust and Royal Engineers Museum, Library & Archive collections.  It stands at the cusp of technological change - its amazing cantilever roof was built to the design of shipwright Sir Robert Seppings.

- Command of the Oceans: award-winning galleries revealing the full dockyard story, thrilling archaeology and long-hidden objects for the time.  It tells powerful, compelling stories of innovation and craftmanship. 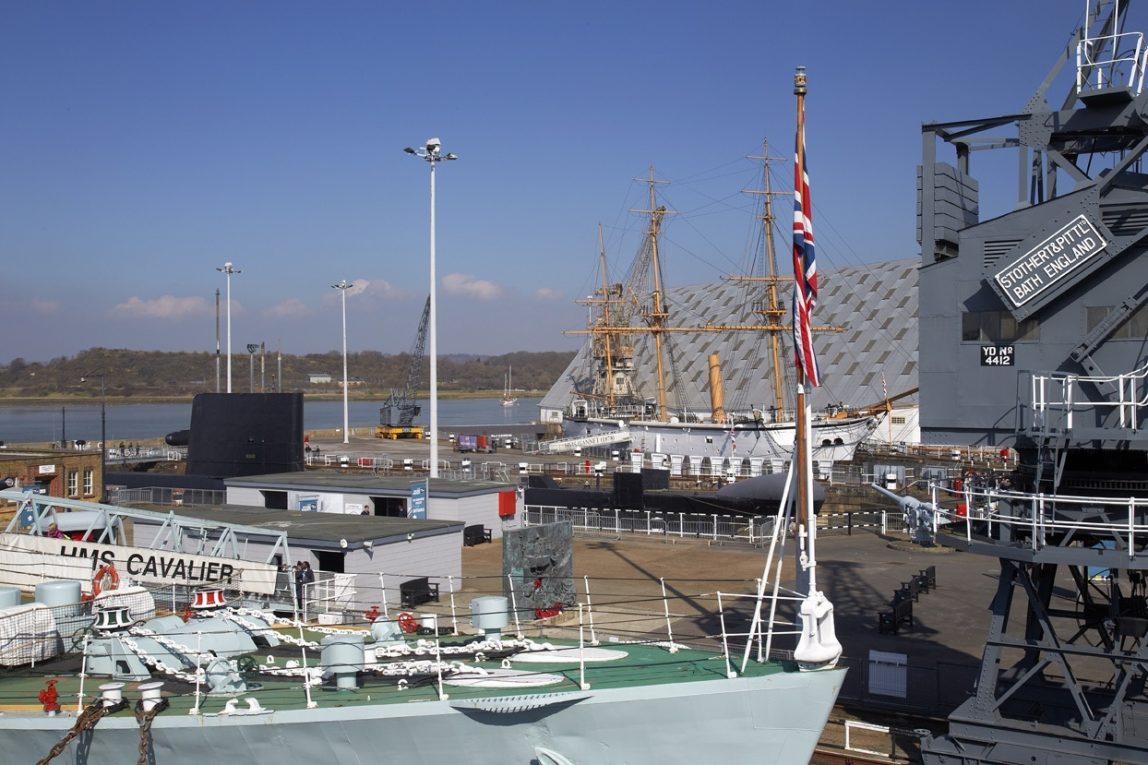 Vision: Historic Dockyard Chatham will be recognised as the world's most complete and best preserved dockyard of the age of sail.  Sustained by a mix of complementary uses, it will be a maritime heritage destination of choice, giving its visitors a unique understanding of warship design and construction and support of the Royal Navy during Britain's growth as a world power through to the closure of the dockyard in 1984.

- Preservation: to maintain excellence in the sympathetic preservation and use of The Historic Dockyard, its buildings, ships and collections
- Learning: to engage the most diverse audiences in learning about the significance and role of the former Royal Dockyard at Chatham and its people in supporting the Royal Navy from sail to steam and nuclear power over a 400 year period
- Experiences: to provide an unmatched, inspirational and enjoyable experience for all users of The Historic Dockyard - whether visitors, tenants, residents or students - that exceeds their expectations.

As a fully accredited Museum they collect, preserve, study and exhibit objects and materials connected with the history of:

The work of the Trust and all those that operate from its building contributes at least £16m to the local economy each year.

April 2021 Chatham Historic Dockyard Trust has been awarded £384,144 from the second round of the Government's Culture Recovery Fund.