About the Nancy Blackett Trust

The Nancy Blackett Trust was founded in 1997 with the aim of ensuring the preservation of Arthur Ransome’s yacht Nancy Blackett and using her to provide sailing opportunities for anyone interested, as well as encouraging an interest in sailing among young people in particular and promoting Arthur Ransome’s contribution to the heritage of the East Coast around the Orwell and Stour Rivers and the Walton Backwaters.

Arthur Ransome bought Nancy Blackett in 1935 when he and his Russian wife Evegnia moved to Suffolk from the Lake District in search of some sea-sailing. He named the boat, a Hillyard 7-tonner built in 1931, after the ‘Amazon Pirate’ heroine of his Swallows and Amazons books (she was previously Electron, and before that, Spindrift). He sailed her back to Pin Mill, and within a short time she had given him the inspiration for perhaps his best book, We Didn’t Mean to Go to Sea, in which she appears as the Goblin. So, in addition to a famous owner, she has literary significance.

By the 1980s, however, she had fallen on hard times; the most recent of five subsequent owners was unable to maintain her and she had become a near-derelict wreck in Scarborough Harbour. There she was discovered by Mike Rines, who lived on the Orwell, and, although initially unaware of her literary heritage, considered her a pretty boat that didn’t deserve to die. He brought her back to the Orwell, and with the aid of a single shipwright, set about a thorough restoration. By 1989 she was sufficiently restored to display at the East Coast Boat Show, where she attracted considerable publicity and helped to inspire the launch of the Arthur Ransome Society.

Mike, however, had gone considerably over-budget in his restoration and needed to sell Nancy. The buyer was another Ransome fan, Colin Winter, who made further improvements, including a self-draining cockpit, before he too was obliged to put her up for sale, in 1996.

It was at this stage that members of the Arthur Ransome Society, and others, decided to open an appeal to raise funds to buy her and secure her future. The appeal was successful in raising the purchase price (£25,000) plus a generous surplus for maintenance, and the Trust was set up, and Nancy Blackett purchased in May-June 1997.

All contributors to the appeal fund (around 400 individuals) had the option of becoming Trust members, with their ongoing subscriptions contributing to maintenance and running costs. This remains, with additional fund-raising initiatives, the financial basis of the Trust to the present day, with a turnover of membership – existing members lapsing and new members joining – keeping the total membership at about 400. Anyone can apply to join the Trust and the annual subscription is currently £25 pa.

Nancy Blackett is sailed by qualified and approved volunteer skippers, usually with a competent mate, plus a crew of members who may have, as we say, “all levels of experience including none”. Sailing activities range from short day-trips in the River Orwell up to longer passages, including to Holland, replicating the Goblin’s voyage in We Didn’t Mean to Go to Sea (and Ransome’s own voyage in Nancy Blackett), or down-Channel to the Solent and the West Country).

Maintenance is contracted out to a professional boatyard (Robertsons in Woodbridge) but Trust members play an active role in anti-fouling, varnishing and smaller-scale repairs and improvements.

For young people, the Trust’s offers include ‘hands-on’ visits for schools, and a Young Sailors Fund, providing grants to participate in sail-training and other traditional maritime activities.
----------
Latest News

May 2021 Nancy Blackett celebrated her 90th birthday with a socially distanced birthday party, live music and cake. On May Day she was delivered from the boatyard in Woodbridge to her berth in Woolverton. The Nancy Blackett Trust is planning a season of sailing on the River Deben, once pandemic restrictions allow. Full story

Find out more about The Nancy Blackett Trust here. 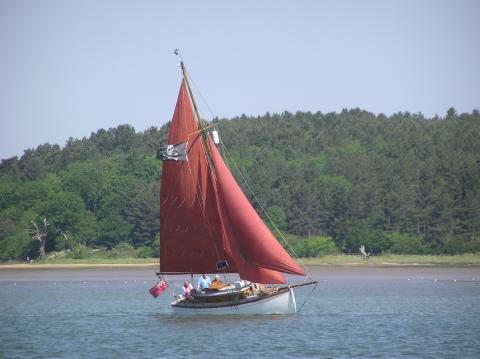