HMS Caroline is one of eight C-class light-cruisers that were ordered under the Admiralty’s 1913-1914 construction programme. Work began on 28th January 1914 at Cammell Lairds shipyard, Birkenhead and the ship was launched on 21st September of the same year, and commissioned on 4th December. During her career, Caroline protected trade by undertaking regular North Sea patrols in WW1 and, later on, convoy screening. She saw action at the Battle of Jutland, the only major naval action of WW1.

With the end of World War I, Caroline was recommissioned for service on the East Indies Station and in 1924 was moved to Belfast Docks to become the static, floating headquarters of the newly formed Ulster Division of the Royal Naval Volunteer Reserve. She is the last remaining British WW1 light cruiser still afloat and the sole survivor of the Battle of Jutland.

On the outbreak of WWII in 1939 HMS Caroline became a depot ship to an anti-submarine striking force of patrol vessels. With the fall of France in 1940 this force was reinforced and soon increased to 70 vessels. Caroline provided signal and cypher facilities to her attached light craft and as the war developed Belfast soon came to play a vital part in the Battle of the Atlantic.

In 1943, Caroline became the strategic operations base for a force of Destroyers and Corvettes protecting convoys in the North Atlantic. Operations were planned and conducted directly from Caroline where a total six escort groups, each composed of six frigates, were controlled.

At the end of WWII Caroline was once again paid off into the Ulster Division of the Royal Navy reserve until 2009. At the time of her decommissioning in 2011 she was the second-oldest ship in Royal Navy service.

The National Museum of the Royal Navy (NMRN) and the Department of Enterprise Trade and Investment have worked as partners to restore and interpret HMS Caroline, a lone survivor and living legend. With the help of a grant of £11.5m from the Heritage Lottery Fund (HLF) the ship opened to all for the first time in June 2016, in the heart of the Titanic Quarter in Belfast.

Caroline has become a venue for lectures on Ireland's shared history, as well as a memorial for the 10,000 Irishmen who list their lives at sea during the Great War.

The historic vessel is also the centre of much community outreach work aimed at groups from all sides of the divide, providing a shared and neutral space for learning about shared history.

August 2020 - HMS Caroline will not be reopening to the pubic this summer:  HMS Caroline is located in Belfast and as such she is governed by a different funding model, through the Northern Ireland Executive. At the moment, they have chosen to keep the ship closed for the remainder of the year.  Do keep an eye out on their social channels for any further updates.  They hope to welcome you back on board again and share the story of this unique survivor.

Find out more about the HMS Caroline & the National Museum of the Royal Navy, Belfast, here. 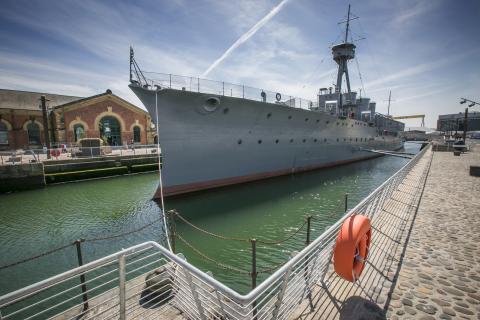