The Restoration of Helen Smitton, Pembrokeshire

The Helen Smitton is one of the first purpose-built motor lifeboats.  When launched in 2020 or Spring 2021 she will be the oldest motor lifeboat in the world in seagoing condition.

Helen Smitton is being reconstructed by Malcolm Brown, a trained and qualified boatbuilder, engineer, industrial archaeologist, academic and consultant to the National Lottery Fund.  Recognising her importance, he purchased the vessel and it is hoped she will eventually return to cruise Scottish waters.

She was built as a non self-righting motor/sailing/pulling lifeboat built in 1910 by the Thames Ironworks, Blackwall, who half a century earlier had built HMS Warrior.  She is largely intact and being reconstructed to original condition using, where possible, the same materials and methods employed in 1910.  She is being reconstructed near Dale, Pembrokeshire.

Helen Smitton was built at a time of great change and debate concerning whether lifeboats should be self-righting or fitted with engines.  The RNLI and lifeboatmen of the past, who were generally men who earned their living from the sea, tended to be a conservative lot, resistant to change.  She has survived for over one hundred years because of superior craftmanship and high quality timber, both of which were readily available prior to the First World War.  She was built for a service life of 25 years, and in that time spent most of it between 'shouts' in a cosy tin shed at the top of the St Abbs slipway, where she was pampered by her crew of herring fishermen.

Her reconstruction has ensured that the vast majority of her construction is still in place; no fibreglass has been used, all her original hull planks and frames remain in place.

When sold out of service by the RNLI in 1936, a fundamental change took place in that she was kept, like most vessels, out on the open where she was now under constant attack from the elements.

Helen Smitton is being reconstructed by Malcolm Brown, a trained and qualified boatbuilder, engineer, industrial archaeologist, academic and consultant to the National Lottery Fund.  Recognising her importance, he purchased the vessel and it is hoped she will eventually return to cruise Scottish waters.

In his paper 'The Reconstruction of Helen Smitton - Methods Employed to Overcome the Effects of Corrosion', Malcolm explains that when conserving or reconstructing a working vessel, he has five things uppermost in his mind:

- the safety of those who come into contact with the vessel
- conservation of the vessel's structure with minimum intervention
- long-term sustainability
- interpretation
- environmental impact of his work.

Problems to the vessel's main structure have been caused by the choice of her original materials, poor maintenance and amateur modifications and repairs.  The greatest problems are:

- associated degradation of adjacent hull timbers below the waterline.

To increase the sustainability of the vessel, changes have been made to the fastenings used, for example: cast steel floors and wrought iron deck knees were fastened with either copper or naval brass.  Where these have been replaced, galvanised steel has been used to reduce galvanic action.

As technical problems arise during vessel reconstruction, there is a balance to be struck between using modern materials in small quantities to preserve original fabric but Malcolm does not use modern materials when traditional materials, such as white lead paste, used in her original build, are still available.

Minimum intervention to conserve as much of the original structure was employed.

Here are some photos showing other projects that Malcolm has recently worked on: 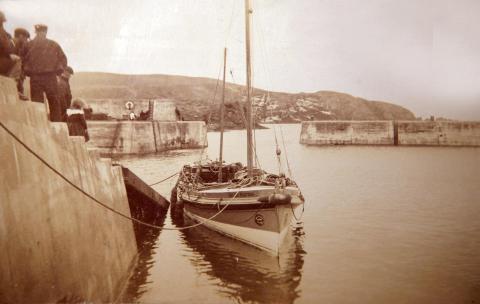