Standard Quay (Faversham) Ltd was set up in 1993 by blacksmith and blockmaker, Colin Frake, and 3 others including Colin's co-Director, Brian Pain (owner of SB Lady of the Lea), who is also founder director of Rochester Independent College.

The Quay is home to several historic ships and boats including barges such as Cambria and Greta, as well as traditional fishing boats, classic tugs and overnight moorings of all sorts!  One of Standard Quay’s classic ‘barn’ buildings, that dates back to the 1700s, is the temporary home of the Cambria Thames Barge Exhibition.
----------
The History of Standard Quay

Ship building and related activities have been documented at Standard Quay since 1720 and it is likely that the history goes further back than this, probably to Roman times.
----------
Facilities available at Standard Quay

• Dry dock suitable for traditional craft of any size up to, and including, Thames Sailing Barges 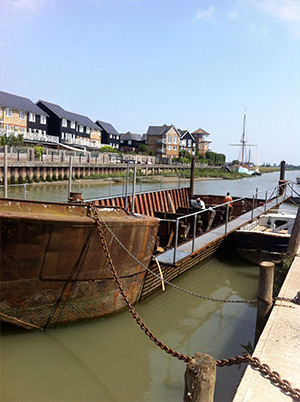 Together with the communally available sail loft and workshop, the dry dock is probably the most important part of the way the Quay operates.  Vessels coming for refits or maintenance will use various facilities in different ways - some involving local skilled shipwrights, welders, blacksmiths, riggers; whilst other jobs are done by the owners only.
----------
The Cambria Exhibition

Launched in 1906, the Cambria was the last Thames sailing barge to trade entirely under sail.  Her working life began as a river and coastal cargo carrier, regularly sailing the London river to the Medway and across the channel to Rotterdam, Antwerp, Dunkirk, Calais and Treport.

Cambria’s cross channel cargoes were pitch, coke, wheat and oil cake.  Her home ports were any harbours between the Humber and Cornwall.

On 6 September 2007, Cambria came to Standard Quay for restoration and rebuilding.  The long process of restoration of the barge began with money from the Heritage Lottery Fund and local support from the town of Faversham and commercial sponsors and ended up costing approximately £1.4 million.

She was re-launched into the Faversham Creek on 23 March 2011 and since her rebuild, Cambria has worked with various charities taking predominantly Young Carers on weekend sailing experiences. She is also used to train personnel for the Thames Boatman Scheme, and other charities training volunteers, particularly people wishing to become mates and third hands, in an endeavour to meet the dearth of people qualified to sail barges. 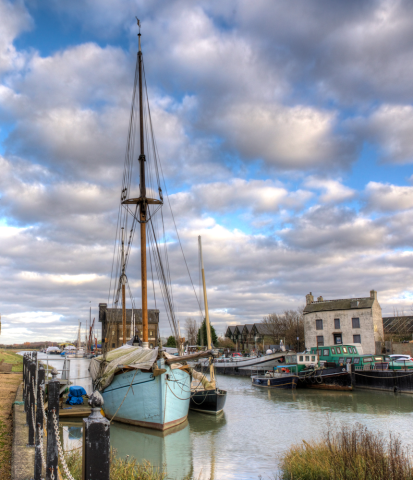