Zebu (originally named ZIBA) was built at AB Torre Holm's Skeppsvarf shipyard in Raa, Sweden in 1938.  She was originally built as a Galleass, but used as a Baltic trading vessel – for which she was rigged as a ketch.  Typical of this type of vessel, she carried a wide range of cargoes including timber, iron ore, and paper. It is believed that during the Second World War she was used to smuggle arms and refugees from Poland and Denmark to Britain.  As a trading vessel, she was in service until the late 1960s, although at some time her rigging was removed, and she became motorized.

During the early 1970s Zebu was used recreationally and had been converted back to a Ketch rig and became UK registered.  She came under the ownership of Mr Nick Broughton in 1983 who had her refitted as a 1870 replica Brigantine at Lowestoft in preparation for her use during Operation Raleigh.  The rig change was necessary as would greatly assist with following trade wind/downwind sailing during the circumnavigation. Operation Raleigh, named to commemorate Sir Walter Raleigh’s first colonising expedition to America in 1584, was a four-year round-the-world expedition launched by HRH Prince Charles starting from the UK in October 1984 when Zebu sailed from St. Katharine Dock on the Thames in London.

The aim was to involve 4000 young people aged 17-24 years, who were called “Venturers”, of many nations (2000 from the UK) in a variety of challenging expeditions mixing adventure, science and rural community aid projects.

Flagship of Liverpool
Following her circumnavigation of the globe in the late 1980’s she found a new home in Liverpool with the Mersey Heritage Trust, where she operated for 27 years.  Zebu underwent another major overhaul and refit that started in 2000. Brigantine Zebu became known as the 'Flagship of Liverpool' having won awards designated by the Foreign and Commonwealth Office and Department for Education and Skills as an exemplary UK learning project in an EU study working with the Swedish Government and earned its status as an 'Investor in People'.

Zebu's decline
Zebu's decline began when in early September 2015 the ship listed to port, with no-one aboard, and sank at her berth in the Royal Albert Dock, Liverpool Work to raise her started late September 2015, by numerous salvage teams.

Three days after she was re-floated, she was towed from outside the Tate Liverpool to Canning Dock, beside the Merseyside Maritime Museum.

The cause of her sinking remains unknown to this day, but a combination of a local power failure affecting bilge pumps, and overdue maintenance is thought to be the probable cause.

Zebu’s current owner, Captain Gerrith Borrett, and his wife Suzi purchased Zebu in January 2017 and together founded Tall Ship ZEBU CIC in February 2018.  Their goal is to restore Zebu to her former glory and eventually get her sailing again as a fine working example of maritime heritage and as an educational outreach platform.   Since 2018, both have been working hard to get Zebu back in shape along with a team of volunteers.

In 2018, Captain Gerrith and his wife Suzi commented:

‘We are glad to say that Zebu is now in a condition where we can safely welcome visitors back on board.’

Reopening Zebu to welcoming visitors was a great accomplishment as they had to fulfil the required risk assessments and obtain the necessary insurances. Since reopening, thousands of visitors have been on board, learning about Operation Raleigh, and the ship’s historical maritime heritage, as well as enjoying the majesty of the ship and, for children, the joy of playing on a “real pirate ship”, Zebu remains a fine example of Maritime Heritage and a traditionally rigged sailing vessel.

For the following 8 months the Zebu team worked hard on urgent repairs to the hull.  With these repairs completed, the ship is now once again safely water tight again and moored up alongside currently in Liverpool’s Canning Dock or Royal Albert Dock and was able to allow visitors on board again during the 2018 Albert Dock's busy season of festivals.

In 2018, during the Liverpool Tall Ships festival, Zebu received 6,000 visitors over 3 days!

Throughout 2019 volunteers have worked on Zebu - stripping out old, damaged wood, the rotten timbers from the deck and below-deck areas, old machinery and the redundant diesel tanks.  Tall Ship Zebu aims to become a 100% renewable energy-powered ship and an example of green sailing for future generations. The first UK Historic Registered tall ship to do!

As well as work above and below decks, volunteers have also helped with welcoming visitors, coordinating and helping out during festivals - such as the Liverpool River Festival 2019 - with Zebu featuring as a major attraction with theatrical performances of ‘Moby Dick’ adapted by the Piasecki and Piasecka Theatre Company. Another theatrical performance took place over the summer - “Canvas & Rum” by North and South Theatre Company – where volunteers also were key in coordinating together with other smaller scale annual pirate shenanigans in Canning Dock, Liverpool.  Zebu has also hosted several private functions and educational outreach workshops throughout 2019.

In summer 2019, the hull and deck were stripped of old paintwork and new canvas covers were designed and fitted to protect the ship. New user-friendly information signage was added for a better visitor experience, and 4 outreach workshops have been developed for educational groups.  Caulking and repainting the entire hull above the water line was completed along with repairs to the bow and servicing the rigging.  A new state-of-the-art auxiliary electric motor is now almost ready for sea trials - with new safety and navigational gear completing the statuary requirements.

Tall Ship ZEBU CIC has also worked with MAST (Mersey Side Adventure Sailing Trust) to give prospective sail trainees a 'Tall Ship taster'.  Many local Liverpool schools and colleges have visited ZEBU as part of their educational projects.  Whilst on board they learnt about Maritime Heritage, including – as an example - ways in which sailing heritage has influenced the English language through words and expressions.  Students also learnt about rigging and points of sail, as well as observing mast climbing demonstrations.  The hands-on learning which takes place on board Zebu offers students an interactive, beyond-the-classroom immersive experience – filling a gap with a desire to learn more about the golden age of sail in Britain and the world.

The Liverpool community has benefited from having at its maritime centre, a heritage tall ship such as Zebu, one of the last functioning traditionally rigged wooden ships based in the North West of England, as a living example of maritime heritage accessible to the public on a  daily basis.

There are plans for the near future with Tall Ship Zebu (2021-2024) to become ‘The UK Sea Messenger’ - a sustainable outreach adventure. In short, the drive and passion as Tall Ship ZEBU CIC is to safeguard, remember and record the rich and fascinating UK maritime heritage and the history of Zebu, as well as inspiring future generations of young sailors.
----------

May 2021 Tall Ship Zebu got into difficulties off Holyhead on 15th May while sailing south from Liverpool. The team worked hard to save her, but she was subsequently severely damaged by storms and declared a wreck. Read more. 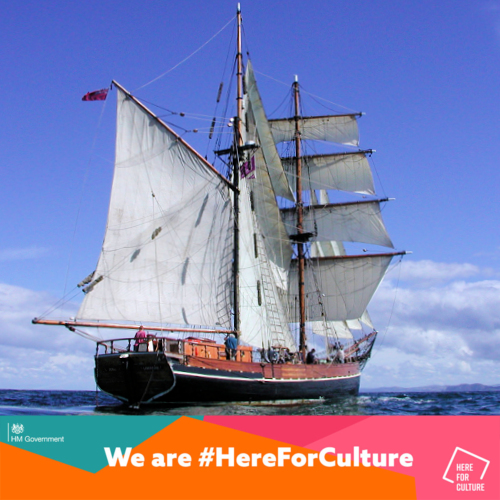 The team have been awarded funding from the government's Culture Recovery Fund for Heritage which will help launch the 'Zebu Sea Messenger' initiative that will combine the presence of the historic Tall Ship Zebu with promoting both the UK's vast maritime history and awareness of marine environmental concerns to the coastal communities.

September 2020 The team have also reached another milestone! The MCA have inspected the ship and have given the all clear for Zebu to set sail again.

April 2020 Tall Ship Zebu depends on support from the public and other donors to fund the upkeep and proceed with the conservation of the historic sailing vessel.  They have already achieved so much and have positively affected the lives of everyone who has been involved with her.  With your support, the Team will be able to continue to recover and restore the ship ready to sail with new generations of sail trainees and ensure the maritime heritage outreach message is publicised.