The Thames Sailing Barge Trust (TSBT) is a registered charity that exists to preserve two Thames barges in sailing condition and was formed in 1948.

The Trust aims to improve the understanding of the public as to the historic and cultural role of Thames Sailing Barges in the heritage of Great Britain and to promote and teach the practice and the traditions and skills of seamanship involved in the handling and maintaining of these craft by taking people sailing in the waters traditionally sailed by these craft. www.bargetrust.org

TSBT is a volunteer run, non-profit company and all sailing fees and membership subscriptions are used to maintain and restore the barges and meet their operating expenses.

Constructed in 1895, Centaur is one of the surviving operational wooden barges from the well-regarded barge builders 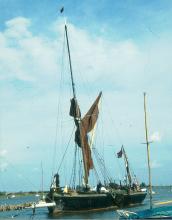 John & Herbert Cann. She was launched at Harwich and took part in the traditional barge races from build.

During her service in the coastal trade, she visited ports of France. Belgium and the Netherlands. She continued trading throughout the First World War, then carrying coke and pitch, before entering the grain trade. From 1933 she joined the Colchester fleet of Francis & Gilders Ltd, which merged with the London and Rochester Trading Company in 1951. Her registration was closed in 1955 and she became an unrigged timber lighter. She was subsequently sold to the Thames Sailing Barge Club (now Trust) who, since 1977, have conserved and reconstructed her over 35 years mainly with volunteer labour. During this time she has continued to race regularly, winning the Inter match Trophy in 1993.

Centaur continues to operate on the East Coast in her original heritage setting and with the same rig as in her cargo-carrying days. The Trust retains the use of rope made from natural fibres such as hemp and sisal and wherever practical, traditional materials and methods are used.

Pudge was built in 1922 by London & Rochester Trading Co. and is a Thames sailing barge with a hull construction of pitch pine on oak with a flush deck, the steering wheel on a ‘short spindle’ without the usual raised cabin top.  Originally spritsail rigged with bowsprit an auxiliary oil engine made by The Bergius Co. Ltd of Glasgow was installed in 1932.

Pudge is one of the last wooden barges to be built, (although further barges were built of steel).

A survey found that conservation work was required on Centaur, the first major conservation the historic vessel had undergone since 1995. She was constructed with two layers of bottom planking: a two inch inner layer and a one inch sacrificial outer layer, which protects the inner layer of the hull.

Following 118 years of working, the sacrificial planking fore and aft were wearing thin and needed replacing. The inner two inches (which are the vessel's original bottom from 1895) were sound, except for one or two timbers at the stern which were replaced in elm, as per her original planking.

The sacrificial layer were replaced in hardwoods Opeipi and Iroko, taking around 20 weeks to complete.

In August 2013 the TSBT confirmed funding of £100,000 from HLF enabling the work to be undertaken.

Roger Newlyn, Trustee and Chair of the TSBT said: “We’re delighted that the Heritage Lottery Fund has given us this grant. Centaur carried bulk cargoes on the Thames Estuary and the rivers of Essex, Suffolk and Kent for over sixty years and these days she is central to the Trust’s aims of passing on to the next generation the traditions of  sailing and maintaining these iconic East Coast vessels.”

The project allows the Trust to work with a number of outside organisations that already provide training for working on wooden vessels.

Tom Browning, an apprentice from the Faversham Creek Trust, worked on Centaur.  He achieved his Level 2 apprenticeship with Simon Grillet, during the Cambria restoration at Standard Quay in 2011. He undertook his Level 3 training through this work experience.

The reconstruction work was carried out at Oare, Faversham, under the management of shipwright Tim Goldsack.

The Trust also uses Centaur as a means of training volunteers to be skippers and mates, ensuring the future of the vessel's sailing activity.

When the sacrificial bottom planking was replaced, Centaur was able to obtain a new 5 year MCA certificate. Given her condition generally this means it will be at least 10 years before any further major conservation work will be required.

The best way of maintaining Centaur is to sail her regularly, which also generates income. Without this work, the barge will lose funding for ongoing conservation, potentially causing her to become static and derelict.

A new education programme working with sea cadets, schools and special need groups will be facilitated by this project, helping to engage a wide reach of people with maritime heritage.

The Trust aims to include sailing days for special needs groups, sea cadets and school children.

The Thames Sailing Barge Trust which is based in Maldon, Essex has now received “permission to start” from The National Lottery Heritage Fund for the Perpetuation of the Thames Sailing Barge “Pudge” project. The project aims to restore “Pudge” by replacing her decking and hatches, improving her facilities and accommodation, researching and interpreting her heritage and addressing the skills shortage in the Thames sailing barge community.

The Thames Sailing Barge Trust has reached this milestone by managing to raise the remaining funds to cover the costs of the project after being awarded a grant of £328,000 from The National Lottery Heritage Fund.

On Friday 10th May, the Trust will hold a special launch event to celebrate the start of the project which will last for approximately 2 years.

The Rt. Hon. John Whittingdale OBE MP, Member of Parliament for Maldon said: -   “I am delighted to learn that the Thames Sailing Barge Trust has, with the help of The National Lottery Heritage Fund, raised enough money to proceed with the restoration of SB Pudge.  For many people, the Thames barge is the symbol of Maldon and the Trust does great work in maintaining the two it owns and at the same time helping to keep alive traditional shipbuilding skills”

Brian Dawson, Trustee and Chairman of the Thames Sailing Barge Trust, said:- “As “Pudge”, our veteran Dunkirk Little Ship approaches her 98th birthday it is great news to know that The National Lottery Heritage Fund are supporting the Thames Sailing Barge Trust in our objectives of conserving her for future generations. In addition, it will give us the ability to educate those future generations with the skills to sail and maintain such craft”.

Using local skilled craftsmen, assisted by a team of volunteers and trainees, the project will replace decking, hatches and any weakened structural timbers on “s.b.Pudge” to keep her as a licensed and sailing member of the historic Thames sailing barge fleet for many years to come. In addition, she will be refitted to make her more attractive for people to sail on and to visit her to learn about the heritage embedded in the vessel, her traditions and her trade.

Finding experienced crews to sail “Pudge” and other Thames sailing barges is becoming an increasingly difficult task, as older generation of skippers and mates are retiring. The Trust will embark on a structured training and accreditation programme which will develop the skills and experience of up to ten people a year as third hands with the objective of creating the next generation of mates and skippers.

The Trust will also work with the local museums to collaborate on temporary displays interpreting the history of Thames barges, co-created with local media students. By working with schools and youth agencies, the Trust aims to change attitudes towards maritime heritage and improve people’s understanding of it, by considering a career or volunteer role in sailing heritage vessels. The Trust will also enhance its volunteer recruitment programme, to ensure it has the resources to maintain “s.b.Pudge” and have people able to impart information to the public about the barge on their regular open days. 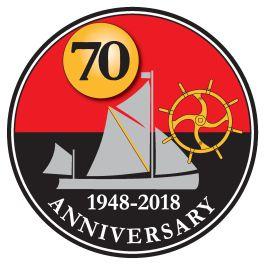