Torbay Lass was built in 1923 and fished under sail until 1938. She was used as a sail training vessel for more than 50 years, but has fallen into disrepair and was in danger of being lost until the Save Torbay Lass campaign was started.

In October 2013, Trinity Sailing Foundation received first stage approval from the Heritage Lottery Fund for a grant of £900,000 to restore and preserve the historic Brixham sailing trawler, Torbay Lass.  The first stage of the application was to provide funds with which to carry out temporary repairs to the ailing vessel and draft the detailed bid for the major grant. The round one success was to allow Torbay Lass to return to Brixham harbour under her own power, and there await the final decision about her future.

As well as funding the major task of restoration, which was to be carried out ashore in Oxen Cove over a two to three year period, the second round application was to cover:

- Apprenticeships in shipbuilding and repair
- Training courses for young people in marine skills, from engineering to shipwrighting
- Opportunities for volunteers in various roles, including assisting with practical work, acting as guides and carrying out research for a community project
- The creation of a Heritage Trail in the town
- The launch of a Conservation in Action programme, led by volunteers
- Opportunities to learn traditional seamanship on board vessels run by the Trinity Sailing Foundation – Leader, Provident and Golden Vanity, as well as Torbay Lass once restoration is complete.

Unfortunately, the project stopped as additional support could not be secured to enable the full funding for the second stage application, including the rebuild, to go ahead.

The vessel remained in poor condition at Tilbury Docks until she was forced to leave.  The Maldon-based charity Heritage Marine Foundation offered her a secure mudberth while her future could be secured and she moved from there under her own power to Downs Road Boatyard in Maldon, Essex, where she remains.

Heritage Marine Foundation applied for a first stage funding to develop a new project plan that would have included the major task of restoration, to have been carried out in a dry dock at Downs Road Boatyard. As well as the restoration, the project would have covered:

- the development of a specific apprenticeship scheme dedicated to the Maintenance, Operation and Conservation of historic and traditional vessels

- the employment and training of x16 apprentices

- training courses for young people in marine skills, from engineering to shipwrighting

- opportunities for volunteers in various roles

- the creation of a Heritage Trail in the town and promotion of the port as a Heritage Harbour.

Unfortunately the stage one application was rejected and the project was put on temporary hold.

Heritage Marine Foundation are in the process of developing another project proposal that will hopefully achieve funding support. 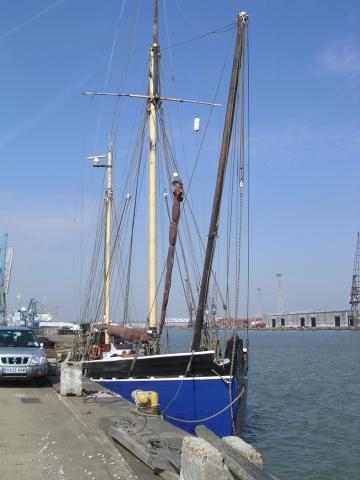