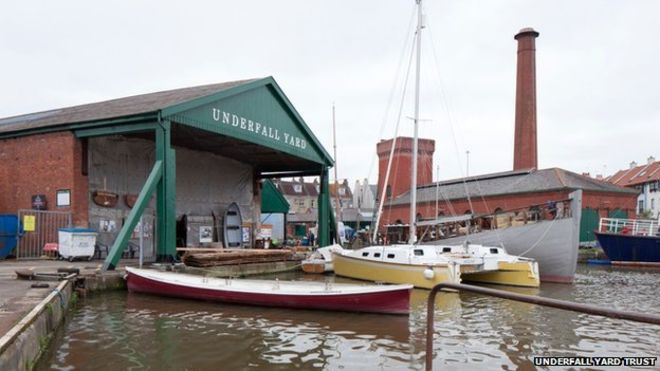 Underfall Yard is home to maritime businesses involved in boatbuilding, marine engineering, metal working and training. Both the Harbour Master and the Docks Engineer are based there.

The story of Underfall Yard

Since the creation of the Floating Harbour in Bristol 1809, Underfall Yard has been crucial to its operatoin and maintenance.  Before this time, much of the site was under water; the original course of the River Avon ran through Underfall Yard.

In 1809, as part of the creation of the Floating Harbour system, William Jessop developed the Overfall dam across the River Avon allowing surplus water from the harbour to flow into the New Cut.  The river water carries lots of silt and as it enters the Floating Harbour, it slows down causing the silt to settle in the harbour.  This silt builds up and reduces the depth making it difficult for ships to navigate.  The Overfall dam had sluices next to it, which could be used to remove the silt, but the main method was to empty the harbour and dig it out.  This process of digging the mud out was hugely disruptive to shipping and trade.  In the 1830s, Isambard Kingdom Brunel was asked to propose a solution.  He suggested further developing the original sluices and recommended the use of dredgers, a type of boat, to remove the silt.  The sluices have been changed and renewed several times since and today's sytem was installed in the 1880s.

In the 1880s, under Docks Engineer John Ward Girdlestone, the whole yard was rebuilt to provide a single site for the workforce who maintained the city docks including: plumbers, electricians, blacksmiths, divers, engineers, fitters, shipwrights and many more. It is one of the only surviving Victorian dock workshops in the world.

Now our Visitor Centre, the Power House was completed in 1887 and converted from steam to electricity in 1907. It was operational until 2010. Three large pumps draw water from the harbour and pressurise it before distributing it around the harbour, via the accumulator. The hydraulic network supplied power to cranes, swing bridges, lock gates, sluices and other functions around the docks.

Now the Yard's Visitor Centre, the Power House was completed in 1887 and converted from steam to electricity in 1907.  It was operational until 2010; three large pumps drew water from the harbour and pressurised it before distributing it around the harbour, via the accumulator.  The hydraulic network supplied power to cranes, swing bridges, lock gates, sluices and other functions around the docks.

There has been a slipway at Underfall Yard since at least the 1850s, when boatbuilders Ross & Sage built it.  In 1890, Docks Engineer John Ward Girdlestone ordered the current slipway to be built, but it fell into disuse in the 1980s and was one of the first refurbishments by the Underfall Yard Trust in the 1990s.  This sort of slipway, known as a 'Heave-up Slip', was patented in 1819 by shipbuilder Thomas Morton of Leith, Scotland.

With the support from the National Lottery Heritage Fund, the Yard aims to share understanding, knowledge and enjoyment with communities far and wide.  This is being achieved through projects, such as:

Sharing Memories Project - with support from the Oral History Society, x10 volunteers were trained to interview and record memories of Underfall Yard; a treasure trove that has been shared in their Visitor Centre and on Vimeo.  If you have a yard yarn, a fall fable or a muddy memory, please contact Andrew Blayney: andrew@underfallyard.co.uk

Community Learning Page - in 2016 the team worked with Bristol City Council to run a pilot adult learning programme.  x3 adults attending an 8-week 'Discovering Underfall' programme that taught them to:

They are hoping to run similar courses in the future for adults seeking ways into or back into work. Please contact Andrew Blayney for more information: andrew@underfallyard.co.uk

Research Project - in 2015-16, a dedicated team of volunteers spent over 1,000 hours scouring collections held in Bristol Records Office, M Shed, National Archives, British Library and many more to uncover fascinating stories about Underfall Yard.  The results are proudly on display in their Visitor Centre and downloadable resources are available here.

Orchard School: Developing the Visitor Centre - in 2015-16 the team worked with x10 students from Orchard School to help get the Visitor Centre right.  They worked diligently to get the text, images and games correct.  The English as a Second Language department helped to translate some of our key vocabulary into different languages so that it is accessible to as many people as possible.

May 2021 Underfall Yard will host the photo Exhibition The Floating Harbour by Jem Southam as part of Bristol Photo Festival 2021. Read more

April 2021 A new live webcam has been installed at the top of Underfall Yard's Accumulator Tower to capture the view of Bristol Harbour and SS Great Britain. Read more

October 2020 Underfall Yard Trust receives award from Government's Culture Recovery Fund to improve their outside event spaces and create new ways of interacting with our visitors from Bristol and further afield. Full story

A crowd gathered outside the Underfall Yard Visitor Centre on 21st May to celebrate the arrival in Bristol of the Poly-Roger, a punt made from 99% recycled plastic.  In light of the climate crisis, the punt is one of three touring the UK in an effort to bring the problem of plastic pollution to those in cities. 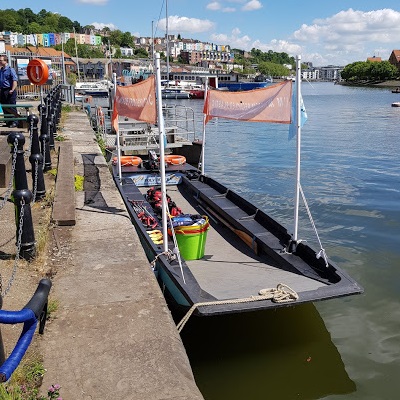 Underfall Yard Volunteers and staff were updated by Bristol City Council's Docks Engineer Ian Johnson on his plans for the Harbour in 2019 and beyond.  Questions were invited about water management in the harbour and many interesting points were highlighted as a result:

Underfall Yard has many volunteering opportunities in several different roles from explaining the Yard and the Harbour to visitors to helping repair historic machinery in their workshop. Please see here for more information.