The Humber is said to be one of the world's most treacherous rivers to navigate and Light Vessel 12 was built in 1927 for the Humber Conservancy Board as a dedicated lightship by the Goole Shipbuilding & Repairing Company.  Its purpose was to be a mobile lighthouse anchored at the mouth of the Humber Estuary and was commissioned as the Spurn light vessel, the first on that station, when it was positioned on 17 November 1927 around 4.5 (7.2km) east of Spurn Point.

It marked shoals as required and used its lantern and foghorns to alert shipping to the dangers of running aground.  Equipped to transmit three types of fog signal for use when required, operating in conjunction with each other, the ship could simultaneously send out a 50-mile radius fog signal and a 20-mile radius submarine signal to warn approaching vessels using Morse code.

During the Second World War, the lightship continued to serve in its vital role and was moved to the middle of the Humber Estuary.  Then, after the war, the vessel was returned to her pre-war station until 1959 when it was removed for refitting.  After that, she was transferred to the Bull Shallows station and was known as the Bull Light vessel until its withdrawal from service in November 1975.

In 1983 Hull City Council bought the vessel for £4025 and began restoring it to its original condition.  Since 1987 she has been on display to the public. 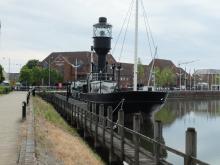 As part of the the Hull: Yorkshire's Maritime City project (HYMC) project, the Spurn will play a part in a programme of activities and events in Hull marina that will allow visitors to gain a greater understanding of the vessel’s role in the history of Humber shipping and of the wider story of one of the UK’s busiest international ports.

Hull Marina is also home to several other historic vessels including those owned and managed by the Humber Keel and Sloop Preservation Society.  Their two vessels are of a type that was once a familiar sight in the docks of Hull and on the rivers Humber, Trent and Ouse.  Produce and raw materials were transported throughout the region from the C12th on these types of sailing barge. 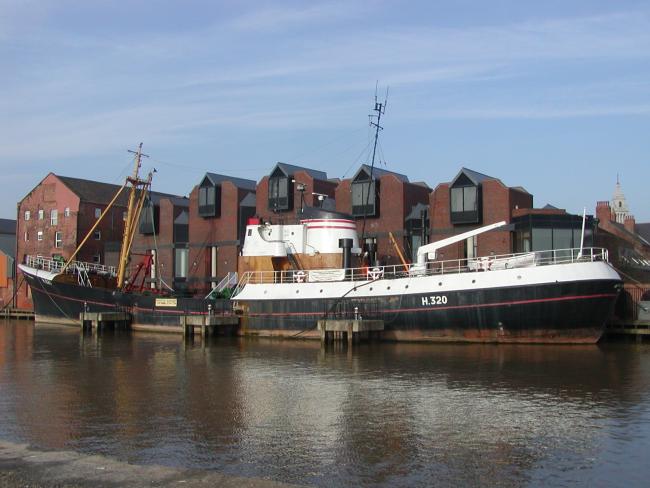 Arctic Corsair was built in 1960 as a 'sidewinder' trailer for the Boyd Line in nearby Beverley Shipyard by Cook, Gemmell & Welton. It was the second diesel-engine trawler built at the yard for the Boyd Line to operate far from its home port for demersal fishing in Icelandic fishing grounds and those further afield including Bear Island and Newfoundland Grand Banks, where it had to fish as a result of over-fishing in near and middle waters.

Arctic Corsair represents the technological peak of sidewinder trawlers and almost a century of refinement of the three key developments that turned fishing into an industry - efficient mechanical propulsion allowing ships to travel greater distances for longer periods; artificial ice production, and the invention of the Otter trawl.  Trawler technology was developed to meet the challenge of covering great distances in extreme conditions then locating and catching a diminishing natural resource in a way that was commercially viable.

The Arctic Corsair is a key heritage asset for the interpretation of this important history and is the UK's only distant water sidewinder trawler that can be accessed by the public. 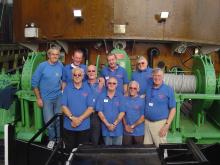 Arctic Corsair was bought by Hull City Council (HCC) in 1993 and in 1996 the Heritage Lottery Fund (HLF) awarded £159,700 for the creation of an exhibition berth for the ship.  After being restored by trainees and volunteers from the St Andrews Fish Dock Heritage Group (STAND), the floating museum opened to the public in 1999.

Funding Boost as Hull's Maritime Heritage project reaches milestone - the team behind the project has secured more than £255,000 to conserve many of the city's priceless maritime treasures.  Funding from the John Ellerman Foundation, of £170,000, and Arts Council England Designation Development Fund, of £88,113, will contribute to a previously identified £2.6m funding shortfall to support the wider £27.4m Hull: Yorkshire Maritime City project.  Read the full story here.

Arctic Corsair has been moved to Alexandra Dock where she is being berthed temporarily to allow flood defence work to take place on the River Hull, before moving once more for restoration at a dedicated specialist shipyard.
----------

The Arctic Corsair is operated in partnership with local fishing heritage organisation STAND which provides all year round voluntary maintenance and seasonal (April - Nov) tour guide personnel, allowing the public to experience how life was onboard a deep sea trawler.  As part of the Hull, Yorkshire's Maritime City Project, the Arctic Corsair is the focus of a wide range of exciting projects including working with schools, colleges, maritime training organisations, theatre groups, musicians and many more. 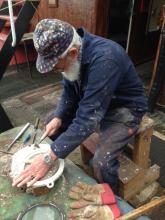 Maritime Skills training
The HYMC project is teaming up with East Coast Maritime Training to deliver maritime skills training to 100 young people from the region. ECMT, based in Withernsea of the East Yorkshire coast is a Seafish Approved Training Provider and equips young people with the skills and accredited learning to build a career in the fishing and offshore industries. As part of their HYMC supported programme, young people will get the opportunity to gain skills and knowledge from former Hull fishermen now working as volunteer guides and maintenance crew on board the Arctic Corsair.

New Media project
Working with Hull College BA Computer Games Design students, the New Media project will allow students at the college to bring the story of the Corsair to life using new technologies and processes to allow future generations to continue to be inspired by the stories of the people who served in Hull’s distant water fishing fleet. The first pilot has already taken place with the students producing a virtual 3D reconstruction of the Corsair’s wheelhouse.

Swinging the Lamp
Based on the life of former Hull Skipper and Arctic Corsair patriarch Jim Williams, Swinging the Lamp is a play and musical journey into the heart of the distant water fishing heritage of the city. It was recently performed to sell out audiences in the fish hold of the Corsair and at the Ferens Art Gallery.

Watch Ron Wilkinson on trawling, STAND's and the volunteers' role in saving the ship originally: Trawleman's Tale, by the Yorkshire Film Archive.