About the The Steam Tug Kerne Preservation Society 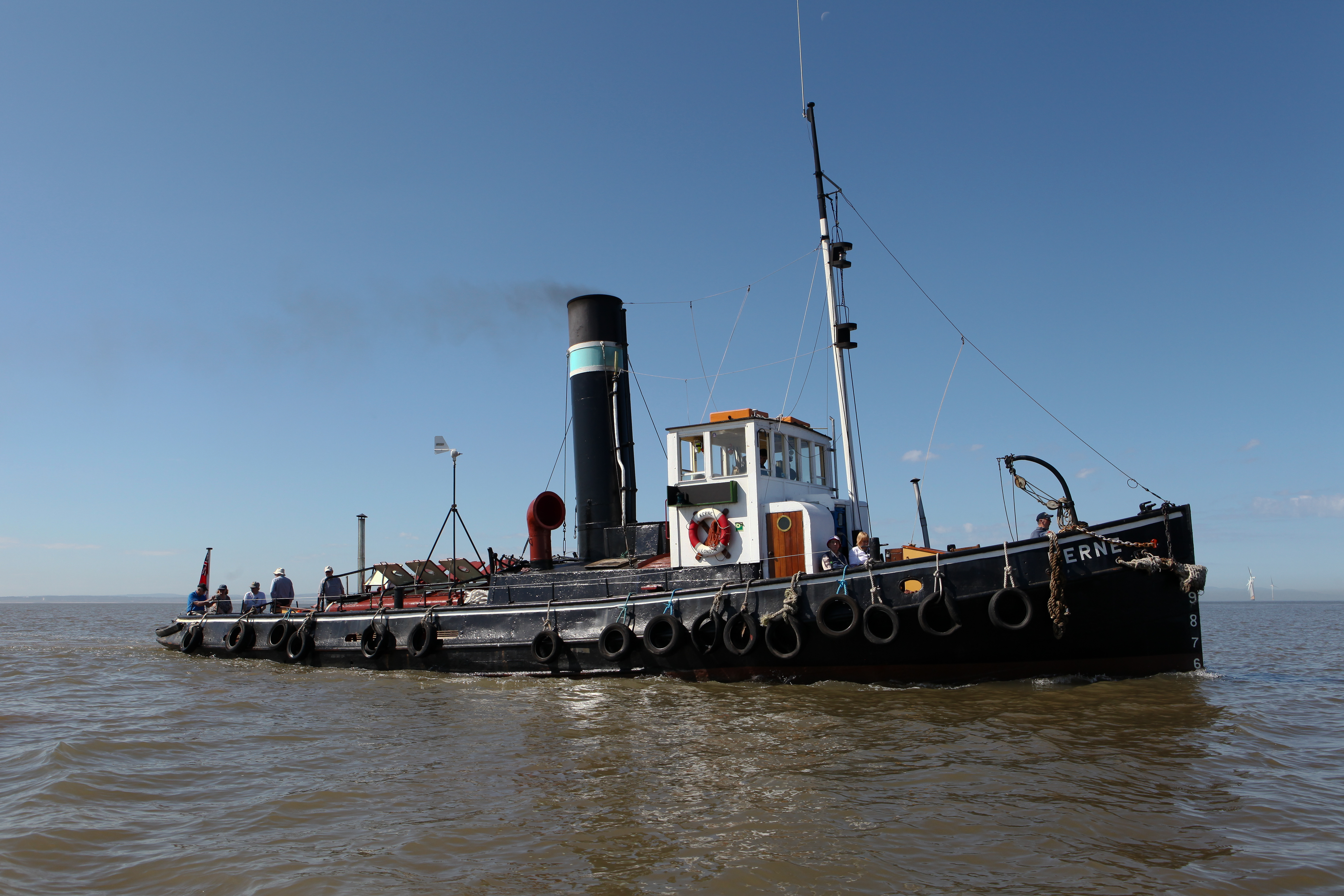 The Steam Tug Kerne has been in preservation by the same voluntary group since 1971, they set up the North Western Steamship Company Ltd., and later The Steam Tug Kerne Preservation Society Ltd.  In 2008 in order to promote the preservation and maintenance of this historic vessel the society became a registered charity.  The company and society maintains and runs the tug to provide a means of education into the history, development and operation of Kerne as a piece of living social history and to demonstrate the working conditions of crews of early 20th century steamships.

Kerne is kept in working condition and steams to public events around the waters of the North West of England.  In 2014 the Steam Tug Kerne Preservation Society, in partnership with The North Western Steamship Co Ltd., were delighted to receive funding from the The Heritage Lottery Fund to enable essential hull repairs to be carried out at Cammell Laird’s yard in Birkenhead.  The funding also enabled the Society to improve the quality of their educational displays and presentations. 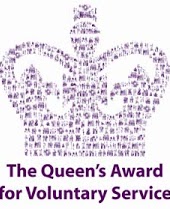 In June 2018 in recognition of the efforts of the preservation group volunteers for over four decades, the Society was honoured to receive the Queen’s Award for Voluntary Service.  This award is the equivalent of an MBE, and the highest award given to voluntary groups.  It is also the first time Her Majesty has honoured an historic vessel preservation group in this way. 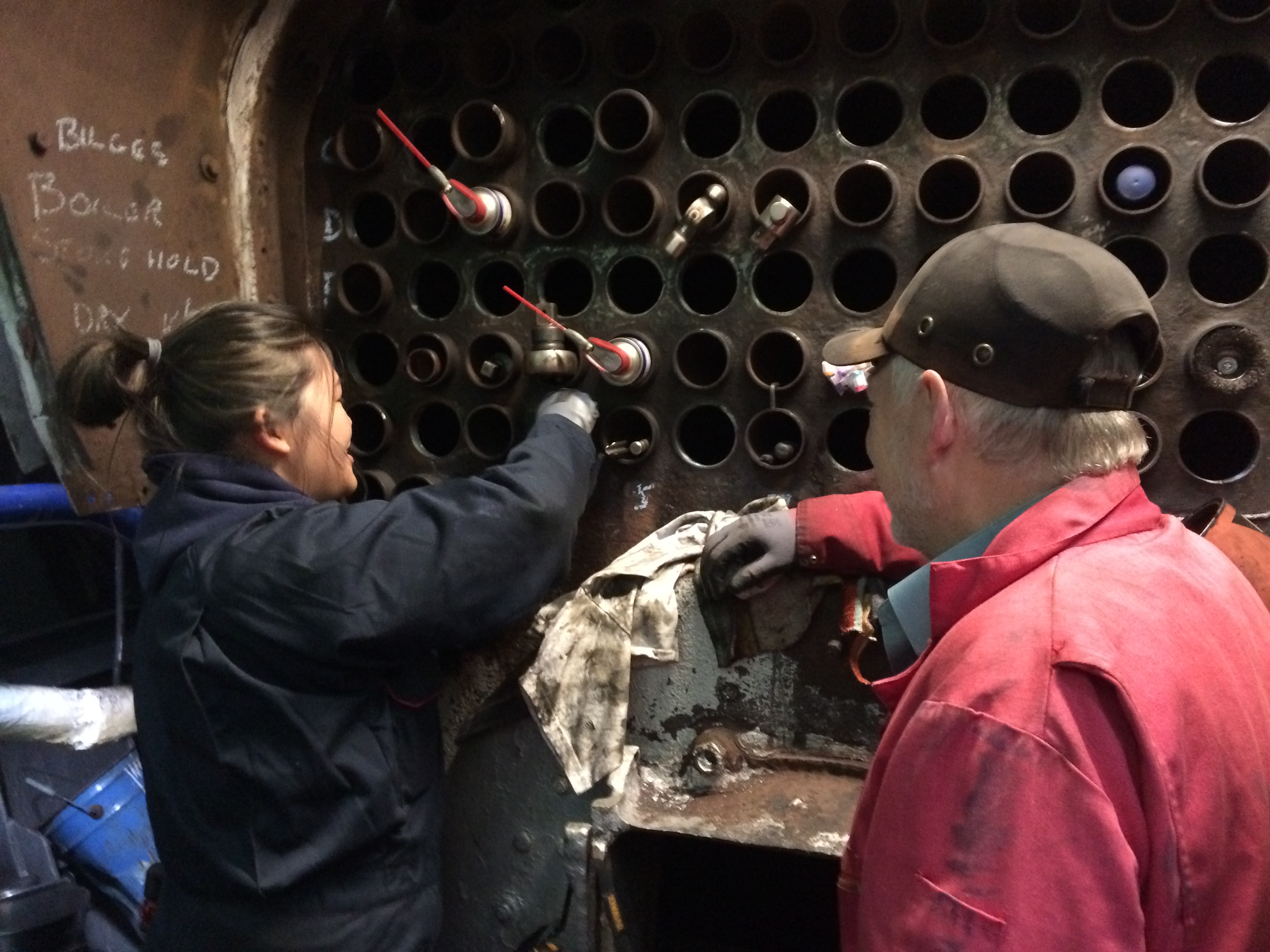 Also, in October 2018 we were honoured further by Her Majesty, with a grant from The Duchy of Lancaster Benevolent Fund.  In the same month they were able to announce that the Society had been awarded a further grant from The Heritage Lottery Fund under the 'First World War Then and Now' scheme which facilitated the replacement of boiler stay tubes, training of young people in heritage boiler repair skills, and research into the vessels role and those of tug crews during WW1.

Steam Tug Kerne was built in 1913 and named H.M. Tug Terrier until 1948.  She is the last operational coal fired naval steamship from WW1 and due to a dedicated band of enthusiasts, she can still be seen steaming around the waters of North West Britain.

During the Summer months, when not attending an event or out on a cruise, Kerne can often be found berthed at the Maritime Museum in Liverpool’s Canning Dock, and at other North West Ports.

June 2021  The Foyle Foundation have awarded the Steam Tug Kerne Preservation Society a grant of £5,000 for the conservation rebuilding of the smokebox and coal bunkers aboard Kerne.  Full story

March 2021 Golden Jubilee Appeal - in their 50th year of preservation, they would like to appeal to your generous nature and ask that you consider helping Kerne to mark her anniversary and also to enable her to thrive into the future. Full details

September 2020 - Lots of hardwork on the slipway has been undertaken: new anodes welded on, paintwork progressing to the tie coat and the volunteers repacking the stern gland. 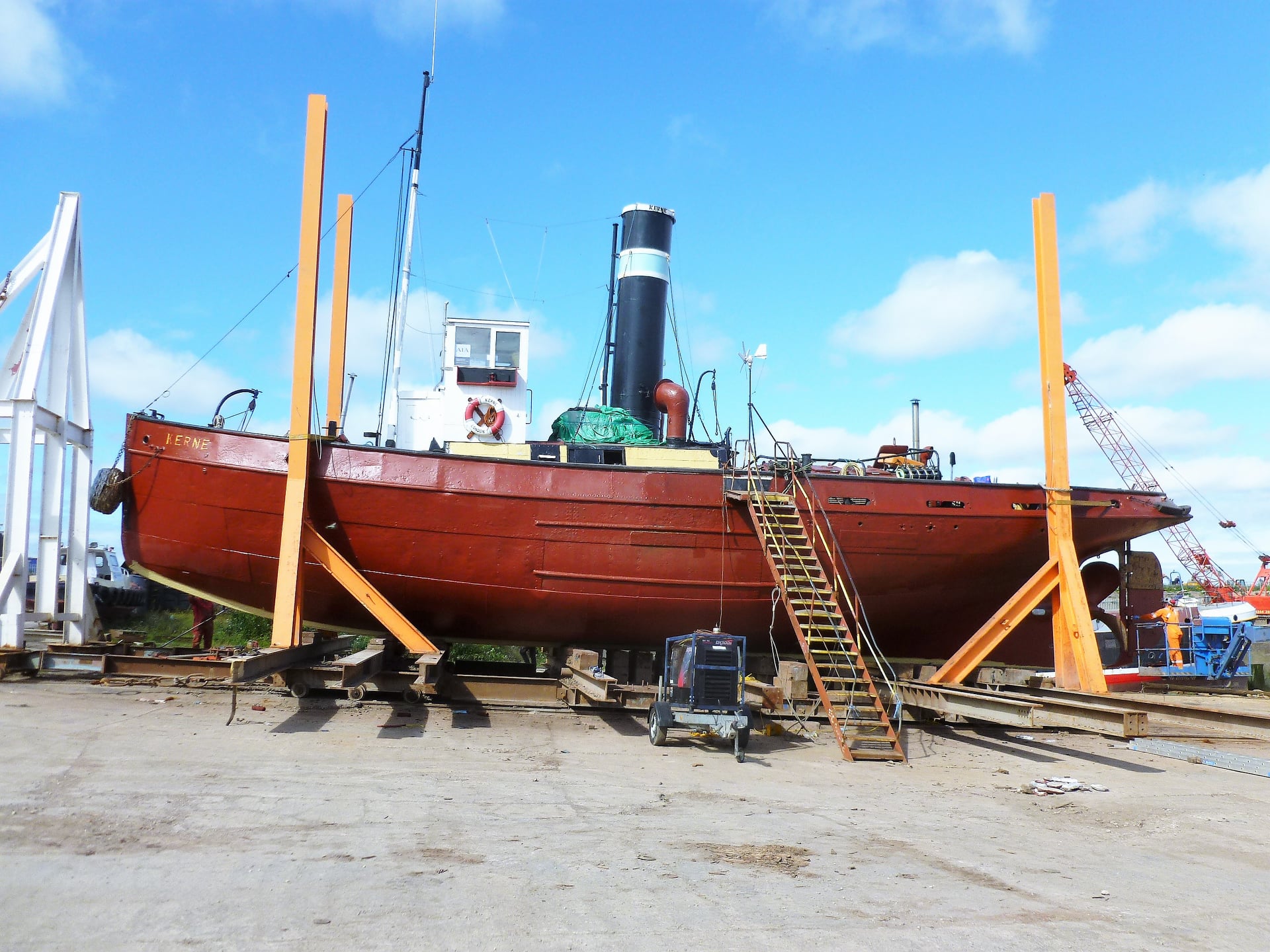 August 2020 - It's full steam ahead for the Kerne following a life-saving £9,600 Heritage Emergency Fund grant to get her back on the waves.  Full story

January 2020 - There is no rest for the wicked in the world of maritime steam preservation, so it was back to it in the first week of the New Year.

In the Wheelhouse the steel bearers for the decking were bolted into place.  Due to the curvature of the boiler casing onto which the wheelhouse is secured the bearers provide a level support for the decking, and importantly, by keeping an air-gap between the steelwork of the casing and the timber of the decking, this should reduce surface corrosion of the new platework that was welded into place last year.  The decking itself consists of reclaimed timber hatchboards which are cut to length (fore and aft) and notched out to accommodate the securing bolts of the bearers, together with the telegraph, Engine Room voicepipe, steering windlass and oilers. The original timber decking was laid port to starboard across the Wheelhouse, directly onto the steel casing in the middle of the deck, with timber battens placed fore and aft to take up the curvature at the sides. These battens created a trap for any water that got in, thus creating the corrosion that was evident to the platework when we removed the original decking. A further bonus of the shorter deck timbers is that they will be easily removable for maintenance and painting of the casing top. All the timbers are now in place. The telegraph itself had been removed from the vessel, and the cast base has now been stripped of the numerous coats of paint it has received over the years, beautifully repainted in Liverpool Lighterage blue and refitted.

On the subject of refitting, the exhaust from the diesel generator has been refitted, albeit in a slightly less obtrusive position on the port side of the wheelhouse.

Moving to the Forward Cabin, a new removable cover has been fashioned to cover the top of the scuttle, which will eliminate the rain water that manages to drip in via the sliders of the hatch itself.

Going further forward we had an exciting couple of hours fitting the bow fender made for us by our friends aboard the Daniel Adamson. It was certainly of some weight, and we needed the assistance of the Hiab crane of the Seaport Alpha (ex TID 43) to sling it from the quay onto Kerne’s stem post. It is now securely chained to the top eyes, but a couple of bottle screws are needed to secure the side chains.

Down below, we are now awaiting the threaded boiler tubes so we can get on with the installation, but in the meantime, we are cleaning up the boiler face ahead of the fitting of the new smokebox bottoms, and are replacing the studs that hold the port and starboard firedoor assemblies in position.

Whilst none of the volunteers have admitted to making a New Year’s Resolution, we all crack on with the collective goal of steaming in 2020.

Find out more about The Steam Tug Kerne Preservation Society