SYMBOL is a canal fly boat, built by the Shropshire Union Railway and Canal Carrying Company at Trevor Wharf, Wrexham in 1914. Her fleet number was 698, her original Chester 'Public Health' registration number was 732 and her British Canal Navigation gauge number was 771. Her hull is carvel built with oak sides and frames and an elm bottom. She also has some iron frames, fastened with clenched iron nails. She has a pointed bow with a plumb curved stem and a pointed stern. She has a steering deck and an open hold, and was originally horse-drawn as a Shropshire Union Fly Boat, then used as a general goods carrier until 1921. Subsequently, she became a general goods carrier for the LMS Railway Company (then British Waterways) in the Birmingham and Midlands canal area. In the late 1950s, she was sold and converted into a pleasure craft. Her hull survived basically unaltered, although she had standard repairs carried out. About 1960, she was purchased by the late Peter Froud of Inland Waterways Holiday Cruises Ltd. She was sold again in June 1962 to Joyce and Peter Fox for £75. They collected her from Stourport and converted her for private use at Cosely, fitting a Hotchkiss Cone propeller propulsion unit and then a conventional drive from a Lister diesel engine. The Foxes sold SYMBOL in October 1966 to Charlie Cartwright. Charlie and his wife cruised extensively and did considerable work on the vessel, keeping her near Lichfield on the Trent & Mersey Canal. They planned to donate her to a specialist society. However, SYMBOL was first moved to Chester and kept at Tower Wharf with the agreement of Norma and David Jones of David Jones Boatbuilders. She was then taken to Trevor, where British Waterways were planning a visitor centre to promote the nearby famous Pontcysyllte aqueduct. SYMBOL was in poor structural condition and a full restoration was needed. It was expected that the rebuilding work would take two or three years, but she would be on public display whilst the work took place in the dock where she was originally built at Trevor. Upon completion, it was intended that SYMBOL would tour the waterways, promoting the campaign to preserve Britain's waterways system. She would be a regular visitor and exhibit at canal museums and events, with particular emphasis on the Ellesmere Port Boat Museum; the hub of the Shropshire Union fly-boat service. Financial difficulties held up the restoration and SYMBOL deteriorated rapidly. In 1999 the stern fell off into the dock and then the stem post and bow followed suit. Her remains were dismantled, the ironwork was labelled and stored and the wood was consigned to a fire. The preserved items are now stored in pallets along with measurements and drawings, in the hope that one day she might be recreated. 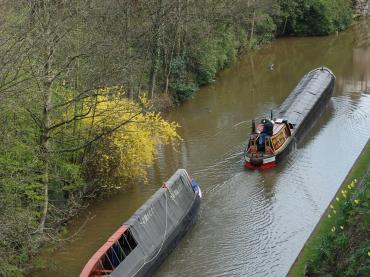