RENOWNED, Leigh Cockler, built by Seacraft & Co Ltd, Leigh on Sea in 1945. The vessel was built for a well-known Leigh cockling family, the Osbournes, and was paid for by the Admiralty to replace their vessel which had been sunk with all hands at Dunkirk (six Leigh cocklers ferried some 1000 troops off the beaches). Material was supplied from Chatham dockyard. LOA with bowsprit 13.75m, LOA 11.82, MB 3.93, DR 1.12m, tons 10.37. Hull is carvel built of mahogany planking on oak frames fastened with iron nails. Has pointed bow with plumb straight stem, and transom stern. Has 1 deck and two timber masts rigged as a ketch with gaff sails. Current engine is an inboard Ford/Parsons diesel, model 6D Barracuda, 6 cy, 120 hp, made in 1960s. Converted to a pleasure yacht in 1947. Sound and seaworthy with a new wheelhouse being fitted. 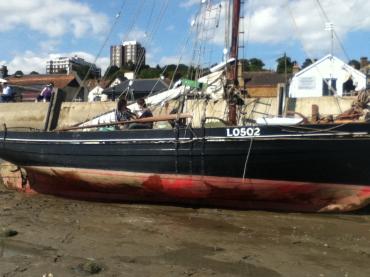