The NORE was commissioned from Camper & Nicholsons, Gosport, by the Port of London Authority (PLA) as a harbourmaster’s launch, which could also be used by the Royal Household. The PLA owned and operated her for more than twenty years. Launched in March 1951, the vessel completed sea trials to the satisfaction of Commander A. Coleman and Lloyd’s Register of Shipping. Of carvel and diagonal mahogany construction, the 14-ton NORE was powered by twin AEC diesel engines, giving a maximum speed of twenty knots. Classic Boat magazine described her as ‘the most desirable of river boats’. In 1953, the NORE was adapted for use during the coronation programme of HM Queen Elizabeth II and was designated the ‘Royal Barge’. The vessel transported the Queen and Prince Philip on June 12 1953 from a banquet at the Guildhall to the Royal Festival Pier. Subsequently, the NORE had an illustrious career, carrying members of the British and European Royal families, many heads of state including Commonwealth Prime Ministers, US President Truman, Khrushchev of USSR, General de Gaulle, Lord Mountbatten, Field Marshall Montgomery and leading figures from the world of arts and culture, such as Dame Margot Fonteyn, Sir Malcolm Sargent and Sir Francis Chichester. NORE led the river procession at the funeral of Sir Winston Churchill in 1965. The NORE was later renamed KING’S REACH and was decommissioned in the early 1970s. The vessel then passed into the hands of a scout troop from whom it was acquired by Middle Eastern owners. In the late 1980s, the NORE was discovered in an Essex boatyard by the current owner who purchased her, having estimated that restoration would cost £100,000. He moved the boat to Mitchell’s Boatyard, Poole and began stripping the brightwork, interior fittings and engines prior to a full refit. The engines were rebuilt and NORE was re-registered by her original name in London. The NORE Restoration Project Ltd has since been established and, once work is complete, the NORE will become a prominent feature of the River Thames again, crewed by Freemen of the River and Queen’s Watermen. As well as educational projects, the NORE will be available for private and corporate charter, providing clients with a unique opportunity to experience Britain’s ceremonial and maritime heritage. 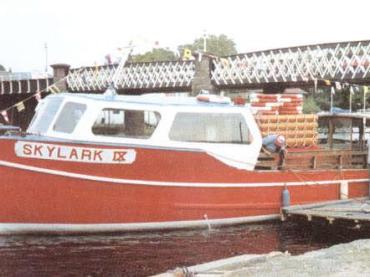