The Stem to Stern Heritage Training project is based in Woodbridge, Suffolk, using networks spreading to the South Coast and the West Country; it was formed to keep core boatbuilding skills alive – skills essential to maintain and restore historic and traditional vessels. At the heart of the scheme is the traditional model of an apprentice working for up to 4 years alongside experienced shipwrights whilst also being monitored and assessed against recognised NVQ standards to level 3. Alongside the NVQ the second aim is to inform children and young adults about their local sailing tradition and create an awareness of individual traditional sailing vessels and their origins.

Tim Smith was offered an apprenticeship after the team saw how dedicated and talented he was during his time as a volunteer on an introductory project. Tim had completed his latter part of NVQ level 2 City and Guilds 2451 Boat Construction, Maintenance and Support with Lowestoft College when he started the Project and had experience in Carpentry and joinery prior to the Boatbuilding Course.  The Project offered him the opportunity to gain experience and continue his training to NVQ level 3 Marine Engineering – Pathway T Wooden Yacht and Boatbuilding.

The Training Project began in May 2010, initially with funds for 6 months. After a brief period assessing Tim’s aptitude and ability, a training period of a maximum of 3 years was set, including a degree of flexibility and reviewed at intervals by shipwrights and the apprentice. Raising funds has continued throughout the project usually working 3 to 6 months ahead.

Pembeth of Clyde – registered historic vessel, fishing smack built by Aldous in 1906. Tim constructed a new hatch cover, made repairs to coach roof and deck, alerted the owner to significant leaks for which he made emergency repairs preventing the ingress of water below the waterline; he was part of a team of up to 8 people, under the supervision of shipwright Michael Emmett, working on the slip to overhaul and make repairs to the vessel to keep her in sailing condition (May 2011).

Mist – a classic canoe yacht built by Albert Strange in 1906.  Working with John Krejsa* on the complete rebuild

Kate/Sunbeam – registered historic vessel, a Scottish Zulu built by Hays of Lerwick in c 1906. Tim had the opportunity to see work below deck and examine the rebuild of the hull and deck structure using historic records, drawings and photographs.

Rock of Ages – registered historic vessel, a clinker double ender by Gostellow of Boston in 1916. Restoration continues with Michael Emmett and Bruce Chapple.

Black Rose – 50ft wooden ketch, based in Woodbridge, Suffolk and built in 1999. Spar repair and construction.

Sea Ranger 12 – A 12 foot clinker built, gunter-rigged, general purpose dinghy which is still in use by the Gunfleet Sailing Club in Brightlingsea. Helen Kemp is coordinator/Project Manager.

John Krejsa;* Melton, Woodbridge.  Previously of Whisstocks and Robertson’s at Woodbridge, who has experience of mentoring apprentices. 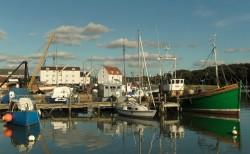