I applied for the SHTP2 traineeship because, it sounded like my dream opportunity. To learn more about these amazing ships that I want to sail on, and to have the ability to fix stuff onboard without ending up a swearing and/or crying heap in a corner because I didn’t know how to. And the opportunity to spend a full season on board Excelsior is genuinely a dream come true for me!

Sail training played a huge part in shaping me; the amazing people I’ve met and guidance from the wonderful crew members on Royalist helped shape me into the person I am today, helped me through some really tough times during my teenage years, and without these experiences and encounters I wouldn’t be on the path I’m on today. My dream is to work within sail training, to help have a positive influence on other crew members and trainees, and to share the passion I have for working on board these fantastic ships with other people.

We all joined the traineeship in Falmouth in October, which already feels like a lifetime ago mostly due to how much awesome stuff we’ve done since then! The induction was about three weeks, and over those three weeks we travelled from Falmouth to Millbrook and to Brixham. We did courses that would help to make us more qualified to work on board our placement ships, like first aid and sea survival, we visited quite a few shipyards and were able to appreciate the vast differences between massive industrial shipyards like Pendennis in Falmouth compared to Luke Powell’s yard which was definitely more a homey feeling!

We spent the best part of a week on the Tamar river on the Lynher Barge, and lived on board the ship Provident in Brixham, where we did more courses and visited museums. Myself, Sean and Hannah went to the ship Leader to help the crew de-rig for winter on days that the other guys did the powerboat course as we already held this qualification, and we were lucky enough to get to sail the smallest of the Trinity ships, Golden Vanity from Brixham round to Dartmouth.

The Lynher Barge was definitely a massive highlight for me. Living on this barge that was in the middle of being restored was a really cool experience, and there’s something about living in hammocks, with no electricity or plumbing that’s a really cool experience too! Speaking to Dom and Barbra and hearing the passion they had for restoring the barge was really inspirational. During our time on the barge we were given the chance to practise sailing in their little wayfarer dinghy, do a bit of rowing, and have a whizz around in the rib too! Dom did some seamanship with us, knot tying, eye splicing, and whippings. We had the absolute joy of emptying the composting toilet twice a day,which made me appreciate working plumbing in a way I never thought I would! And the pinnacle of the Lynher was the best cheese and onion pasty I have ever had (I still think about it sometimes and literally drool).

Helping with the de-rig on board Leader was also one of my favourite bits of the induction. I’ve never had the chance to help take down a topmast, and it was amazingto see it happen and help. Sailing Golden Vanity to Dartmouth was also awesome; the only thing wrong with the trip was that the mugs had already been taken off the ship for winter so there were three of us drinking tea from one Chinese container. But it was still great! In Brixham we also met a local fisherman and artist, Toni Knights, who entertained us with countless stories and even took us for a wee trip onboard his lugger, Iris. (It ended up being more of a drift due to lack of wind but it was still really cool, and my first ever experience on board a lugger!)

One of the last things we did in Brixham was to meet all the partners of the project for dinner. It was lovely meeting everybody in a casual setting, and I think it helped to take a lot of pressure off everybody. We spent our last morning in Brixham with the partners who told us a bit more about their individual organisations, which was a nice end to our induction, and got us all pumped to join placements and have the opportunity to swap about for a couple of weeks. We then had a week-long break before travelling to Lowestoft to begin our training at the International Boatbuilding Training College.

The first few days were relaxed. Our instructor, Mike, showed us around, introduced us to most people in the college and started us off learning some timber technology and boatbuilding terminology. We also got to take a trip to see my placement vessel, Excelsior! After seeing her for the first time, I couldn’t wait to join for the season, to learn more from John Wylson (who I think knows everything and anything about traditional sailing), and the other crew on board.

After a few classroom days we were able to move to the workshop and start the first part of our practical course, joinery. During the three weeks we spent on joinery, we learned how to use tools, planes, chisels, saws etc. We made bench hooks, mallets, tackled different types of joins in wood, and lots of useful little skills and tricks that will hopefully come in handy during our placements.

One of my favourite parts of the first section at the International Boatbuilding Training College (IBTC) was the few days we spent learning some seamanship skills, knots and splicing. This was particularly interesting for me as I love working with ropes; doing whippings, splicing etc. is something I find really fun, and I love learning more about rope and rigging.

Another one of my favourite bits was caulking. This is something I had only really learnt about a few months ago, after seeing a little bit done onboard Atyla, and I had been desperate to have a bash at it! Our instructor, Maynard, taught us to prepare both cotton and oakum to hammer into the seams of a deck or hull, and we got to have a go atusing mastic (which involves taping along the seams and getting a nice, straight line in the deck) and also pitch, which is messy but soooo much fun to do!

We finished IBTC just before Christmas. It was sad saying ‘bye to the museum guys as they headed to placement after Christmas, but I’m sure we’ll see them again soon! 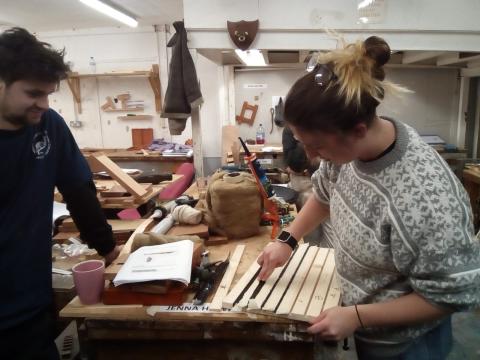