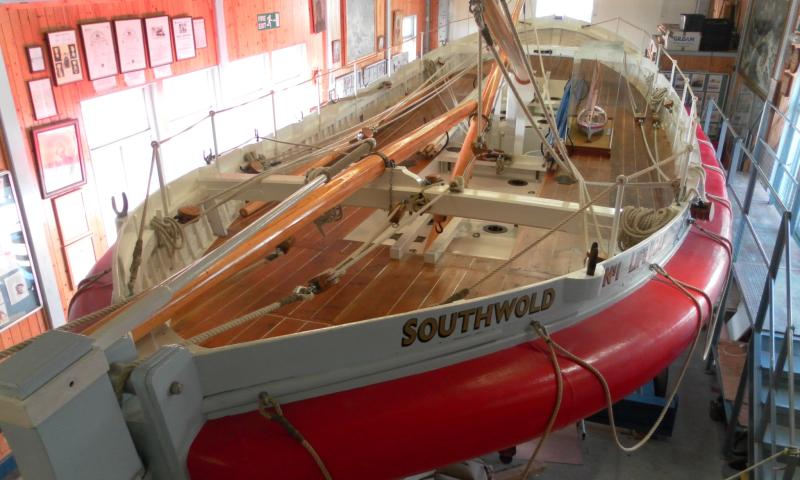 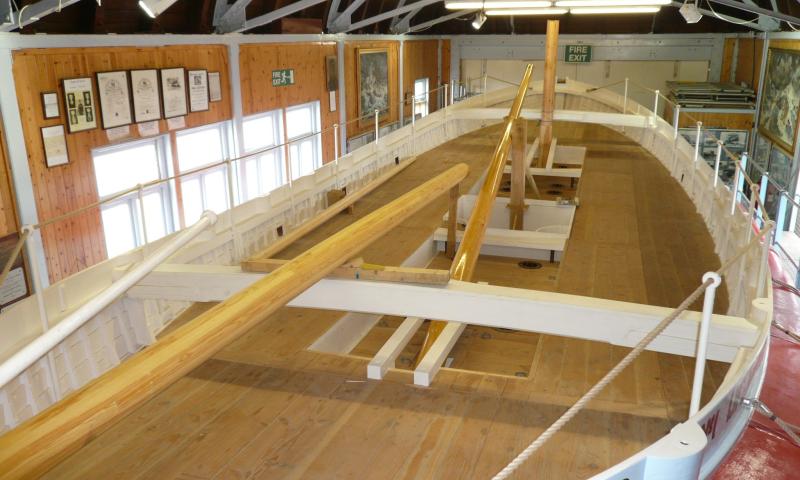 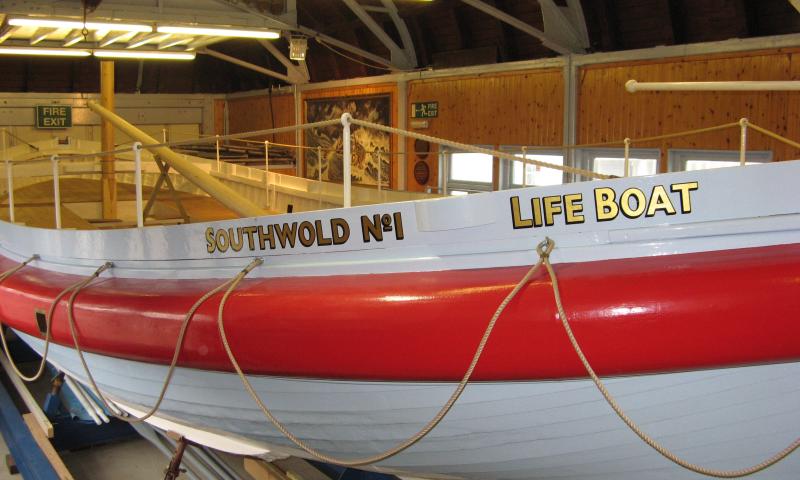 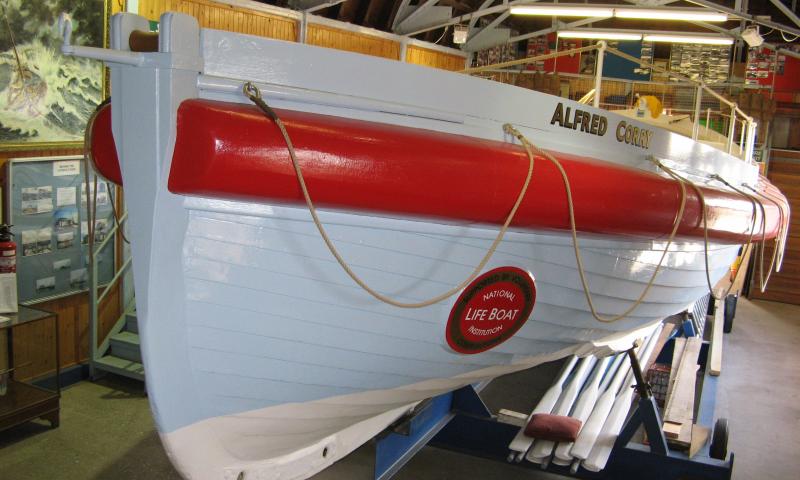 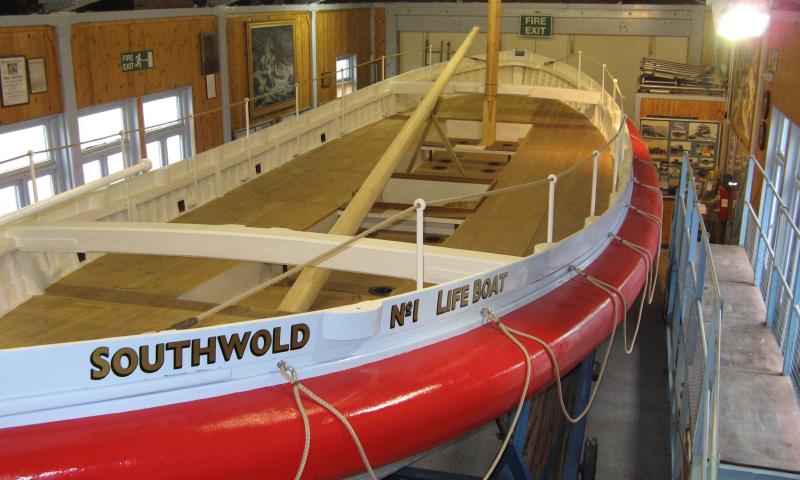 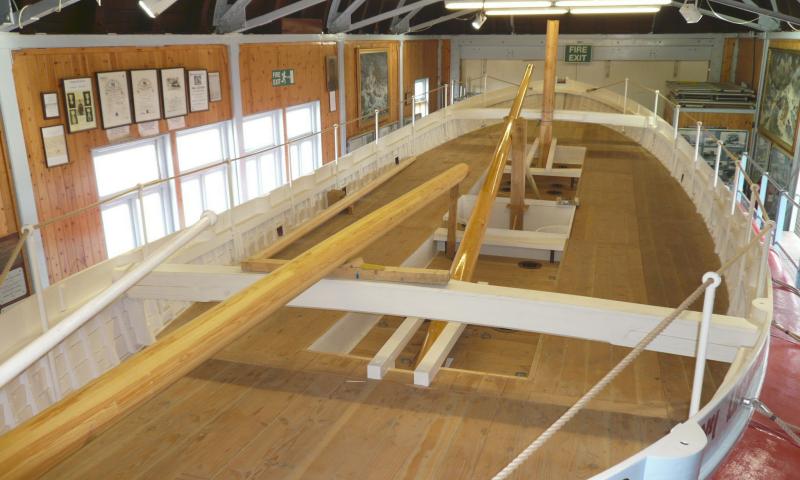 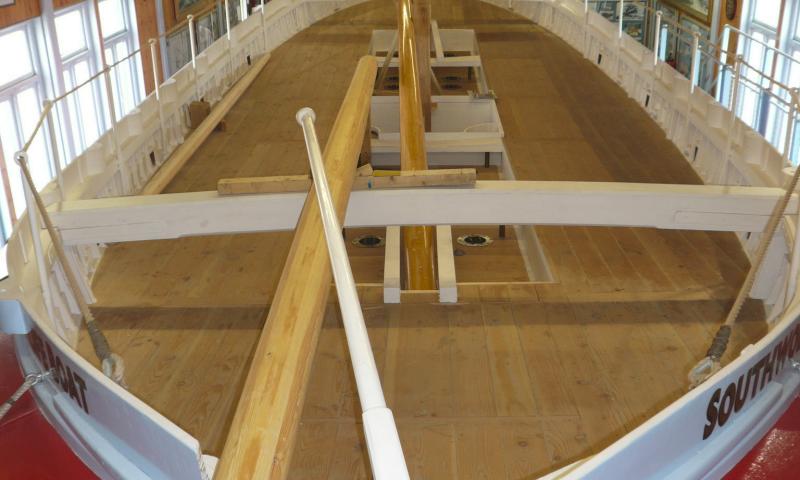 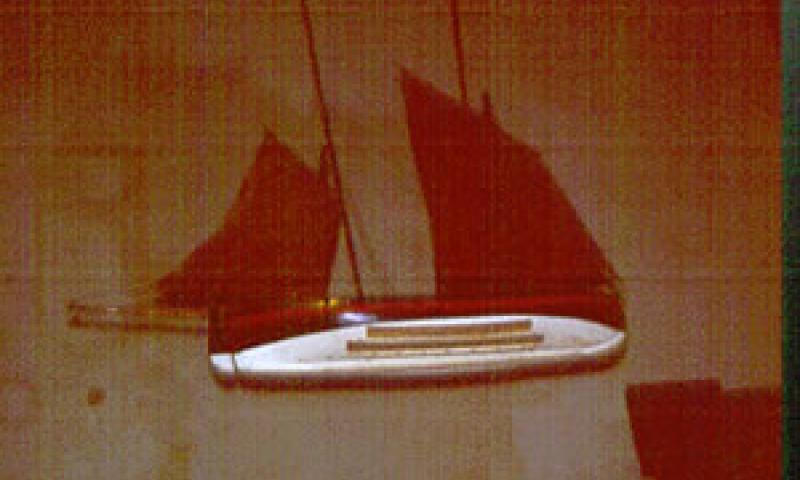 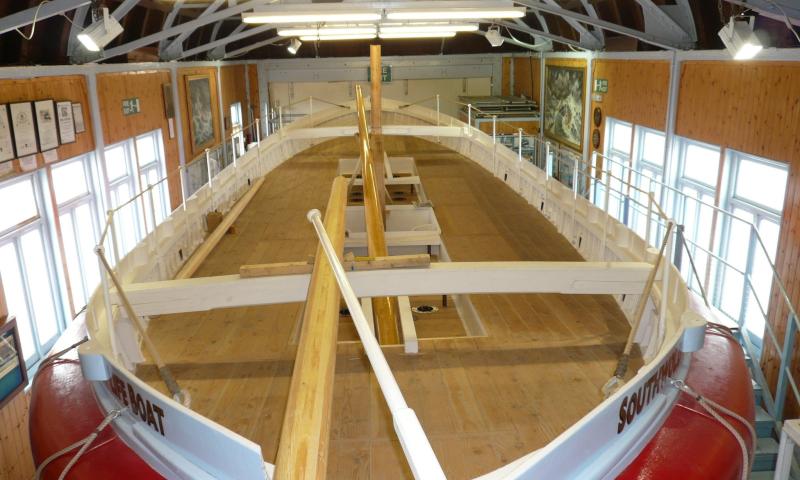 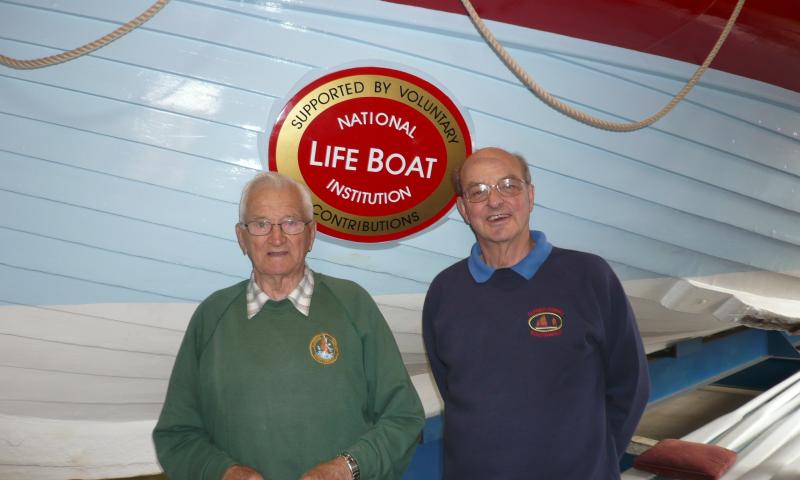 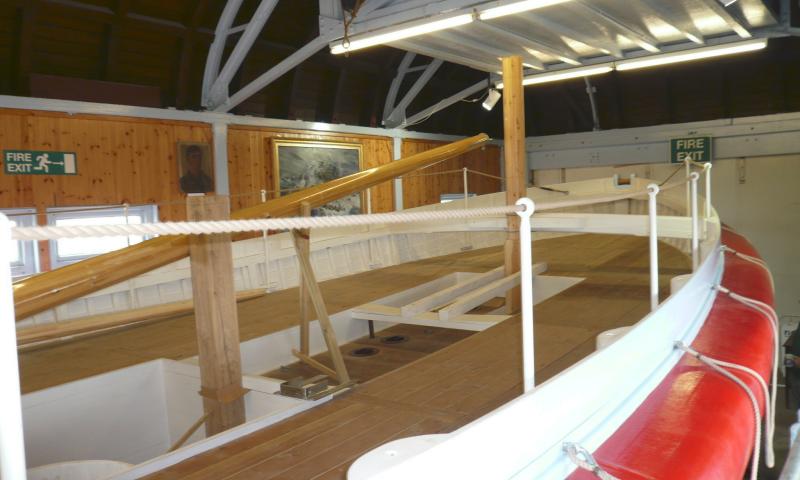 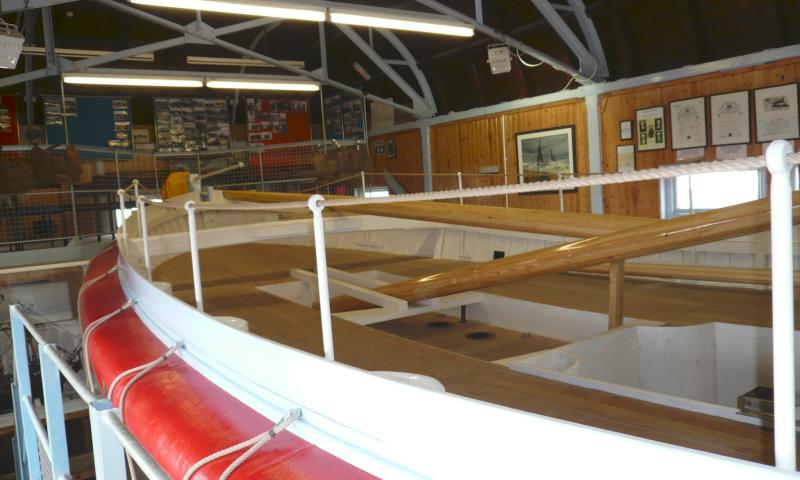 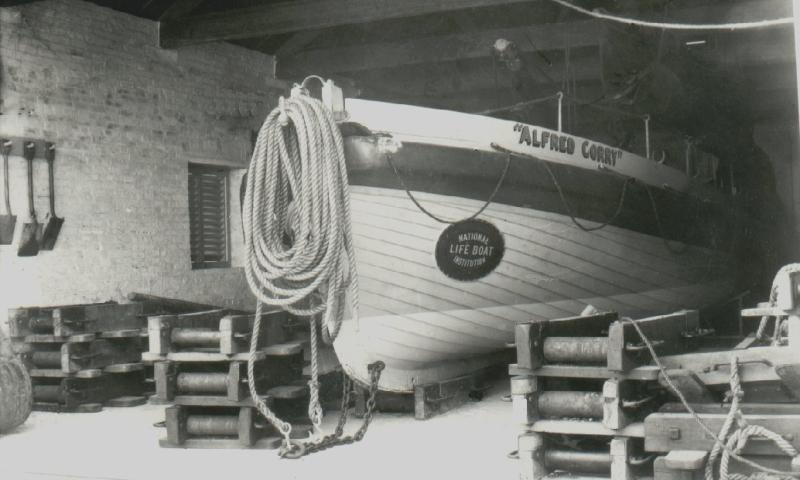 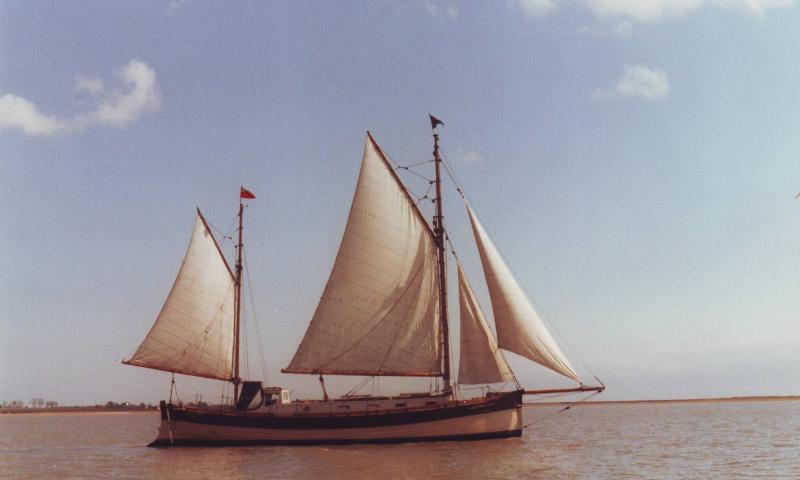 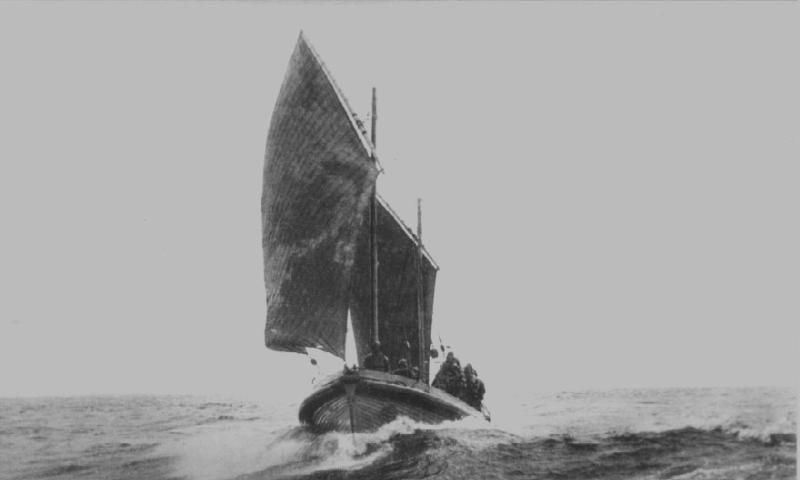 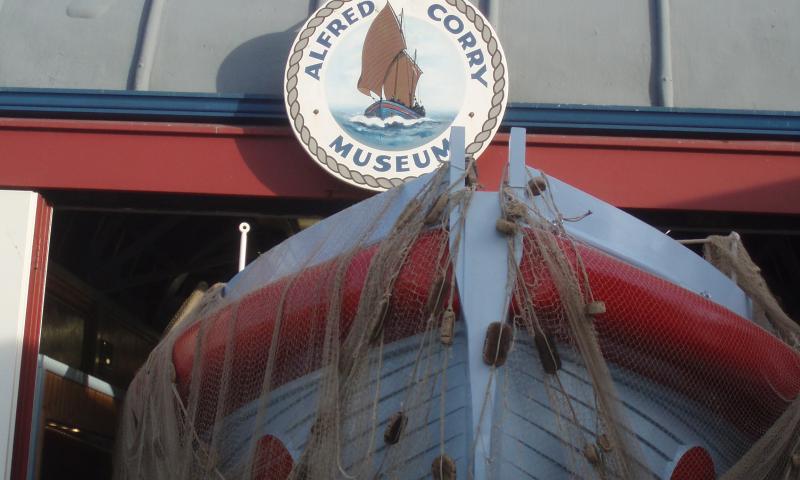 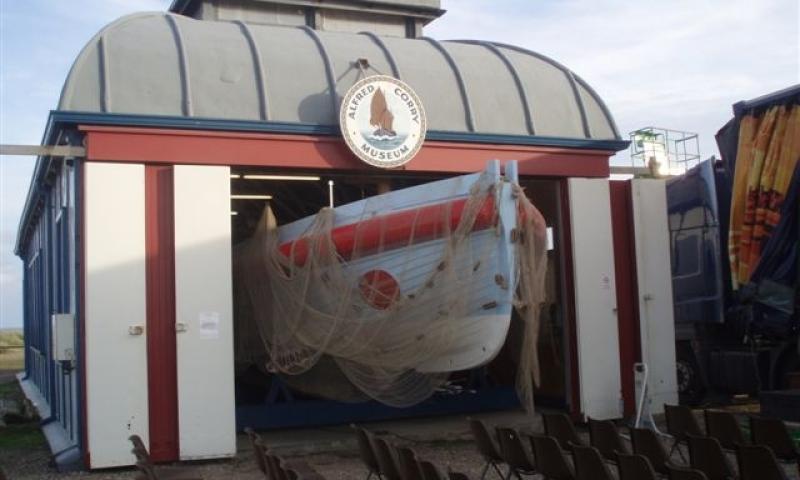 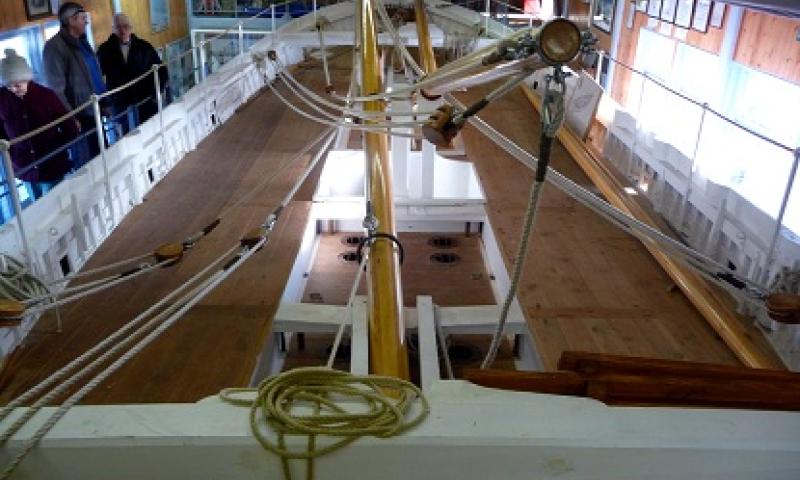 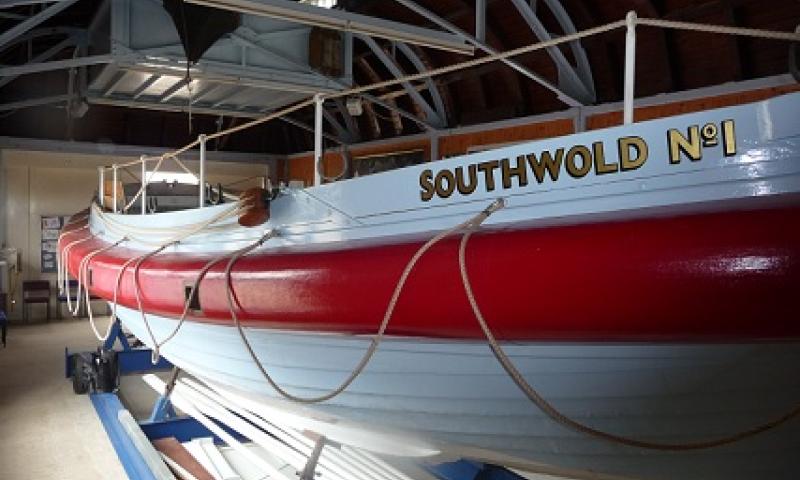 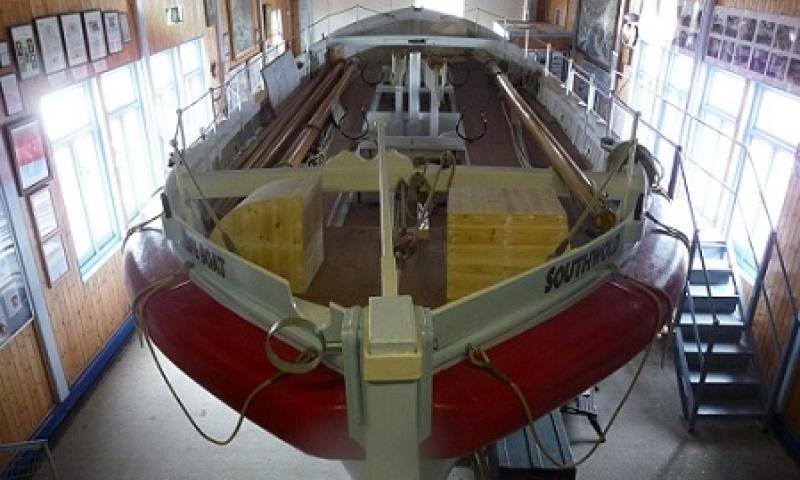 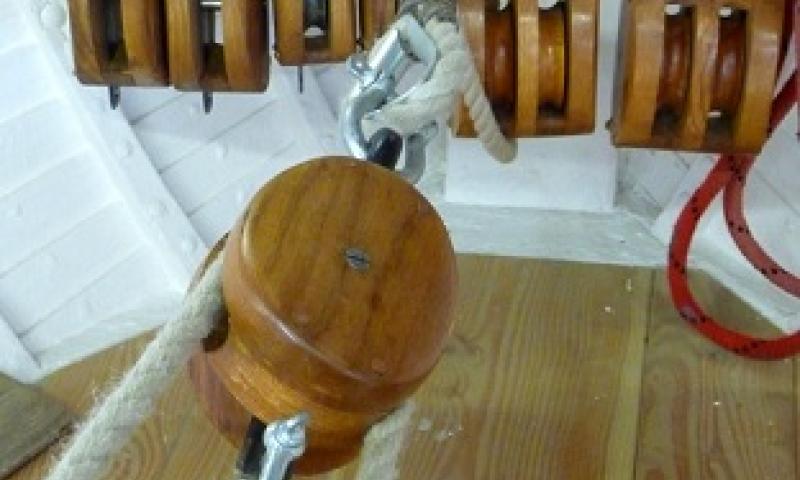 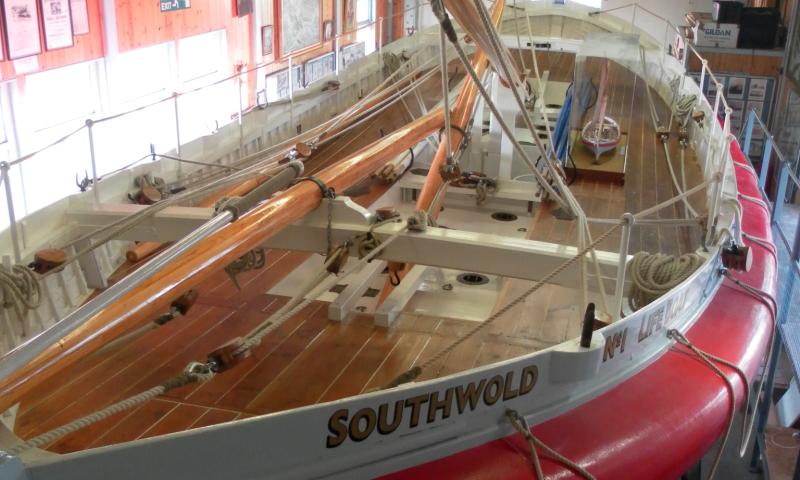 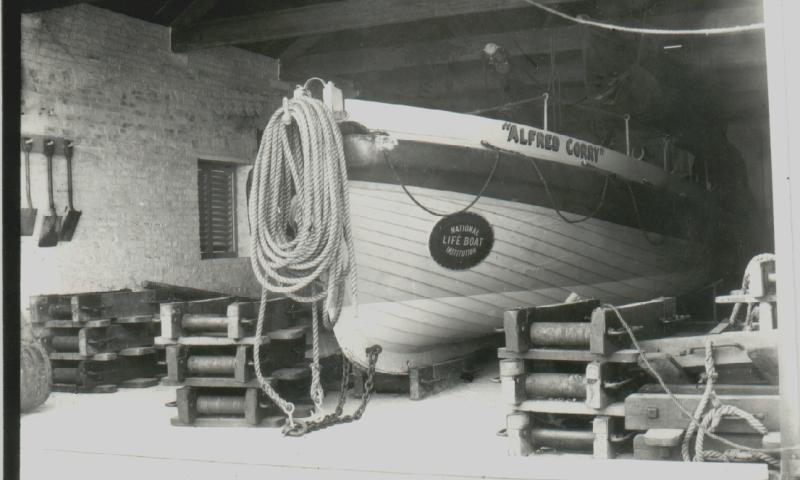 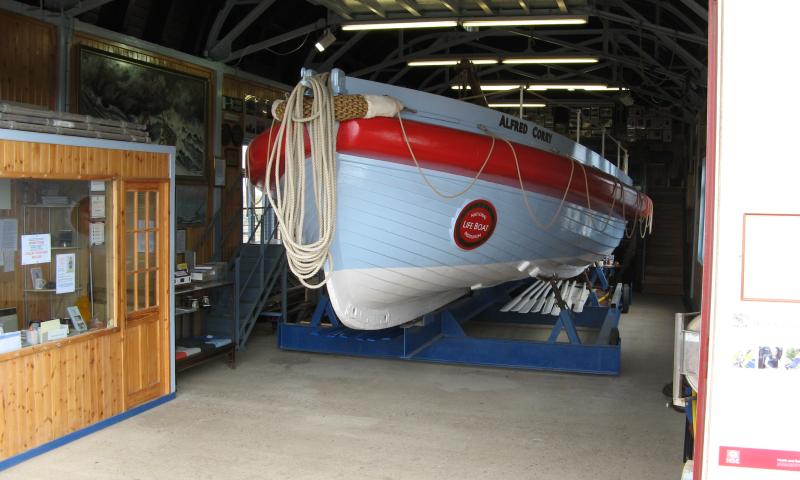 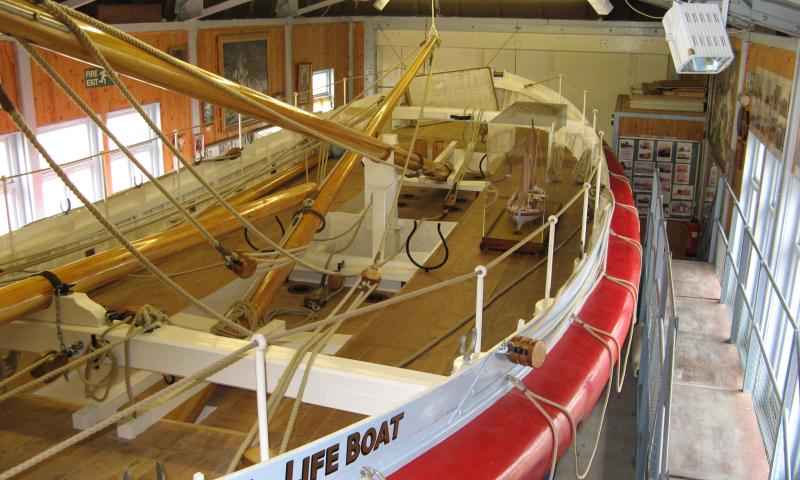 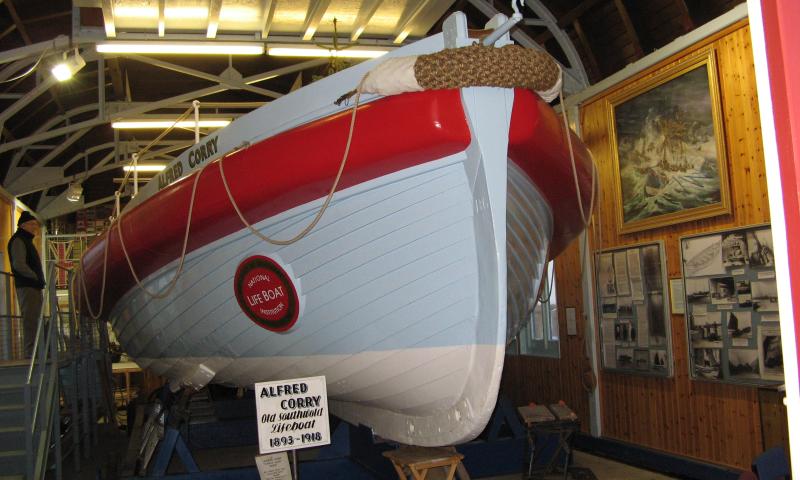 ALFRED CORRY was built as an improved version of the non-self-righting, pulling and sailing Norfolk and Suffolk Class lifeboat, and she has been conserved in this form today. She carries two masts, a dipping lug on the foremast, and a standing lug on the mizzen mast. She holds about 5 tons of water ballast in four tanks, and the total weight of the boat without gear is over eight tons. She was built with places for sixteen oars, although this was later reduced to fourteen oars. She has eighteen relieving tubes and eight scuppers.

ALFRED CORRY has a long association with the town of Southwold where she served as the No.1 lifeboat for 25 years, between 1893 and 1918.  This connection, along with the heroic service of her coxswains, imbues ALFRED CORRY with considerable regional significance. John Cragie, who was responsible for ALFRED CORRY’s design specification, was one of the best known Coxswains from Southwold. He received three RNLI silver medals, the third of which was granted on his retirement as coxswain of ALFRED CORRY in 1898. He was succeeded by Sam May, who remained as coxswain for twenty years. ALFRED CORRY was launched on service 41 times, and is credited with saving 47 lives.  During the First World War she was launched 14 times, under sail, saving a total of 15 lives. Her first service resulting from enemy action occurred in mid-1915, and her last service of the war was in February 1918, when she went to the assistance of a Government Seaplane which had ditched one mile south of Southwold.  After being sold out of service to Lord Albemarle in 1919, ALFRED CORRY was converted to a gentleman’s yacht. In this form, she had the distinction of being the first British yacht to enter Ostend after the end of the Second World War. In 1976, her original use became significant again, when she was bought by John Cragie, great grandson of the first coxswain, and an extensive conservation programme was undertaken.

ALFRED CORRY was designed with a full bow, to provide lift when launched from an open beach, and a hull shape which would make her fast, safe and comparatively dry at sea when sailing off the wind, which was the type of sailing she would usually be called upon to do in service. She is an excellent example of how a lifeboat was built for a particular use and the conditions she would have had to face on the Norfolk and Suffolk coast. She is now housed in a stable and appropriate heritage environment on public display ashore in the Alfred Corry Museum which is located in the former Cromer lifeboat station at Southwold.

The ALFRED CORRY was built in 1893 by Beeching Brothers of Yarmouth is a 44ft 1in Norfolk & Suffolk sailing and pulling Lifeboat. She is the first of the improved clinker built type. Stationed at Southwold from 1893 to 1918, the ALFRED CORRY had a maximum crew of 18 and was launched from the beach until 1908 when coastal erosion changed the nature of the foreshore. She was then moved to a slipway built in the harbour on the nearby river Blythe estuary.

She was on service 41 times and saved 47 lives under her three Coxswains; John Cragie, Sam May and Charles Jarvis. Coxswain John Cragie received three silver medals for gallantry from the RNLI, the first in 1859, the citation for his second, awarded on 11 July 1895 states:

In recognition of his long and gallant services during the period, about 48 years, in which he has been connected with the boats, firstly as one of the crew, afterwards as Second Coxswain and ultimately as Coxswain, a post John Cragie assumed in 1879. During this period, there were services to the barque NORDENHAVET (1887), the brigantine VECTA (1890), the fishing boat MARY ANN (1892) the barque ALPHA (1893), the barque NINA (1894) and the brig JAMES AND ELEANOR (1895).

On 10 March 1898 he was awarded his third silver medal, which was awarded on Mr Cragie's retirement from the post of Coxswain after many years in the boat. Only one service was rendered after his previous medal, that of assisting the ketch ELIZA AND ALICE (1896).

Under Coxswain Sam May the ALFRED CORRY continued her service and further enhanced the reputation of both boat and crew. In 1905 Sam May and the lifeboat crew were awarded medals by the French government for their “Courage et Devouement” in the rescue of the crew of the JOSEPH ET YVONNE. In 1911 Sam May was awarded a RNLI certificate of service and a pair of binoculars for his part in the locally famous Christmas time rescue of the BERYL. In 1912 Sam May and his crew were awarded Dutch medals for their part in the gallant rescue of the schooner VOORAARTS.

Of course, throughout the First World War the ALFRED CORRY remained available to aid both civilian and military vessels and mariners. During the course of the war she was launched 14 times. She and her crew are credited with saving 15 lives.

Her first war time service was to aid a local fishing boat, the ORIENT, which was in difficulties off Southwold Harbour. Her first service resulting from enemy action was on 18 July 1915 when she went to the aid of a large steamer, the SS BATOUM, which was reported as having been torpedoed. The BATOUM was loaded with fuel oil and 6 of her 33 crew were killed by the explosion.

On 11 October 1915 she went to the assistance of Government Patrol Boat, the AMY, again on Sizewell Bank. At the time the AMY, which was originally a trawler, was serving as a Minesweeper. Her most significant life saving launch occurred on 12 November 1915 when she went to aid of a Brigantine, the JOHN which had run aground near Sizewell Bank during an easterly gale. Her last wartime service was on 27 February 1918 when went to assist a military Seaplane which had ditched off Southwold.

In October 1918, after much hard work during World War I the ALFRED CORRY was in need of considerable repair and was sold out of service. She was converted to a ketch rigged yacht at Lowestoft and renamed ALBA by her new owner; Lord Albemarle. She was fitted with an engine and was owned and registered in Cowes.

In 1939, she was laid up in a mud berth at West Mersea, Essex where she remained for the duration of World War II. A change of ownership and refitting saw her as a well found yacht again and she is reputed to have been the first British yacht to enter Ostend after the war.

In 1949, she was renamed THORFINN and, by 1976, she was derelict as a houseboat in Maldon where she was found and bought by Captain John Cragie, the great grandson of the first Coxswain. Restored by Ian Brown of Rowhedge, Essex, she re-emerged as a fully seaworthy yacht. With permission from the RNLI her name was changed back to the original; ALFRED CORRY.

In 1991, after several more years of cruising, a charitable trust was set up to restore her to her original form as a lifeboat and return her to Southwold. This work was firstly undertaken by the Boatbuilding Training Centre at Lowestoft and completed by a dedicated volunteer team in Southwold. A permanent home in Southwold was provided by the former Cromer lifeboat shed which was towed to its new position in 1998. This 1920s wooden shed with distinctive curved zinc roof was the first of its type to be built by the RNLI and has a history of its own, second to none in the United Kingdom. Source: Alfred Corry Lifeboat Museum Trust records.