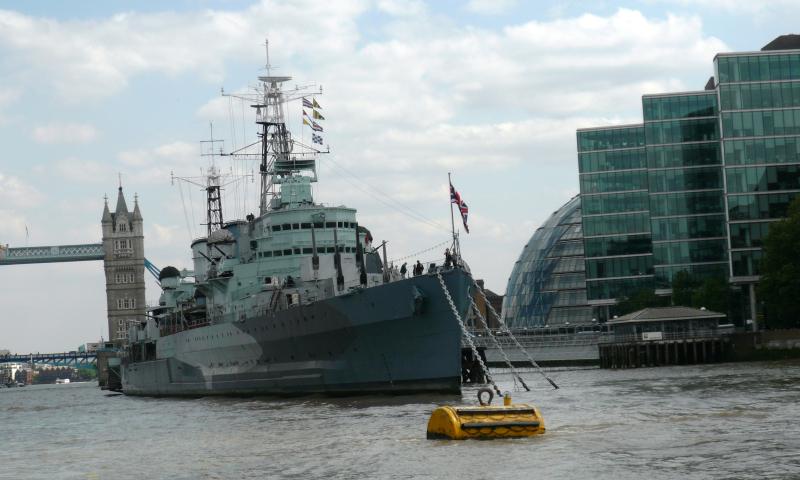 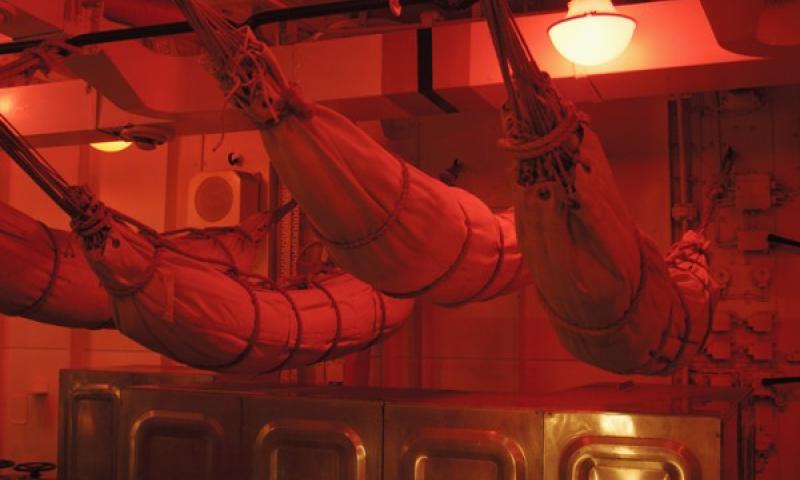 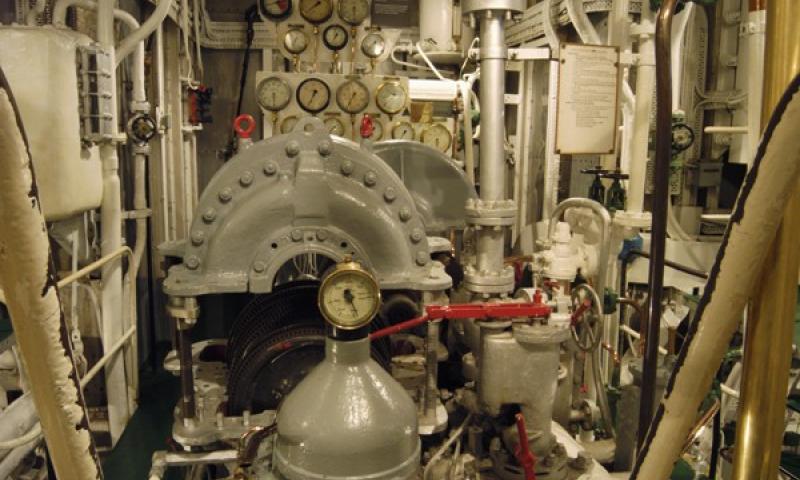 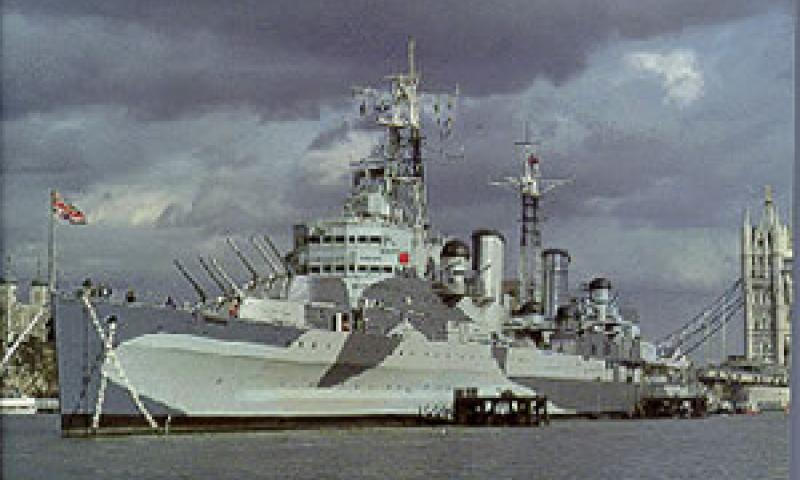 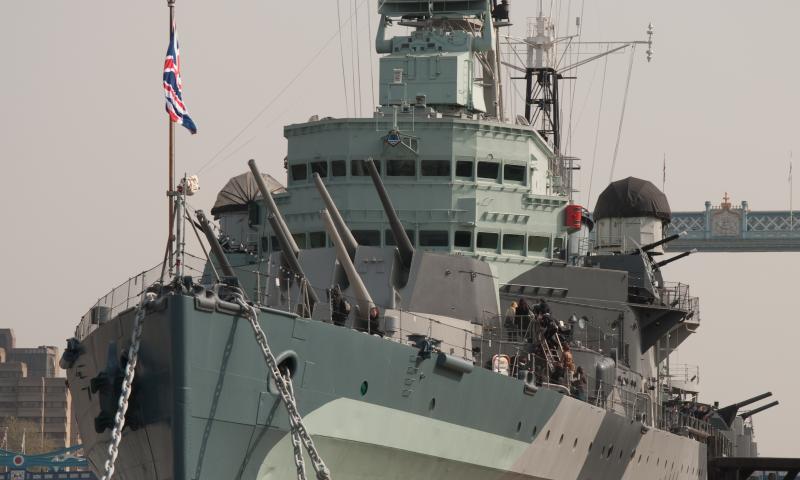 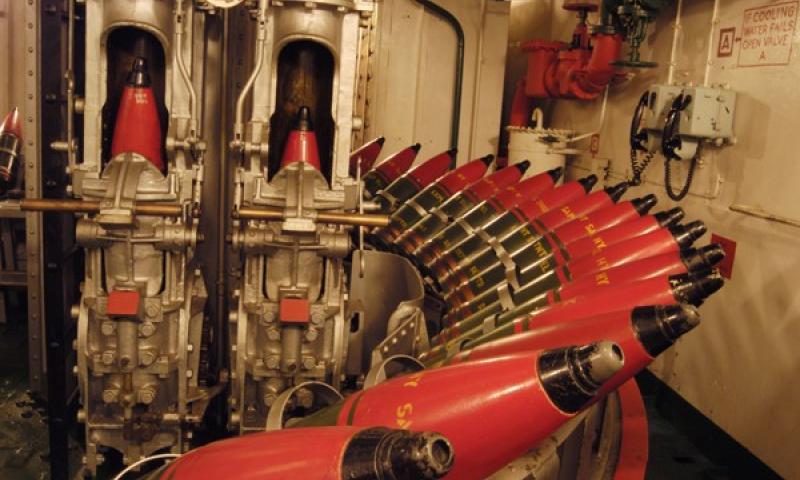 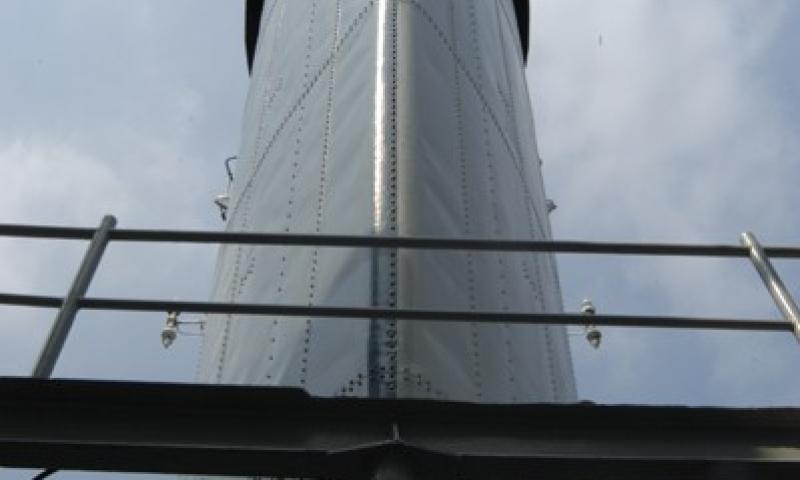 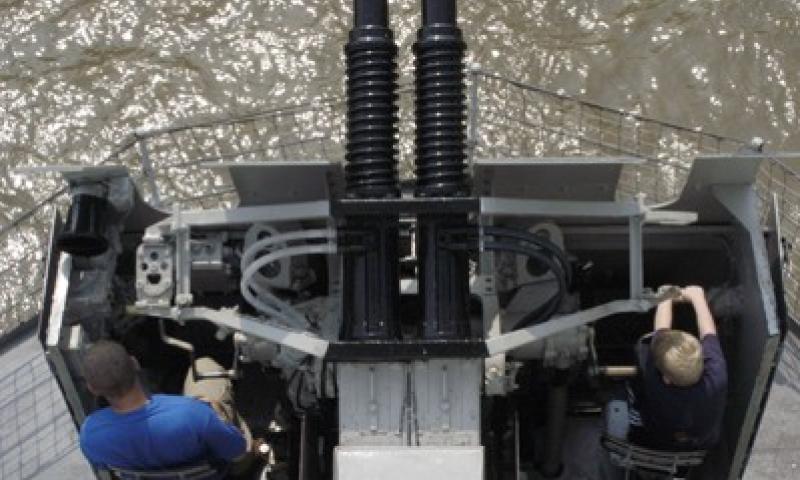 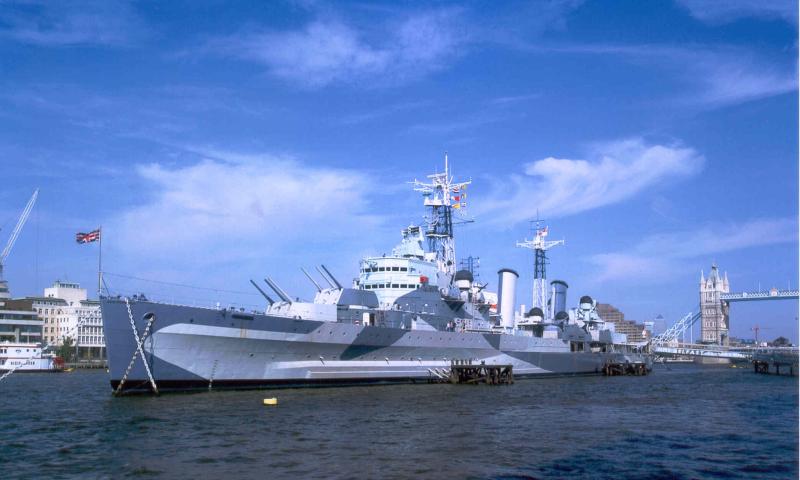 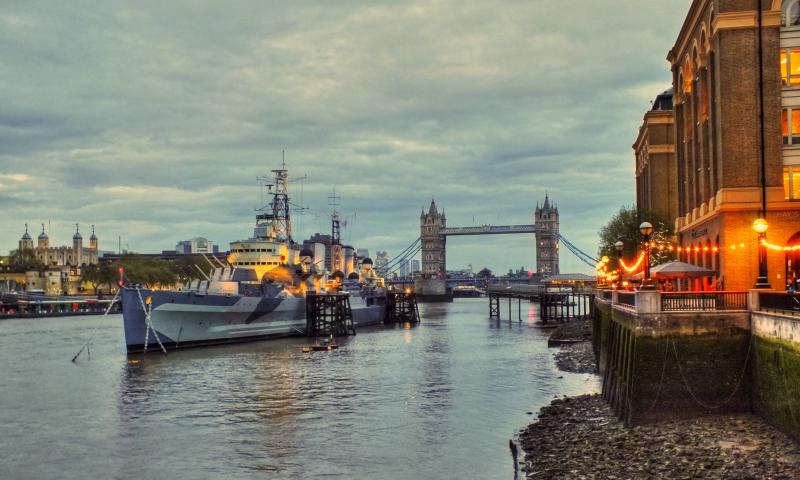 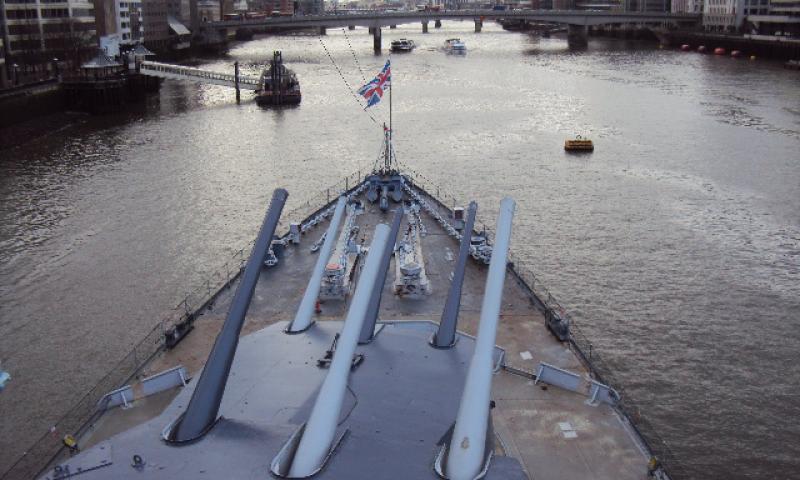 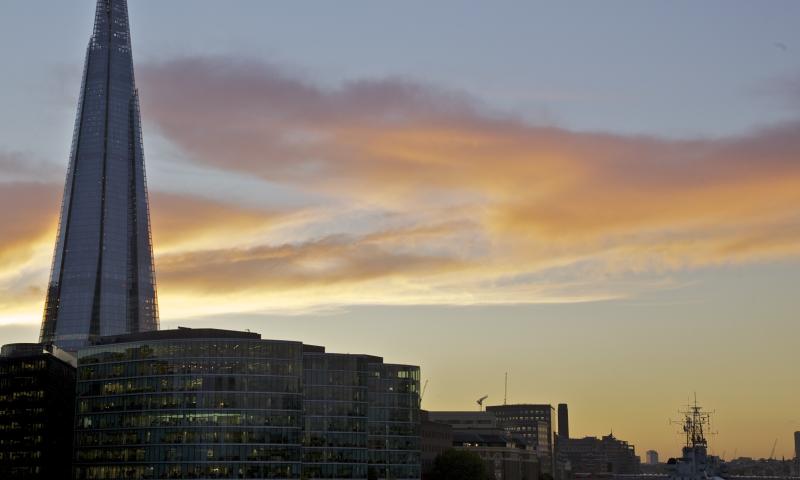 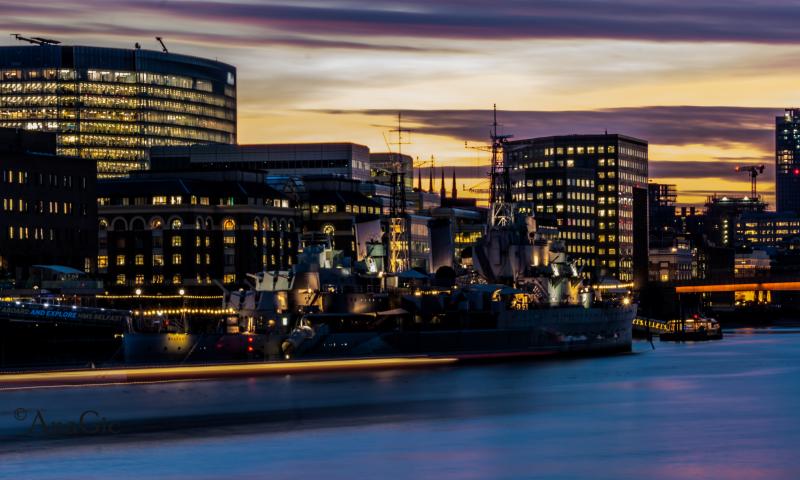 HMS BELFAST is a 6-inch cruiser, designed for the protection of trade, for offensive action, and as a powerful support for amphibious operations. Her keel was laid on 10 December 1936, when she became 'Job Number 1000' in Harland & Wolff's shipyard in Belfast. The navy estimates for 1938 show that her planned cost was £2,141,514, including £75,000 for the guns and £66,500 for aircraft. She was commissioned on 5 August 1939 under the command of Captain G A Scott DSO RN. At the outbreak of war with Germany in 1939, BELFAST formed part of the 18th Cruiser Squadron based in Scapa Flow in the Orkneys, and the ship was at sea at her war station in the North Atlantic from the very beginning.

As part of her blockade duties on 9 October 1939 she intercepted the Norwegian-owned cargo vessel SS TAI YIN, which was sent to Kirkwall with an armed guard onboard, and later the same day boarded and captured a German liner, SS CAP NORTE, which was disguised as a Swedish liner, the SS ANACONA. The Germans had a swift revenge for BELFAST's early success in capturing the CAP NORTE when, just before 11.00am on 2l November l939 leaving the Firth of Forth, she was blown up by a magnetic mine; the damage was so serious that she lay in Devonport Dockyard for 28 months while repairs were made. She recommissioned at Devonport on 3 November 1942 under the command of Captain Frederick Parham and rejoined the Home Fleet as the flagship of the 10th Cruiser Squadron, wearing the flag of Rear Admiral R L Burnett. Her next task was to provide cover for ships of Convoy JW53 which sailed with supplies for Russia on 15 February 1943.

This convoy encountered hurricane force gales which scattered the ships and caused severe damage to navy warships and merchant vessels. Most of 1943 was spent in the cold Arctic waters where BELFAST was employed on patrol, convoy duties and offensive sweeps without loss thanks to aggressive tactics by BELFAST and other Allied escorts. However, the Admiralty knew that the German battlecruiser SCHARNHORST was at Altenfiord in Norway and that it was only a matter of time before she left harbour to attack a convoy. Convoy JW55B, comprising 19 ships, left Loch Ewe in Scotland for Russia on 20 December 1943. Convoy RA55A consisting of unladen merchant ships left Murmansk on 23 December to return to the United Kingdom. The Admiralty in London took all possible measures to defend the convoys against attack by German ships, and Vice-Admiral Robert Burnett in BELFAST, which together with NORFOLK and SHEFFIELD formed Force I, was ready for action from the start. Distant cover was provided by Force 2 under Admiral Bruce Fraser with the battleship DUKE OF YORK, the cruiser JAMAICA and a squadron of destroyers, including the Norwegian STORD.The SCHARNHORST, flying the flag of Rear Admiral Eric Bey, and five large 'Z' class destroyers left Altenfiord on Christmas Day 1943 to attack and destroy the merchant ships in the convoy. The SCHARNHORST attacked the cruisers early on 26 December but was driven off after sustaining damage from NORFOLK. The five German destroyers lost touch with the SCHARNHORST and played no effective part in the ensuing action. The SCHARNHORST returned for a second attack at 12.20pm but was again driven off by the cruisers, and Rear Admiral Bey decided to return to the safety of Altenfiord. As the SCHARNHORST retreated at high speed, the cruisers of Force I and the ships of Force 2 gave chase and a salvo from the DUKE OF YORK hit the SCHARNHORST, reducing her speed. The Allied ships closed in and, as the destruction of the SCHARNHORST appeared inevitable, Admiral Bey sent a final signal to Berlin 'We shall fight to the last shell’. The SCHARNHORST fought bravely but was overwhelmed by the Allied ships and after a fierce action she rolled over and sank. Only thirty-six of her complement of 1,968 men were saved. With the sinking of the SCHARNHORST, and the immobilisation of the German battleship TIRPITZ in a daring attack by British midget submarines, the situation in the Northern Atlantic had been transformed, for the main German surface threat was now eliminated. However, in March intelligence reported that the TIRPITZ had repaired the damage caused by the midget submarines and was preparing for sea again. Admiral Fraser planned for two strike forces to carry out an air attack on the TIRPITZ, with two fleet carriers, VICTORIOUS and FURIOUS, each carrying a strike wing of twenty-one Barracuda bombers.

BELFAST formed part of the escort of this powerful strike force (code-named Operation 'Tungsten'), which carried out a successful raid, hitting the TIRPITZ with fourteen bombs - putting her out of action until she was finally sunk by bombers of the RAF. The plan for the invasion of Europe (code named Operation 'Overlord') provided for an attack on a fifty mile stretch of Normandy coast by a force of five divisions, with additional landings at Cherbourg. The naval part of the invasion plan, Operation 'Neptune', aimed 'to secure lodgement on the continent from which further offensive operations can e developed' and the naval forces were allocated for escort duties, mine-sweeping, gunfire support the army, and the defence of the hundreds of vessels carrying food, water, stores, ammunition and reinforcement troops. The actual assault was to be carried out by two large amphibious forces called Eastern and Western Naval Task Forces.

BELFAST was part of the Eastern force, which was mainly British, and was commanded by Rear Admiral Sir Philip Vian who had the task of landing three divisions of the British Second Army in three sectors called Sword, Juno and Gold. The warships allocated to Operation Neptune totalled 1,213 vessels, ranging from large battleships and monitors to midget submarines. HMS BELFAST formed part of the massive bombardment force which gathered in Belfast Lough and was matched by ships assembled in the Clyde. At 5.30am on 6 June 1944 BELFAST commanded by Captain RF R Parham DSO RN, fired the first shells of the invasion at the German battery of Ver sur Mere. At 7.30am the assault forces, launched form further out to sea, passed HMS BELFAST and stormed the beaches. The Seventh Battalion of the Green Howards overran the 10-cm battery, where the German gunners were hiding in their bunkers, their guns having been destroyed by BELFAST's shells. She remained in the Channel area until 10 July, carrying out bombardment of enemy targets ashore and helping to protect the other ships in the Task Force against surface attack. Her 6 inch guns had fired in anger for the last time during the war in Europe. She now prepared to sail to the Far East, ready to help in the fight against Japan. The atomic bombs had exploded over Hiroshima and Nagasaki and the Japanese had surrendered before BELFAST arrived at Sydney but there was much work to be done rescuing the emaciated survivors of the Japanese prison camps. BELFAST was engaged in ferrying the sick and dying between Shanghai and Hong Kong. These missions were completed by January 1946 but BELFAST remained in the Far East performing a peace keeping role during a period of general unrest in South East Asia and the East Indies.

She eventually returned to Portsmouth on 15 October 1947, where she paid off into reserve. BELFAST remained at Portsmouth for a year, during which time she was armed with four more Bofors guns. She recommissioned on 22 September 1948 under Captain E K Le Mesurier and visited the city where she had been built to receive a gift from the people of Belfast the magnificent silver bell which now hangs proudly on her quarterdeck. On 23 October 1948 she sailed again for the Far East, reaching Hong Kong at the end of December to become the flagship of the 5th Cruiser Squadron commanded by Rear Admiral A C C Madden. The Communist insurgency in Malaya had already begun and Mao Tse Tung's forces were poised to overthrow the Nationalist regime in China.

For the next 18 months, as tension mounted, BELFAST helped safe guard British interests in this troubled area of the world. The Korean War started when the Communist forces of North Korea crossed the 38th Parallel on 25 June 1950 to invade South Korea. Great Britain, America and other United Nations forces were quickly involved and BELFAST led British and Commonwealth ships into action on 6 July 1950, bombarding shore targets to support the hard pressed troops on land. In October 1950 BELFAST was ordered to return home to recommission. The ship stayed in Chatham for 17 days and sailed again for the Far East with a full war complement embarked. On arrival off Korea in February 1951 the bitter fighting was still in progress, with the Chinese forces being driven back slowly to the 38th Parallel.

As the opposing armies fought up and down the Korean peninsula so United Nations ships moved with them, bombarding, blockading, mine-sweeping and evacuating. BELFAST's operations off Korea continued throughout 1951 and 1952 and, after three years in reserve, was modernised in Devonport for the second time in her life. She recommissioned on 12 May 1959 ready to meet the challenges of the modern Navy. She sailed for the Far East and spent the years 1959-1962 performing the usual duties of HM ships abroad in peacetime carrying out exercises and generally 'showing the flag'. One notable event occurred in December 1961 when HMS BELFAST entered Dar-es-Salaam to take part in the granting of independence to Tanganyika. She had the honour of providing the guard for the final hauling down of the Union Flag and the first hoisting of the Tanganyikan flag.

Thousands thronged the foreshore as she steamed out of Dar-es-Salaam harbour. BELFAST returned to the UK and made a final visit to the City of Belfast. Following one last exercise in the Mediterranean she finally paid off in Devonport on 24 August 1963 and her Admiral's flag was hauled down for the last time, having steamed nearly half a million miles during her operational life. In the normal course of events, her next destination would very probably have been the scrapyard. However, behind the scenes, a determined group of men led by her former captain, now Rear Admiral, Sir Morgan Morgan-Giles DSO OBE CM, decided to save her and she was brought to London and opened to the public on 21 October 1971.