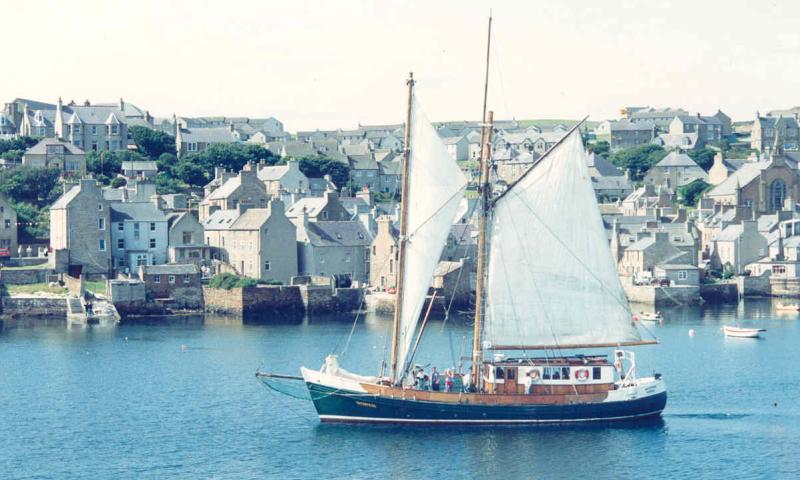 ENTERPRISE was built by David Howarth. Her official number was 710151 and her fishing numbers were K880 in 1960 and LK447 in 1947. Her hull is carvel built of oak frames with larch planking and she has a Douglas fir deck with coach bolt butts and galvanised steel nails. She has a cruiser stern, a raked curved stem, one deck and two masts of Sytka Spruce. Her engine is a six- cylinder Gardner with 114 horsepower, built in 1953.

ENTERPRISE was built as the first of a series intended to revitalise Shetland's fishing industry by being two knots faster than the rest of the Scottish fleet when running a full catch to the Aberdeen market. She was very successful at catching herring and white fish and had a Norse 'toch-e-toch' engine. However, she was soon overtaken by more powerful vessels and was sold by her partners to the Costie family in Westray in 1960. She was used for tourist trips of Orkney and was sold again in 1984. Her fish hold was converted to living quarters, with a new pitch pine deckhouse containing a galley equipped to serve twenty people. She has six berths aft, four cabins amidships and one single berth in the bow. The present owner reported in March 2007 that Enterprise was converted to a youth training schooner but is now in a very poor condition, having been vandalised. She retains 75% originality.