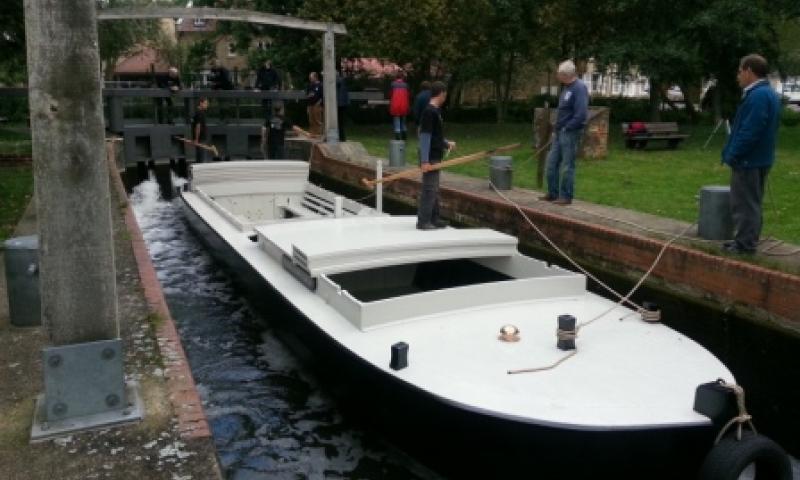 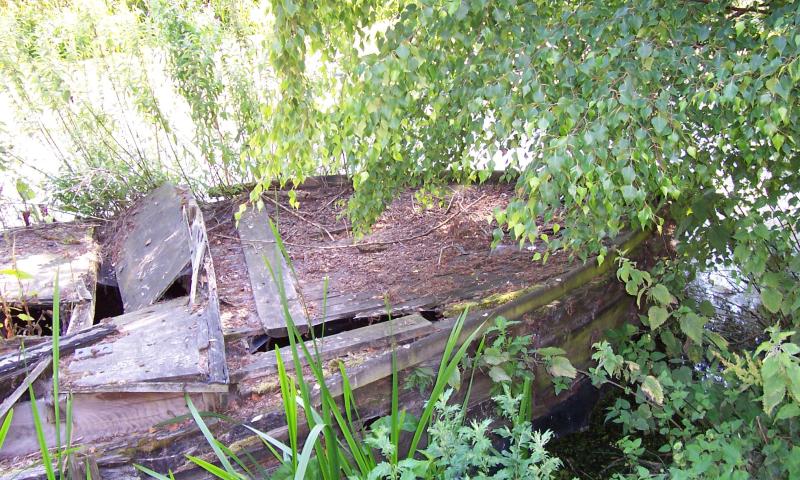 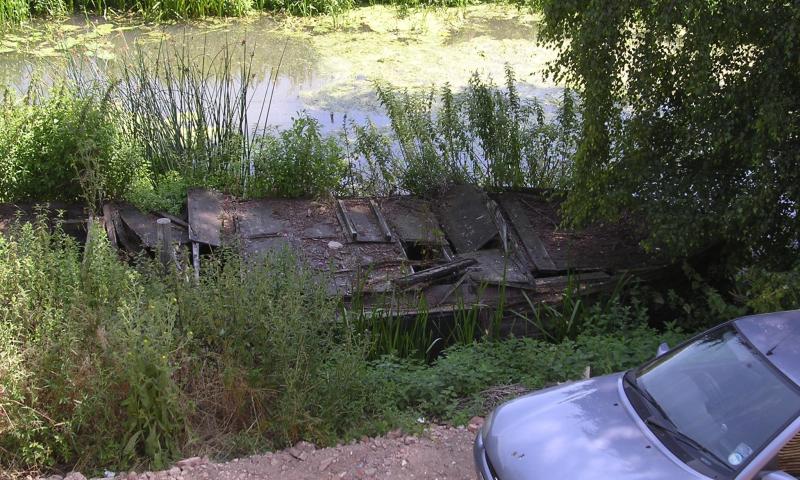 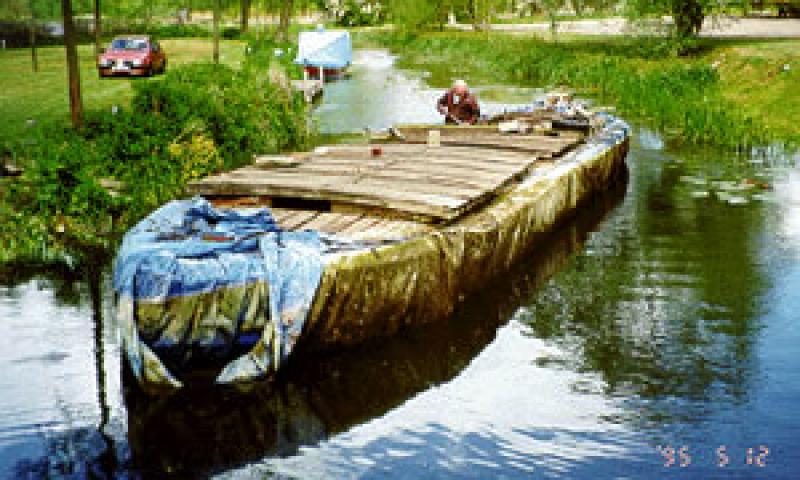 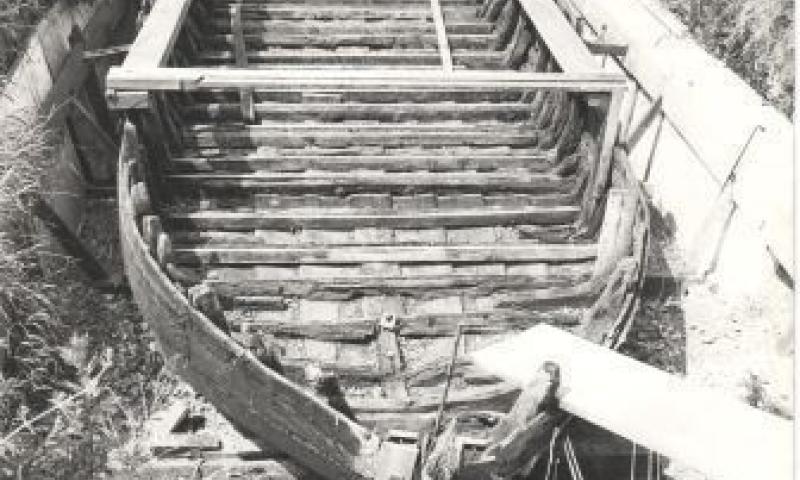 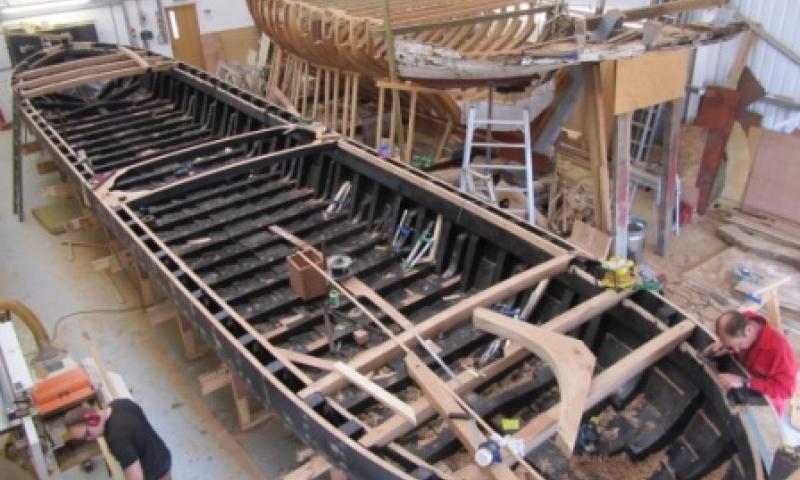 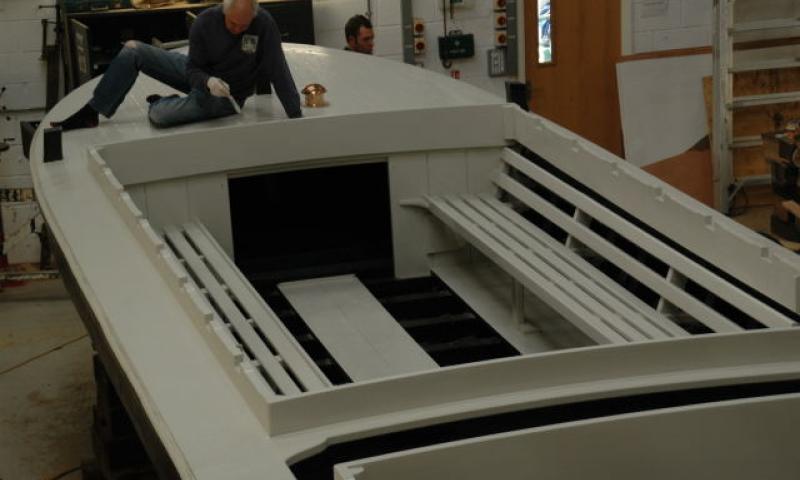 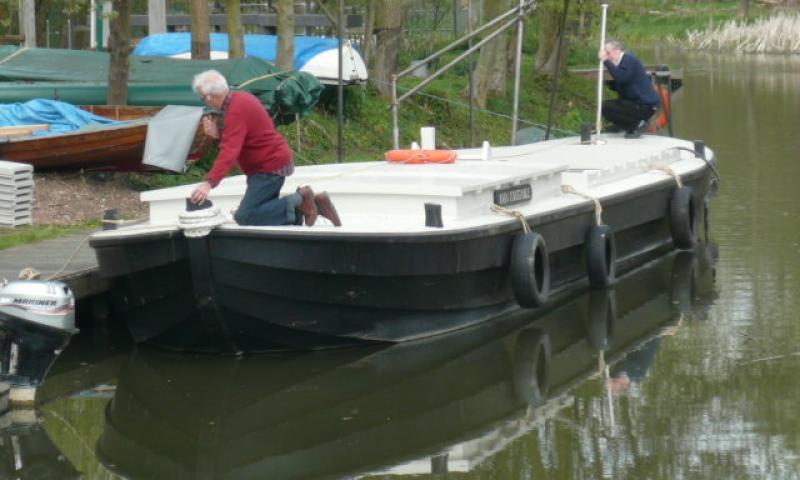 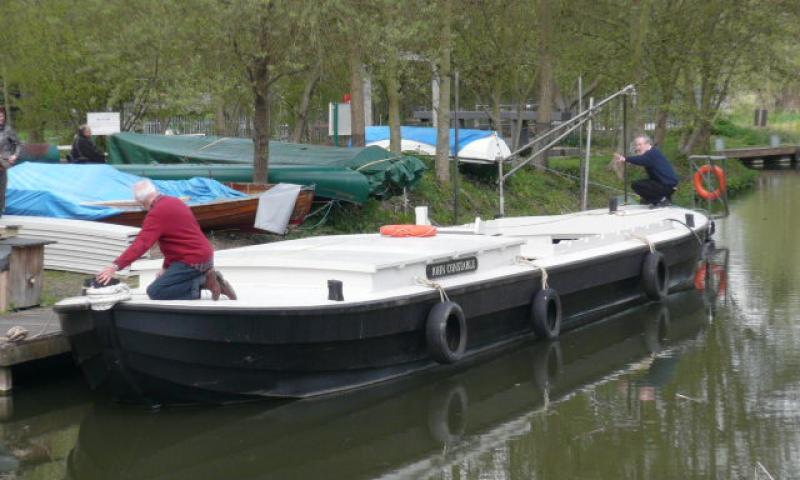 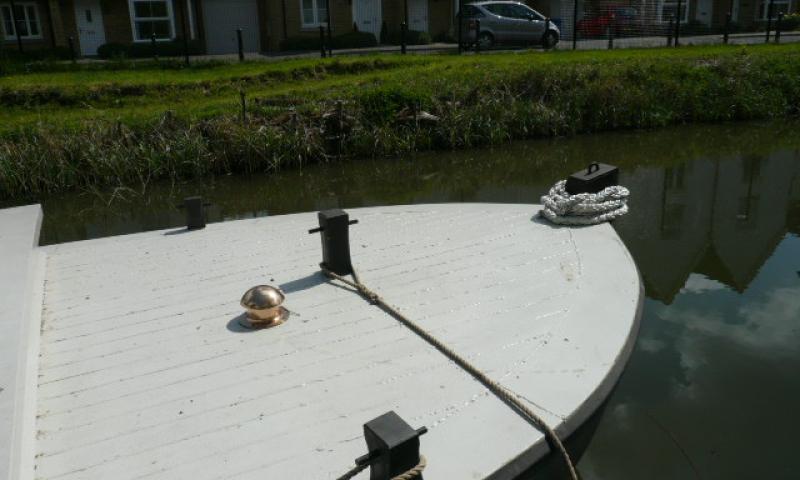 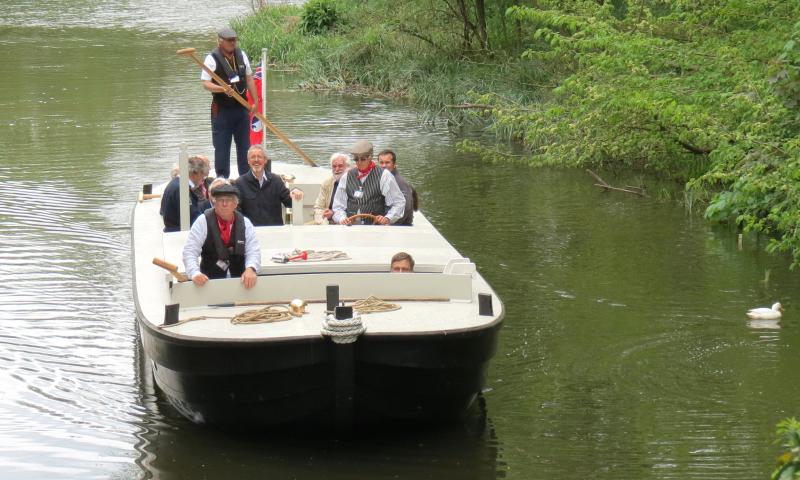 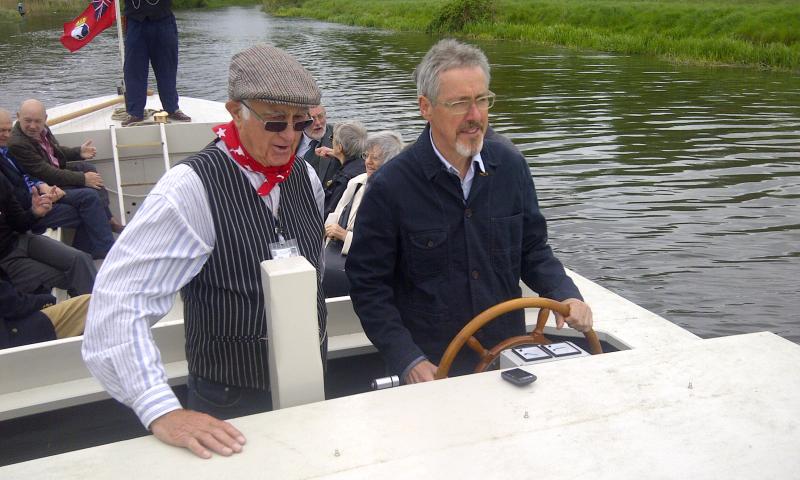 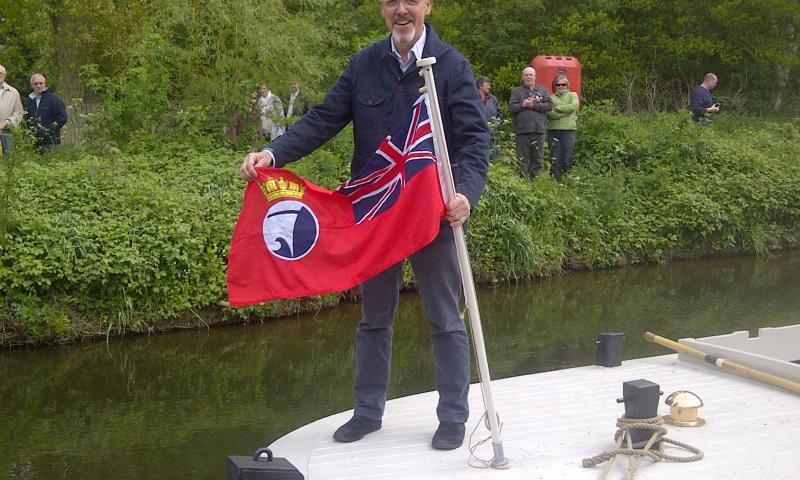 JOHN CONSTABLE was built as a River Stour barge circa 1880. Her hull was of clinker construction with oak frames and planking, fixed with iron nails. Her decking was softwood.  JOHN CONSTABLE was sunk from 1914 to 1972, but after being raised an initial restoration project was carried out, with full conservation in 2008.  Her frames and planks were rebuilt in oak as per her original specification. Her current layout was also kept to exact original dimensions, with two holds, and hatch covers over the cargo hold. JOHN CONSTABLE’s original paint scheme is unknown, although she probably had pitch black sides and her original tar pot has survived. Her interior is now black and white.  Although she would have been un-powered and towed by a single horse, she is now fitted with twin heavy duty electric motors, chosen because of their environmental benefits and for their silent qualities which help to retain the original operational ambiance.  JOHN CONSTABLE has also been equipped with a steering wheel and the engine has been fitted on a bracket over the stern in order to avoid drilling holes for a propeller shaft.

JOHN CONSTABLE was one of 14 similar craft operating in pairs from a large brickworks at Sudbury, transporting bricks down to the estuary for onward transport to London and beyond.  She is of the type made famous through the landscape paintings of John Constable, the artist, whose works such as ‘Boat Building at Flatford’, illustrate the traditional lighter design.  JOHN CONSTABLE has a strong regional significance continuing to work in the same area from build until the start of the First World War. The impact of the War on working communities can be seen by the fact that JOHN CONSTABLE was scuttled in 1915 along with the rest of her fleet for fear they might be used by the Germans if they invaded.

In March 2012, the JOHN CONSTABLE conservation project won a Special Commendation in the prestigious Mansura Trophy Awards, an international competition recognising innovation in the design, development and operation of marine vessels with hybrid, or all-electric propulsion systems. JOHN CONSTABLE has been recorded on the National Register of Historic Vessels since 1999 and is part of the National Historic Fleet.

JOHN CONSTABLE has a pointed bow and a pointed stern, with a raked curved stem and a single deck. As the lead barge of a pair, JOHN CONSTABLE has two holds capable of a load of 13 tons and a central bridge from where steering took place.  The rear lighter, with the same loading capacity, would have been permanently shacked bow to stern and acted as the rudder for the pair.  JOHN CONSTABLE has been conserved to operational condition and remains in the water at the River Stour Trust's Centre in Great Cornard, in her home waters near Sudbury in Suffolk where she spent her entire working life.

JOHN CONSTABLE, a River Stour barge, was built in approximately 1880, possibly at Flatford. Stour lighters operated on the River Stour from 1705 until the early part of 20th century carrying a variety of cargoes up and down the river. One of the most important was the carriage of bricks from various brickworks at Sudbury down to the estuary from onward transport to London and elsewhere. Coal was a common return cargo. Uniquely, the lighters operated in pairs, being permanently shackled bow to stern, with the rear lighter being used as a rudder for the pair.

The stern vessel had a single hold with a small cabin at the rear. Each boat was capable of a load of 13 tons, making a total of 26 tons for the pair. They were towed by a single horse, which was trained to leap on and off the foredeck as the towpath changed sides. The crew consisted of a captain and a horseman. The latter was often a small boy who sometimes rode the horse.

The journey from Sudbury to the estuary usually took about 2 days with an overnight stop at Horkesley where a special bothy was provided. The lighters continued to work until the 1914-18 war when they were scuttled in Ballingdon Cut for fear that they might be used by Germans if they invaded. However, two separately owned lighters continued to work on the lower part of the river until about 1938 when they were abandoned.

In 2008, a succesful Heritage Lottery Fund bid allowed JOHN CONSTABLE to be restored as part of the Dedham Vale and Stour Valley project.