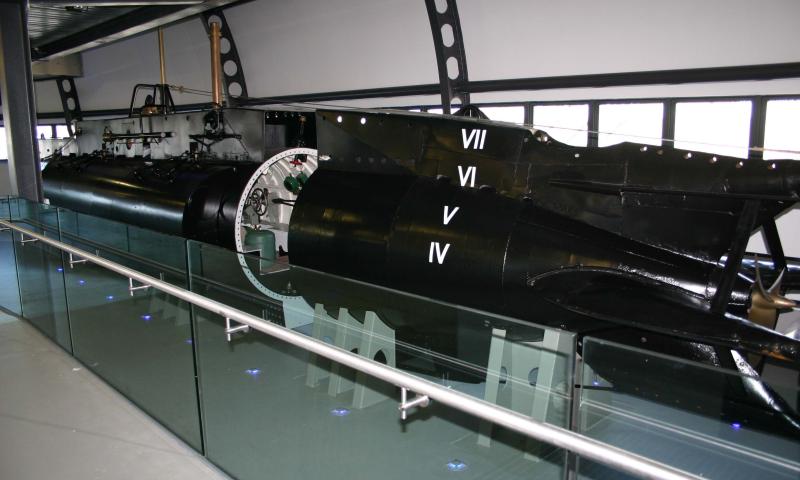 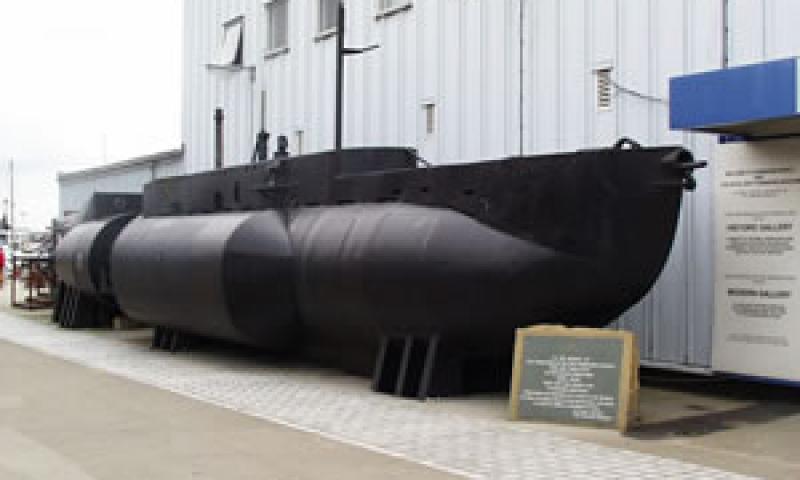 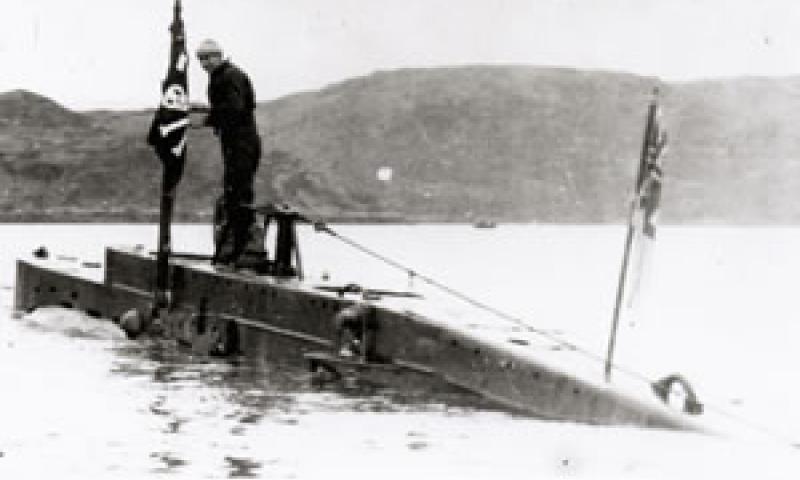 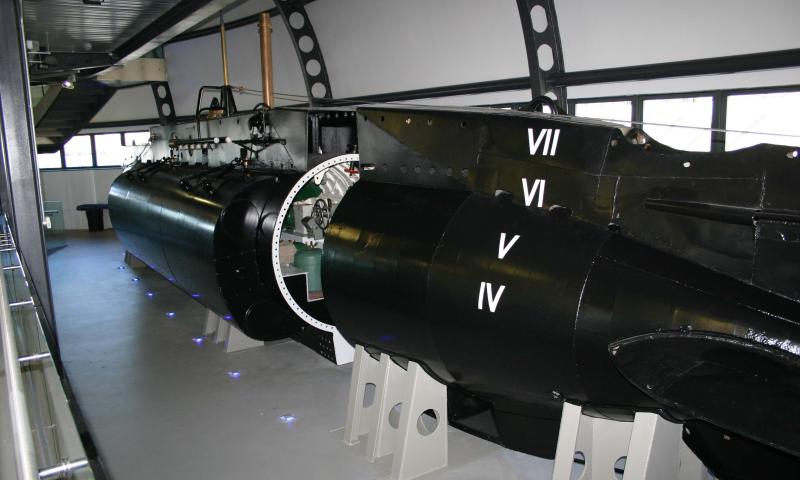 The submarine X-24 was built in 1943 by Marshall, Sons and Co. Ltd., at Gainsborough. She had a crew of four, and a Gardner diesel engine (42 horsepower) plus one electric motor (30 horsepower). Her commanding officers were Lieutenant M.H. Shean Royal Australian Naval Volunteer Reserve (RANA) and Lieutenant H.P. Westmacott DSC Royal Navy (RN).

On 22 March 1944, X24 sailed to Scapa Flow in preparation for Operation Guidance. By 9 April, HMS/m SCEPTRE had sailed for the Shetlands with X24 in tow, escorted by the depot ship HMS ALECTO. On 11 April, HMS/m SPECTRE left the Shetlands with X24 in tow and made an uneventful passage to Feje, the northern entrance to Bergen Leads. The operational crew of X24 consisted of Lieutenant M.H. Shean, Sub-Lieutenant J. Brooks, Sub-Lieutenant F. Ogden and ERA V. Coles. On 12 April, X24 was slipped at 20.50 and entered Fejesen on the surface, making valuable notes of search lights, navigational aids etc. The following day, X24 dived at 02.30 off Kalvenoes Light and continued at periscope depth, in the West Byfjord Channel where heavy traffic was encountered. One armed trawler passed uncomfortably close and asdic transmissions were heard, but failed to connect. By 07.30, X24 was safely in Bergen and proceeding to the entrance of Pudde Fjord. At 08.00, the floating dock was sighted at a range of 850 yards. It was flooded and empty and was partly obscured by the stern of a large merchant ship lying on the extreme end of the northern side of the coaling wharf. No net defences were seen. At 08.39 on a trial run, she passed under what was thought to be the dock and grounded, then turned and reversed her course. At 08.48, fully confident that he had located his target, Lieutenant Shean took X24 back under what he thought was the dock and laid charges one at each end. This was in fact the cargo ship BARENFELS. X24 then withdrew, passing under the full length of the target at forty feet and out into the West Byfjord minefields, which were negotiated without incident. At 21.30, after being kept deep by shipping, X24 surfaced. The air was foul and her crew were in bad shape. Lieutenant Shean and ERA Coles were violently sick. She then proceeded on the surface to her rendezvous point and, at 22.30, sighted SPECTRE. Both withdrew at full speed. After a tow was passed, SPECTRE proceeded with X24, now manned by her passage crew. SPECTRE and X24 entered Edrachillis Bay on 18 April. X24 having no defects, Lieutenant Shean was awarded the DSO. The operation resulted in the sinking of the BARENFELS and the damaging of the coal wharf which was out of action for the rest of the war.

On 3 September 1944, X24 was manned by the first passage crew under Sub-Lieutenant K. St J. V. Robinson, Royal Naval Volunteer Reserve and was towed by HMS/m SPECTRE and escorted by HMS ALECTO. They sailed from Rothesay on Operation Heckle - the destruction of the five hundred foot floating dock at Laksvaag, Bergen. They arrived at Balta Sound on 6 September and made X24 operational. She sailed the next day at 12.00 with Lieutenant H.P. Westmacott DSC RN, Sub-Lieutenant B.H. Dening RNVR, Sub-Lieutenant D.N. Purdy RNZNVR and ERA B.C. Davidson as crew, under tow of SPECTRE for the Norwegian coast. The weather deteriorated and both craft went down to one hundred and twenty feet. On 8 September 1944, Sub-Lieutenant Purdy was lost overboard whilst ditching gash from the wet and dry compartment. Two days afterwards, Sub-Lieutenant K.St.J.V. Robinson RNVR was transferred as a third hand. At 20.10, X24 slipped her tow off Feje. The passage up the Bergen Leads was uneventful, apart from grounding at forty feet to the north of Lanholm and X24 entered Pudde Fjord undetected. At 07.39 on 11 September, the floating dock was sighted empty, at full buoyancy and with its nets drawn back. X24 commenced her attack at 08.10, slipped her charges, then rendezvoused with SPECTRE and both submarines made their way home.

On 13 September, X24's tow was transferred to HMS ALECTO and she arrived back at Kames Bay a few days later. The operation resulted in the destruction of four of the six sections of the dock, while the sections at either end suffered minor damage which was an embarrassment to the harbour authorities. In addition, two ships, the STEN and KONG OSACR II, were both damaged. Traffic in the port was brought to a standstill for more than twenty-four hours and extra troops were used for security purposes. Lieutenant Westmacott was awarded the DSO. In 1950, X24 was formally paid off and mounted on the seawall at HMS DOLPHIN awaiting disposal. Approximately ten years later, she was moved to a more sheltered site within HMS DOLPHIN, still awaiting a verdict on her future.

Following surveys in October 1970 and January 1971, it was finally decided in January 1972 to restore her for display at HMS DOLPHIN as a memorial. On 14 February 1973, X24 was transported by road to Portsmouth Dockyard. She was fully restored and brought back to HMS DOLPHIN for display. In 1987, she was transferred from HMS DOLPHIN to her new site alongside HMS/m ALLIANCE at the Royal Navy Submarine Museum, which was opened to the public in August 1981. X24 is now a memorial to the officers and men of the Submarine Service.