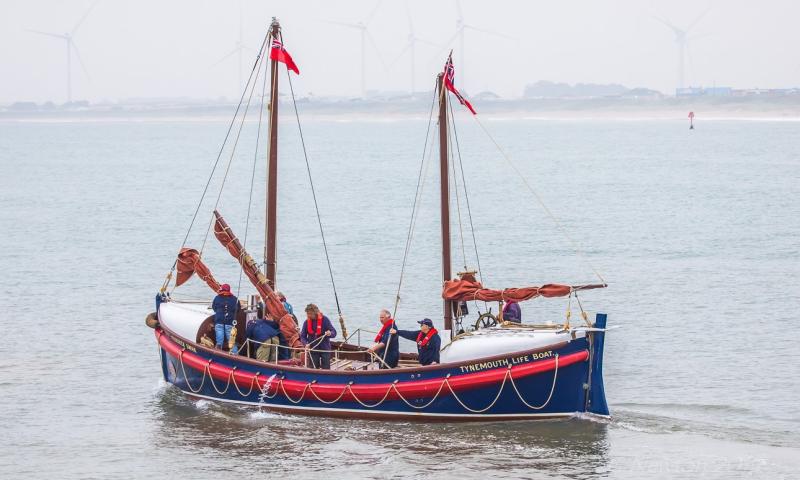 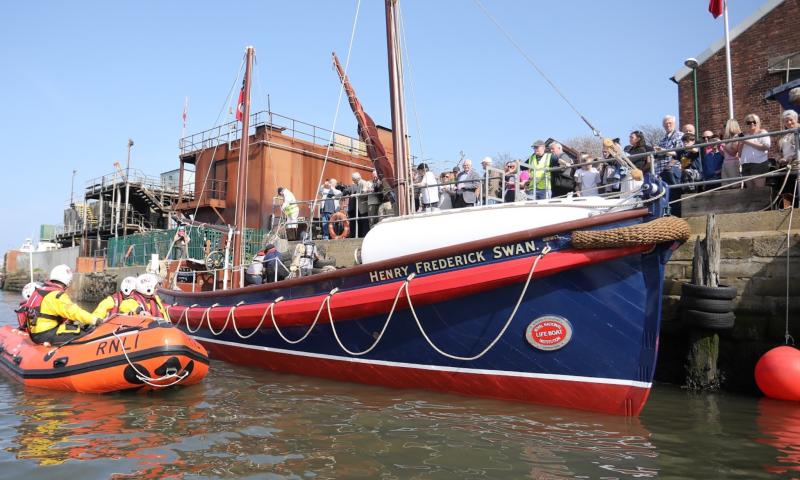 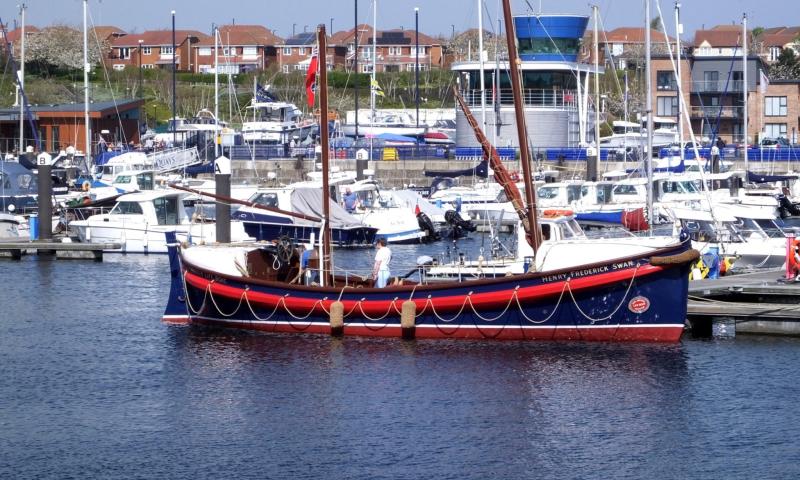 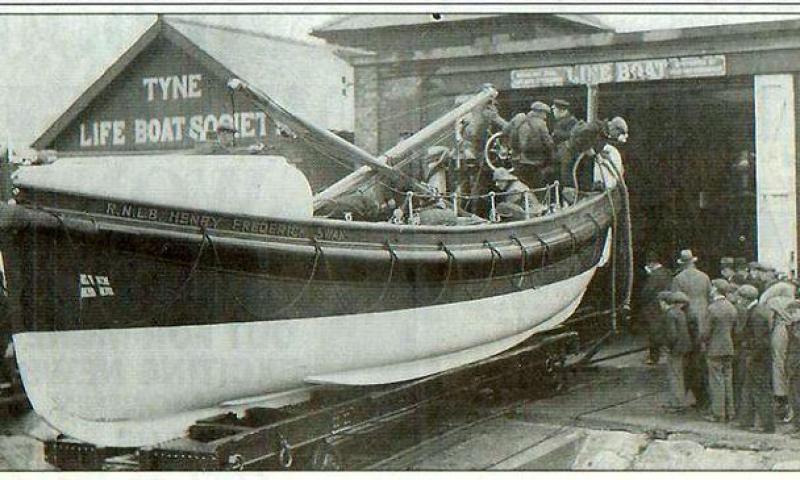 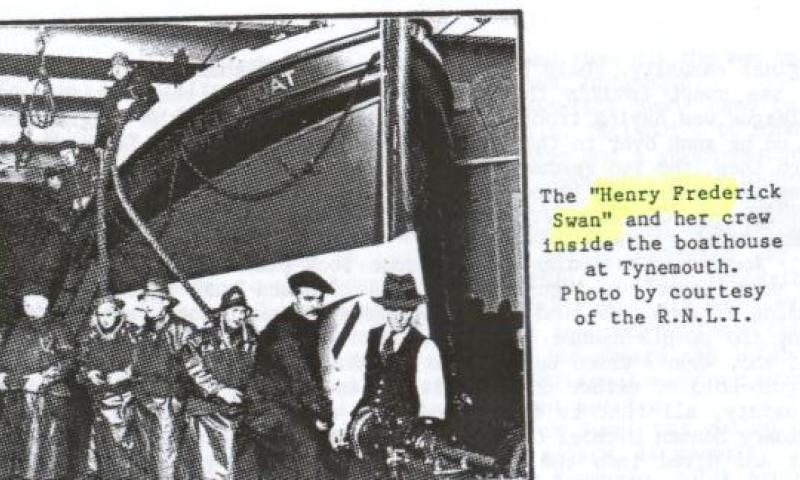 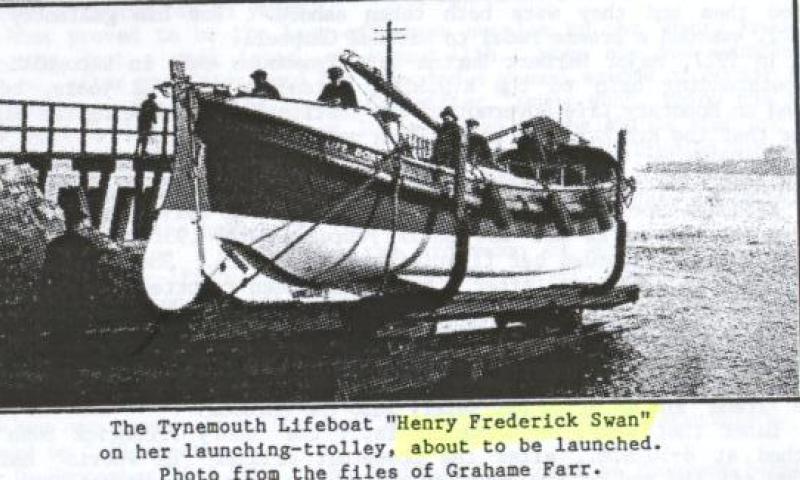 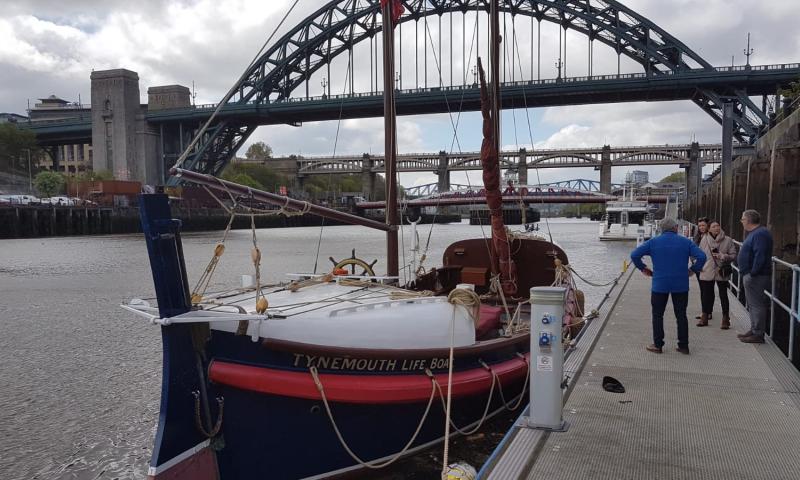 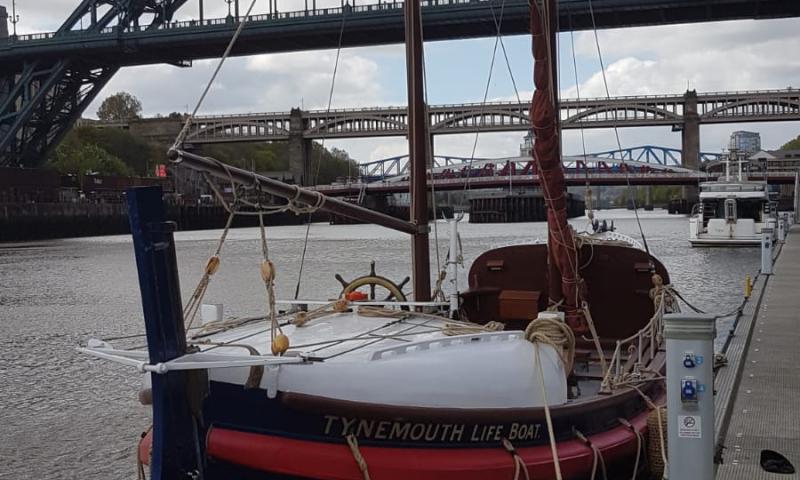 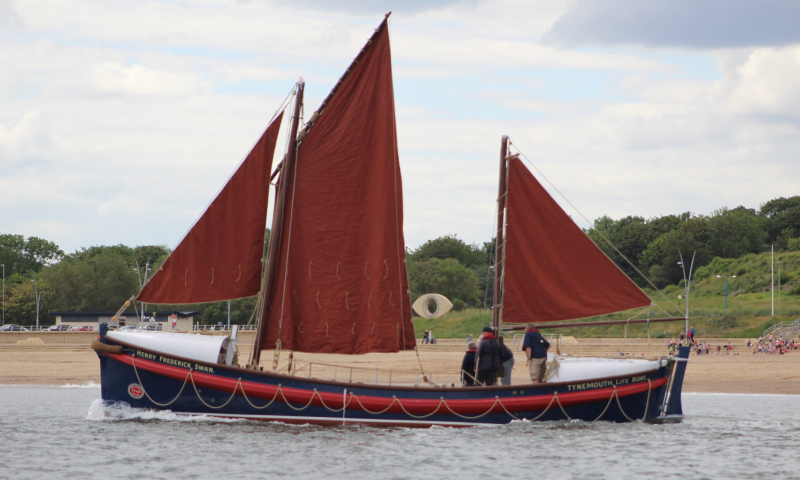 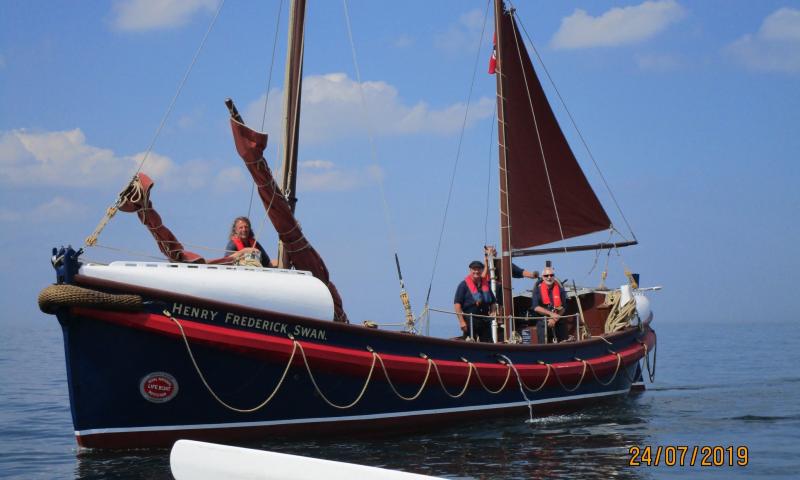 Henry Frederick Swan is an example of the innovative self-righting lifeboat with its cast iron keel and, despite losing her original Tyler C2 petrol engine and undergoing a major conservation project, retains a remarkable amount of original material. The hull is of double diagonal mahogany planking on a combination frame of rolled steel and sawn or steamed oak.   Her steel and timber framing is 95% original, her hull planking 87%, her deck, steering gear, fuel tanks, prop shafts and other engineering (apart from the engine and gearbox) are 90% original and her superstructure 80%.  The mast tabernacles are completely original, although her masts, sails and rigging have all been replaced to original maker’s design. Her ten Admiralty pattern sixteen foot oars and Linkleter rowlocks have also been replaced as the original did not survive.  All conservation work has been undertaken to achieve as near original build specification as could be ascertained through careful research.  She is now fitted with a 4 cylinder Gardner 4LW engine restored by North East Maritime Trust (NEMT) engineers.

The treacherous entrance to the River Tyne demanded advanced life-saving equipment and, for this reason, the Henry Frederick Swan was designed and her build financed by the widow of the Tyne’s most prominent ship builder, after whom the vessel was named.  She was built at the Cowes yard of S.E Saunders on the Isle of Wight, but her primary associations from her working life are locally to the Tyne.  Henry Frederick Swan remained on station at Tynemouth from 1918 to 1939 and played a key role in the Second World War, being brought back to service for a further six years after a bomb destroyed her more modern replacement.  She is recorded as being one of the longest serving lifeboats at a single UK station and was launched 32 times, saving 8 lives.  After finally retiring, she developed her significance with the younger generation by becoming a Sea Scouts vessel and then the vehicle for a nautical skills scheme.  A number of her original build drawings survive.  Henry Frederick Swan was listed on the National Register of Historic Vessels in 2014.

As a self-righting lifeboat, Henry Frederick Swan was fitted with a large number of shaped flotation boxes within her hull below deck to protect against sinking, as well as banks of non-return relief valve water discharge ports should she be overwhelmed by sea. Being a “transitional 3in1 vessel” propulsion methods comprise a standing lug sail, a mizzen sail and a staysail, set on two masts, both pivoted for ease of raising and lowering.  The propeller is accommodated within a tunnel to protect it from impact from rocks or wreckage. There are whalebacks fore and aft constructed in the same manner as the hull. The whole form of construction is complex but affords a flexibility to withstand impacts. Her conservation was carried out at NEMT’s workshop on Corporation Quay, South Shields, diagonally opposite her old lifeboat house and she is now berthed on the Quayside at Newcastle on Tyne, the very waterway on which she spent her working life.

HENRY FREDERICK SWAN is a 40 ft self-righting motor lifeboat. She was funded by Mrs Lowe of Bath and named in memory of her late husband, who was the managing director of the Armstrong Whitworth works on Tyneside, and who was for many years also chairman of the Tynemouth branch of the RNLI. Work started on building her in 1915 at the Cowes yard of S.E. Saunders. She was given the Official Number 646, was delivered to the RNLI Tynemouth station at North Shields, and entered service on 16 February 1918. She remained on station until 1939 when she was replaced by a more modern vessel; she then went into reserve between 1939 and 1941. However, in 1941 an enemy bomb landed on the lifeboat station destroying the new boat, and HENRY FREDERICK SWAN was brought back for further service, continuing to undertake rescue duties until 1947.

Upon her final withdrawal she was acquired by the 1st Tynemouth Sea Scouts; later she passed to the 1st Alnmouth and Lesbury Sea Scouts. By 1963 she was in the hands of Wearmouth Schools as part of a nautical skills scheme. In 1972 she was sold into the private ownership of Gerry Johnstone, in whose hands she remained until 2005. Renamed SURVIVAL, she was moored at his boatyard at Lemington and used for family river trips and fishing expeditions. Routine maintenance was carried out by Mr Johnstone and family members. Following the compulsory purchase of Gerry Johnstone’s yard and land in the early 2000s, the condition of the vessel slowly deteriorated. After a period of dereliction she was purchased for restoration by the North East Maritime Trust (NEMT). She was later taken to the Trust’s workshop on Corporation Quay, South Shields, opposite the site of her old lifeboat station. Prior to her re-launch in April 2019, the original maker's plaque and wheel spoke were donated to NEMT by Mr Johnstone's family.

In spite of the loss of the original engine, a remarkable amount of original material survives. The steel framing is 90% original, timber framing 50%, hull planking 70%, deck 90%, superstructure 80%, steering gear 90%, fuel tanks, prop shafts and other engineering (apart from the engine and gearbox) is 90% original and mast tabernacles 100%. Masts, sails and rigging have all been replaced to original design, along with oars and Linkleter rowlocks. HENRY FREDERICK SWAN is now displayed and operated on the water close to her original workplace, conveying to the public how lifesaving was undertaken on the Tyne nearly 100 years ago.

Berthed at NE1 Pontoon, Newcastle upon Tyne Quayside near the Millennium Bridge, HENRY FREDERICK SWAN is displayed and operated on the river Tyne to convey to the public how lifesaving was undertaken on the Tyne over a hundred years ago.  She also visits nautical events on the North East coast of England and Scotland and adjacent rivers - as is the present case with the Trust's other vessels.  In early 2019 she achieved MCA certification and following her re-launch at Easter 2019, she successfully completed engine and sea trials on a trip to Whitby and Bridlington.

The North East Maritime Trust (NEMT) operates its own workshop and adjacent boatshed with integral slipways at South Shields and is fortunate to have a loyal band of working volunteers dedicated to rescuing and restoring unique wooden inshore working boats.  Regional and national interest is significant due to HENRY FREDERICK SWAN's lengthy association with the Tyne, the Wear and the Northumbrian coast.  The development of the volunteer lifeboat tradition is an especially relevant local subject and the historic vessel complements the South Shields 1833 lifeboat Tyne, also restored by the Trust for display at South Tyneside Council.  Tyne is the world's second oldest surviving lifeboat and HENRY FREDERICK SWAN's is recorded as being one of the longest serving lifeboats at a single UK station.

Whilst the HENRY FREDERICK SWAN lifeboat was successfully restored between 2005 and 2019, she requires costly annual maintenance and repair as is necessary with all wooden boats. North East Maritime Trust gratefully acknowledges the many financial donations received over the years and particularly that of the Association for Industrial Archaeology that enabled the final build and fitting out stages to be completed.  It is fitting that HENRY FREDERICK SWAN was returned to the Tyne for restoration opposite the present lifeboat station at which she served for a record twenty eight years.  As with all NEMT boats, HENRY FREDERICK SWAN can be seen sailing on the east coast or at festivals and demonstrations as far south as Bridlington and north of the Firth of Forth.

NEMT is committed to continuing its policy of fund raising to continue the maintenance and conservation of its fleet and is currently (as of October 2020) engaged in restoring the 1886 South Shields built lifeboat BEDFORD, together with her original launching carriage.  BEDFORD is listed on the National Historic Ships Register and is believed to be the only remaining lifeboat of her age in the world to be complete with original wheeled launching carriage and a full set of oars and lifesaving equipment.

Watch a pictoral video of the conservation process from 2005 to re-launching in April 2019 here.