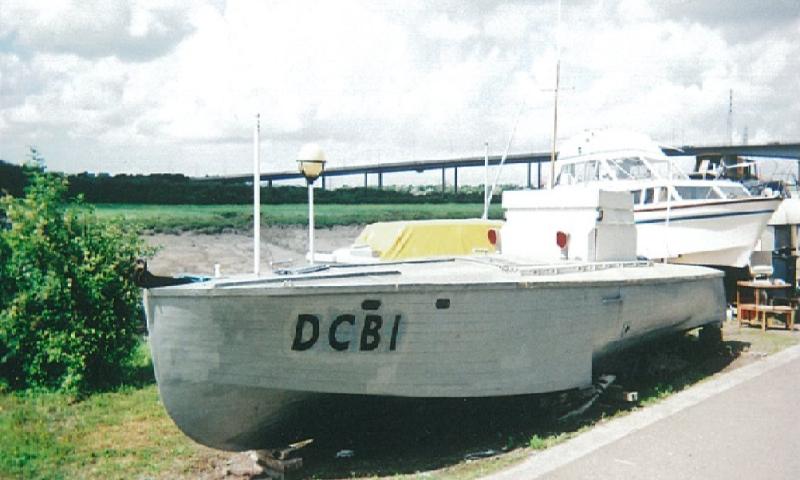 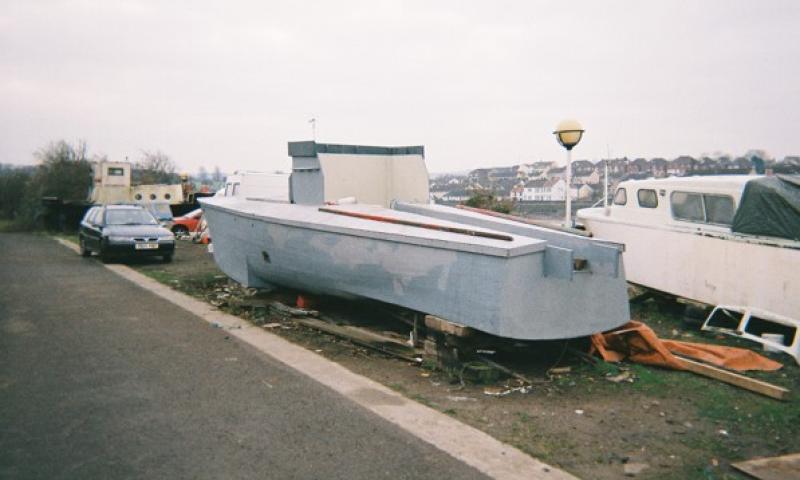 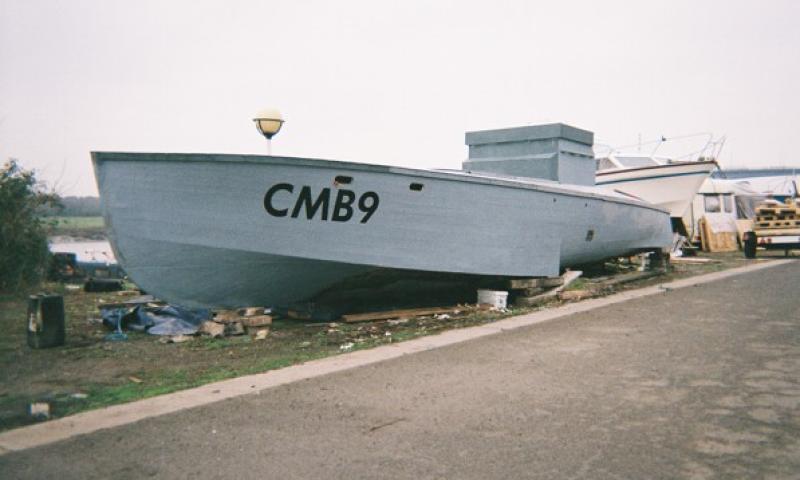 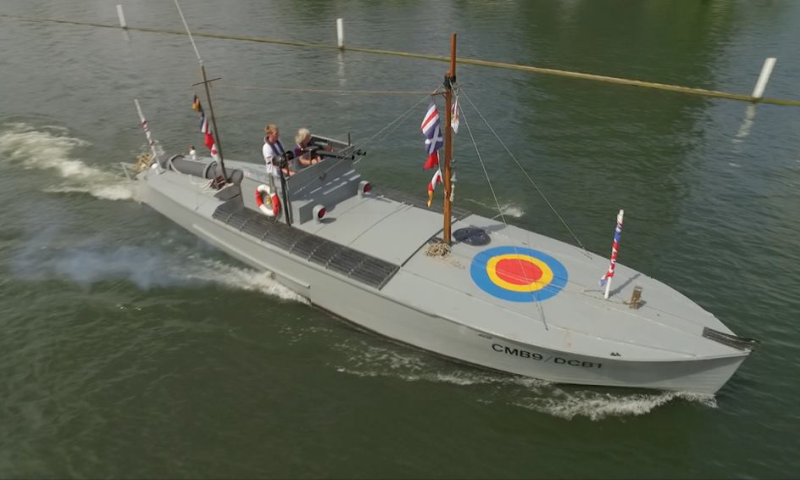 DCB 1 was built as a motor torpedo boat for the Royal Navy in 1916 by John Thornycroft at his Hampton Launch Works. She was originally designated CMB9. CMBs (Coastal Motor Boats) were experimental torpedo launch vessels, and CMB 9 was one of twelve such vessels ordered by the Admiralty. They were lightweight petrol-driven craft designed to skim across the water, creep up on German destroyers, fire their missiles with deadly accuracy and then race away. On her re-designation as a Distance Control Boat and the carrying out of top secret experiments to find out  whether unmanned fast patrol boats armed with torpedoes could be controlled via aircraft from the air and directed towards enemy targets, the vessel was refitted with twin screws, bilge keels, radio masts and a small bridge with wireless controls.

CMB9’s physical strength is due to a large number of ribs placed very close together. She has a stepped hydroplane hull and is of double diagonal mahogany construction. She was propelled by a single screw and was capable of 40 knots. She carried one 18 inch torpedo. Although an attempt was made at some point to convert her into a cabin cruiser, the hull is believed to be some 95 per cent original. Recent work has involved strapping up part of the hull that had sagged to get it back in place, and repairs to the step. The boat’s twin engines which had replaced those fitted when she became a DCB were Leyland 400 diesels dating from the 1950s. New shafts were acquired and new rudders made.

The suggestion for this type of vessel came from three junior naval officers; lieutenants Hamden, Brewer and Anson. Photographic evidence shows the then Prince of Wales, later King Edward, taking the helm during the vessel trials, which saw the method of launching the torpedo changed from the bow to the stern.  CMB 9 was based originally at Osea Island on the River Blackwater in Essex giving her strong connections to the East Coast.  However, at the end of 1916 CMB9 was transferred to Dunkirk along with three other boats to begin harrying German ships. She saw action in 1917 at Zeebrugge during one prolific mission accompanied by CMB1. However, on 10 September 1917 the Admiralty confirmed that she was to be one of four vessels to be used as Distant Control Boats (DCBs). Distant Control Boats were never used operationally during the First World War, but their development continued for many years afterwards. DCB1 returned to her former role as a CMB once the trials were completed. As CMB9 she remained in service with the Royal Navy until the early 1950s. She has international significance as a result of active service during the First World War and played a national role during her involvement in the experiments on the feasibility of Distant Control Boats from 1917. DCB1 took part in the Queen’s Diamond Jubilee Pageant in 2012 and was awarded the Transport Trust Peter Allen Award for Restoration presented by HRH Prince Michael of Kent the same year.  She is believed to be the sole surviving Distant Control Boat and has been recorded on the National Register of Historic Vessels since 2011.

The primary function of DCB1 was as a Coastal Motor Boat, a type of experimental torpedo launch vessel. This function was changed in 1917 when she became a Distant Control Boat, which entailed substantial changes to her physical structure. She was built with particular materials to a pre-determined design which was intended to make her ideally fitted to her intended purpose. She retains most of these elements today. Although not the most elegant of vessels her high pointed hull presents an impressive image of the strength, power and speed she was designed to project. She is currently located at Avonmouth where she is undergoing conservation to full operational condition as a Distant Control Boat, with the aim that she will return, by sea, to visit the old Navy bases where she was once stationed.

This historic vessel was built as a motor torpedo boat for the Royal Navy in 1916 by Thornycroft, named CMB9.  She is of double diagonal mahogany construction and was one of twelve such vessels ordered by The Admiralty.  She was based at Osea Island on the River Blackwater in Essex and also Dunkirk.

The vessel saw action in 1917 at Zeebrugge during one prolific mission accompanied by CMB1.  Both vessels were on the Dover patrol and went to the rescue of pilots, whom were shot down ten miles off Nieuport, when they came under attack by four German torpedo boats - CMB1 took a direct hit and was blown up.  CMB9 escaped unscathed.  The then Prince of Wales took the helm whilst on a trial run when he was based at Dartmouth Navy College, photographic evidence is available to sustain this.

In 1918 the vessel was converted into a top secret Distance Control Boat (DCB) of which it was the prototype, allocated the number DCB1.  Royal Navy Records state that CMB9 = DCB1.  The vessel was controlled via aircraft and fitted with twin screws, bilge keels, radio masts and a small bridge with wireless controls, which allowed for the element of surprise whilst attacking the enemy, a role which was successfully sustained for many years.
Unlike the vessel's role as CMB9, little is known about DCB1 and to date, this remains classified.  However, it is known that the torpedo could be controlled by firing off the stern, control was via aircraft and wireless control.  Speeds were of 40 knots which made it a hard target to hit.  DCB1 remained in service with the Royal Navy until the early 1950s and it is believed that there are no other surviving DCBs.

DCB1 is currently undergoing restoration to full operation condition with the aim that she will return, by sea, to visit the old Navy bases where she was once stationed. 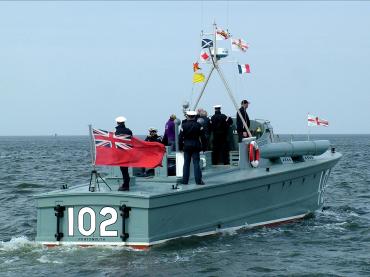 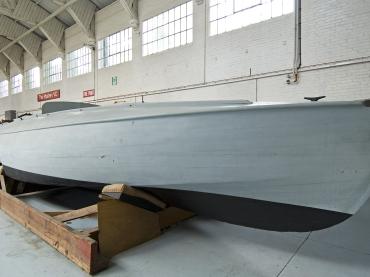 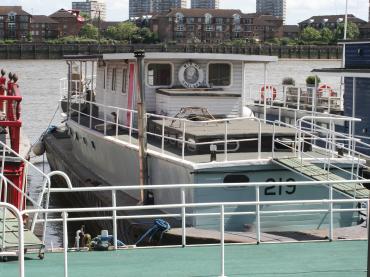