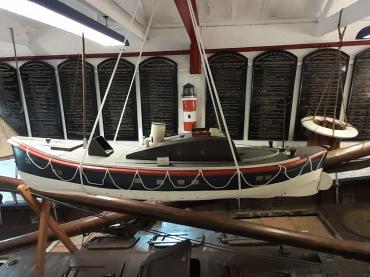 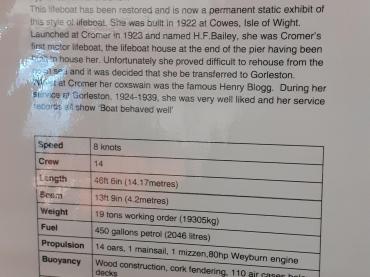 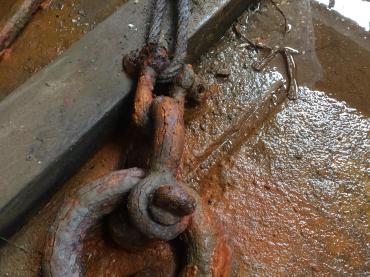 The lifeboat JOHN and MARY MEIKLAM of GLADSWOOD (ON-670) was built by J. Samuel White & Co. of Cowes in 1923 and went into service as the Cromer No. 1 lifeboat under her original name H.F. BAILEY (she was the first of four lifeboats launched under that name). In her first year of service she was launched 3 times, saving 12 lives.

She is a Norfolk & Suffolk single motor lifeboat, a type specifically designed to work in the shallow beaches and sandbanks of East Anglia.  After 12 months based in Cromer she was relocated a few miles south to Gorleston, where she served as the lifeboat for 15 years, between 1924 and 1939. During this time she launched 155 times and saved 211 lives. Her crew were awarded a number of medals and gallantry awards. In 1924, as part of RNLI centenary celebrations, Coxswain William Fleming (along with other Gold Medal awardees) was received at Buckingham Palace by King George V and awarded the Empire Gallantry Medal. In 1926 Fleming was awarded a RNLI Bronze Medal for service to the ketch HENRIETTA.

In 1927 the JOHN and MARY MEIKLAM of GLADSWOOD was involved in service to the Dutch oil tanker S.S. GEORGIA, in what was later described as ‘one of the greatest in the history of the service’. At one point she spent 21 hours at sea. It was a joint rescue by the Great Yarmouth, Gorleston, Cromer, and Southwold lifeboats. Coxswain Fleming was awarded a RNLI Silver Medal, and the Cromer coxswain, Henry Blogg was awarded his second Gold Medal. Crew members were awarded a further 13 Bronze Medals. The Queen of Holland awarded Fleming a watch, and his crew received a Letter of Thanks. In 1938 the RNLI awarded a second Bronze Medal to Coxswain Charles Johnson for an 11-hour service to seven barges.

In 1939 the JOHN and MARY MEIKLAM of GLADSWOOD was transferred to the Relief Fleet, and over the next 13 years she served at 19 lifeboat stations throughout England and Wales. She served at Walton & Frinton, Lowestoft, Ramsgate (twice), Great Yarmouth & Gorleston, Holyhead, Lytham St Anne (three times), Pwllheli, Salcombe, Shoreham Harbour, Newhaven, Falmouth (twice), Fowey (twice), and Weymouth. During this time she was launched 49 times, saving 74 lives. During the Second World War she provided notable service at five different stations between 1939-45.

In 1952, after almost 30 years of service, during which she had been launched 204 times and saved 285 lives, JOHN and MARY MEIKLAM of GLADSWOOD was sold out of service and given the name PEN CW.  In 1994 she was donated to the RNLI for display at Gorleston Lifeboat Station as a permanent static exhibit. She is one of three surviving Norfolk & Suffolk single motor lifeboats, and has been on continuous display since June 1994. Today, she is the key object in telling the story of the Great Yarmouth & Gorleston Lifeboat Station, which has one of the most outstanding RNLI lifeboat station records for service and awards. She was one of the hardest working lifeboats in the RNLI’s fleet during the 1920s, 1930s, and 1940s.