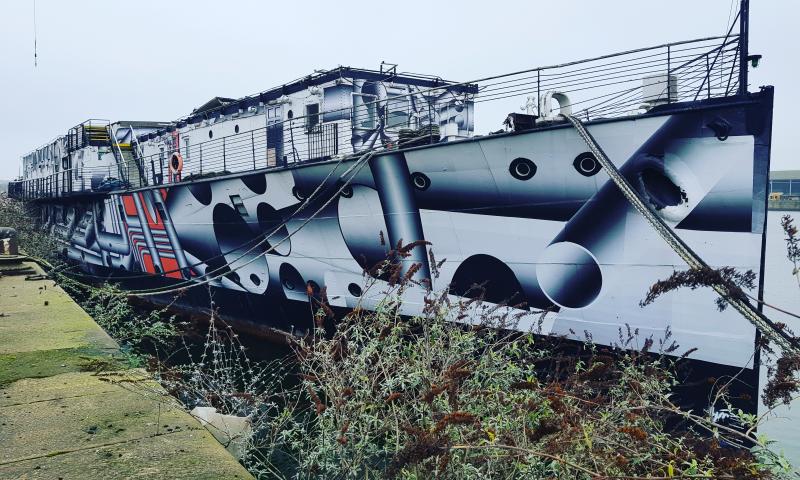 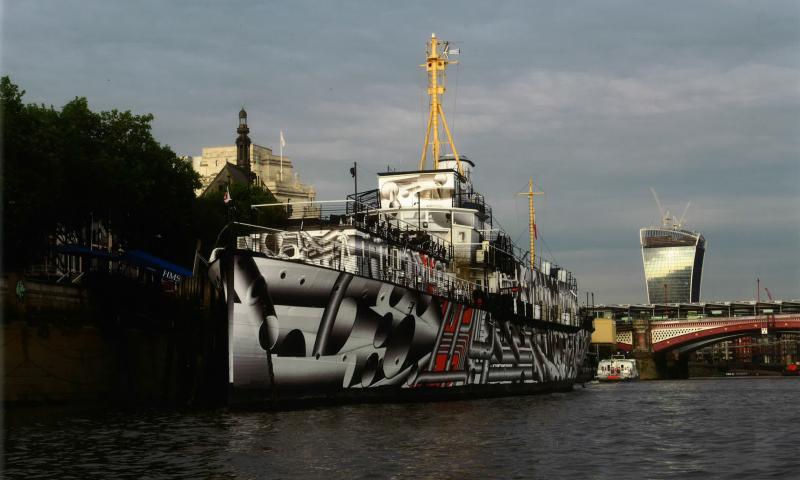 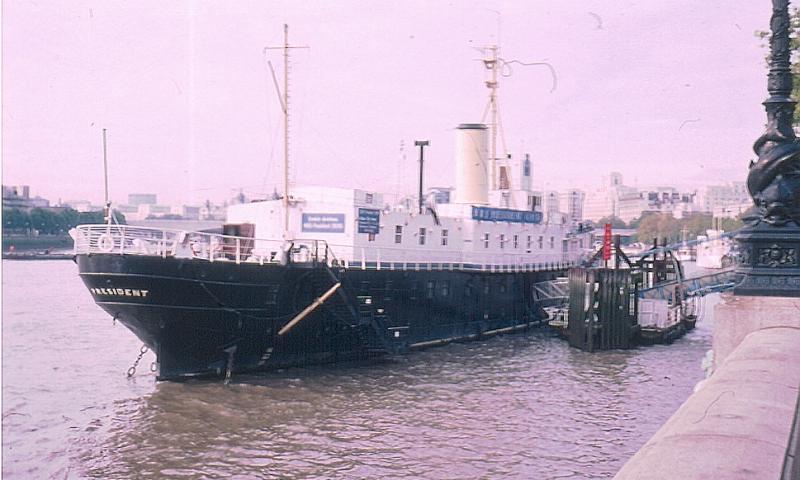 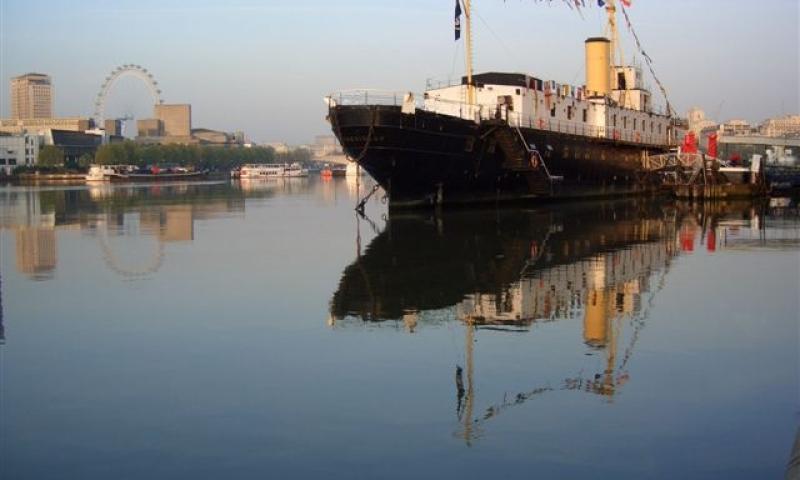 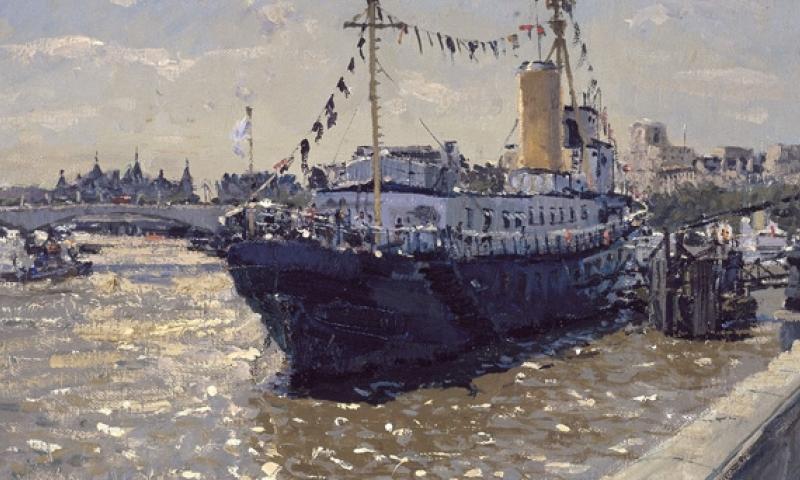 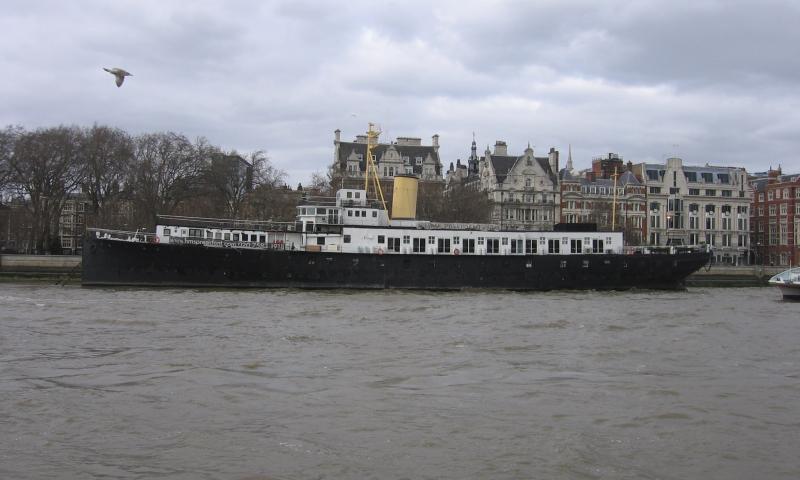 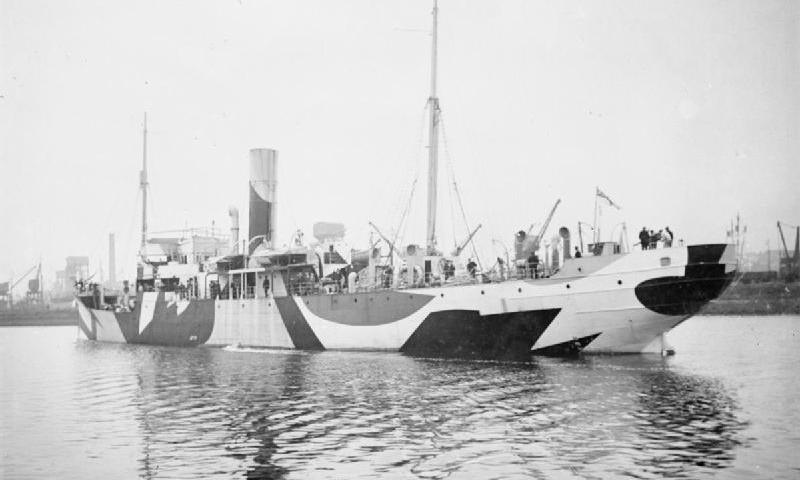 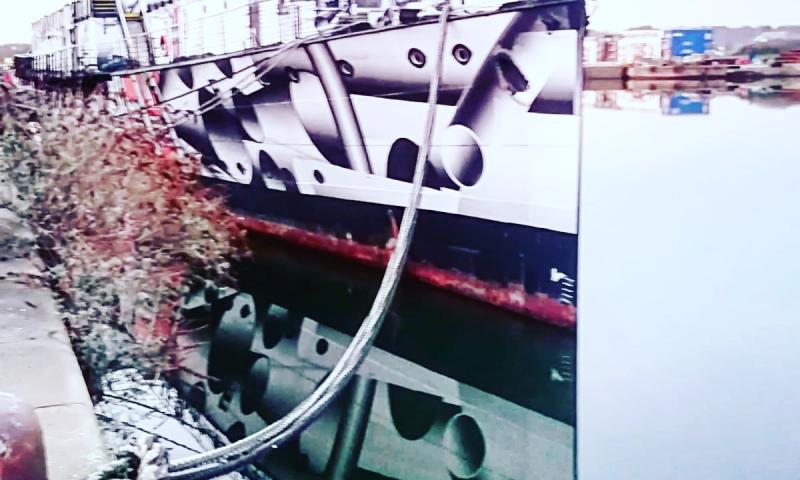 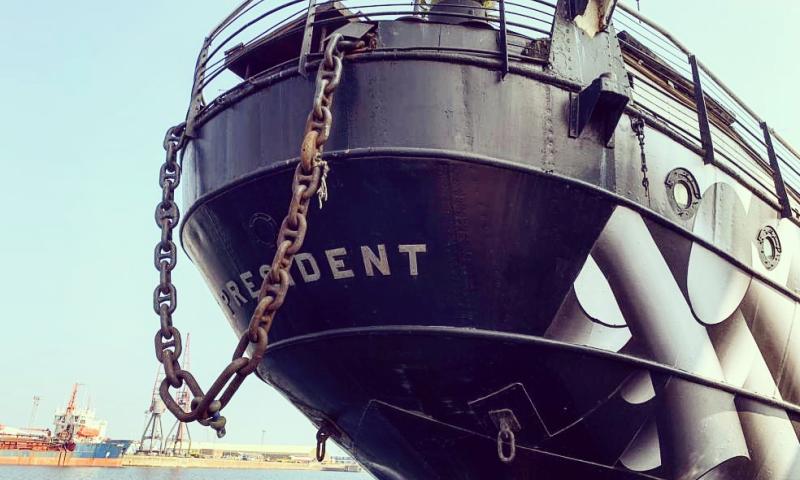 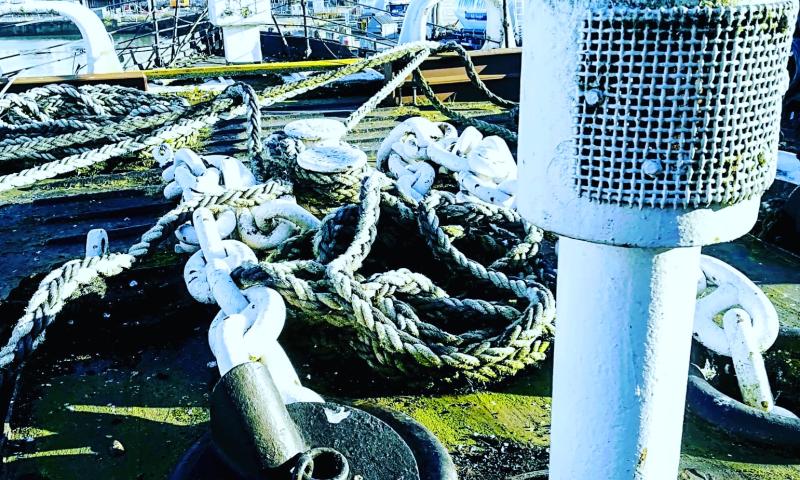 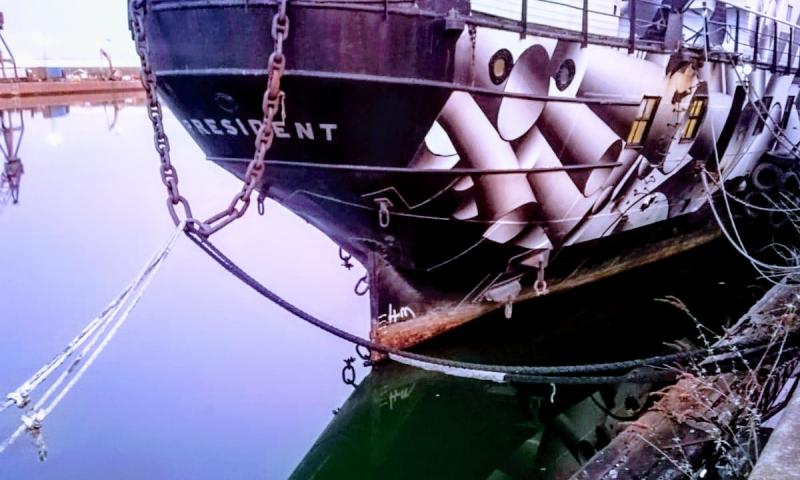 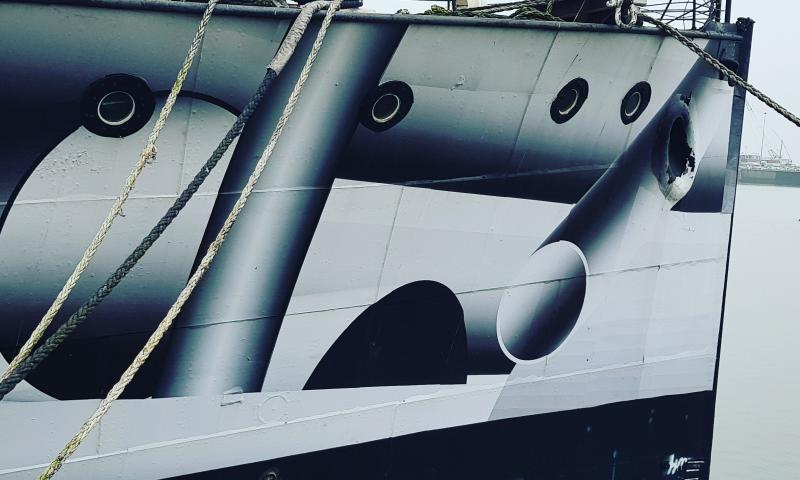 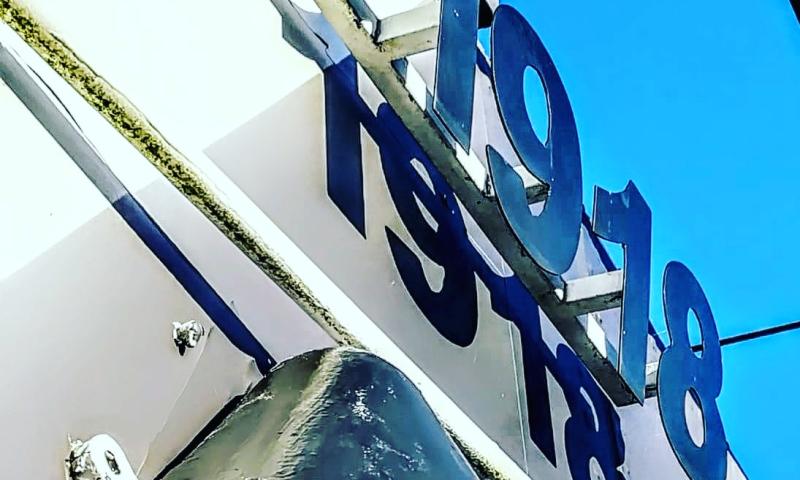 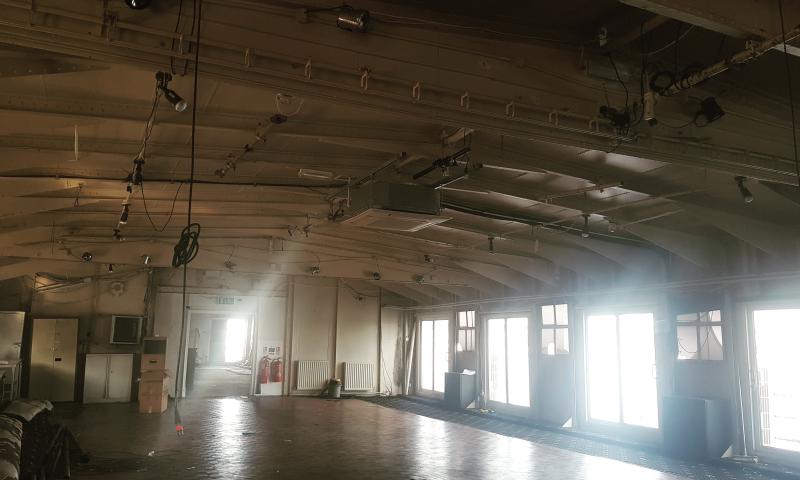 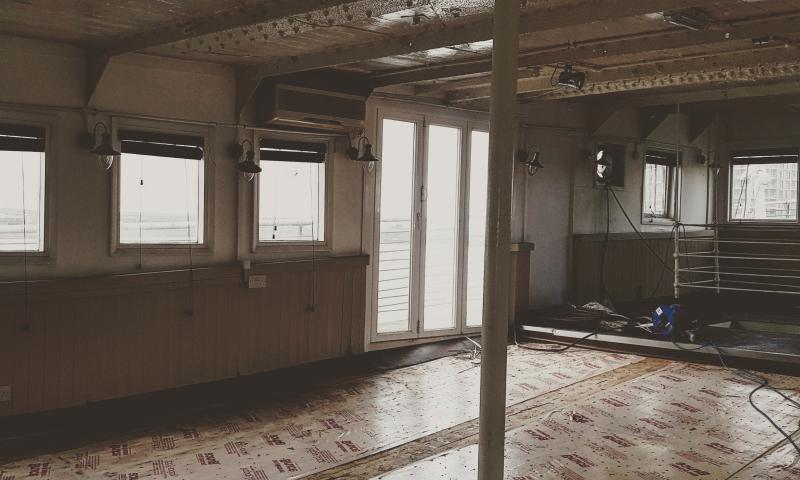 1. What is the vessel’s ability to demonstrate history in her physical fabric?

HMS PRESIDENT'S hull and forecastle remain as built, complete with anchor chains, whilst the rest of the vessel follows her 1950s formation, representing her role as a Royal Navy training ship between 1922 and 1989.  In 1922, alterations to her physical fabric included fitting square windows on the lower decks, removing her steam triple expansion engines and adding a top deck for parade, drilling and small arms gunnery practice.  In this way, although her internal accommodation is set up as offices and function space, her current configuration reflects the two significant eras of her history, her First World War role and her long service as a drill ship. Unfortunately, her funnel was damaged beyond repair in 2016, but photographs and measurements were taken so it could be replicated in future.

2. What are the vessel’s associational links for which there is no physical evidence?

HMS PRESIDENT was built as an Anchusa class corvette by Lobnitz Co Ld at Renfrew in 1918, giving her a Scottish association. She was commissioned as a Flower class anti-submarine Q-ship (often referred to as a ‘Mystery Ship’) and is now one of three surviving Royal Navy warships built during the First World War.  Her original name, HMS SAXIFRAGE, relates to the Saxifrage genus of plants which includes the variety London Pride and underlines the long connection with the city which she now enjoys. In 1922, she was moored permanently at Blackfriars on the Thames and was used as a Royal Naval Reserve drill ship for sixty-five years. At this time, she was renamed HMS PRESIDENT after a number of distinguished naval vessels with this name, dating back to 1645.  HMS PRESIDENT has been recorded on the National Register of Historic Vessels since 1996 with the status of being a member of the National Historic Fleet.

3. How does the vessel’s shape or form combine and contribute to her function?

HMS PRESIDENT retains her distinctive hull form which was designed to look like a merchant ship, allowing her to fulfil her role as a decoy to lure U-boats to the surface.  In 2014, as part of the First World War commemorations, her hull was covered once more in a ‘dazzle’ design, courtesy of artist Tobias Rehberger.  Acting as an escort vessel to merchant fleets, her 4-inch and 12-pounder naval guns would have been well concealed from sight.  In this capacity, she was one of the first purpose-built anti-submarine fighting ships and a forerunner of the frigates of modern times.  After her change of use to a training vessel, she now boasts four decks, with internal spaces including the Captain’s Quarters, Drill Hall and adjacent Gunroom, Quarter Deck and Ward Room.  HMS PRESIDENT is currently at Chatham docks, where she was refitted in her Navy days, pending dry dock availability for conservation work.  Following this, she will be opened as a museum dedicated to Q-ships and the Royal Navy.

This statement was updated as part of the Heritage Lottery funded First World War project. http://www.ww1britainssurvivingvessels.org.uk/

One of the last examples of a Royal Navy sloop, HMS PRESIDENT was built in 1917 by Lobnitz & Co. Limited of Renfrew as the Flower Class sloop HMS SAXIFRAGE.  She was built for convoy escort duty and became a RNVR drill ship in 1922.   It was in 1922 that she was moored on the Thames Embankment in London and she has remained there until 2016 as a constant backdrop to the river and the city.  While she was a drill ship all Naval Officers employed in the Admiralty in London were nominally appointed to HMS PRESIDENT.  Since then she has had several owners including Inter-Action, an educational charity which helped disadvantaged children and young people.

Update Feb 2020: HMS PRESIDENT is currently under restoration and awaiting dry dock in 2020/2021.

Watch this short film on the history of HMS PRESIDENT.