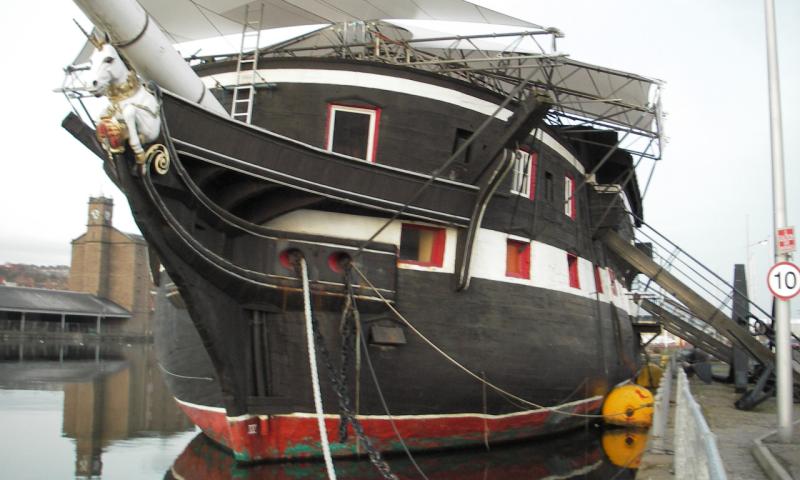 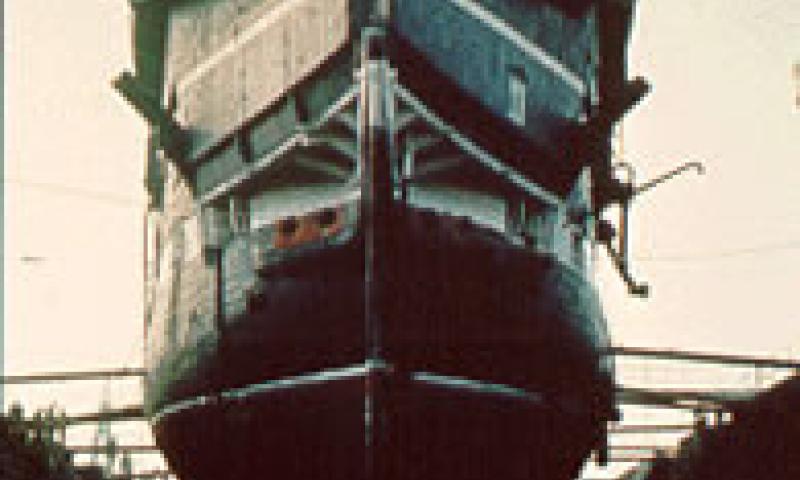 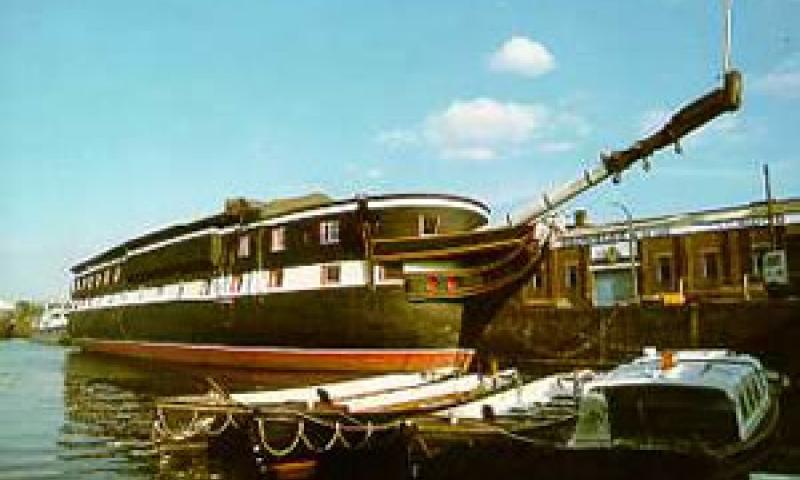 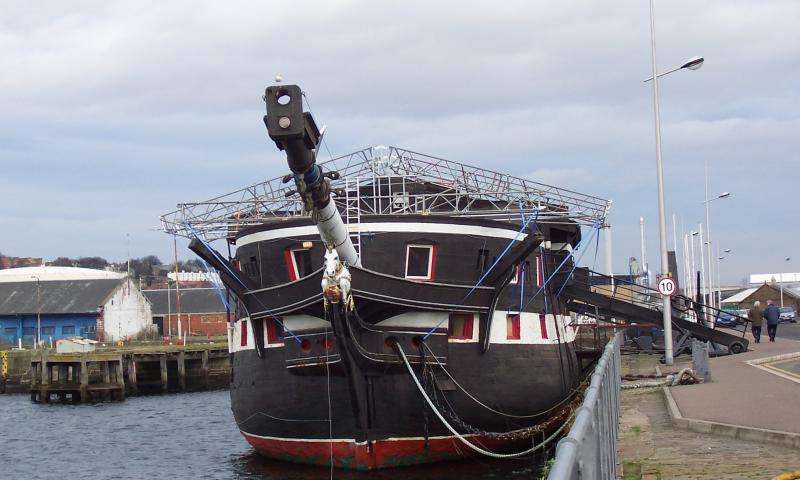 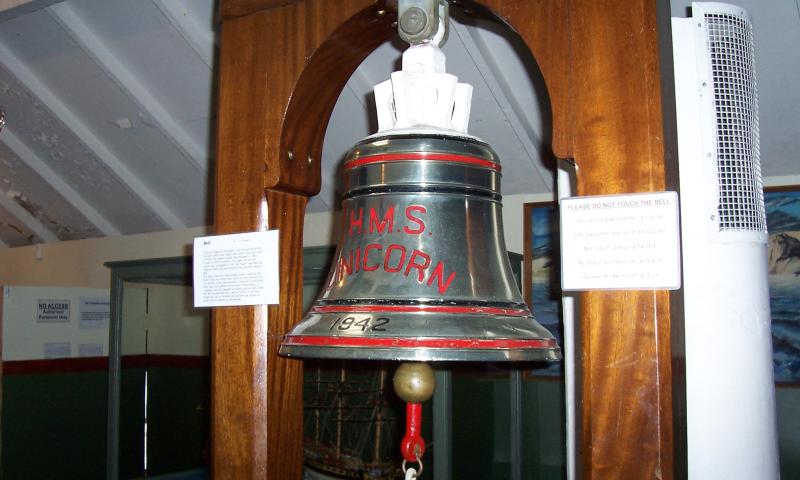 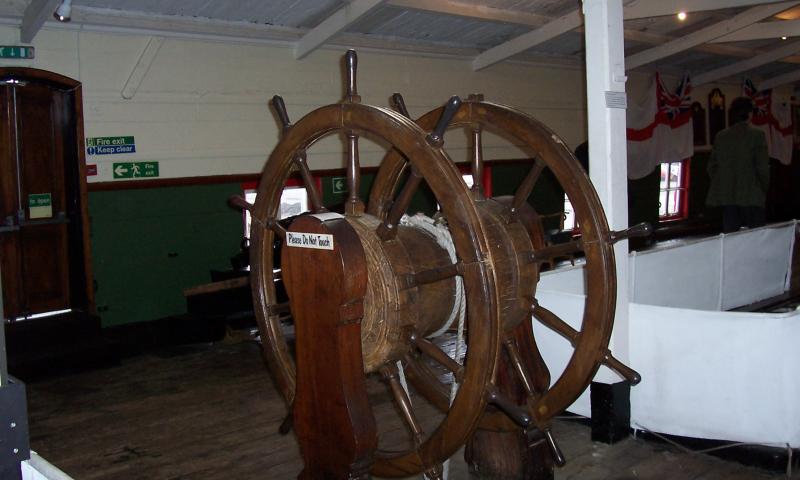 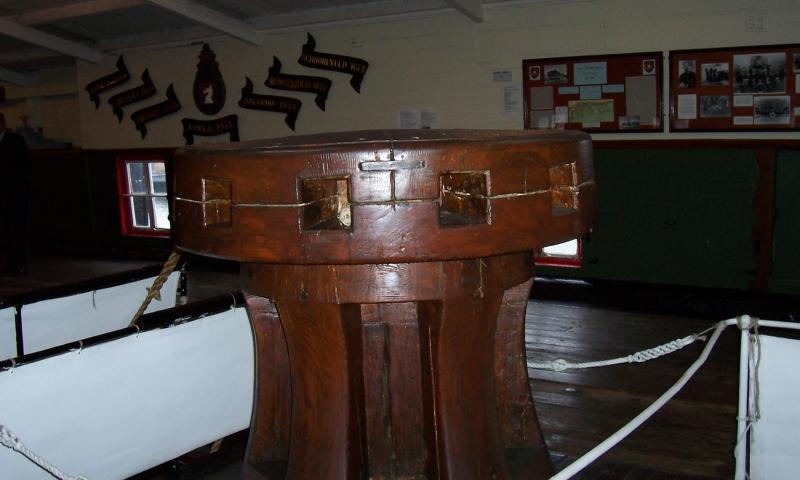 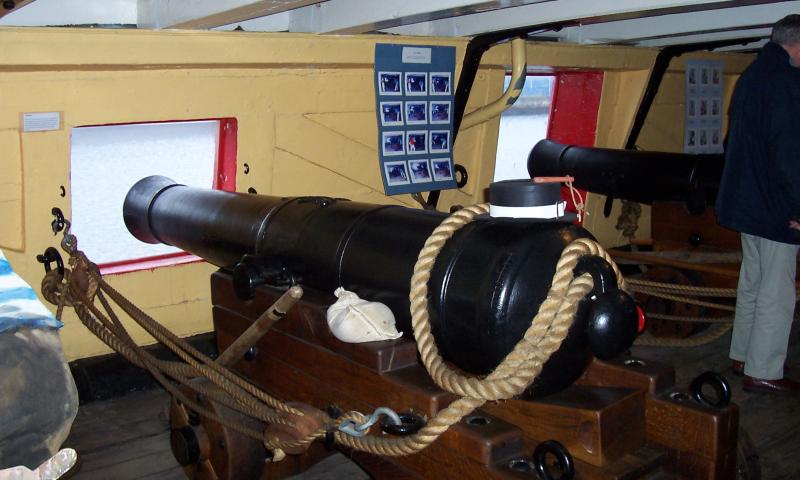 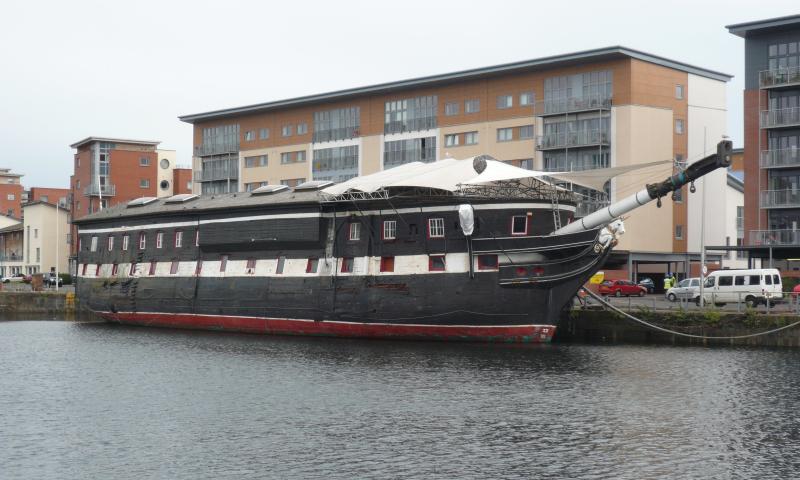 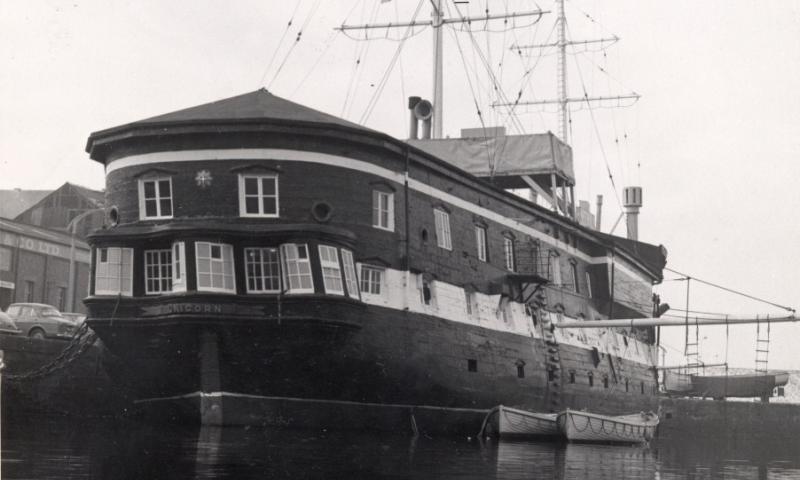 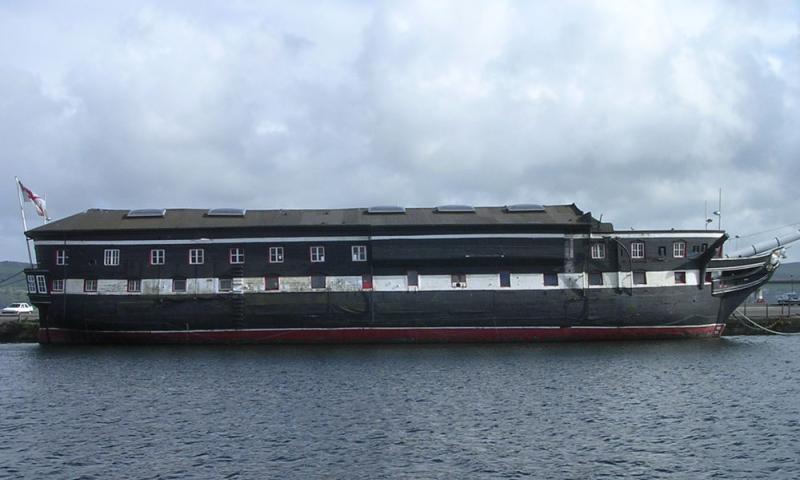 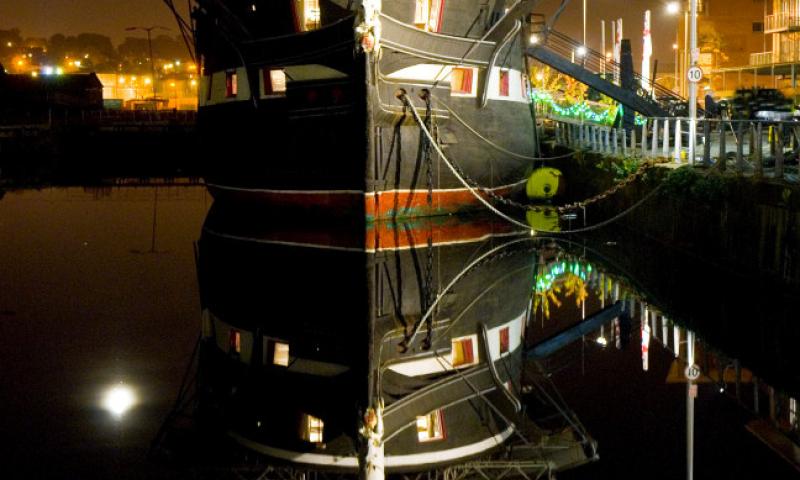 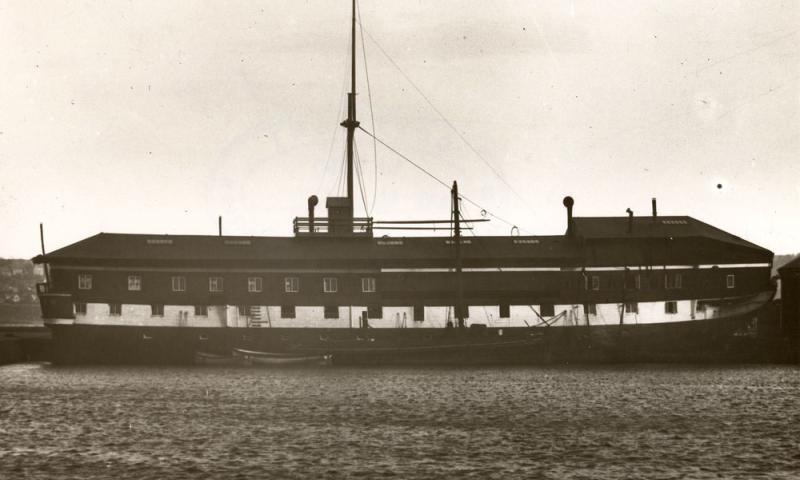 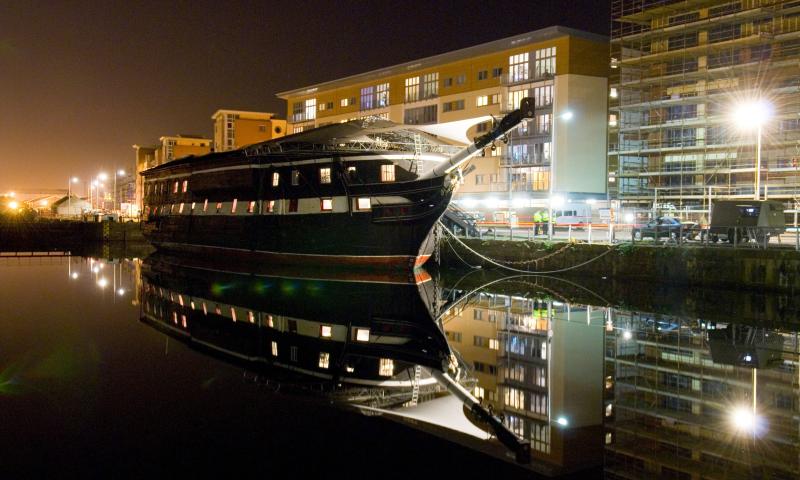 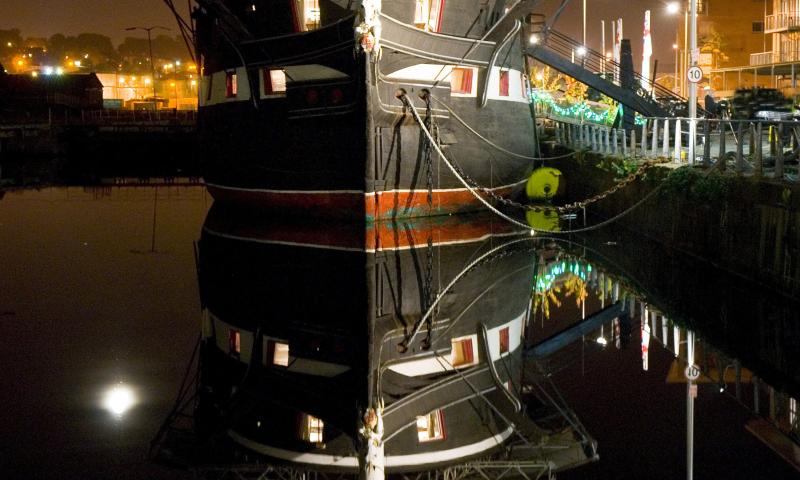 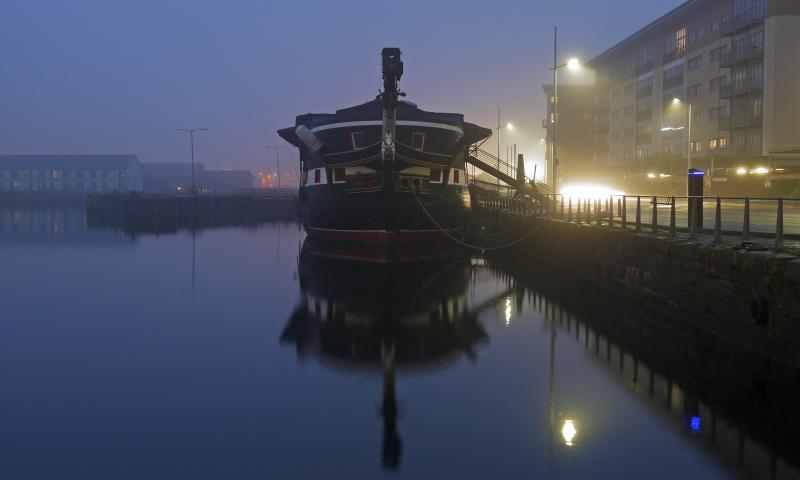 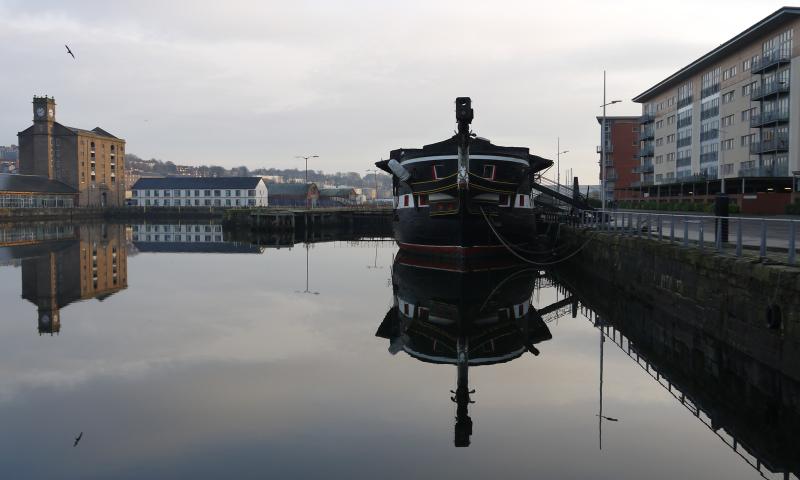 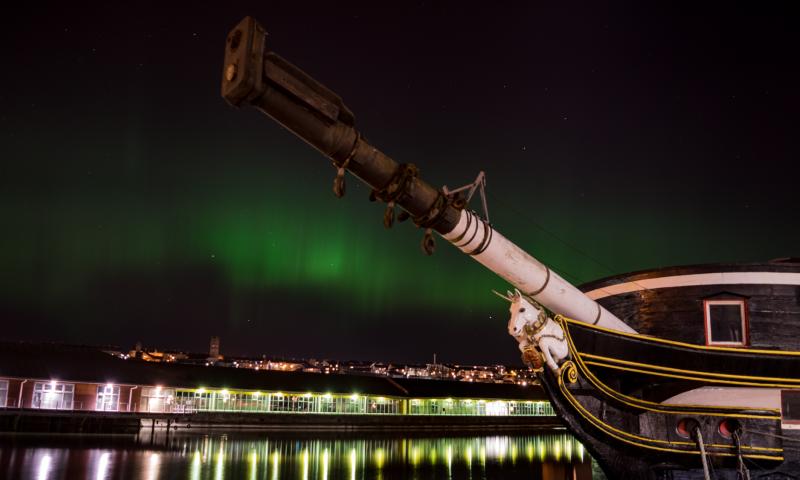 HMS UNICORN was designed as one of the successful LEDA class frigates, whose lines were based on a French frigate HEBE, captured in 1782. Her keel was laid in February 1822 on No. 4 slip in the Royal Dockyard at Chatham and she was launched on 30 March 1824. She was roofed over immediately and laid up in reserve, or 'ordinary', as it was then called and so she remained.

From 1857 to 1862 she was lent to the War Department for use as a powder hulk at Woolwich, and on her return was laid up again at Sheerness. By then the sailing warship had been well and truly outclassed by steam power, but UNICORN's sheltered existence meant that her hull was in excellent condition and she was selected for conversion to a Drill Ship for the Royal Naval Reserve at Dundee.

In November 1873 UNICORN sailed for Dundee in tow of HM Paddle Sloop SALAMANDER and on her arrival she replaced HMS BRILLIANT, who was taken to Inverness and later renamed HMS BRITON. In 1906 UNICORN was taken over by the newly-formed Royal Naval Volunteer Reserve, and when the Reserves were combined after the Second World War she came under the new, unified Royal Naval Reserve. During both World Wars she played an important part as the Area Headquarters of the Senior Naval Officer, Dundee. In 1939 when the First Lord of the Admiralty, Earl Stanhope, was asked to select a name for a new aircraft carrier, he picked UNICORN and the frigate's name was changed to UNICORN II in 1939.

In 1941 she became HMS CRESSY when it was found that having two UNICORNs in the Navy caused confusion with mail and drafting. In 1959, after the aircraft carrier was scrapped, the frigate was renamed HMS UNICORN by Mrs W F Keay. For almost a century, UNICORN had been berthed in the Earl Grey Dock, but in 1961 it was announced that this dock was to be filled in to make way for the new Tay Road Bridge, and it was decided that the ship should be scrapped. At the last moment, Captain Anderson, a former Captain of UNICORN, succeeded in having the decision changed and in 1962 UNICORN was moved down river to a new berth.

1967 saw work started on the Tay Division RNR's new shore headquarters, now HMS CAMPERDOWN, and once again UNICORN's future hung in the balance. Captain Stewart started a move to ensure her permanent preservation, and the outcome was the formation in 1968 of the Unicorn Preservation Society, chaired by Lord Dalhousie. On 26th September 1968, Prince Phillip accepted HMS UNICORN from the Navy on behalf of the newly formed Society. UNICORN has since been relocated to the Victoria Dock, Dundee and an application has been made to the Heritage Lottery Fund for assistance with plans for restoration.

The Unicorn Preservation Society is working to protect and preserve HMS Unicorn for future generations to enjoy this incredible museum and piece of world history.  Since 2014, The Unicorn Preservation Society (UPS) has been working to create a sustainable future for HMS Unicorn, which has led to the development of a major maritime project: Operation Safe Haven. HMS Unicorn will form the centre-piece exhibit of the new Dundee Maritime Heritage Centre, acting as a catalyst as Dundee re-discovers and celebrates its maritime past with the next stage of development of the city’s waterfront. Operation Safe Haven will see Unicorn moved to the dry dock where conservation work will continue.