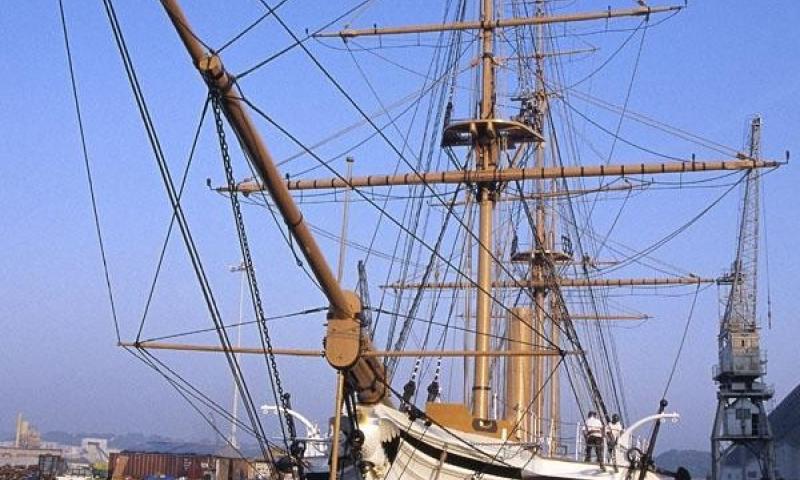 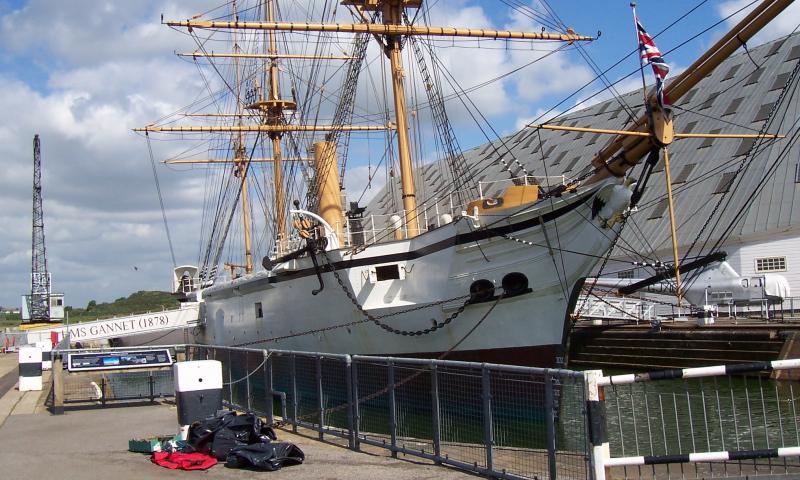 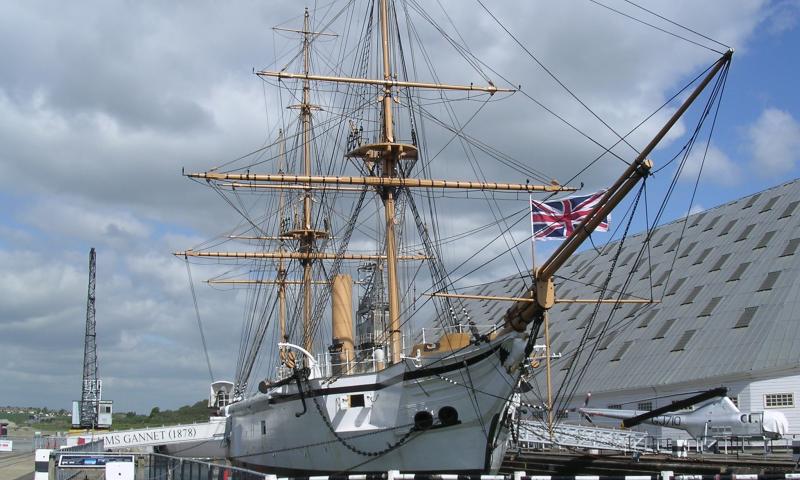 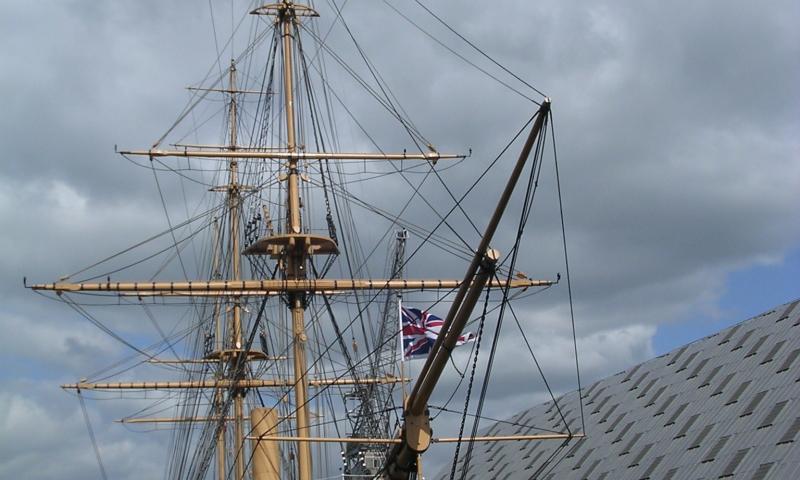 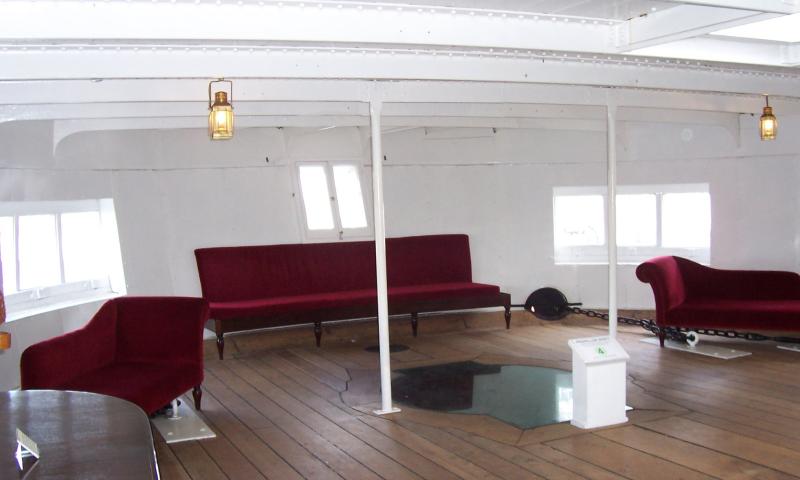 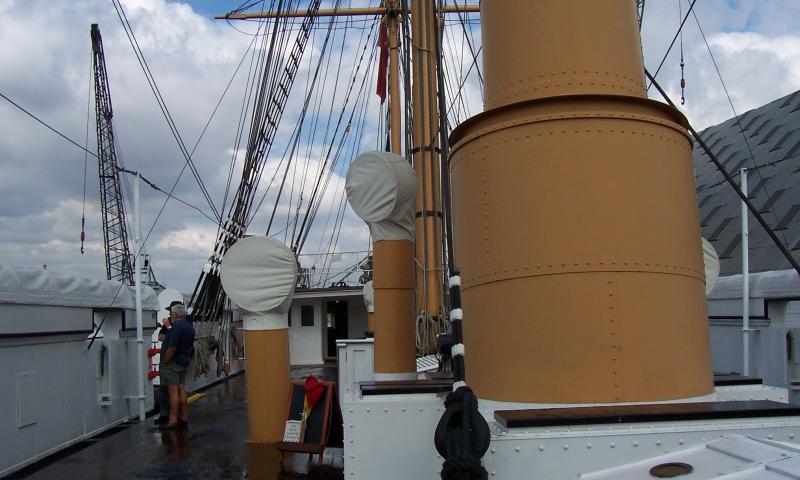 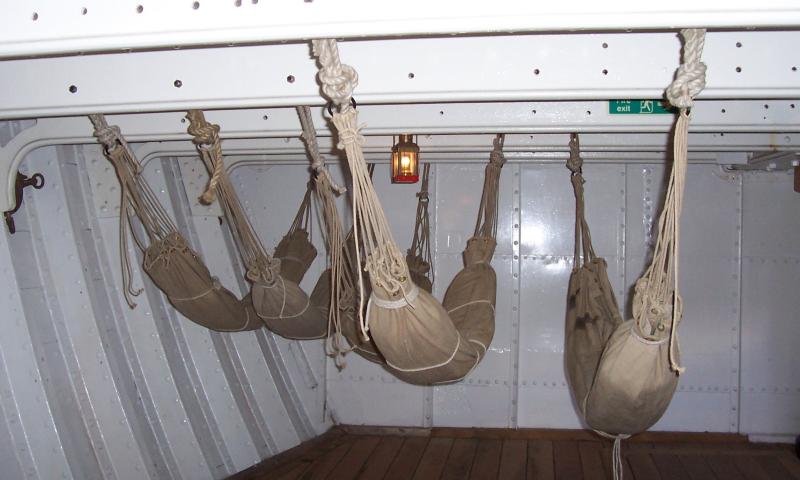 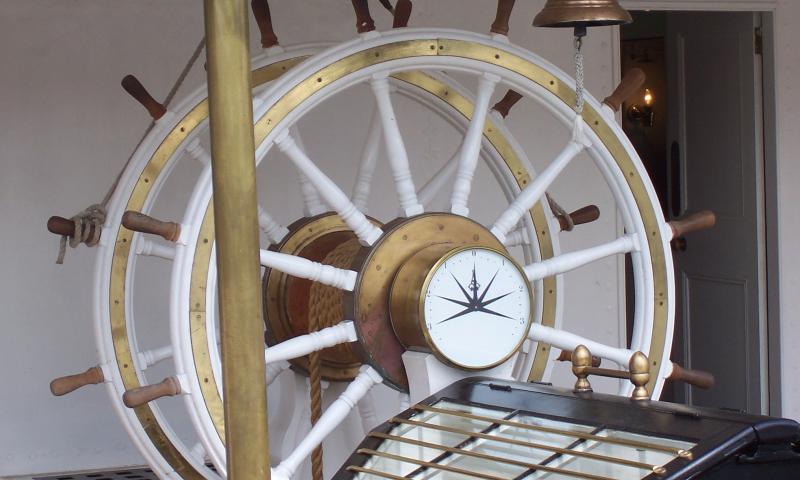 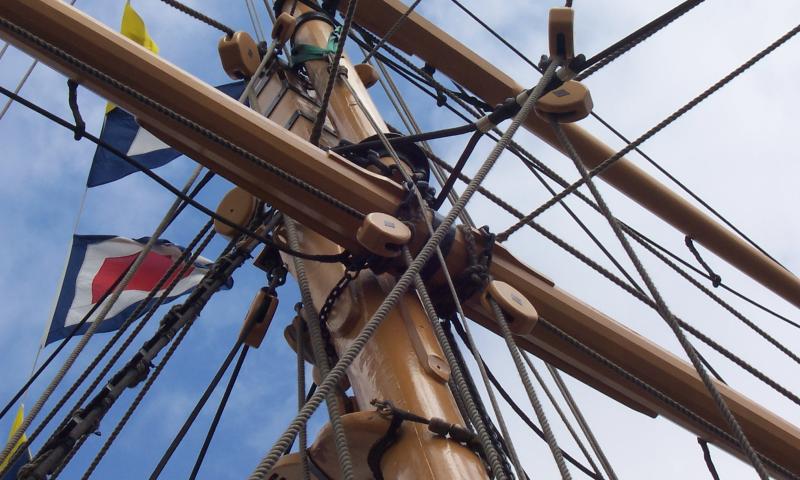 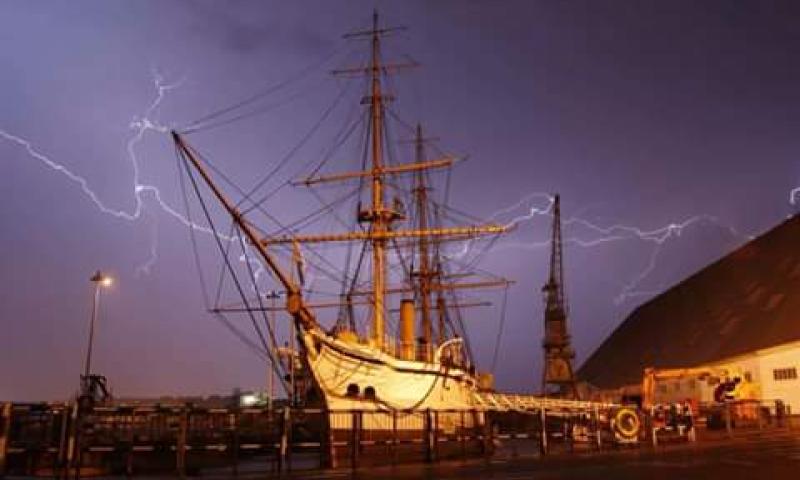 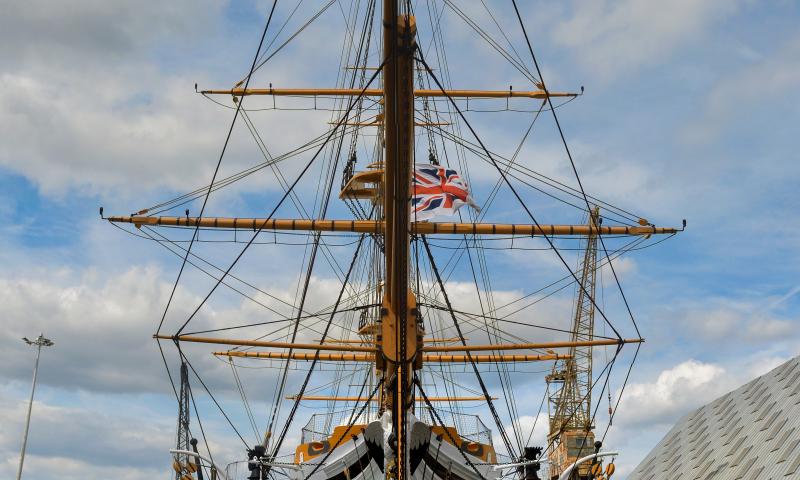 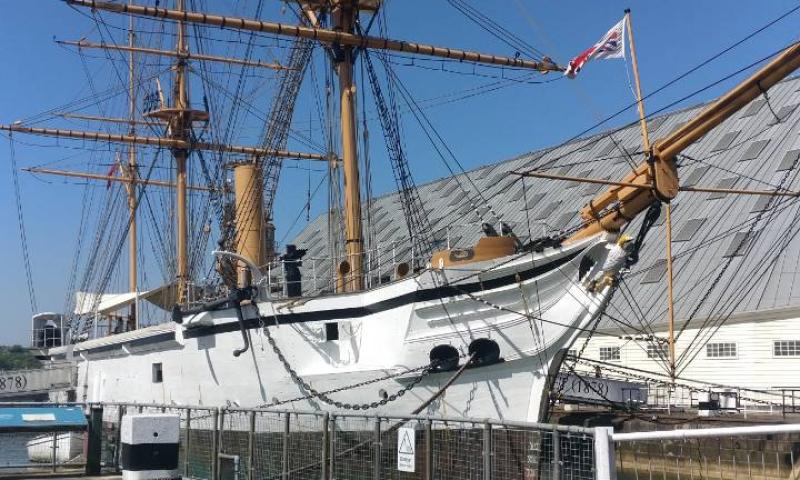 HMS GANNET was one of nine Doterel class sloops built in 1878 for the British Navy. She was barque-rigged with three masts. She was constructed of wood and iron, and had a displacement of 1,130 tons. She was fitted with a Humphreys and Tennant horizontal compound expansion engine of 1,107 hp, giving her a maximum speed of 11.53 knots. She has a single propeller shaft; her 13ft 1 inch diameter propeller could be raised when under sail to make her more stream-lined. Her armament initially consisted of two 7 inch and four 64 pounder rifled muzzle-loaders. The latter were replaced in the 1890s by two 5 inch breech-loaders. Up to six machine guns were added to her armament in the 1880s. In 1902 her distinctive gannet seabird figurehead was removed when she became HMS PRESIDENT.

HMS GANNET was acquired by the Maritime Trust in 1968 who removed the topmost roof at Hardway. When ownership was transferred to Chatham Historic Dockyard Trust in July 1987, she was little more than a hulk, with her mast, guns and some areas of deck all removed.  Conservation work to return her to her 1886 configuration (the only point in her naval career when she saw action) began and the false keel and stem were replaced, along with many rotted, wasted and damaged half timbers, although only minor repairs to the original iron framing and teak planking below the main deck were needed. Partial replacement of the copper sheathing has also been carried out. A new figurehead was carved and fitted, and a 4 ton, 69ft long fore-mast was put in place on Trafalgar Day, 1993. Subsequently a 29ft bowsprit has been fitted, the Commander’s Cabin and other areas of crew accommodation have been recreated, and the vessel has been fully re-masted and re-rigged. The fo’c’s’le, breakwater, bulkhead and forward firing gunposts have also all been fully re-instated on board. In 2011 a new 70ft lower foremast, in two sections and made up from some 200 pieces of kiln-dried Douglas Fir, was rigged up and fitted.

HMS GANNET is of national significance as the last surviving small ship of Queen Victoria’s Navy. As an Osprey/Doterel class sloop she is highly representative of the large number of Royal Navy vessels used to police the waters of the British Empire, and to protect British trade and interests worldwide.  With a complement of 140 officers and ratings, GANNET was built for overseas work giving her international significance.  Her first commission was to the Pacific station where she was on patrol for five years, sailing over 60,000 miles, monitoring the ‘nitrate’ war between Chile and the Peru-Bolivia Alliance, and being present when the Peruvians scuttled their own fleet to prevent it falling into enemy hands. She then moved to the Mediterranean fleet, taking part in the defence of the port of Suakin on the Red Sea in support of General Gordon’s army in Sudan before going on to carry out survey and hydrographic work.

After being decommissioned in 1895, HMS GANNET took on her next significant identity having been converted into a drill ship. She served as HMS PRESIDENT, the headquarters of the London Division of the Royal Naval Reserve, until 1911, when she was offered to the then Captain Superintendent, C B Fry, but she was not delivered to the Hamble River until June 1914  for use as a training ship for boys seeking a career in the Royal Navy or merchant service. In 1913 Sir Winston Churchill, as Lord of the Admiralty, agreed to loan her to Mr C B Fry (the cricketer) as a dormitory for about 100 boys for the Training Ship MERCURY, recognising the need for well-trained Advanced Class Seamen.  The training school MERCURY was successful in producing high quality recruits for the Navy for over 80 years and GANNET remained there until 1968.

HMS GANNET is a striking and graceful vessel and, whilst no longer operational, can be seen preserved afloat in Number 3 dry dock at Chatham Historic Dockyard, close to the place where she was built, on the River Medway at Sheerness in 1878.  Her composite construction with stout teak planking on a strong iron frame made her fit for ocean sailing and overseas commissions where she would be based away from the UK for long periods of time.  Powered by both sail and steam, she had the capacity for lengthy passages, whilst still being manoeuvrable in action and appropriately armed for her patrol work.

Built on the River Medway at Sheerness in 1878, HMS GANNET represents the heyday of the Victorian Navy and its worldwide role to police the waters of the British Empire. Between 1878 and 1895 she saw service in the Pacific, the Mediterranean and the Red Sea. In 1886 she saw action in defending the port of Suakin against rebel forces during the Sudanese revolt. In 1895 GANNET was decommissioned and in 1902 converted into a drill ship for the Royal Naval Reserve.

She served as HMS PRESIDENT, the headquarters of the London Divisions RNR, until 1911. In 1913 she was lent to the boys’ sea training school, TS MERCURY, on the River Hamble, for use as a dormitory ship. The school closed in 1968, and the GANNET and the ship was not removed from the River Hamble until 1970 when she was subsequently acquired from the Admiralty by the Maritime Trust in 1971.  The Trust removed the topmost roof at Hardway.