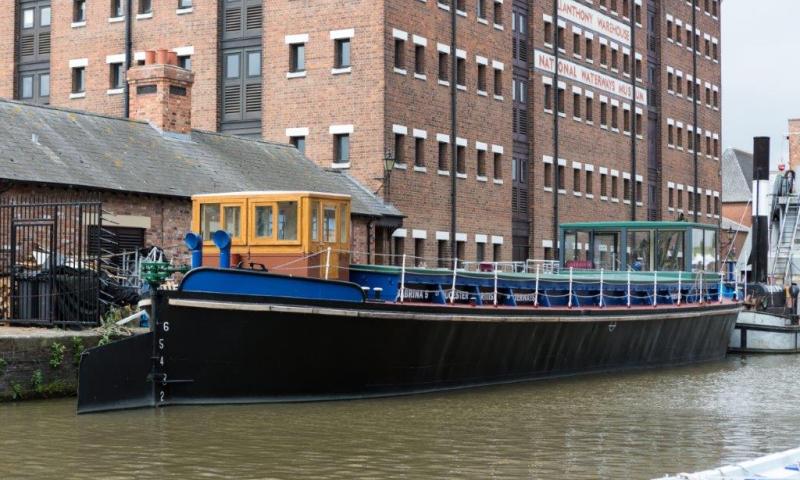 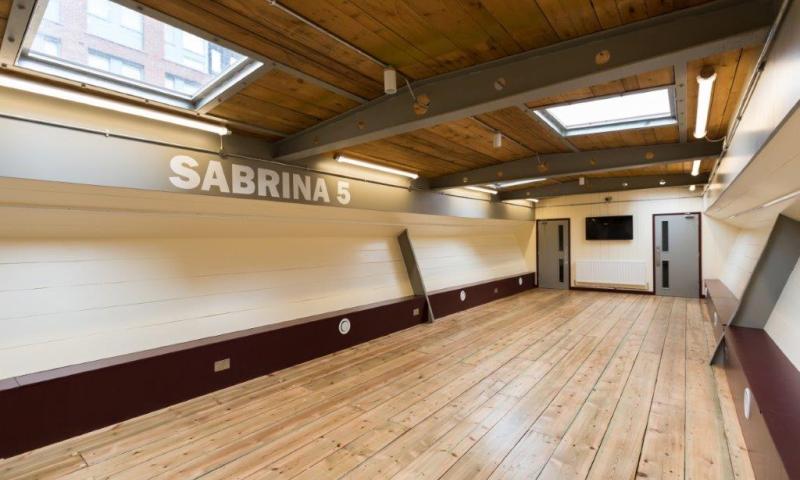 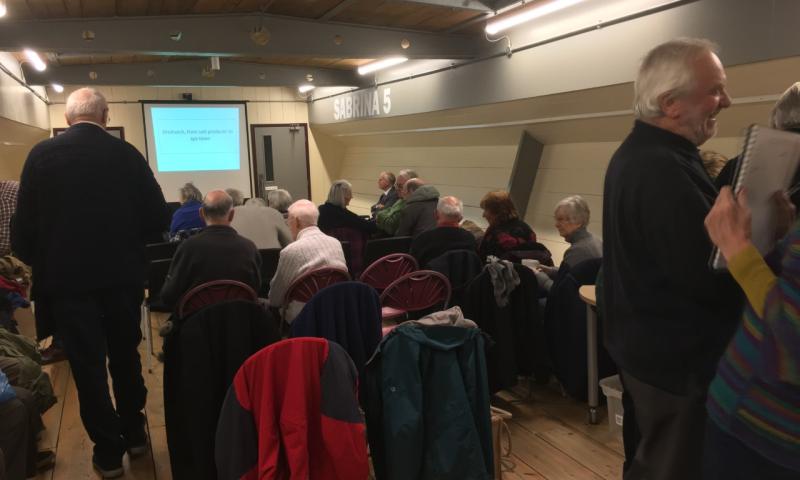 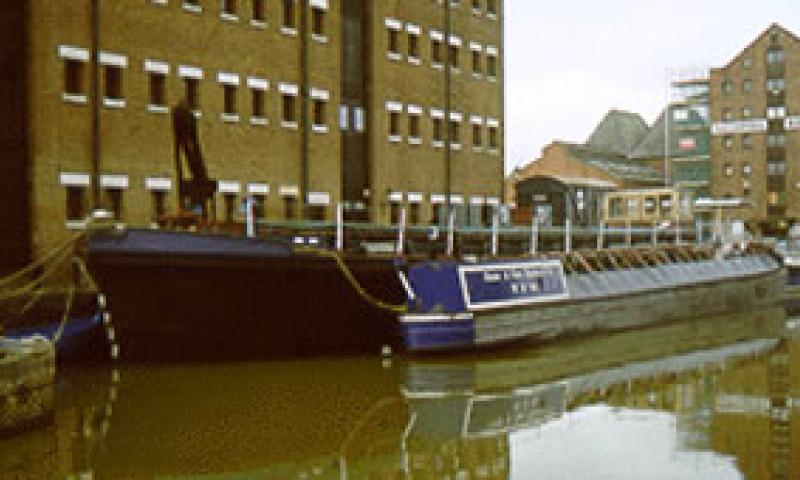 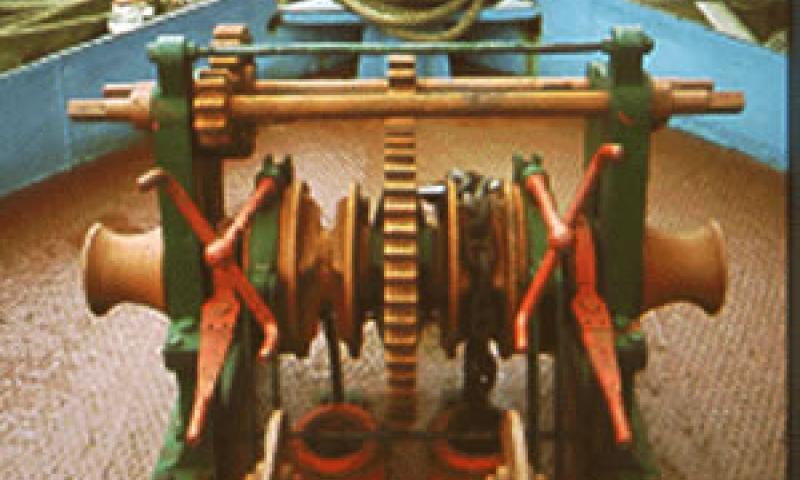 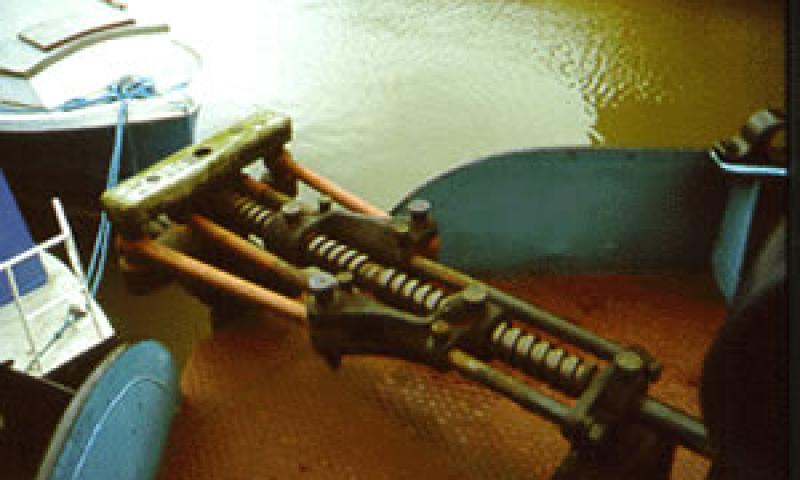 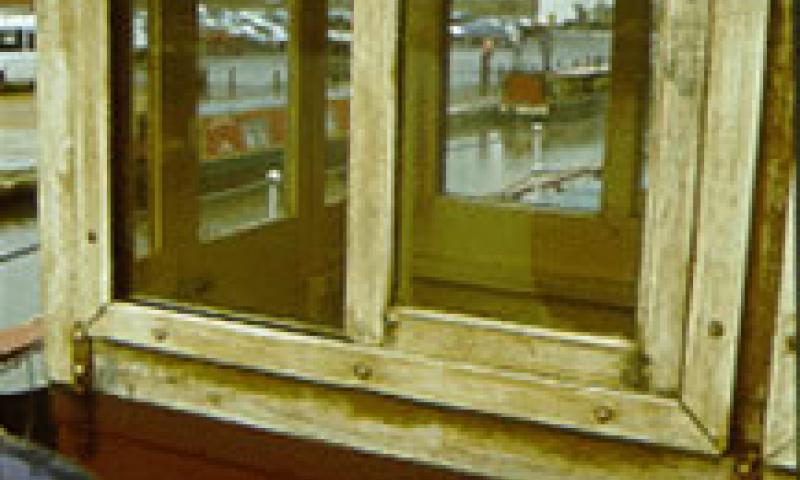 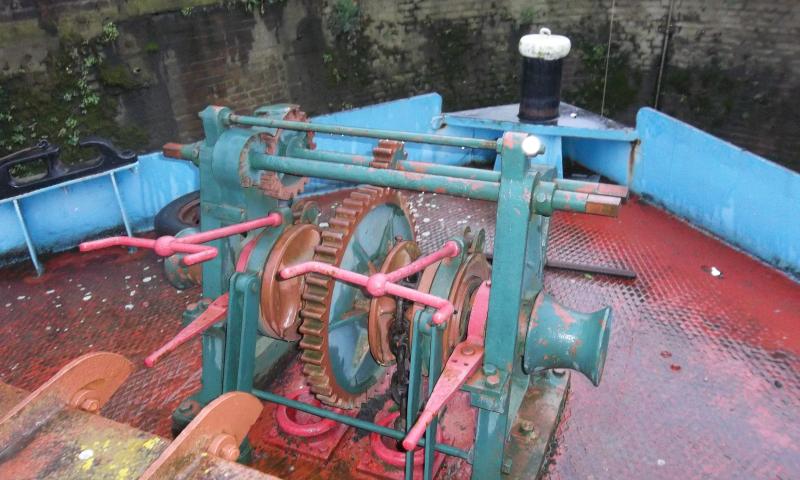 As a 90 foot long unpowered barge, SABRINA 5 was built to be towed by a tug with the ability to distribute cargo quickly inland.  Her steel hull has a large hold, covered by longitudinal hatch-boards supported on four rolling frames which can be pushed easily along to the end of the hatch opening to facilitate loading of large items.  The boards are covered by waterproof tarpaulins, which would have been strapped in place by the crew after loading.  SABRINA 5 retains the stanchions and chains along her side decks which could be folded down during the loading or unloading process.  She also has two latches at the top of her rudder post which could be disengaged when the vessel was moored to prevent damage to the steering mechanism if knocked by another craft.

SABRINA 5 was built by Charles Hill & Son of Bristol in 1944 for the Ministry of War Transport and played a vital role distributing essential supplies brought into Avonmouth by the Atlantic Convoys.  After nationalisation in 1948, SABRINA 5 became part of the British Waterways fleet, carrying cargoes such as copper, zinc, steel, aluminium, or wheat, cheese, cocoa beans and tinned tomatoes.  Following the development of road transport, the barge fleet was disbanded in 1969 and SABRINA 5 became an exhibit at the National Waterways Museum, Gloucester Docks in 1988.

SABRINA 5 has a large hold space which was built to accommodate 130 to 150 tons of cargo.  As a vessel built for a functional purpose, she had only a small and basic cabin aft under the wheelhouse for the crew, fitted with bunks and two ventilators. Her wheelhouse was designed to be taken down as required to give the necessary clearance for low bridges.  The light roof made of plywood and covered with canvas could be lifted off and the upper parts folded down by simply undoing four butterfly nuts.

SABRINA 5 was one of six un-powered barges built in 1944 by Charles Hill & Sons of Bristol for the Ministry of War Transport.  During the war, many ships were diverted from London to the west coast ports, and barges were needed to distribute the cargoes quickly.  Initially they were managed by the Severn & Canal Carrying Co. and after nationalisation in 1948, they were operated by what became British Waterways.  Towed everywhere by tugs, the barges were mainly used for carrying 130 to 150 tons of imports from Avonmouth to Worcester or Stourport via the Gloucester & Sharpness Canal and the River Severn.

Each barge was crewed by two men, who shared a cabin in the stern under the wheelhouse.  The principal cargoes were metals such as copper, zinc, steel and aluminium, and foodstuffs such as wheat, cheese, cocoa beans and tinned tomatoes.  Dried fruit was fumigated while on board to kill off any parasites. Occasionally there was an outward cargo, and some trips were made to other ports in the Bristol Channel, but these were rare.

The hold is covered by longitudinal hatch-boards supported on four rolling frames.  When loading and unloading, these frames can be pushed along to the end of the hatch opening to allow large items to be handled easily.  The boards are covered by waterproof tarpaulins that are held in place by battens and wedges around the hatch combing, and strings are lashed over the top to stop the tarpaulins lifting.

On one trip, in 1949, SABRINA 5 was driven ashore west of Portishead when a tow-rope parted in a gale.  The crew had to hang on for dear life as the barge crashed into the rocks several times before settling down and they had to remain in their wheelhouse with waves breaking over them for about an hour before helpers appeared on the shore.  Then lines were thrown to the helpers, and the men were able to scramble over the rocks through the breaking waves to safety.   SABRINA 5 was re-floated on the following day.  In the 1960s, the barge traffic to the Midlands was adversely affected by the growing use of containers and lorries, and the barge fleet was formally disbanded in 1969, although some movements continued into the early 1970s.  After several years of idleness, SABRINA 5 was restored at R W Davis & Son's yard at Saul, and in 1988 she became an exhibit at the National Waterways Museum in Gloucester Docks.  In 2004, she was given a new role, as access ways were installed so that her hold could be used as a performance area with seating for up to 90 people.

After a career carrying cargo she's now a floating education, exhibition and meeting space for the National Waterways Museum, Gloucester.  The transformation was carried out by the Canal & River Trust (the charity that runs the museum) by Gloucester boat builder T Nielson & Co.  SABRINA 5 is one of the largest vessels in the museum's collection and by giving careful consideration to her conservation, many original features have been maintained, including original timber floors and ceiling.  Steel beams may have swapped a functional role for a decorative one, but they remind visitors that this is a former working vessel.