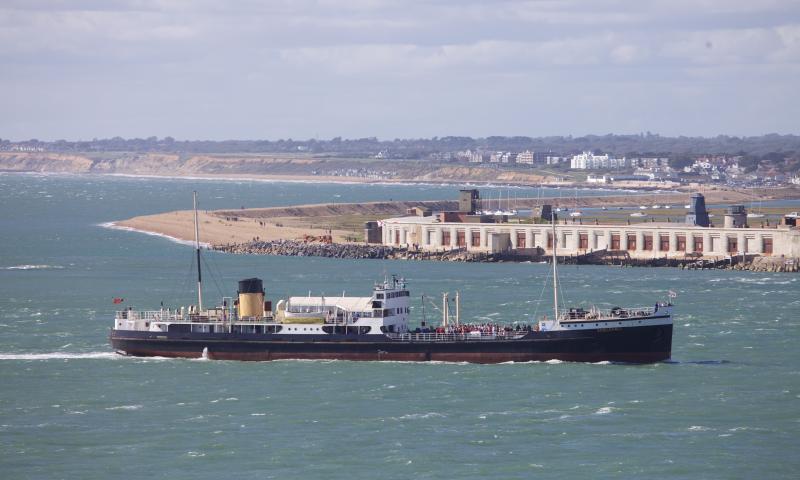 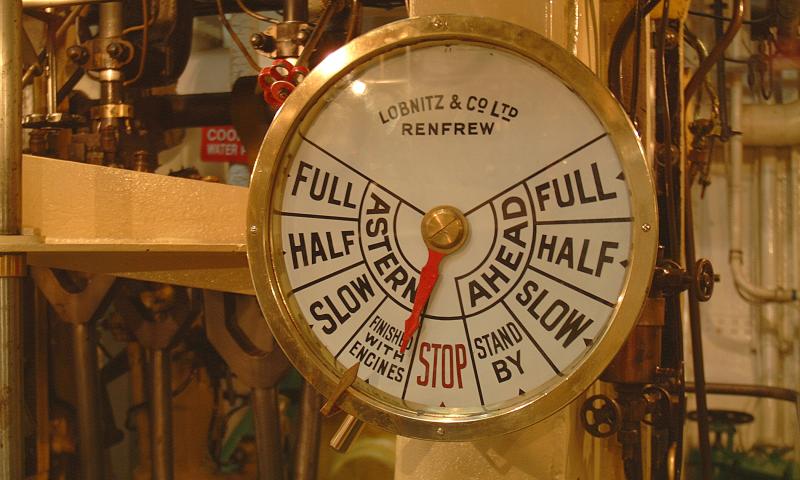 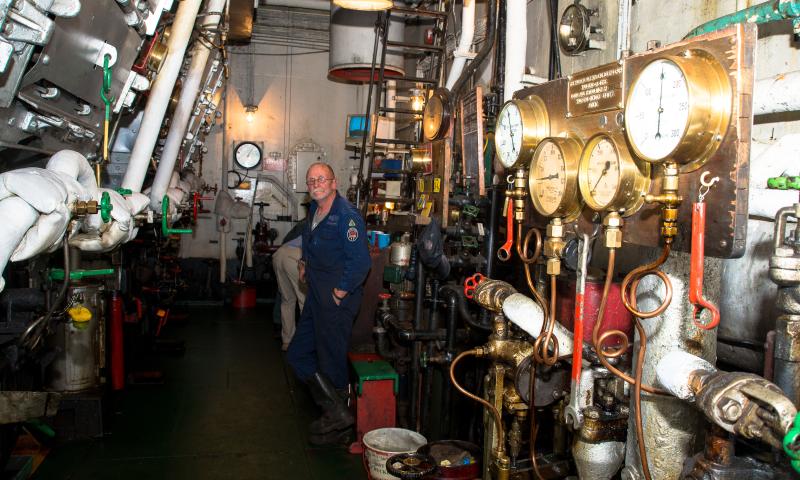 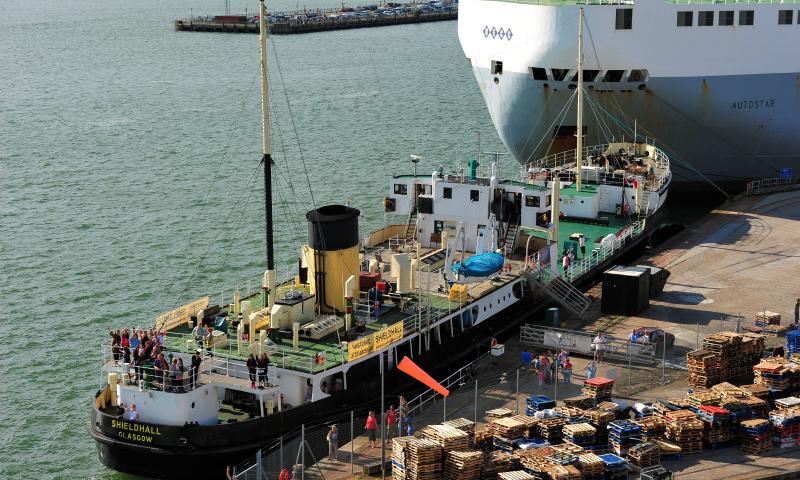 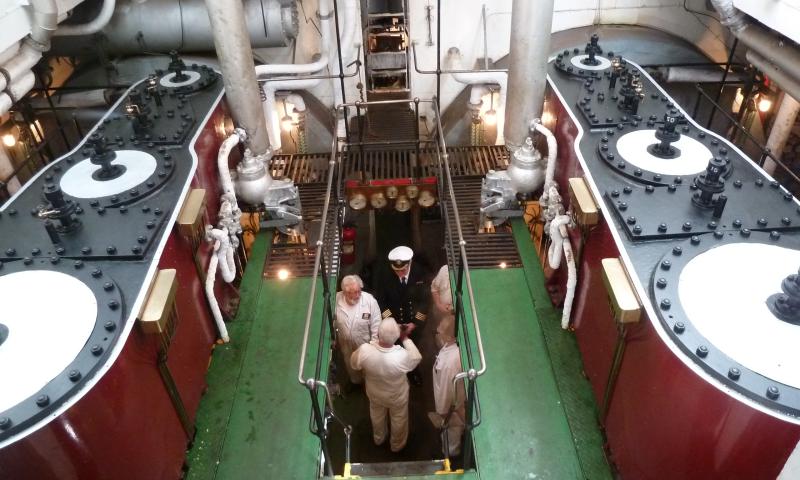 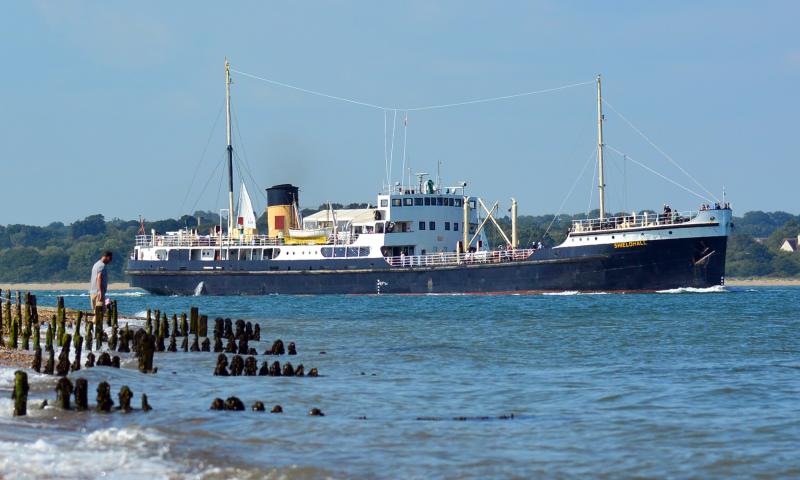 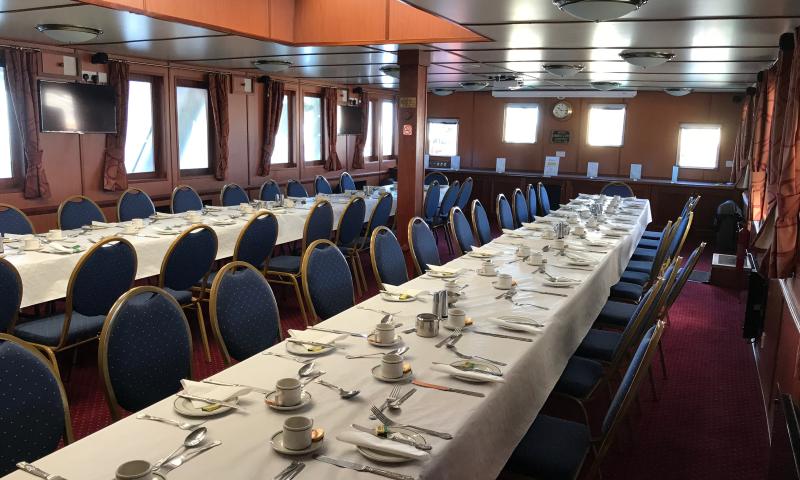 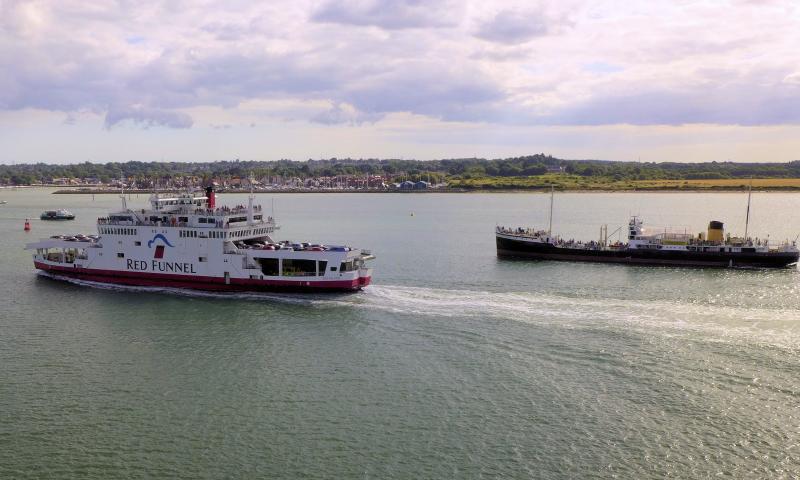 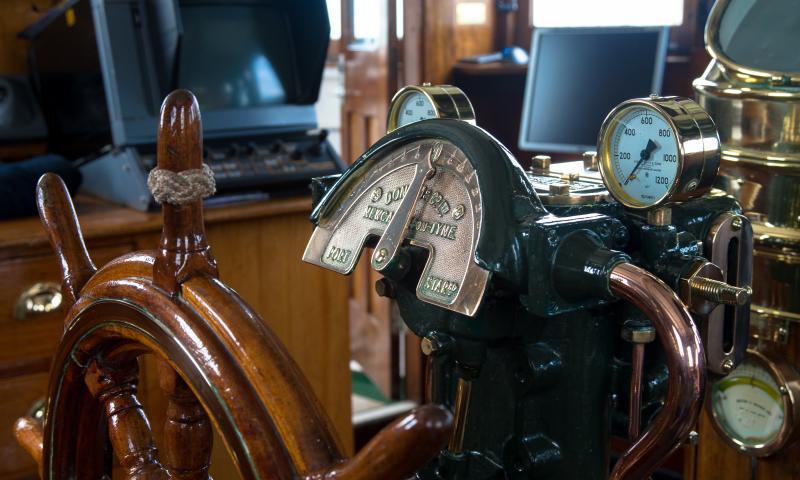 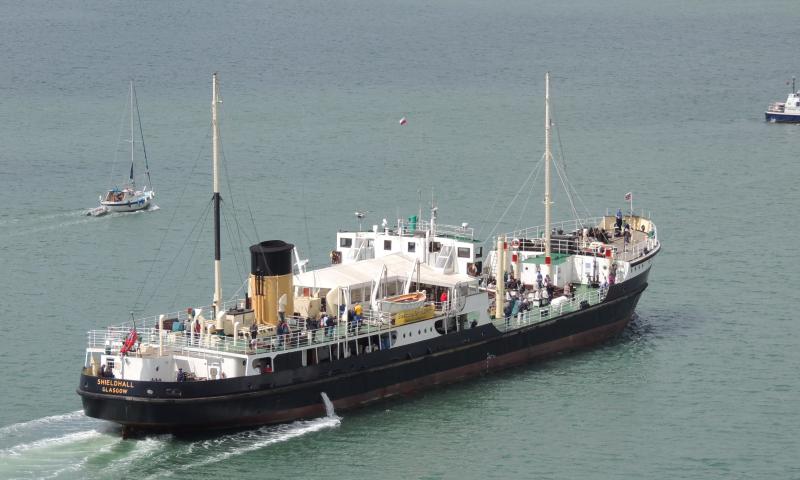 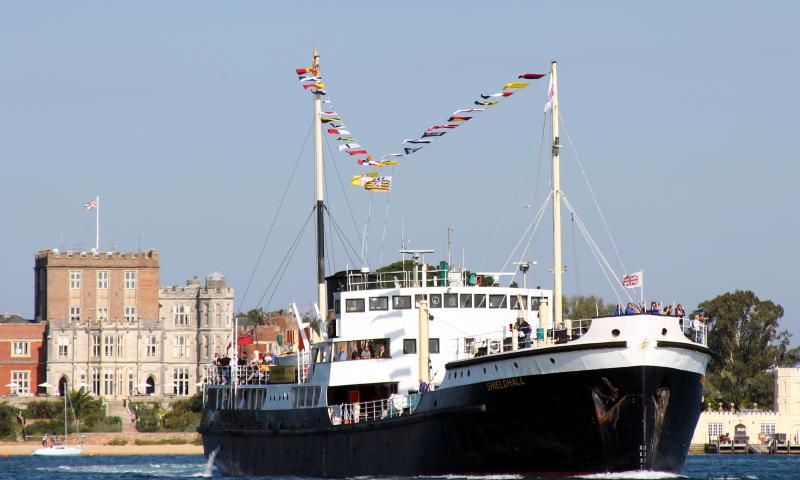 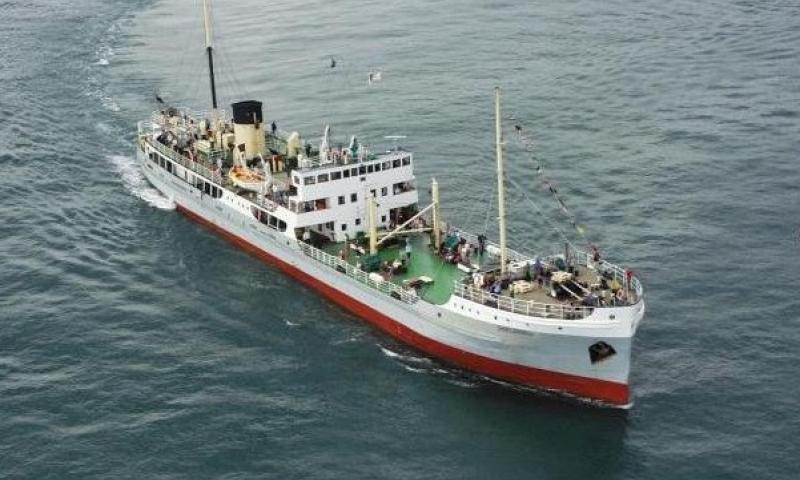 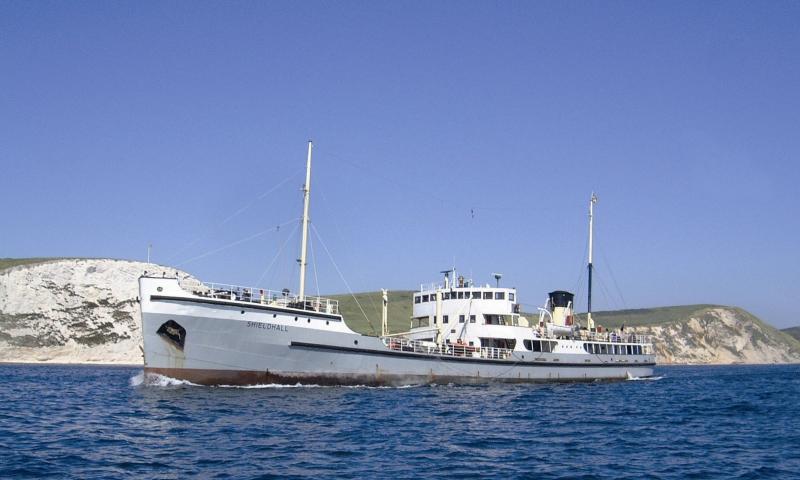 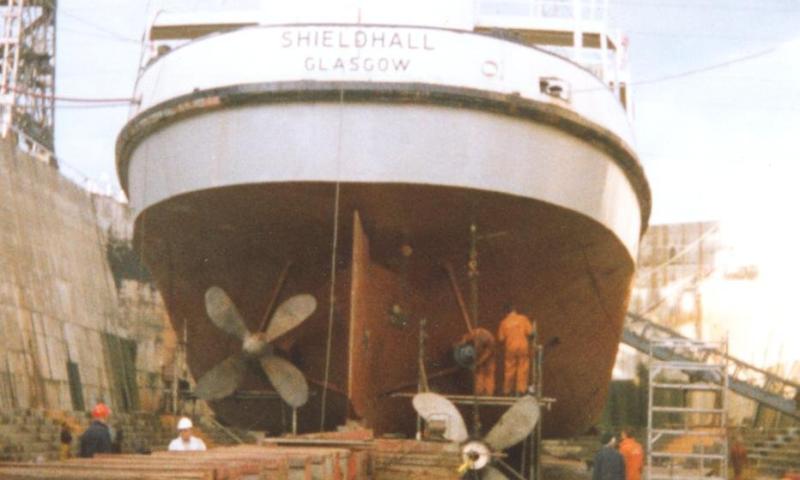 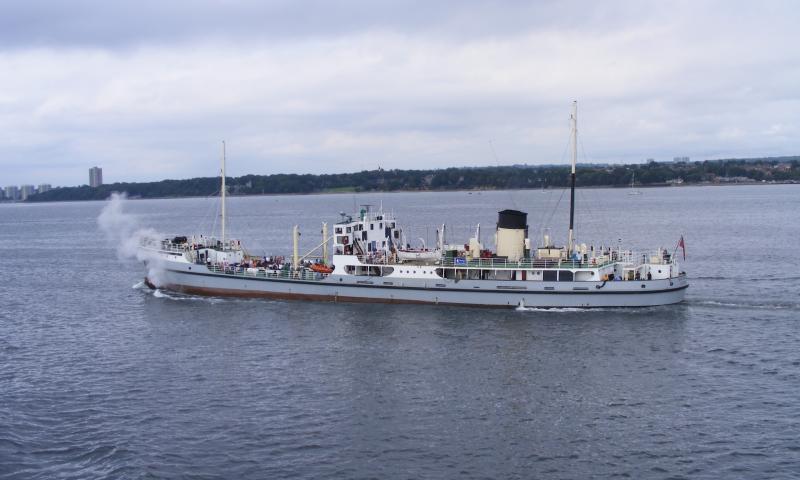 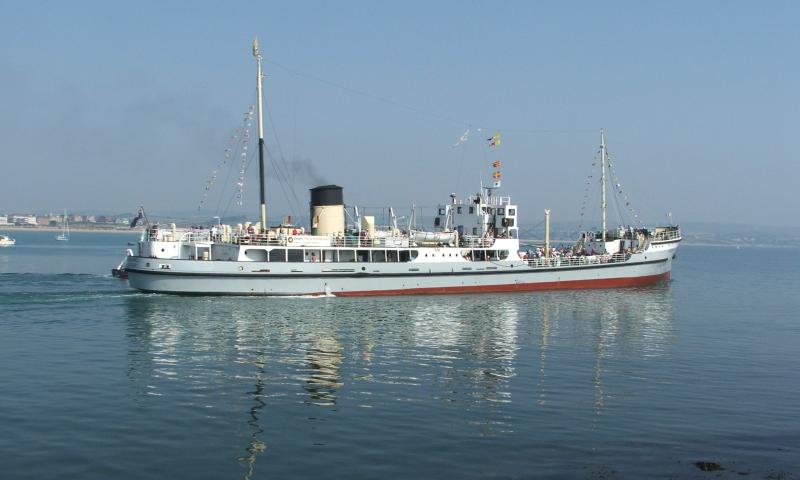 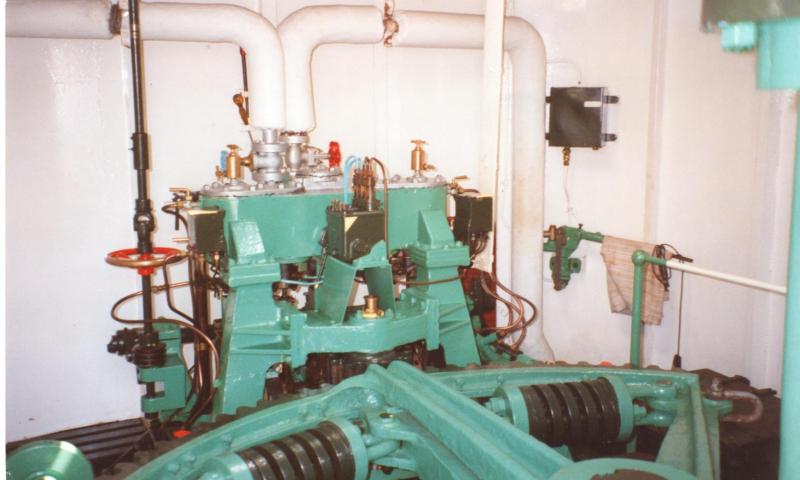 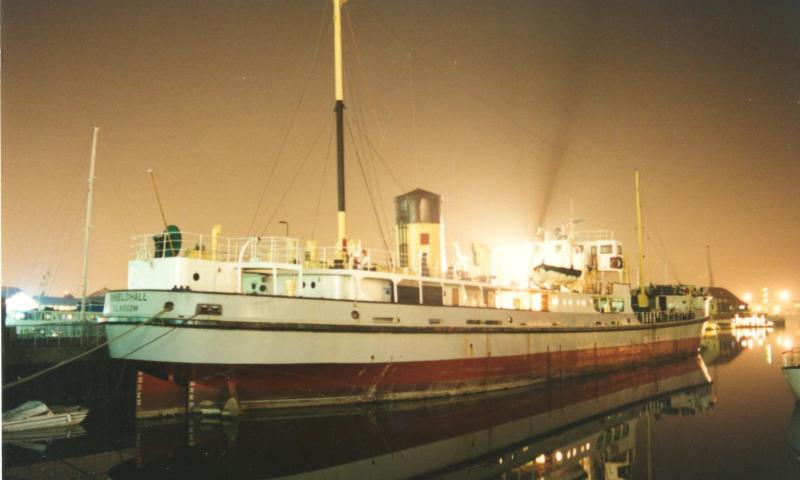 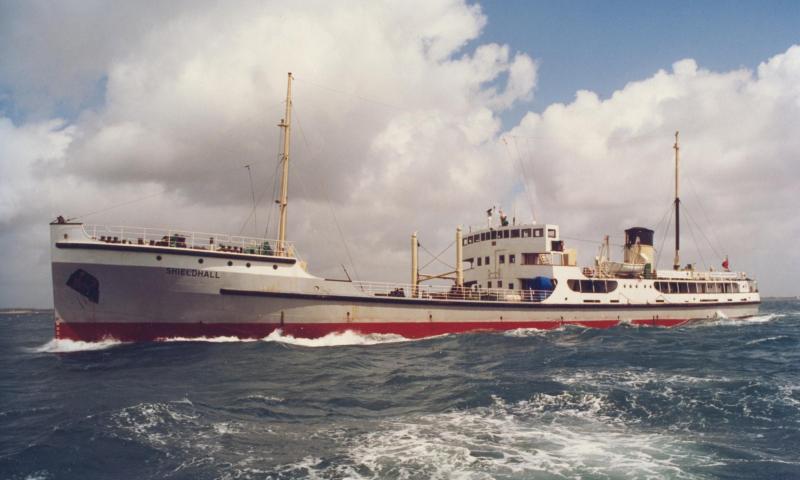 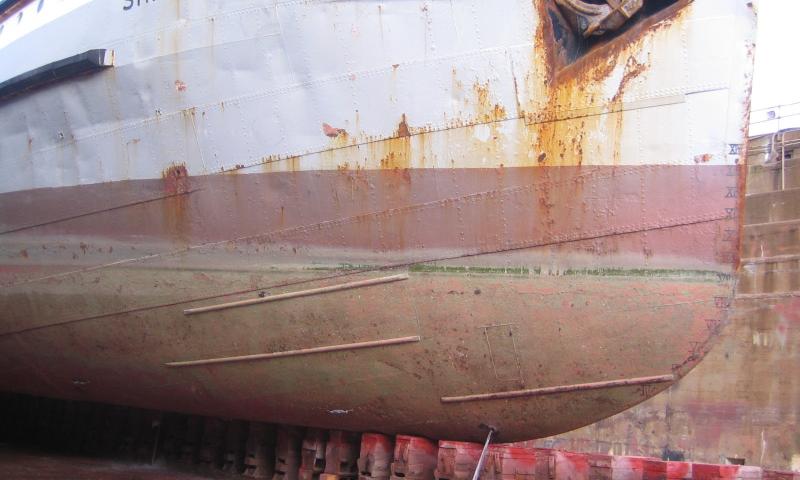 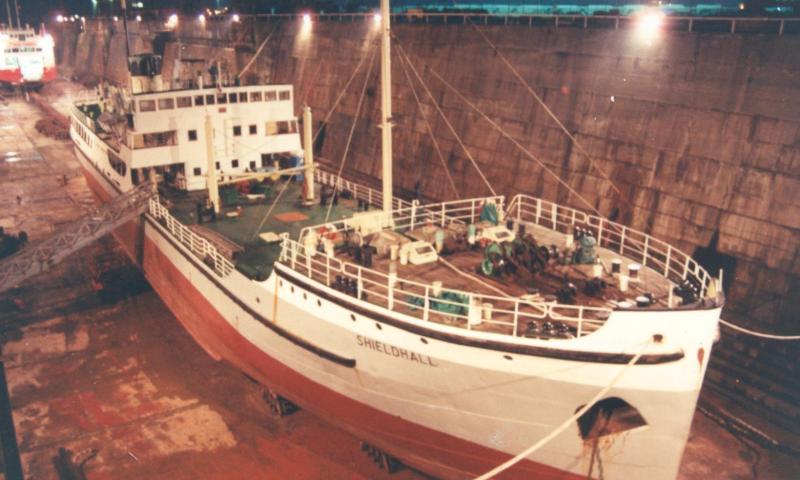 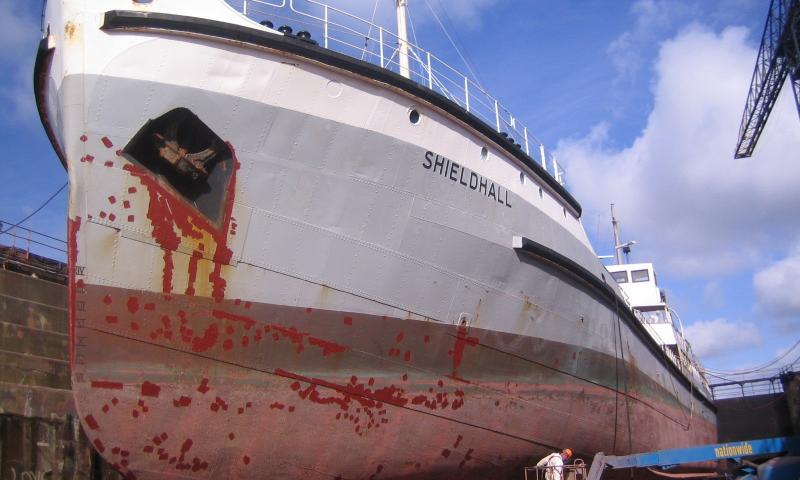 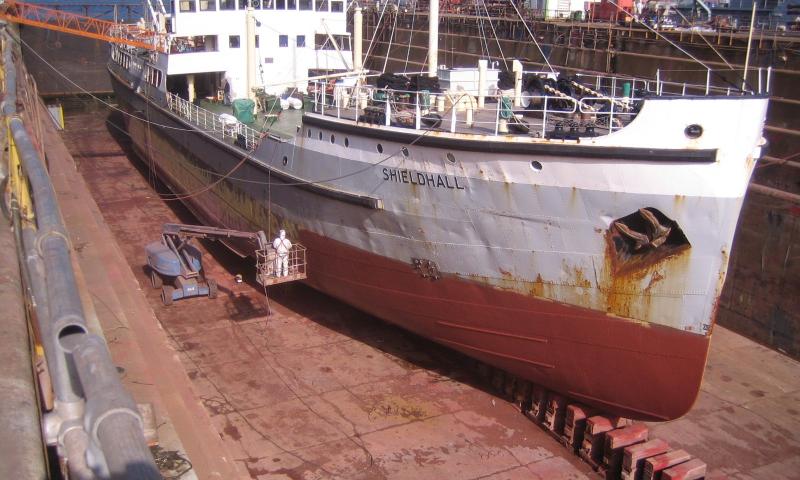 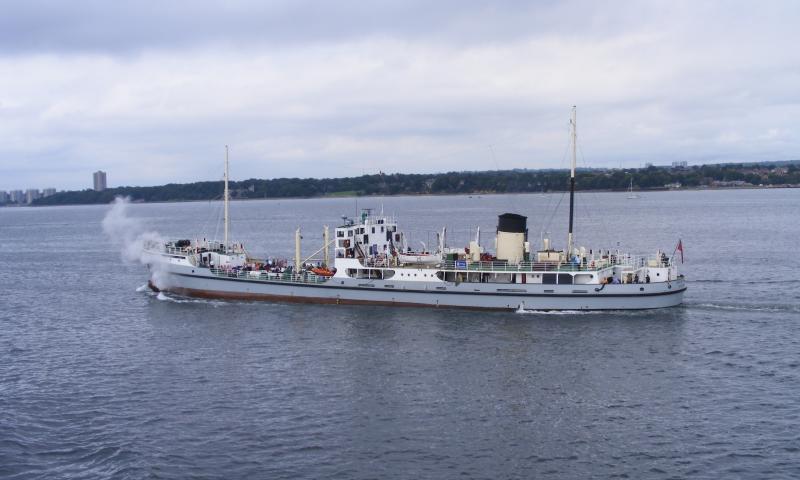 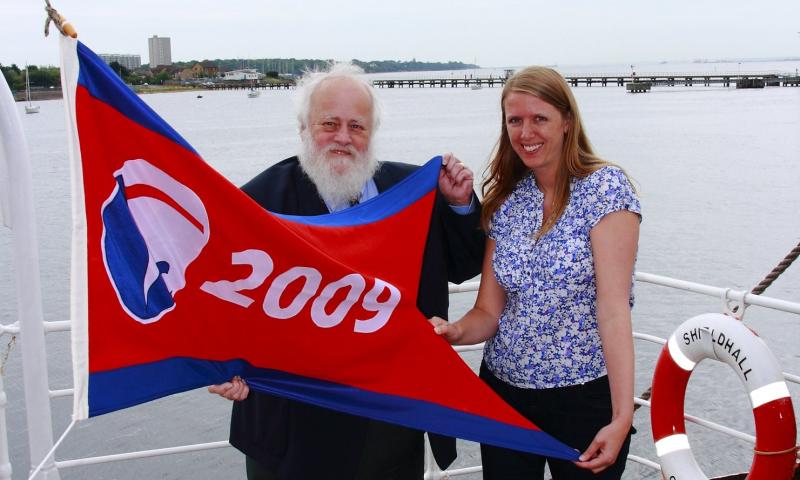 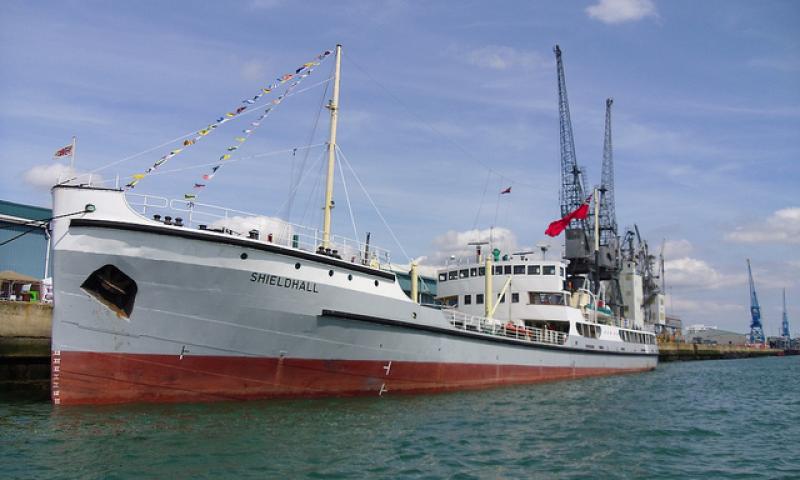 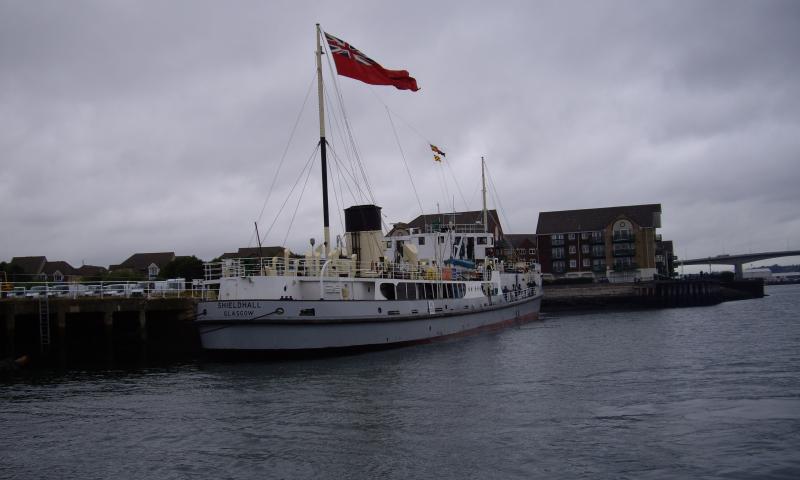 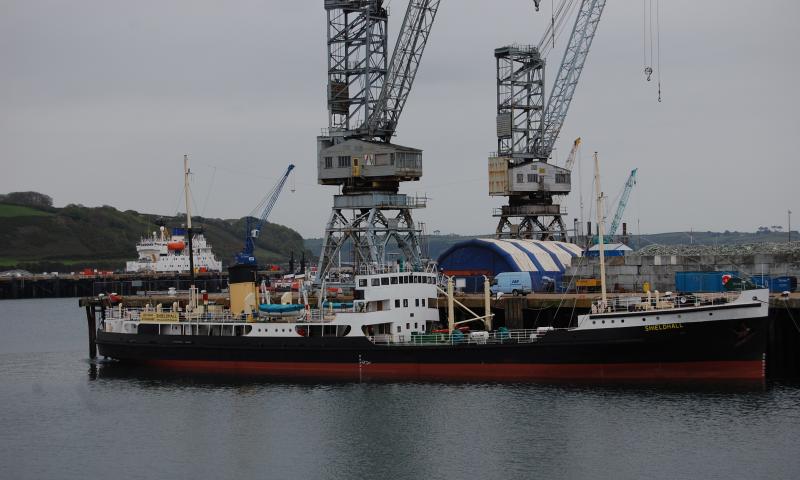 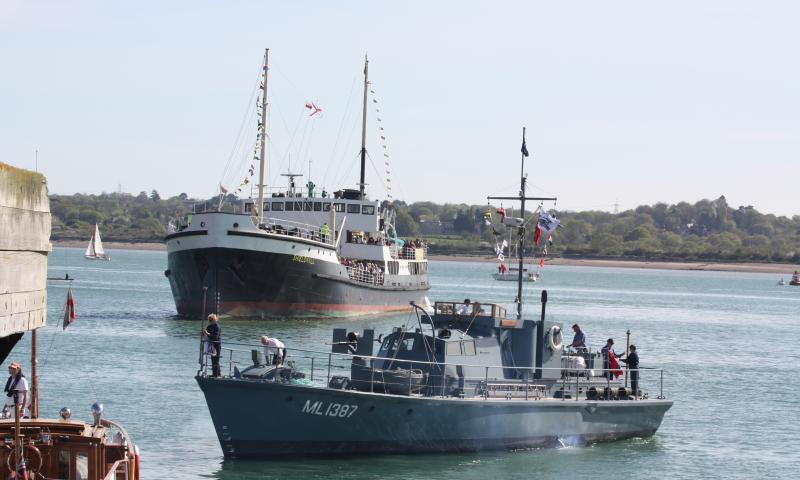 Completed in 1955 SS SHIELDHALL was built to transport sewage sludge from Glasgow to the limits of the Clyde estuary where it was discharged. She was also used by Glasgow Corporation for river inspections and official engagements. Her design and construction reflect these divergent functions, with the sludge tanks and discharge equipment surviving intact, as does the fine, large, wood-panelled saloon where civic receptions, other formal functions, and passengers were hosted and entertained. SHIELDHALL's hull and superstructure are a mix of riveted and welded construction incorporating a traditional bridge and wheel-house amidships, a straight stem, and cruiser stern. Her oil-fired boilers and triple expansion steam engines are original, with the latter of similar configuration (though smaller) to those on much earlier vessels such as RMS TITANIC. The steam-powered auxiliary machinery is also original. Overall SHIELDHALL is substantially intact from the time when she was built whilst being highly evocative of pre-Second World war steamships in style and features.

SS SHIELDHALL was a notable feature on the Clyde enjoying strong links with the people of Glasgow. In addition to her official/civic functions she was regularly used to carry up to 80 passengers (many of them children, disadvantaged families, and wounded or recuperating servicemen) on day trips along the river and out into the estuary. Her associations with the Solent stem from her service between 1977 and 1985 carrying sewage sludge from Marchwood, Millbrook and Woolston to an area to the south of the Isle of Wight where her cargo would be discharged. With a gross tonnage of 1,792 tons and a length of 268.00 feet overall, SHIELDHALL is the largest operational steam vessel in Europe, undertaking a regular programme of passenger trips and participating in events along the south coast of England and ports in France and the Netherlands. The volunteer society which owns and operates her is also developing her potential as a training vessel for aspiring engineers. Her significance is reflected in her status on the National Register of Historic Vessels as one of only 200 in the National Historic Fleet of the United Kingdom. In 2009 she was accorded the accolade of being the first UK Historic Flagship of the Year.

SS SHIELDHALL features a large-volume hull to accommodate the sewage tanks. Her straight stem and full bows contribute to achieving maximum capacity within the overall dimensions of the ship, whilst the cruiser stern brings an element of elegance to her workaday hull-form. The opulent saloon reflects her passenger-carrying role whilst open decks provide both working spaces and areas where passengers can congregate. The galley, crew cabins, and wash facilities installed for overnight operations are original to the build date.

SS SHIELDHALL was built for Glasgow Corporation as a sludge disposal vessel replacing an older namesake. She spent her working days moving treated sewage sludge from Shieldhall and Dalmuir down the River Clyde for disposal in the deeper waters around Garroch Head. These vessels had a long tradition of passenger carrying going back to the First World War when they used to take soldiers convalescing from their injuries on their runs to sea. Since that time all the ships, including SHIELDHALL, were fitted with comfortable accommodation and trips were provided mainly for disadvantaged people who otherwise would not have experienced a trip in a pleasure steamer. They were kept spotlessly clean with no trace of their humble task. SHIELDHALL was built on classic lines with a riveted and welded construction, a straight stem, cruiser stern and a traditional wheelhouse. She is fitted with two Scotch Boilers providing saturated steam to two triple expansion engines driving twin screws. Normal operating speed was 9 knots with a maximum of 13 knots. She entered service in 1955 and operated on the Clyde until 1976 when she was replaced by the motorship SS GARROCH HEAD and laid up. In 1977 she was purchased by Southern Water Authority to carry sludge from Southampton for disposal in an area south of the Isle of Wight. In 1985, the rising cost of fuel made her uneconomical to run and she was withdrawn from service and again laid up. As a result of an initiative by the Southampton City Museum, a preservation society, The Solent Steam Packet Ltd, was formed and, in 1988, SHIELDHALL was purchased for £20K. All work on the ship was carried out by unpaid volunteers and much has been done to bring her up to and keep her in seagoing condition. In 2006, SHIELDHALL was awarded a grant of £275500 by the Heritage Lottery Fund to continue restoration and contribute towards extending her seagoing life by enabling her to remain fully operational and renewing the passenger carrying certificate.