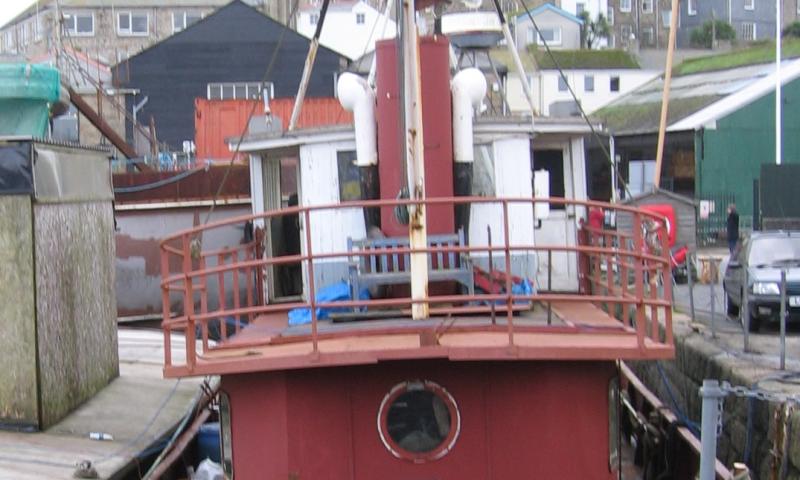 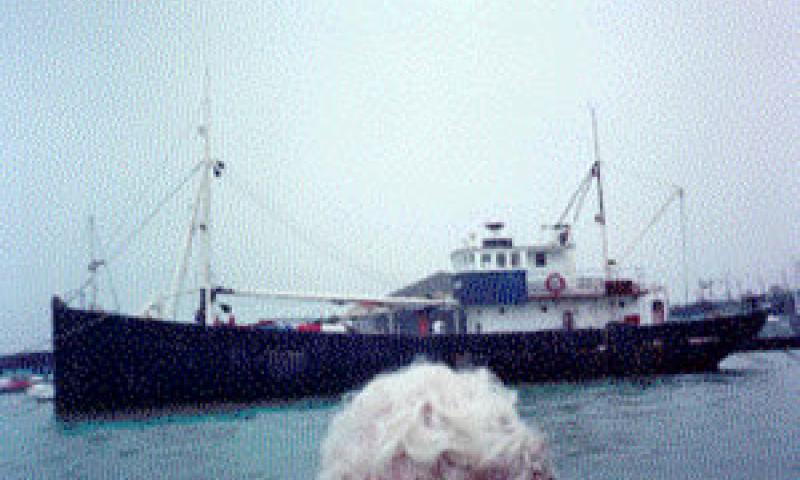 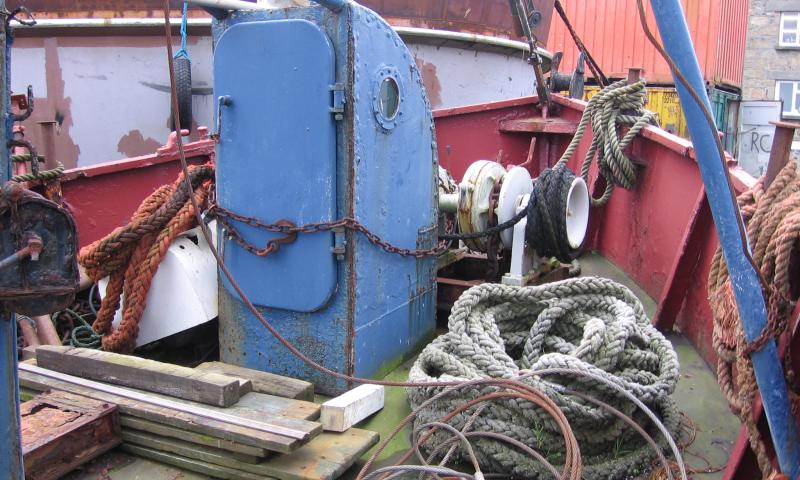 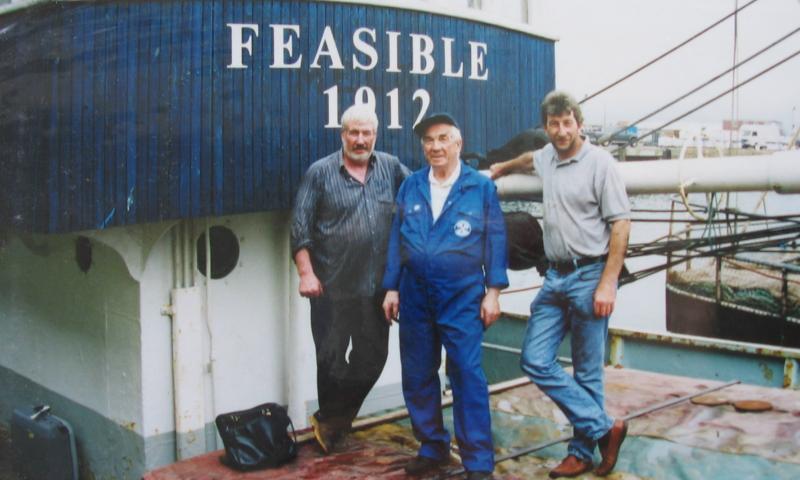 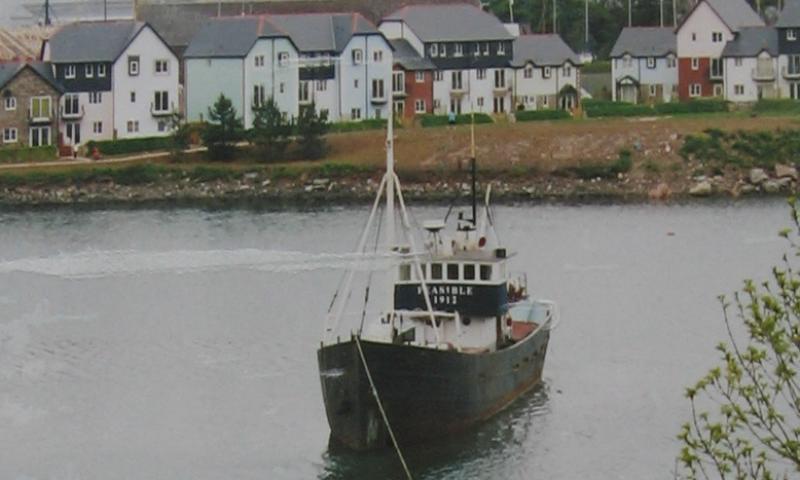 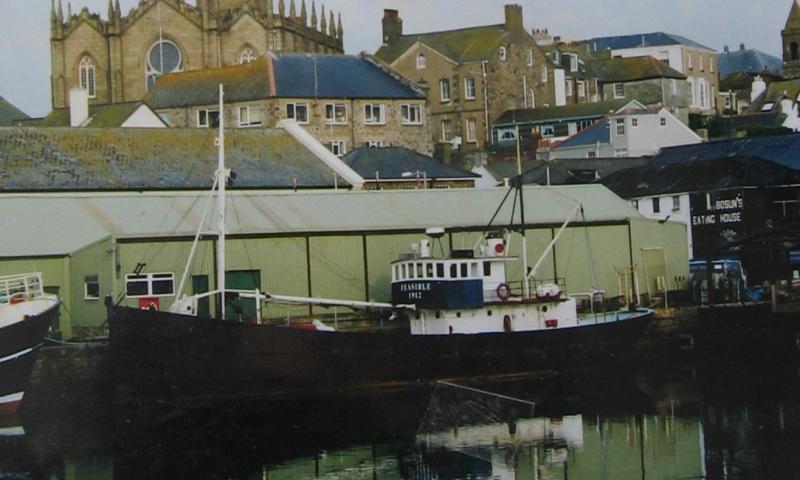 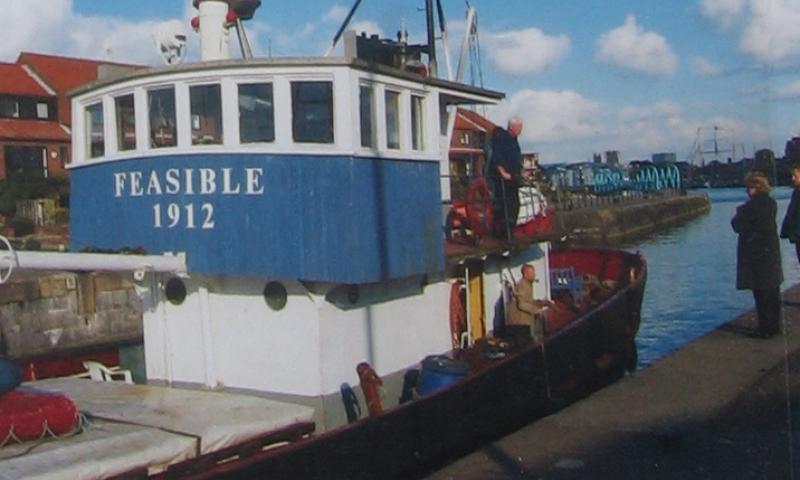 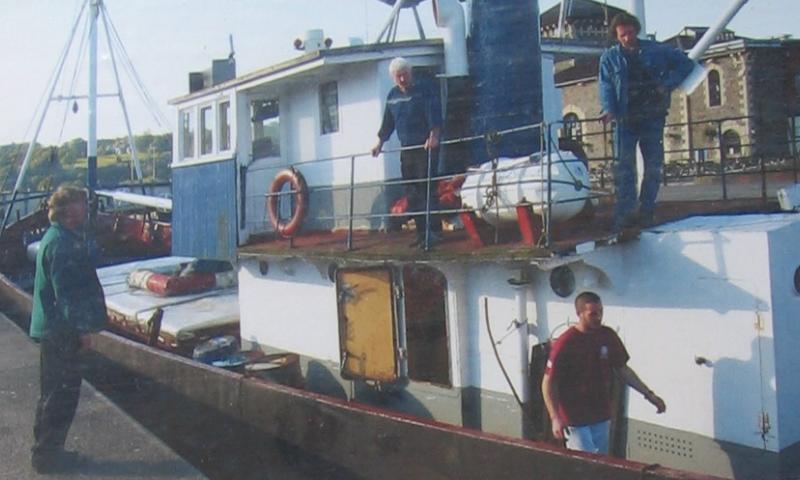 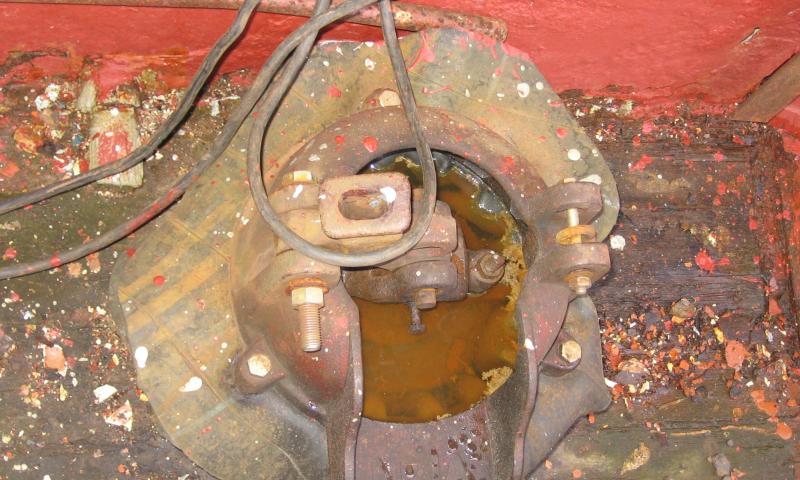 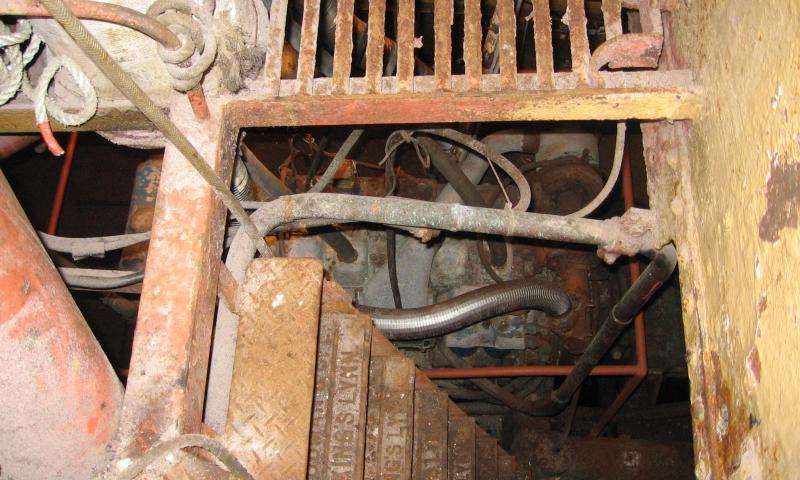 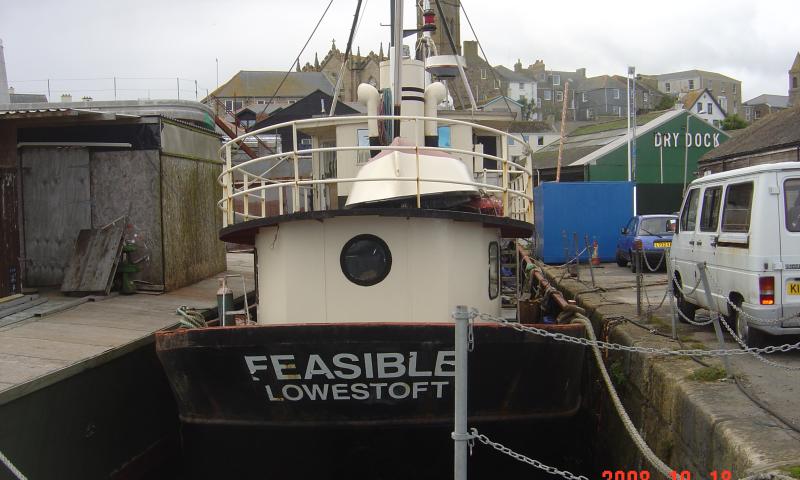 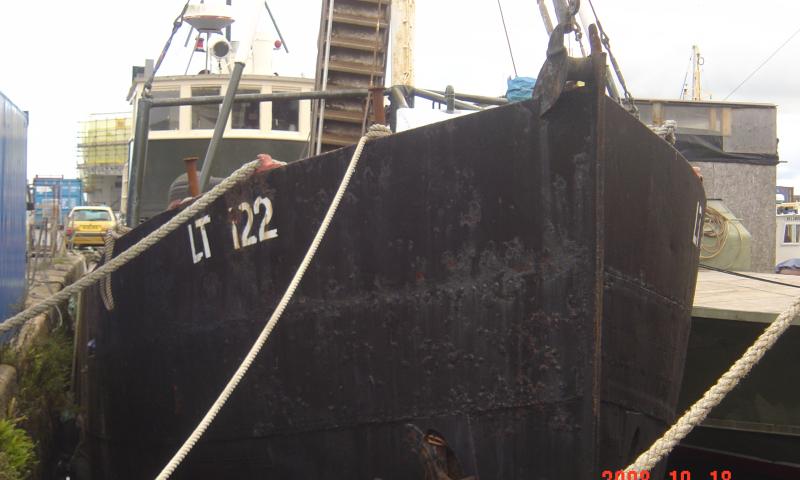 FEASIBLE was built as a steam drifter for herring fishing, and she still has her original steam winches and derricks. Her riveted steel hull is also original. There have however been a large number of modifications in welded steel since, including bulwarks, hatch, and a large deckhouse in place of the engine room. FEASIBLE has three decks and she was originally fitted with two masts. She was later converted to a side trawler, and then to diesel propulsion with a 3-cylinder Kromhout 2-stroke diesel, a clutch and a controllable-pitch propeller. This engine was subsequently replaced, first with a diesel Bruvnoll 3-cylinder 220 horse-power engine and then with a Rolls Royce engine from a trawler. There were plans to return her to steam propulsion, but in 2007, her engine was given back to its country of origin, Norway, for use in the Bruvnoll Museum.

FEASIBLE has Scottish associations, being built in 1912 by John Duthie of Aberdeen. She is significant for being called up for service in both World Wars, and was engaged in incidents around the British Isles and beyond during her working life. In the First World War she was requisitioned for use as a patrol boat and in 1917 took part in the sinking of U-48 in the North Sea, during which she took one prisoner on board.  Once demobilised, she went back to herring fishing, later suffering damage in four separate accidents in North Holland, Scotland, Ireland and Pembrokeshire, losing a crewman on the last occasion in heavy seas. During the Second World War, FEASIBLE was again requisitioned by the Admiralty, this time as a minesweeper. She took part in the Dunkirk Evacuation 1940, picking up soldiers from smaller vessels who were ferrying them out from the beaches, and her engineer, A.A. Storr, was later decorated with the Distinguished Service Medal. On one of her returns to Ramsgate FEASIBLE was bombed and disabled. After the Second World War, she was sold to Norway, where she was operated as a coaster and given the name MELOY after an island above the Arctic Circle. She has been recorded on the National Register of Historic Vessels since 1997 and is part of the National Historic Fleet.

The steam drifter, of which FEASIBLE is a rare surviving example, represented the vanguard of the transformation of the British fishing fleet from sail to steam.  Very early steam drifters were wooden and some were converted sailing vessels.  The purpose-built boats were a rather different shape, but their immediate ancestry in the world of sail is very obvious.  Drifters lay for hours at a time to lines of nets of immense length and because of the often poor conditions, it was essential that they could keep their bows fully up to the approaching seas.  To assist this process, draught was greater aft than forward, without compromising the buoyancy and power of the bow sections.  Steam drifters featured a rudimentary form of the old sailing rig; most drifters had been luggers with big foremasts set well forward in the bows.  These, if left standing, created sufficient windage to compromise the boat’s ability to lie head to wind.  The masts, some of which weighed up to a ton, were therefore lowered at sea each night as the boats lay to the nets.  On sailing boats, they were lowered into a crutch which was shipped in massive brackets well aft.  On steam drifters the masts would be lowered into a stout chock situated at the forward end of the wheelhouse roof.  Ample evidence for this practice is provided by contemporary photographs.  The fairlead arrangements were of great interest, as were the steam capstans that allowed crews to lower the massive masts and handle the colossal weight of nets.  Much of this detail on FEASIBLE appears to have been subsumed by the conversions which have marked her life, but there is no mistaking the distinctive shape of her powerful hull.  FEASIBLE is currently undergoing conservation work at Bristol.

FEASIBLE was built in 1912 by John Duthie of Aberdeen as a steam drifter and still has her original steam winches and derricks. She was called up for service as a patrol boat in World War I and assisted in the destruction of U-Boat 48 on 24 November 1917. Once demobilised, she went back to herring fishing. She had no less than five accidents including a collision in heavy seas, on one occasion losing a crew member overboard. At the outset of World War II she was again requisitioned by the Admiralty, this time as a minesweeper. Commanded by CC Findlay RNR, under orders from HMS, she was ordered to Dunkirk, where she picked up soldiers from smaller vessels who were ferrying them out from the beaches. Her engineer, A A Storr, was later decorated with the Distinguished Service Medal. On one of her returns to Ramsgate, FEASIBLE was bombed and disabled.

After the war, she was sold to Norway and given the name MELOY after an island above the Arctic Circle. She was also fitted with a 22hp diesel engine. Arctic Shipping of Cowes, found her 70 miles from the sea in Veafjord and brought her across the North Sea from Bergen to Cowes under her own power. A snapshot of the life and times of a steam drifter/trawler is provided by the personal log of Roy Jenner Breach during a voyage to the West Coast of Ireland in March 1937. He sailed on one of a fleet of 9 fishing vessels under the ownership of his father, John Victor Breach. FEASIBLE was one of this fleet. Leaving Lowestoft on 24 March the fleet tracked north. The log notes 'very impressive to see vessels under one ownership and newly painted in owners' colours steaming in company.' The first port of call was Hartlepool for bunkers on 25 March and Aberdeen was abeam at 3pm on 26 March; the potentially dangerous waters of the Pentland Firth and Cape Wrath were navigated the same night and the fleet arrived at Mallaig for bunkers at 10pm on 27 March. The fleet had run down the West Coast of Scotland partially under the shelter of the Western Isles and the Isle of Skye. Now they headed west into the open Atlantic Ocean and abeam of Aran Island off Donegal they commenced fishing: It was now 29 March and had taken them 5 days to reach their fishing grounds. The log tells that one of the vessels was appointed 'Admiral', co-ordinating the fishing and designating one of the vessels to be 'fleet carrier' for the day. During 30 March, weather conditions worsened and the fleet ran for cover in Killybegs where their catch of herring was sold by a local agent. Leaving the next day, they continued fishing for 4 more days. They then retraced their steps round Malin Head and to Ayr in Scotland where on 4 April, fish was landed and the log ends. It is assumed that Roy Breach left the fleet at Ayr and returned to Lowestoft. In 1937, fishing lacked technology and choosing fishing grounds was by visual observation and the knowledge of skippers; frequent calls had to be made at ports to take on coal bunkers and navigation was less sure - the log records that on the voyage back to Ayr they were steaming on dead reckoning and later 'cruised about trying to locate our position.'

In 2007, FEASIBLE was located in Penzance harbour having been bought by her current owner in 1997 and sailed down from the Isle of Wight. Each time an attempt was made to round Land's End with her 1903 engine, it stopped and the lifeboat had to be called. Finally, the engine was given back to its country of origin; Norway, for use in the Bruvnoll Museum. The owner has plans to restore FEASIBLE, but is currently awaiting funding.