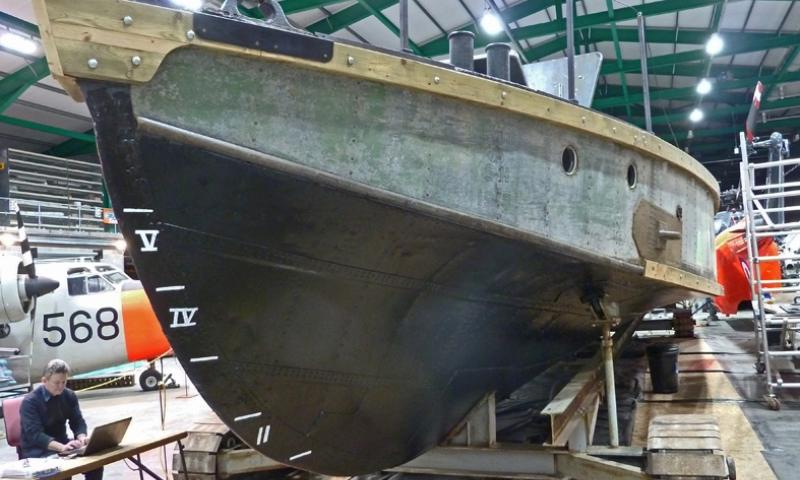 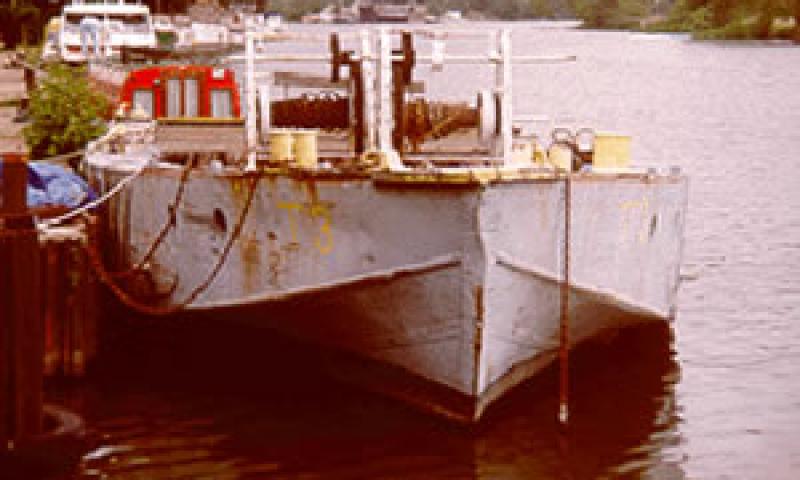 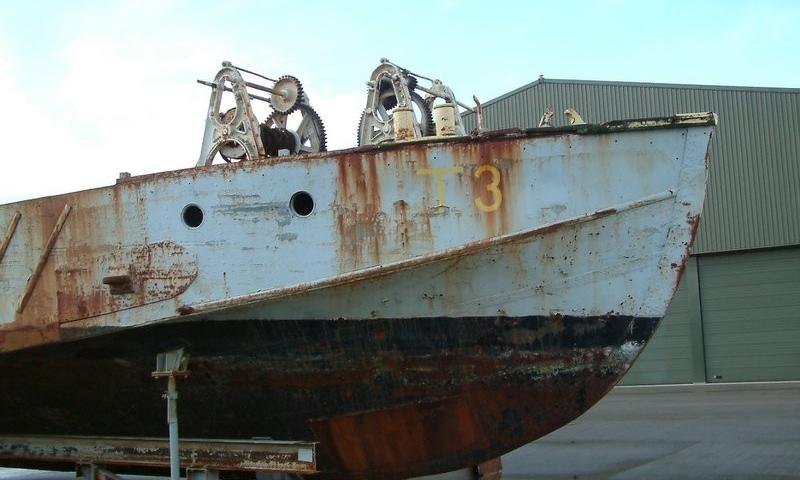 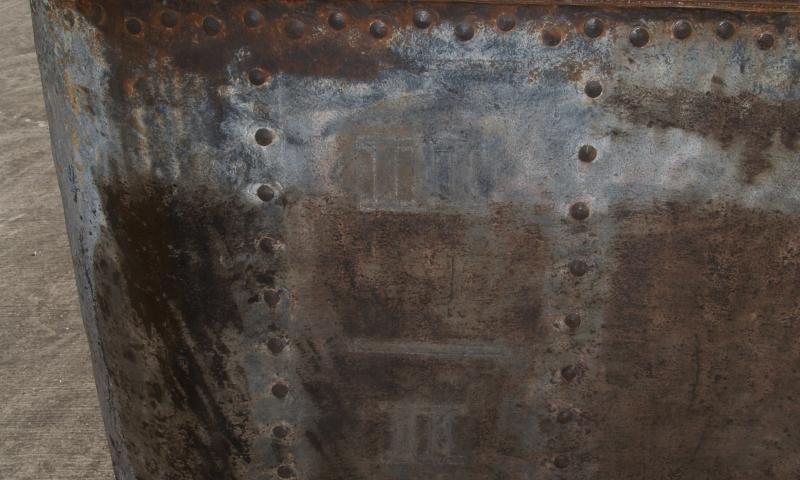 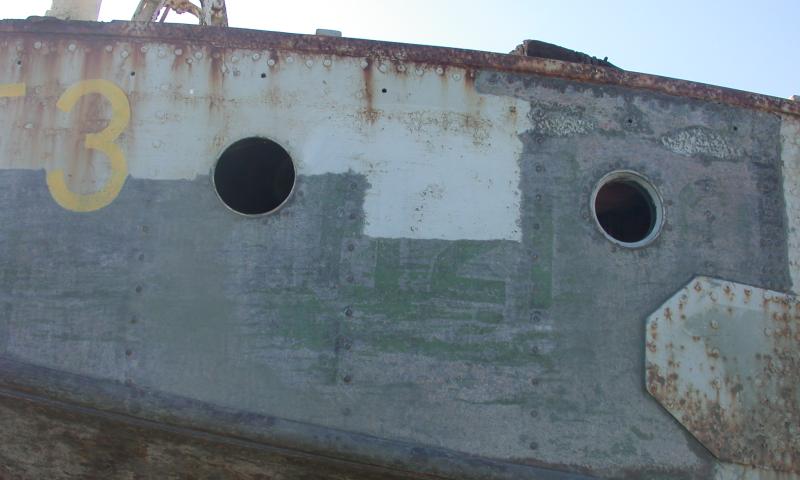 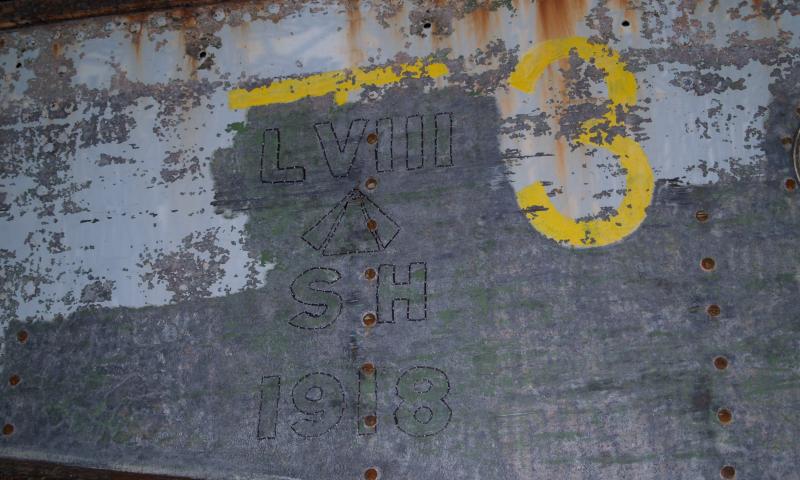 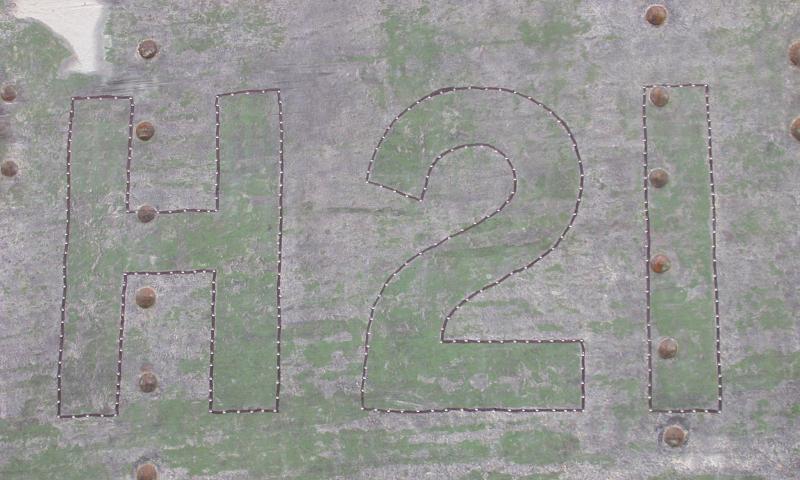 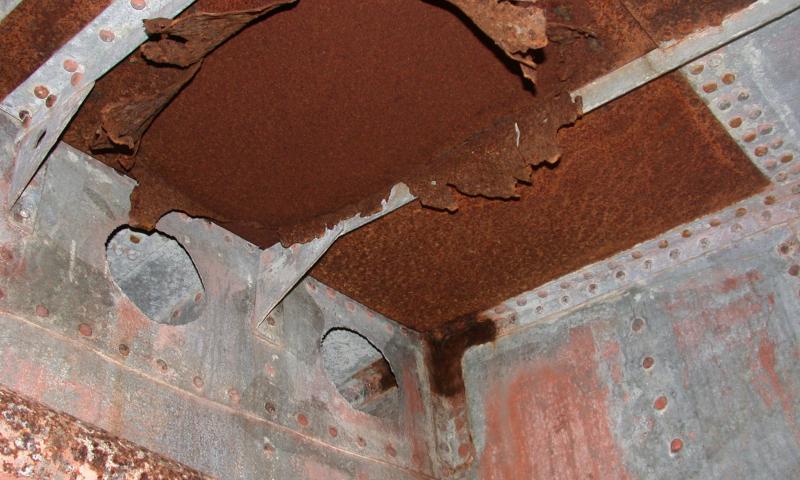 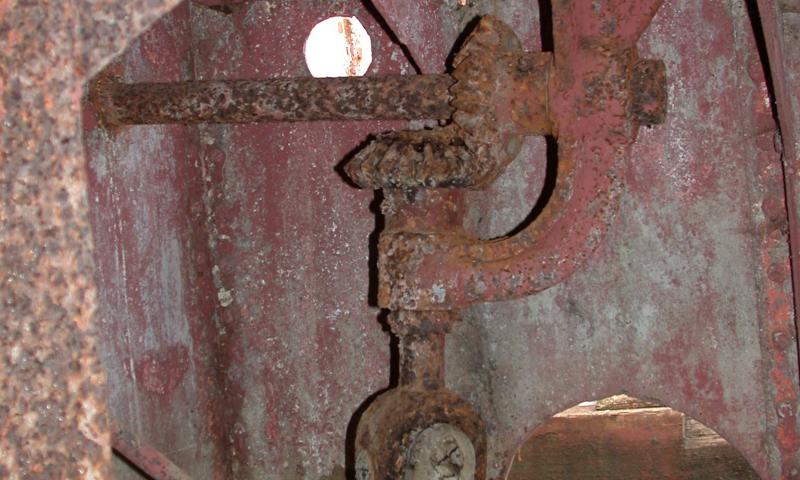 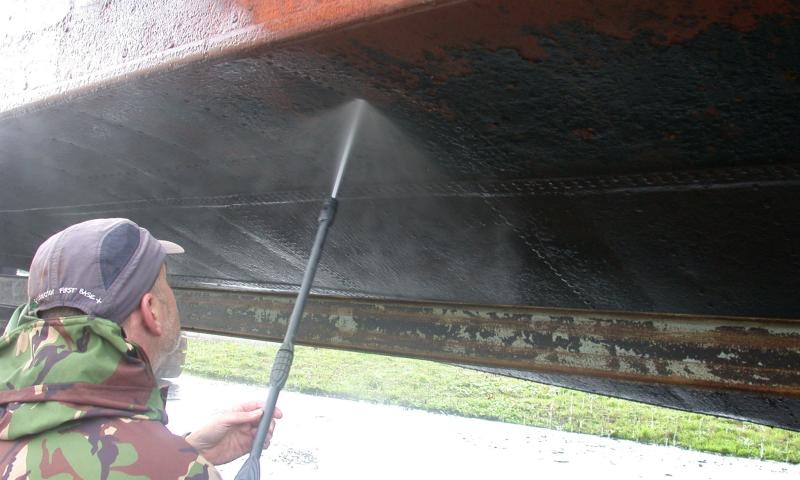 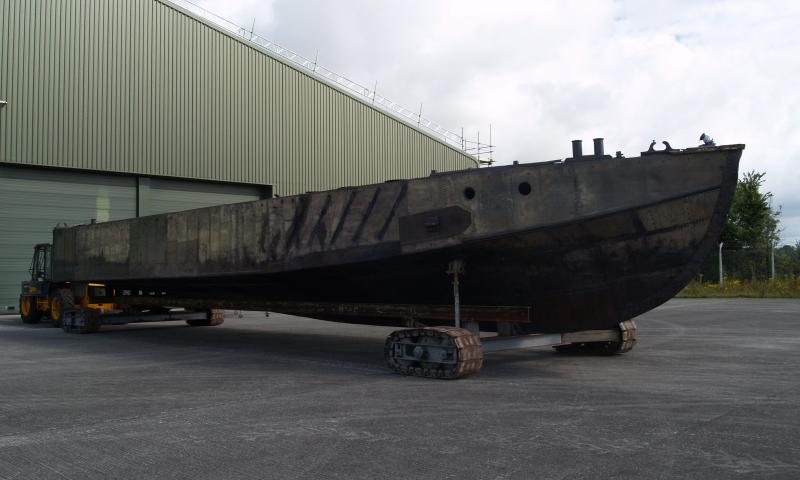 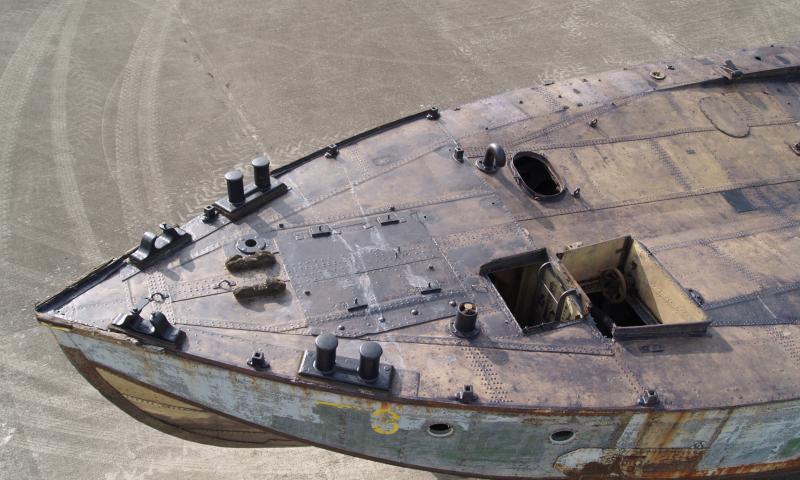 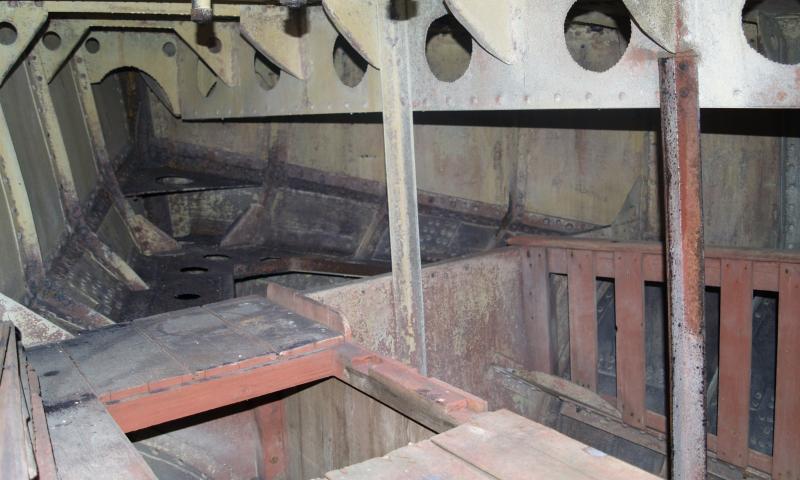 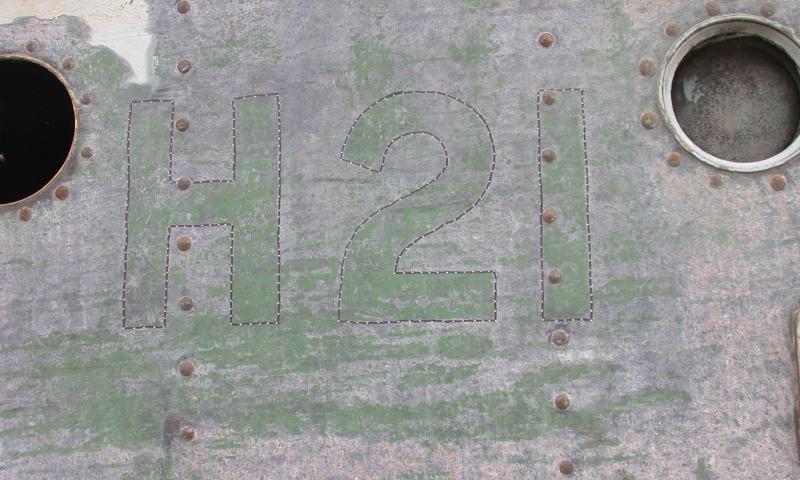 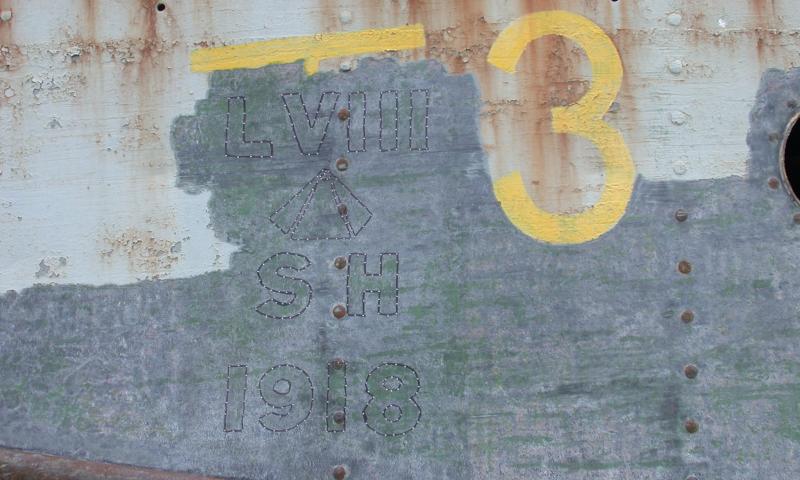 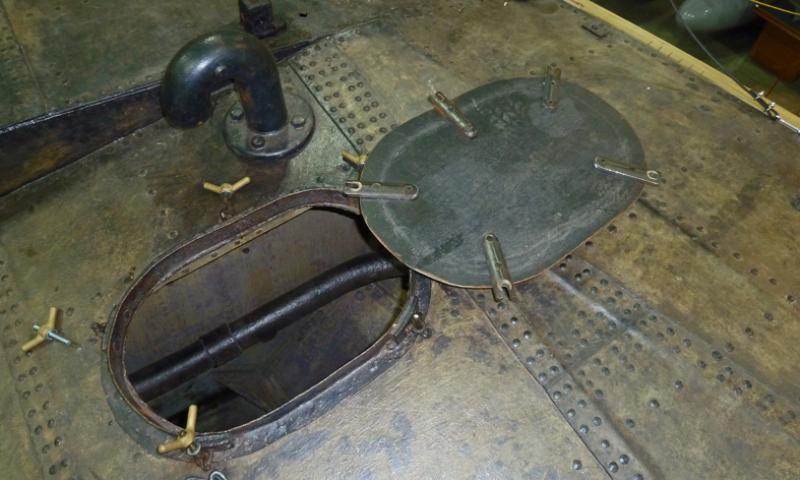 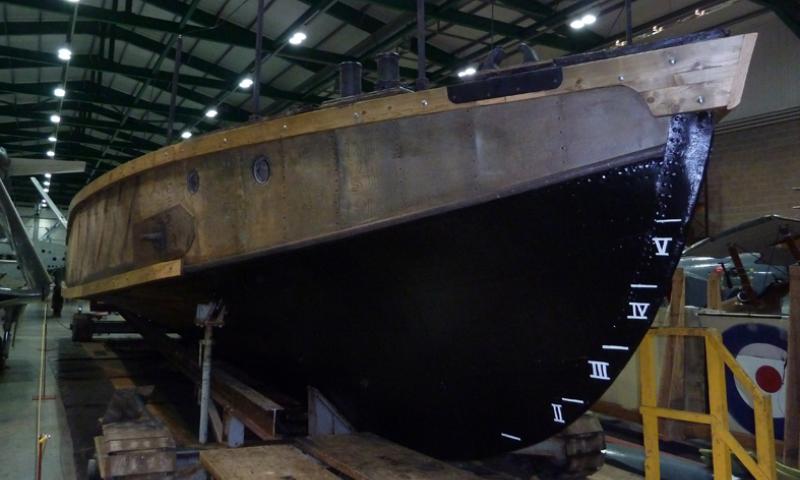 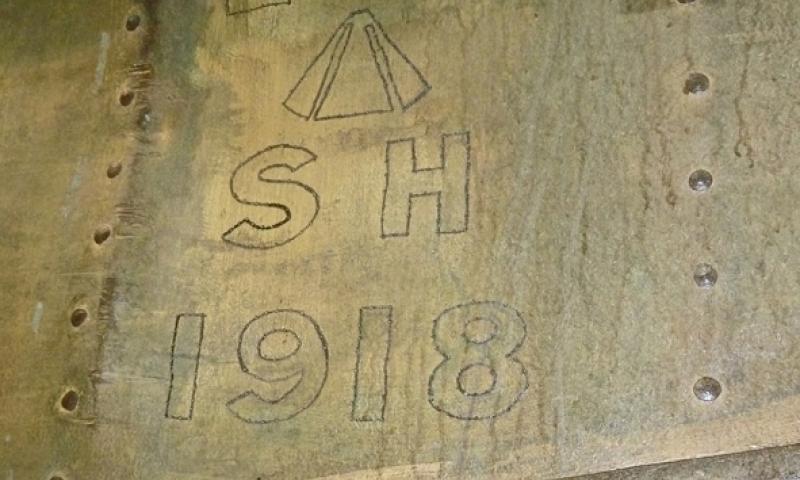 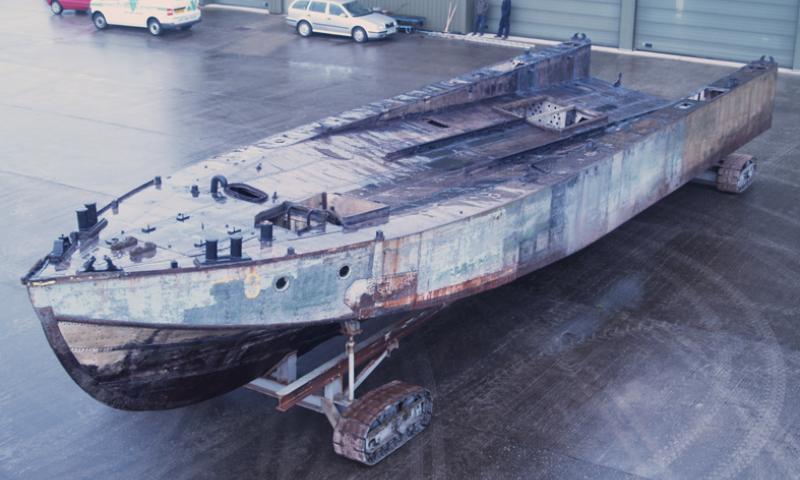 SEAPLANE LIGHTER H 21 is now the only surviving substantially complete seaplane lighter. Her structure is unique, particularly the combination of a fast planing hull shape with a semi-submersible docking bay. Some of the equipment used for flooding and blowing her ballast tanks is still in place. Her hull is made of galvanised steel plates riveted or welded together. It was designed so that, at high speed, the bow wave broke sideways, keeping aircraft wings dry. H 21 was of monohull construction with a pointed bow and a single ‘flying-off deck’, of all timber construction, probably pine, with the various sections fastened together with steel bolts and fittings. The deck planking runs fore and aft and consists of 9 inch wide by 2 inch thick plank sections. She remains in her original configuration, being around 90% original, and her condition is described as very good. Old paint and corrosion were removed in 1999, revealing that her original colour was mid green. Many of her original fittings are intact, and the Kingston type valve, used to open the main flooding chambers in the vessel, is still functional despite being badly corroded. As a lighter, H 21 was normally towed by a destroyer and had no means of propelling herself.

SEAPLANE LIGHTERH 21 was designed by a serving Naval Officer for a specific purpose, which was to extend the range of the successful Felixstowe flying boats by loading them onto a lighter which could be towed  at  high speed to a launch point close to the German coast. Several of the 30 lighters built to this design were used to carry and launch a single high performance fighter aircraft as a defence  against the high flying Zeppelins used by the German Navy for reconnaissance over the North Sea during the First World War.  Lighters were modified during 1918 by being fitted with a temporary wooden flying-off deck. One successful attack was made by Lt Culley and resulted in the destruction of a Zeppelin in 1918. The use of flying-off platforms on cruisers and later on towed lighters, was an attempt, prior to the development of aircraft carriers capable of flying off and landing their aircraft, to provide air defence at the point of need at sea.

There was no direct aviation development of the towed lighters, except that similar emergency measures were introduced in the Second World War to counter the threat posed by the FockeWulf Condors operating over the Atlantic in 1941. Short term defence was provided by fitting merchant ships with catapult-launched Hurricane fighters until cheap escort carriers could be attached to convoys.

Initially conceived as a means of towing a large flying boat at high speed behind a destroyer in the North Sea, SEAPLANE LIGHTER H 21’s broad beamed hull, which could be ballasted down to load and unload the flying boat, was given an underwater shape akin to that of a fast motor boat. The original hull shape was modified as the result of tank tests which showed that when towed behind a destroyer at 30 knots the original hull form would throw up a solid sheet of spray that could damage the wings of the flying boat. As built in 1918 H 21’s shape was ideal for her role. The unique semi-submersible hull form of the lighter, initially the combination of a simple floating dock and a seaworthy hull, has been developed over the years into the highly successful Landing Ship Docks and semi-submersible load carriers of today.  SEAPLANE LIGHTER H21 is now a static exhibit in the Fleet Air Arm Museum.

Before ships and techniques were developed to allow aircraft to take off and land at sea, the Royal Naval Air Service used seaplane lighters to support seaborne aircraft operations. These lighters were towed behind warships at speeds of up to 30 knots and were used to operate both flying boats (Curtiss H12) and fighter aircraft (Sopwith Camel). For flying boats the aircraft was loaded onto a hinged trolley ashore and embarked from a slipway to rails on the vessel and then lashed down.

At sea the lighter had the capability of being flooded up to embark and disembark the aircraft and then pumped out using onboard compressed air bottles to restore buoyancy. There was sufficient compressed air to perform two complete operations. For fighter aircraft the lighters were modified by fitting an elevated inclined wooden deck from which the aircraft took off. There was no way of landing so the aircraft either had to land ashore or ditch alongside the ship.

Seaplane Lighter H21 was designed by Thornycroft and built by the Royal Engineers in 1918 at Richborough, a port constructed by them near Sandwich, Kent, to re-supply the armies fighting in France during the First World War. The design included an impressive high speed bow. 50 lighters were ordered and building ceased at H32 due to the end of the war. The first 25 had galvanised steel hulls, the remainder steel to reduce cost.

Currently no records have been found of any active wartime service or the configuration in which she was operated, but research continues. The next known record is that she was operated by Thornycroft as a cargo barge on the River Thames from Platts-Eyott Island, Sunbury from 1932 to 1966 with a registration number of T3.

In 2009, she was undergoing this work in stages with careful examination of every area of the craft from its paintwork remnants (it appears that H21 was originally green and not grey) to all of its hardware and fittings. Sourcing a reasonable set of original Thornycroft plans and drawings enabled the owners to compare design and build differences between the original Thornycroft prototypes and production changes by the stage of late 1917 to 1918. The Port of registration (marked SH on the plate work) is now known to be Sandwich Haven (not Southampton as previously thought) and fits with her construction at Richborough. Some fittings have been replaced using the factory drawings to follow the correct detail, although overall the lighter has most fittings and detailing that were able to be saved and conserved.

Work will continue in phases based around funding, active works and research, with the overall aim to bring the lighter to a presentable exhibition standard, but retaining as much of her original condition as possible, including external finishes. She has now reverted to her original name of Seaplane Lighter H21.