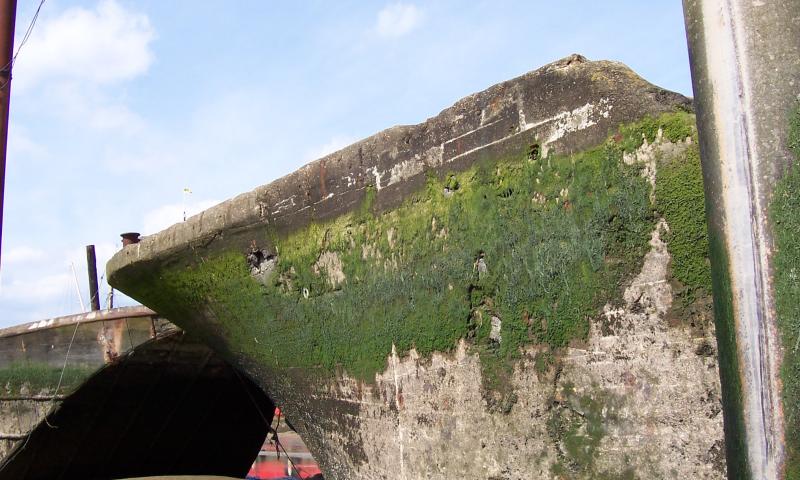 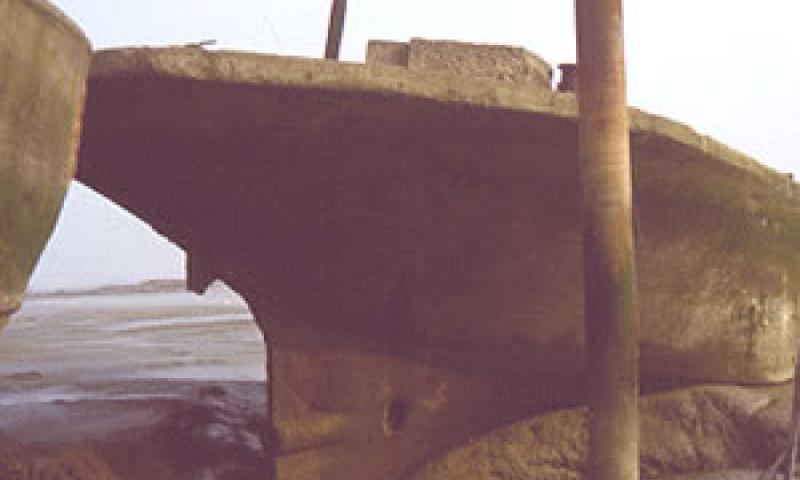 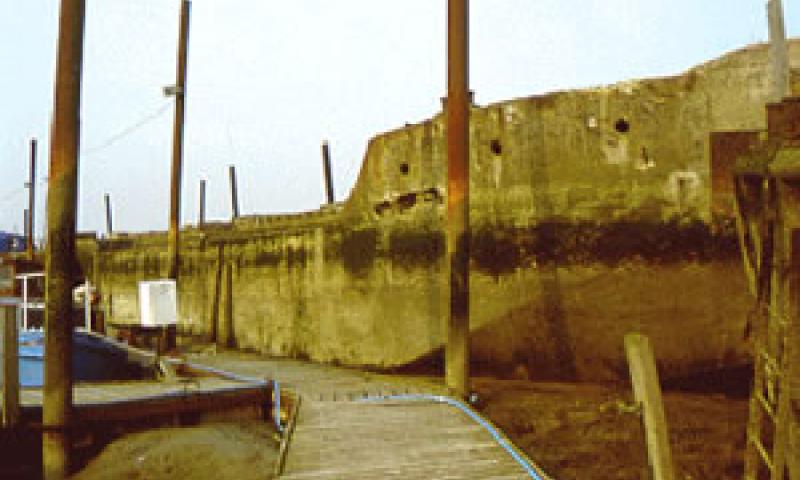 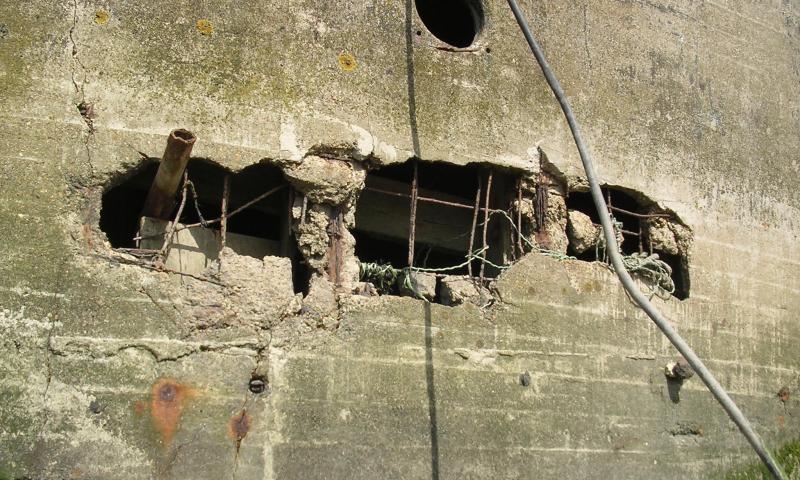 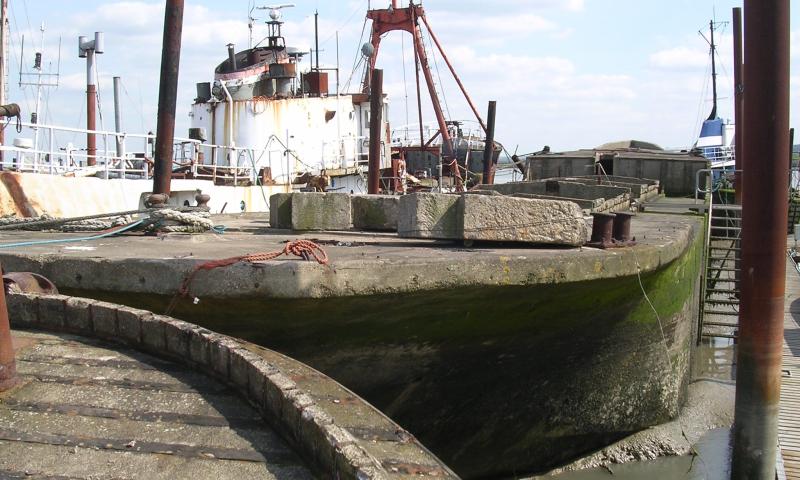 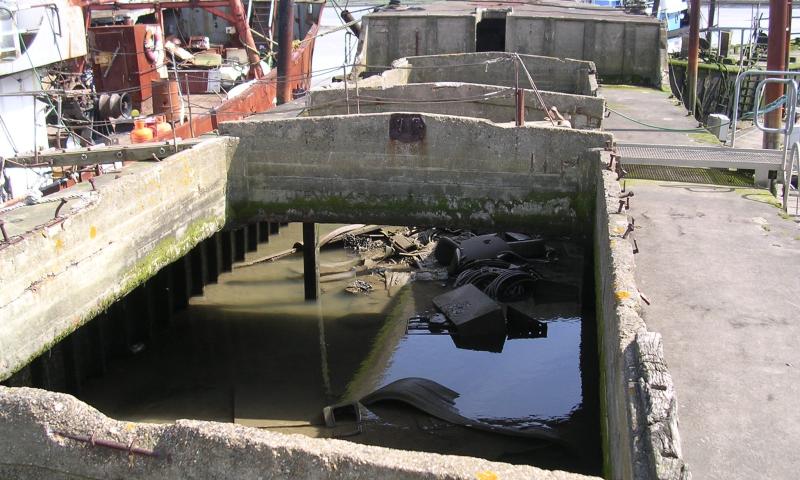 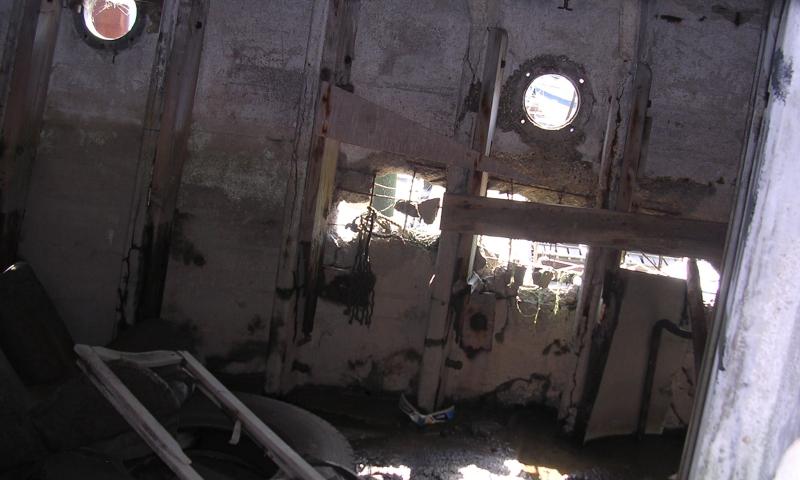 The two Faversham coasters had a loaded displacement of 640 tons, with a hold capacity of 17,320 cubic feet. The bare hull weighed 290 tons and the ratio of deadweight to displacement was 44.5 per cent. The weight of the three-inch thick hull being 143 lbs. per cubic foot, plus the steel reinforcements.

Both vessels were rigged as three-masted schooners, with gaff and boom sails but no topsails. MOLLIETTE had a short fixed bow-sprit and set a foresail and jib. VIOLETTE, although she set a foresail from her stem-head, did not have a bowsprit.

Work on MOLLIETTE started on 2 September, 1918. She left on her first trials on 17 January, 1919. VIOLETTE was started on 14 March, 1919, and finished on 10 April. The engine was installed on 16 May, she sailed on trials on 5 August. Both had the same engine - a centrally situated 120 bhp, two cylinder Bolinders type M, running at 225-250 revolutions per minute. The motor winch, placed abaft the foremast, was also used to drive the windlass with a messenger chain, tension being by means of a snatch-block hung from the mast or the fore-stay.

Down below, fuel oil was carried in two circular tanks, one each side of the engine-room, resting in built-in cradles about 6ft. diameter and 10 ft. long and holding about 1,200 gallons each. Lubricating oil and paraffin were carried in square 50-gallon tanks, while about 250 gallons of fresh water was carried in a tank on deck between the two hatchways.

The crew lived forward in a foc's'le which was fitted out with pipe-cots, a wooden table and two forms, a wash-basin in a wooden frame, with a bucket under it for waste water, a water-can and a food and clothes locker for each man. There was a stove, and bulkhead-type oil lamps. Four or five men lived forward and the three officers aft in a wooden deck-house, which was bolted to the concrete deck. Here each man had a separate cabin, lit by a gimbal lamp, with a bunk (drawers underneath), a folding wash-basin, a locker with a padded top, a wardrobe cupboard, and a rack with water-bottle and glasses. The mess-room had a table, a locker seat with a form opposite and was heated by a Tortoise stove. A galley and a lamp-room and wc completed the accommodation aft.

On deck she had an open wheel-house, with bridge wings, and the boats were carried on either side of the deck-house, launched by davits. One was a transom-sterned jolly-boat, and the other the conventional double-ended lifeboat.

In one of the photographs of the VIOLETTE there is a brail winch visible at the foot of the mainmast, but this was probably for raising the gaff or working a cargo boom. Presumably the mizzen, a much smaller sail, had its gaff raised by hand purchase.

The VIOLETTE proved troublesome from the start of her career. After running trials off Gravesend on 5 August, 1919, she was not accepted by her owners, but loaded hardcore up-river at Erith at Cory's wharf, and laid at anchor until some time in September. Then she sailed for Rochester, proceeding, for some reason, via the Swale with a stop at Harty Ferry.

Among her mis-adventures was a collision with Southend Pier. It happened on 18 January 1921 while the vessel, under the command of Captain Knott of Dover, was proceeding from Antwerp to London with a cargo of 241 tons of iron girders and logs. It had been a bad trip anyway: she was caught out in such vile weather that she was in difficulties for 18 hours, having proceeded only 37 miles in that period although her engine was running full-out. While off Southend, the vessel became unmanageable and was driven furiously against the west side of the pier. VIOLETTE was declared a loss.

Pollock's bought the wreck and after temporary repairs she was towed to Faversham, arriving at the yard on 23 April. Her engine was removed and converted to a later type and installed in the coastal tanker STOURGATE.

After Pollock's disposed of the VIOLETTE, her hull lay on the beach at Seasalter near Whitstable and some time before World War II she was moored above Sun Pier, Chatham being fitted with tanks and used as a refuelling lighter for the New Medway Steam Packet Company.<