SS Explorer - a ship unique within the Scottish maritime heritage

The former Fishery Research Vessel, FRS Explorer, is a survivor.  She is a little-known part of the UK's maritime heritage and played a crucial role in the development of our fishing industry, our knowledge of the sea, and its ecosystem.  Created at a turning point for marine engineering (as steam gave way to diesel), she has weathered the worst of the fickle seas and escaped the scrapman's torch twice during her 61 years thus far.  She is unique, with the fit-out of a cruise liner of the day and laboratories that would not have looked out of place in a university.

The FRS Explorer, as she was then known, built to the order of the Scottish Home Department, had a primary role as a research vessel and was fitted out to the highest of standards to ensure the comfort of the scientists and seamen who served on her.  She was retrofitted with an analogue computer, one of the first civilian ships so equipped.

She operated in the waters around Scotland, the Barents Sea, Spitzbergen and as far south as the south coast of Ireland.  She was built in Aberdeen and operated from there under the direction of the Torry Fisheries Marine Laboratory, but often returned to Leith between cruises, which typically lasted about a month.
----------
Facts about SS Explorer

- Explorer was Scotland's first purpose built fisheries research vessel and was the lead research facility in this field for 28 years between 1956 and 1984.

- She was one of the last ships built in Scotland equipped with a traditional (reciprocating) steam engine and was the last such vessel registered to the port of Leith.

- She is the last known Scottish-built side trawler ('sidewinder') still afloat and is probably the only known steam powered sidewinder left afloat in Europe, possibly in the world.

- She was amongst the last working ships built in Scotland with a riveted steel hull, but paradoxically has an aluminium superstructure - an advanced feature for her time.

Explorer is currently berthed in Leith, her original port of registry. Since decommissioning in 1984, the ship has had a chequered history including two close encounters with ship breakers. But there is now a renewed impetus to promote a programme to restore the vessel.
------------
The SS Explorer Preservation Society (SSEPS)

The SSEPS was formed in 1995, as a direct result of enthusiasts becoming aware of the SS Explorer being sold for scrap for a second time.  Many seafarers and locals from the North East of Scotland in addition to several former crew members joined together and formed the Society which now owns and is currently restoring the SS Explorer to her former glory. The society has a constitution and is a registered Scottish Charity.  Within this framework a Company Limited by Guarantee (Registered in Scotland No 156992) was formed responsible for the restoration project and management of the society through a board of approved directors. The society has a Business Development Committee and a Technical Committee.

The primary aim of the SSEPS is to restore Explorer to a condition in which she can fulfil a variety of uses based around her acting as a museum amongst the other Leith and Forth estuary maritime heritage attractions. Once a technical survey of the ship is available, further restoration measures will be considered.

The SSEPS has members with specific ship repair/maintenance skills and some members who actually served on the vessel; these volunteers have worked hard over the years to hold back deterioration. However, the major restoration works will have to be carried out professionally, whilst these members continue to address some of the practical issues on board.
----------
Development Plan

The intention of the SSEPS is to restore Explorer to a static museum with a visitors centre, with the aim to restore as much of the machinery to working and running condition where possible.

An AGM will be taking place late 2019 to make this plan official.

In addition, the team are developing an educational outreach programme and have a first draft maths module called 'Navigating Maths with the SS Explorer' for local schools interest.  If this is successful, they plan to look at further lessons involving physics and engineering.

SS Explorer has teamed up with the University of Glasgow-led Summer STEM Academy, now in its third year of operation, which offers workshops on a wide variety of science and engineering topics, available online for free.  Full story here

April 2020: The second edition of the SSEPS's Technical Bulletin is now published!  In it you will find details of what has been happening engineering wise, both onboard and ashore.  The Bulletin is the best method right now of keeping members and supporters up to date with their engineering progress.  Head on over to their website here.

Summer 2019: the SSEPS has become a member of the Edinburgh Chamber of Commerce and has attended one of their networking events.

March 2019: The SSEPS received a £10,000 funding boost from the National Lottery Heritage Fund for the strengthening of the organisation itself.  While not being restored to sea going condition, their project is still estimated to cost into the million(s) mark. 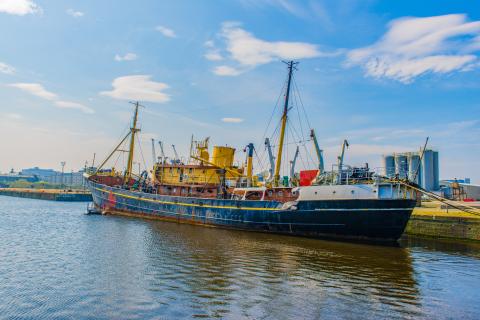