The Martyn Heighton Award for Excellence in Maritime Conservation

Martyn Heighton was the Director of NHS-UK from 2005 until his sudden death in 2016, during which time he was a passionate champion for the maritime heritage community, supporting historic vessel projects of all sizes.  Amongst many new initiatives he launched, Martyn was directly responsible for the publication of Understanding Historic Vessels - a three-volume series which looks at the methodology for recording and deconstructing historic vessels, as well as setting down key principles in ship conservation to build consistency across the sector.

The third volume, Conserving Historic Vessels, has become the bible for any historic vessel custodian embarking on the difficult journey of funding and planning a sustainable future for their craft.  It is now recognised internationally and is used by grant giving bodies, including the National Lottery Heritage Fund, as a way of determining understanding and viability in vessel-related funding applications.  It forms the core of the NHS-UK distance learning course in Historic Vessel Conservation and also underpins the NHS-UK small grants scheme, where applicants are asked to consider and state which conservation route they will be following.

Thanks, in part, to this publication the standard of conservation in the historic vessel sector is improving all the time, with some notable exemplar projects coming through.  In recognition of Martyn’s role in bringing about this change and for his tireless efforts to save vessels which would otherwise not be here today, NHS-UK launched a special award in 2019 for Excellence in Maritime Conservation.  This accolade is given to the individual, organisation or group that best demonstrates the principles set down in Conserving Historic Vessels and whose outputs the judging panel feels are most closely aligned with the dedicated and persistent approach that Martyn applied to all historic vessel projects during his lifetime.

A special trophy was commissioned for this Award using funds donated at Martyn’s memorial service.  It incorporates wood previously removed from HMS Victory was gifted to NHS-UK courtesy of the National Museum of the Royal Navy in recognition of the important advisory role which Martyn performed for the ship, serving as first chair of the HMS Victory Technical Committee.  The trophy was fashioned by Andy Peters of Maritima Woodcarving.

The first winner of this prestigious award in 2019 was Lakeland Arts, Windermere Jetty Museum, with the Excelsior Trust also being highly commended for its entry. Successful recipients are presented with the trophy at the NHS-UK annual Awards Ceremony where they are photographed with it and subsequently have their names engraved upon the winners’ plaque.  The trophy remains in the care of NHS-UK throughout the year, but winners will also receive a keep-sake in recognition of their success which, in 2020, will comprise a copper ingot from HMS Victory, see: https://shop.nmrn.org.uk/products/hms-victory-copper-ingot.

The Excellence in Maritime Conservation Award is open for nominations from 1st June to the 14th August 2020.  Entries can be submitted via the online form

Please note that any data supplied with your nomination may be held by NHS-UK in perpetuity for archive purposes and kept on our electronic record system which is only accessible by authorised staff.  Submissions will be shared with our judging panel.  If you wish your details to be removed from our system at any time, please email: info@nationalhistoricships.org.uk.

Nominations are welcomed for individuals, organisations or groups believed to have contributed to the successful conservation of a historic vessel on the National Historic Ship Registers.  This can be as part of a major project, or for the continuation of ongoing conservation relating to the vessel’s daily use, maintenance and sustainability.  The Award is open to all forms of vessel custodian such as private owners, museums, charitable organisations, as well as other individuals, employees, consultants or companies who have been directly involved with conservation of a craft.

Judges will be particularly looking for nominations to demonstrate the approach that has been applied, how this has followed the principles in the NHS-UK guidance publication Conserving Historic Vessels, and how the long-term future or a permanent record of the vessel has been secured.  This may take the form of physical conservation work, a conservation plan, management of a vessel collection, creating a vessel record, or implementing a structured deconstruction process to NHS-UK guidelines.

Nominations will be considered by a panel of four judges, chosen for their experience and knowledge of the maritime heritage sector, as well as the fact that they worked closely with Martyn Heighton during his career:

Hannah Cunliffe
Hannah spent her childhood afloat and then set up a business as an independent maritime researcher and consultant.  She worked alongside Martyn Heighton at NHS-UK for ten years before being appointed as his successor in 2017.

Alan Watson
Alan is a former Merchant Navy Electronics Officer and now Chairman of the Medusa Trust. He is also a trustee of the Coastal Forces Trust, and a liveryman of the Worshipful Company of Shipwrights.

Stephen Beresford
Stephen is the Senior Conservation Boatbuilder at Windermere Jetty Museum - the first recipient of the Martyn Heighton Award for Excellence in Maritime Conservation.  He is a chartered engineer, has a master’s degree in manufacturing and graduated from the International Boatbuilding Training College, Lowestoft with a distinction in practical boatbuilding. 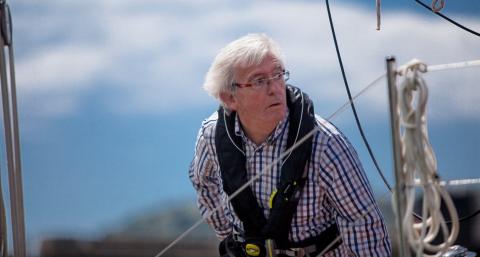