Even after growing up in a city right on the coastline, the maritime heritage sector was not a career avenue I had even considered to be a possibility until after leaving fulltime education. I knew that I wanted to do something practical, like mechanics or carpentry, yet I struggled finding a feasible way to retrain. It wasn’t until after my first sail on a wooden boat that I was told that some people do this for a living. So for the next few years after that sail, I worked for months so that I could sail for weeks.

Some jobs less glamorous than others and constantly changing workplaces. This eventually grew quite tiresome and I had no clear path. Even though I had racked up some impressive trips in my log, I couldn’t quite seem to make any sort of jump into the industry. My next decision after that was to find work in boatyards with the little knowledge I had on refit work. Here I worked with a local sailing association working on their traditional vessels, and then I worked for a general yacht repair company. This work was substantially more fulfilling than most of my previous jobs, and during this time I found out about this course.

Read more about the Sea-Change Sailing Trust and the opportunities available as part of the SHTP 2 project.

UPDATE SEPTEMBER - Some leatherwork I have done, protecting the seizing and the fores’l bowline...Read more

UPDATE AUGUST 2020 - To kick the month off, I had a bamboo lug split on me whilst commuting to the quay for some supplies...Read more

UPDATE JULY 2020 - This month I have managed to sail on a barge and a smack for the first time...Read more

UPDATE JUNE 2020 - This month I was also able to go up aloft on the Cutty Sark’s rig with TS Rigging....

UPDATE MAY 2020 - As we had taken both Blue Mermaid and Sallie back to their moorings we we’re able to continue working on them over several nights, albeit at a slower pace....Read more

UPDATE APRIL 2020 -  I was asked to create a leather chafe stopper around the eye splice that was eating away at the seizing. This was a pleasant opportunity to practise some of the tricks learnt at IBTC Lowestoft...

UPDATE MARCH 2020 - This month I have been spending most of my time carrying on with the brightworks and paint which takes time if you are to do a prop’r job...Read more

UPDATE DECEMBER 2019 - JAN 2020 - Having wanted to be a student at Lowestoft International Boatbuilding Training College for a few years, it felt a great relief to finally arrive here... Read more

UPDATE OCTOBER 2019 - Even after growing up in a city right on the coastline, the maritime heritage sector was not a career avenue I had even considered to be a possibility until after leaving full-time education...Read more 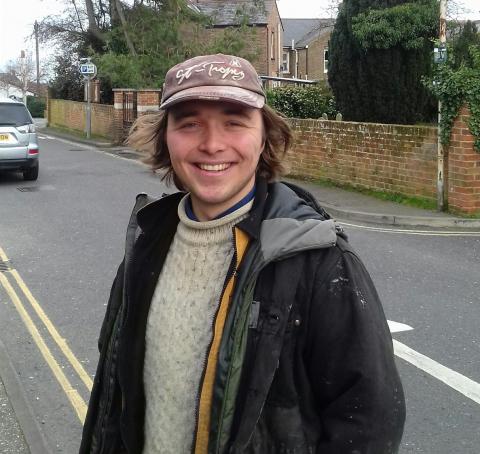