Teymour joins the project having gained a range of experience both as a volunteer and crew over the past few years with Trinity Sailing and rigging with NMRN Portsmouth. Through these experiences he has developed a passion for traditional vessels and rigging and is looking forward to developing many additional practical skills through the traineeship and sailing with Jolie Brise.

I first heard about the Shipshape project during its first iteration in 2013, when I was doing my Duke of Edinburgh residential aboard the gaff cutter Golden Vanity.  Ships are living and breathing objects that require a lot of love and attention, and  at this time I certainly didn't know anything about it. However, I quickly got very interested, learning all the basic knots and doing lots of brass polishing :) I had such a blast that I came on a trip once more aboard Leader in the Tall Ships races 2014. After that I became a volunteer, and that was the beginning; I was hooked into traditional boats and my passionate hobby started. I became an avid volunteer working on the boats as much as I could with restraints from uni schedule and availability aboard the vessels. Then I decided to drop my path to become a computer programmer and pursue my career within the sail training and traditional boat world.

Read more about Jolie Brise, Dauntsey's School sailing Club and the opportunities available as part of the SHTP 2 project.

UPDATE JANUARY BLOG 2020 - After a very pleasant and chilled out Christmas break it was time to finally begin our last six weeks at IBTC...Read more

UPDATE NOV 2019 - DEC 2019 - From the first year trainees – and a few others I’ve met since being accepted onto SHTP as a trainee...Read more

UPDATE OCTOBER 2019 - Back in Portsmouth we met everyone in Boathouse 4 within the grounds of the NMRN, a place I was familiar with since I had worked on HMS Warrior as a rigger previously...Read more 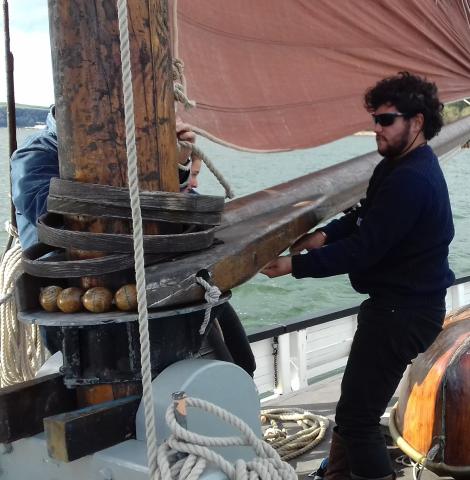